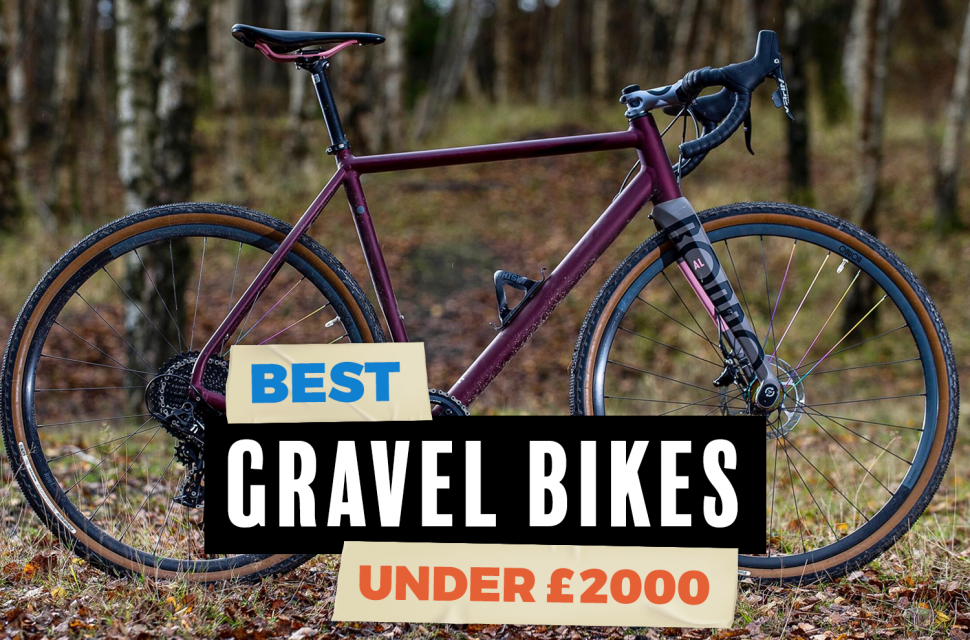 If you're after a super-versatile drop-bar bike priced between £1,000 and £2,000, we might have the answer in our roundup of all the best gravel bikes we have tested in this price bracket. We've tried and tested all of these bikes, from the capable adventure steeds to the all-rounders, and these are our top-rated. 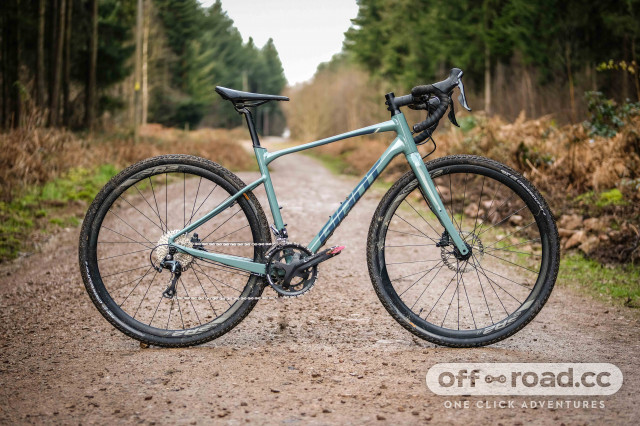 The Giant Revolt 1 is a decent gravel and adventure bike at a respectable price. If you can cope with the odd looks and adequate performance of Giant's unique Conduct braking system, you’re rewarded with a quality alloy frame, a carbon fork, and plenty of scope for adventures.​ The Revolt 1 nails its brief as a versatile bike: it has the ability to be a speedy commuter, a bag-laden gravel machine or a good time on the singletrack – just take your pick come the weekend. At £300 less than the Revolt 0 and only just over a £1000, it's also a good-value entry point to gravel biking, touring or fast commuting that's easily upgradeable should you really catch the bug. 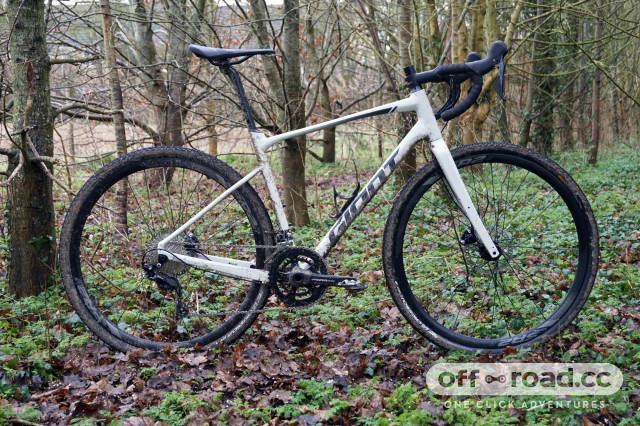 For £1,499 the Giant Revolt 0 gravel bike offers very impressive performance on the road and in the woods, with an easy agility that makes it fun to carve through the corners. The fast-rolling tyres aren't for the committed off-roader, and the alloy frame can be a little harsh despite its carbon fork, but the Revolt 0 is a fine all-rounder – and there's nothing to hold you back on your commute or weekend road ride either. 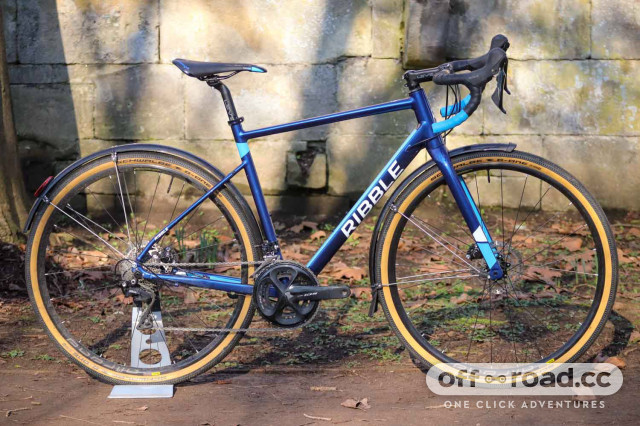 Ribble's CGR AL Shimano 105 is a hugely versatile and superb value bike for everything from gravel bashing to cyclocross and road commuting, offering a a full Shimano 105 group with hydraulic brakes for £1,399. The aluminium frame isn't overly compliant and the kit needs a few tweaks if you intend to mostly stick to dirt, but that's easy enough to custom spec it to your heart's content when you order thanks to Ribble's custom specification option. 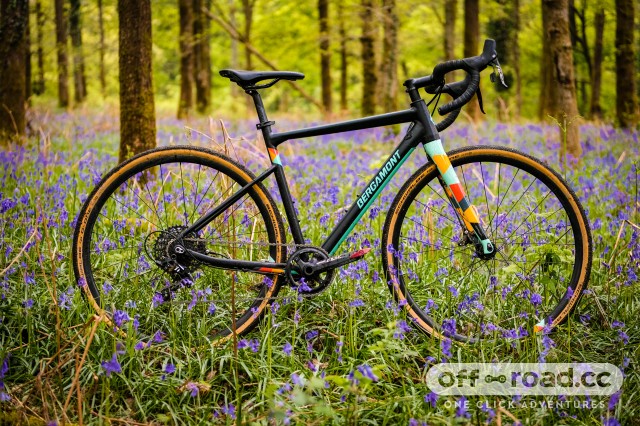 The Bergamont Grandurance 6 is a well equipped aluminium gravel bike or ‘all-road’ bike. It’s decent value and has got a striking paint job, if not paired with the most progressive geometry. This is a classic endurance road bike with allowances for gravel tyres, mudguards and racks but for the price, I think it’ll make any owner a great weekend gravel adventure bike that will commute with ease on the weekdays too. 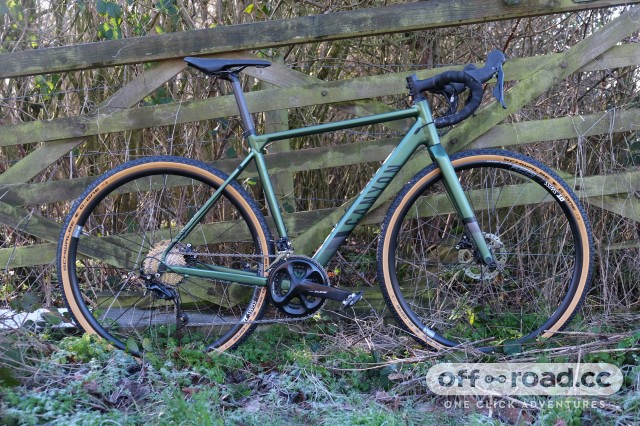 Canyon’s new aluminium Grail adventure and gravel bike is a huge amount of fun on twisty trails and is able to provide good speed on a wide variety of surfaces, from road to gravel tracks. It’s also great value, as you’d expect from Canyon and is well specced, though I’d prefer to see a sub-compact chainset for tackling steep off-road climbs or laden with bikepacking equipment. 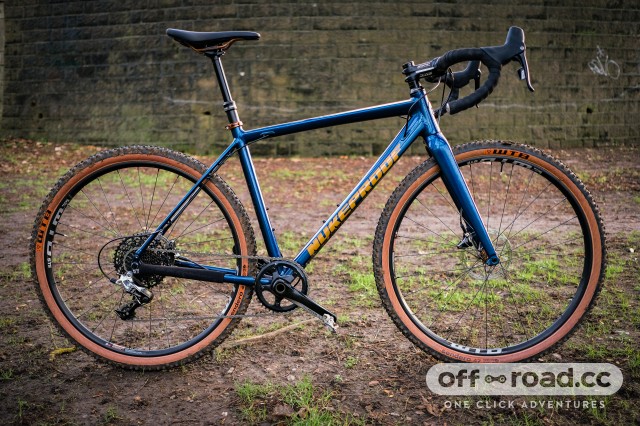 If you’re a mountain biker looking for your first drop bar bike for some sneaky training on a variety of surfaces, the Nukeproof Digger Pro could be for you. The chunky WTB Sendero tyres, dropper post, wide handlebar and short stem ensure it really shines on the dirt with great handling poise that’ll have you ripping, popping and sending in no time. 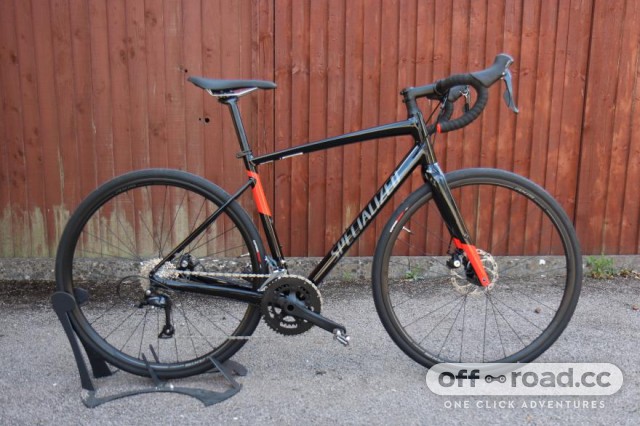 The £1,000 Specialized Diverge E5 Sport brings the US company’s latest adventure and gravel bike design down to an attractive price point and produces a package that works well in a multitude of uses. With the stock tyres it’s a solid and dependable road bike for road riding and commuting, but needs a tyre swap to open it up to more varied terrain, whereupon it’s decently capable for rough stuffing.

Based on riding our local roads and trails, we’ve been really impressed with the Diverge E5 Sport. It’s a competent bike for daily commuting and road rides that take in lots of rough surfaces, and with a change of tyres, it can contend with much more varied terrain. The equipment is thoughtful but where it does fall down, and it’s the usual problem for Specialized, is that it’s not the best equipped for the money. 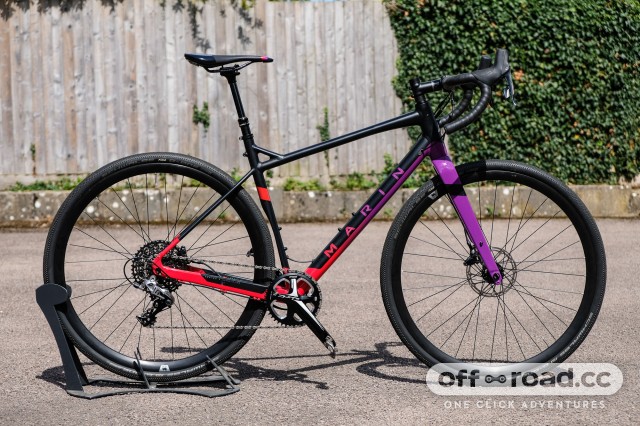 If you want a gravel bike that doesn’t shy away from challenging and technical terrain but is right at home on the daily commute and long adventure ride, the new Gestalt X11 is a really solid choice. A gravel bike for mountain bikers, the handling and stability is a highlight and the dropper post, activated by the redundant SRAM left-hand shifter, is a bonus on steep terrain.

The Gestalt X11 blurs the line between road and mountain bikes more than most (short of the new Bombtrack Hook ADV anyway or fitting drop bars to a mountain bike) and in doing so creates a bike that is highly capable on and off-road, super fun and backed up with plenty of versatility to cover all sorts of riding requirements. 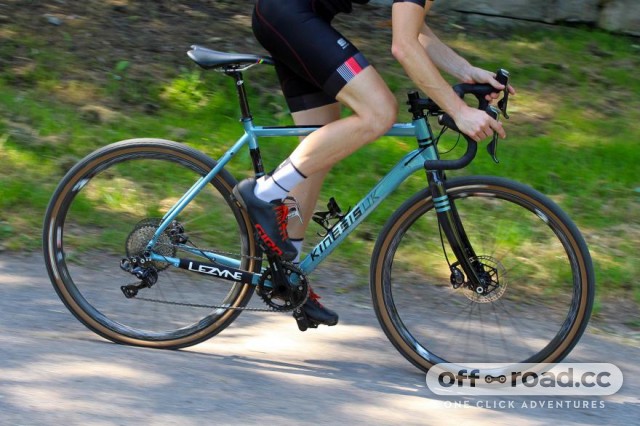 Kinesis has designed a really nice bike in the Tripster AT. It's taken the best bits from the more expensive Tripster ATR and reimagined it in aluminium, and added some useful features along the way. It's a frameset that offers a multitude of build options from a fast road commuter to a large-tyred bikepacking setup for bigger adventures.

While there are a few foibles, we're really impressed with the Tripster AT and at this price there are few rivals that offer this level of pedigree, finish, versatility and capability. If you truly want one bike to do a bit of everything on, the Tripster AT is the bike for you. 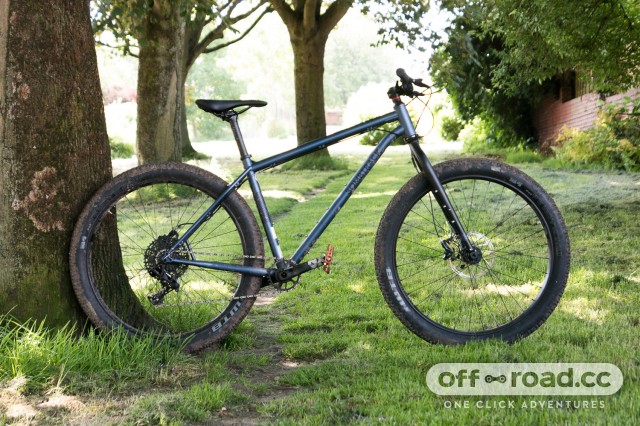 Bombtrack's Beyond+ is a machine made for fully laden exploring, with a steel frame and fork that are covered in mounts and fat 2.8" tyres that take the sting out of the trail. It's certainly competent at that but it's also good fun when you leave the bags at home and just go ride. All in all, the Beyond+ 1 excels at its main task of being a competent and comfortable adventuring machine when fully laden, but also manages to provide old-school fun when it isn't.

If you're looking for a flat out trail slayer, it shouldn't be your first port of call, but if you enjoy finessing a machine through techier terrain then it's still entertaining and it's really good fun on flatter, flowing terrain. 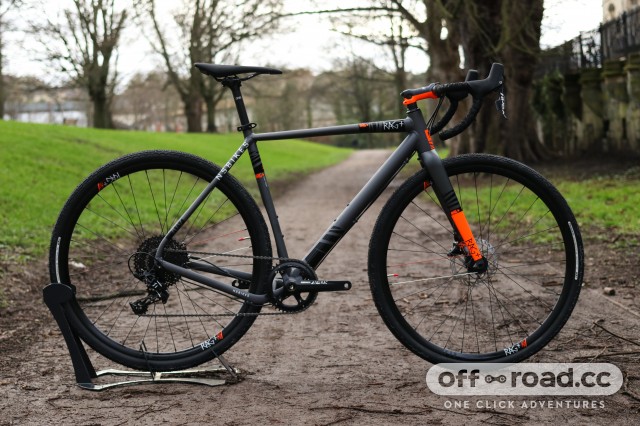 With a background in dirt jump and mountain bikes, the RAG+ is NS Bikes' foray into the drop-bar bike world. The updated version has a few notable changes over the last model with improved tyre clearances, added mudguard mounts on the full carbon fork and flat mount brakes.

That RAG+ feels comfortable wherever you take it without taking itself too seriously. Whether you’re railing it around corners on tarmac, drifting on gravel or sliding on mud the RAG+ doesn’t surprise you with unpredictable handling or bad manners. As a package, the RAG+ is a great proposition with solid components and spec, but we can’t help but feel a bit reserved about the wheelset, especially given the £1600 price tag of the bike.​ 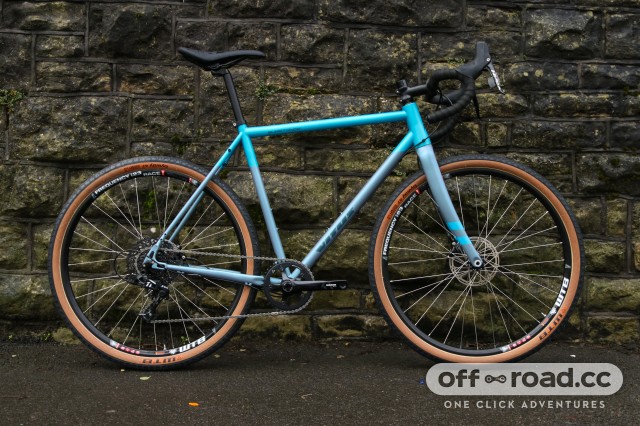 Steel has long been the preserve of the adventure/touring rider so it's no surprise to see Vitus embrace the material for its Substance bikes, the latest addition to the range. Don't go thinking it's an exercise in nostalgia though: with hydraulic disc brakes, 1x groupset and full-carbon fork, this Substance V2 Apex holds plenty of appeal for the modern day on/off-roader.

There are lighter and quicker bikes out there to take on the gravel, but if comfort and stability are what you're after then the Substance will make a loyal companion. It's not just off the beaten track that the Vitus works, either. These mild manners make for a great commuter, especially if you hop between canal paths and the roads, for instance. I could also imagine it coming into its own on a long trek across a county, country or continent. If this sounds like the sort of ride you're after, it's well worth considering. 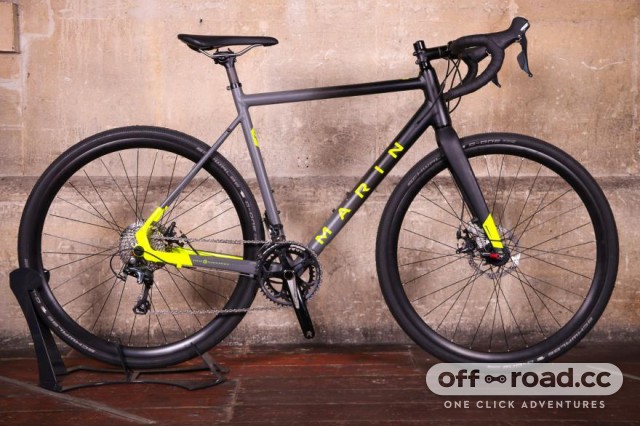 The Marin Cortina AX1 is further proof (if any were needed) that the reasonably priced go-anywhere Useful Bike 'trend' is a trend no more – because these bikes are now mainstream, and single-purpose bikes are the odd ones out. With perfectly adequate roadability and the chops to make you grin and hoot in the mud, yes, sorry, here it comes: This Could Be The Only Bike You'll Ever Need™.

The Cortina AX1 is the lower spec in the two-bike Cortina range, which is aimed squarely at the privateer weekend cyclo-cross racer. Fortunately, what goes into making a decent cyclo-cross bike can – sometimes – make for a decent road and gravel-adventure bike. This is one of those times. 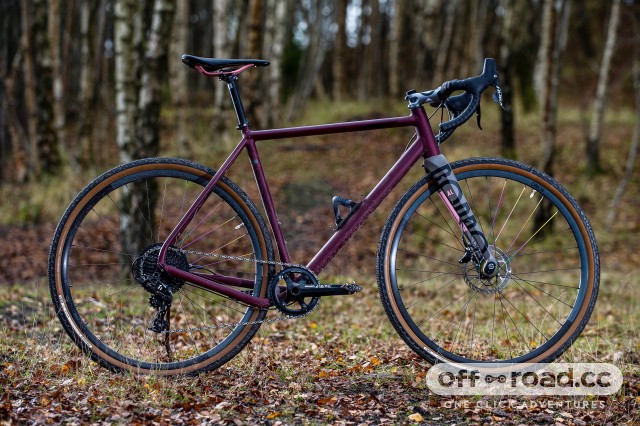 The RUUT AL is the new aluminium adventure gravel bike from Polish brand Rondo. It’s a super comfortable multi-surface machine with agile handling that can be adjusted between fast and racy to more upright and relaxed through its cleverly designed, geometry adjusting Twintip fork. If you are thinking of trimming down the number of bikes you have or if you only have enough room or money for just ‘one’ bike the Rondo RUUT AL should be taken for a test ride.

It’s a really a very good gravel and adventure machine for storming the byways and bridleways and a fabulous commuter to boot. I’m not sure that it makes a lot of sense to flip the Twintip back and forth on a regular basis, you’re bound to have your favourite. But if you are looking for one bike to do most of your riding, having a sneaky second bike available for weekend trips at the flip of that Twintip is a bonus.

Added to that there's the ability to fit 27.5x 2.1" mountain bike wheels and you actually have two more choices to play with, so overall it's a beautiful, geometry morphing, do anything adventure bike and is highly recommended.

We have more similar bikes coming up for review soon, in the meantime though, is there anything in this price bracket you think we have missed or is there a bike you'd like us to review? Comment below and we will do our best to test it!