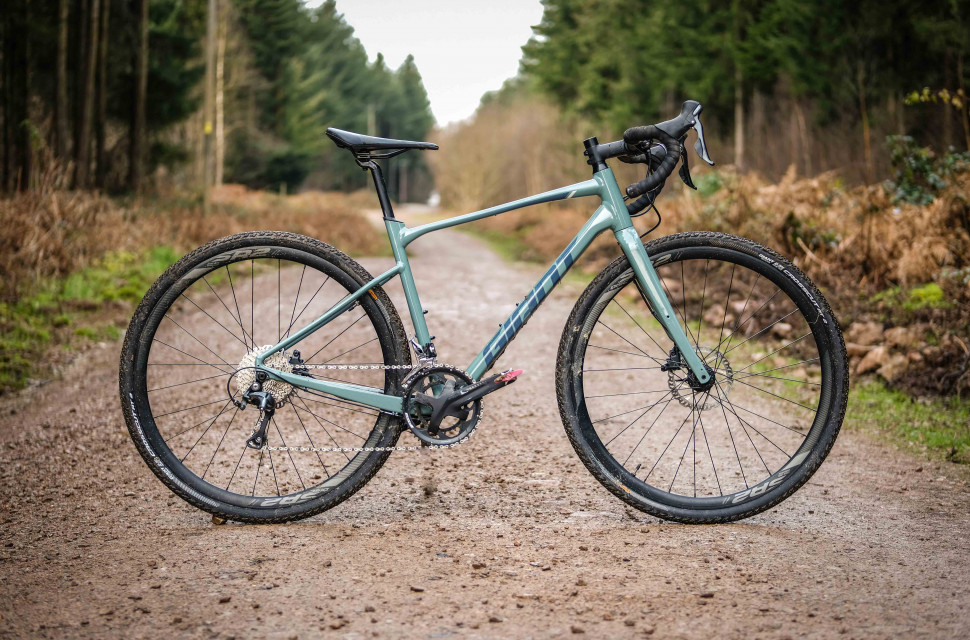 The Giant Revolt 1 is a decent gravel and adventure bike at a respectable price. If you can cope with the odd looks and adequate performance of Giant's unique Conduct braking system, you’re rewarded with a quality alloy frame, a carbon fork, and plenty of scope for adventures.​

The Revolt 1, like its alloy brothers the Revolt 0 and the Revolt 2, is an all-rounder, a versatile design for those who commute, road ride and go on gravel adventures. 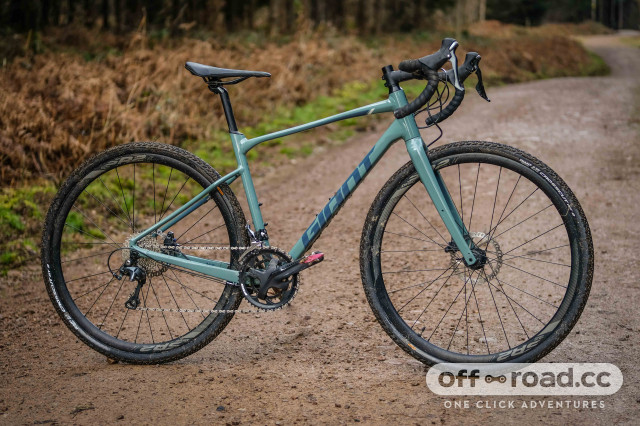 At just £1,149 the Revolt 1 is priced well to accommodate both those new to the sport and seasoned riders looking to dip a toe in the gravel pool (pit?) without having to plan the perfect heist first. 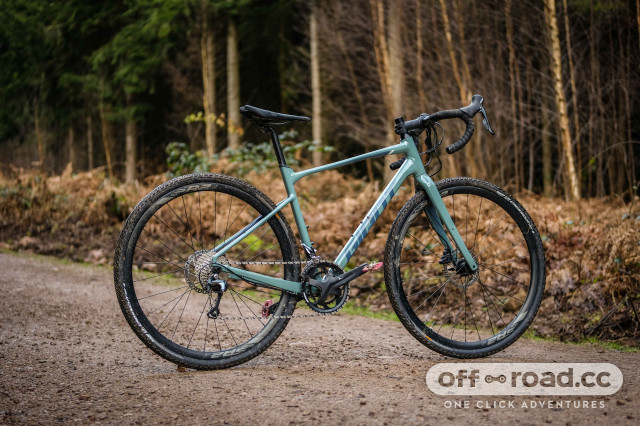 The Revolt 1 has a good, familar spec for the money, and a thoughtful design. The frame is alloy with a full carbon fork, cable routing is internal until it exits by the bottom bracket, and you get thru-axles front and rear. You also have mounts for racks and mudguards on both the frame and fork. 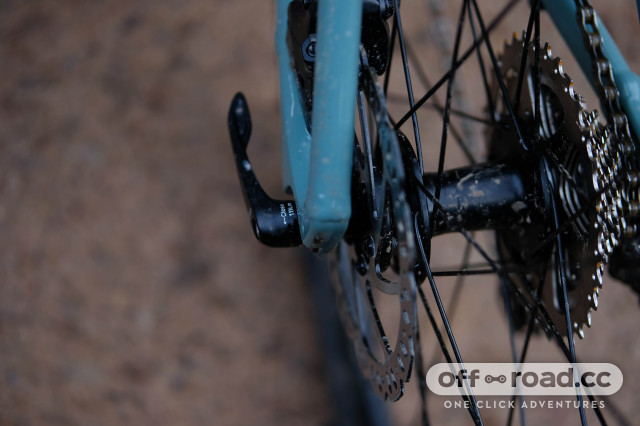 The alloy frame inevitably rides a little harshly compared with carbon, titanium or even steel, but it’s not excessive and certainly not a deal-breaker at this price. The frame offers some easy paths for upgrades to take the edge off, too. 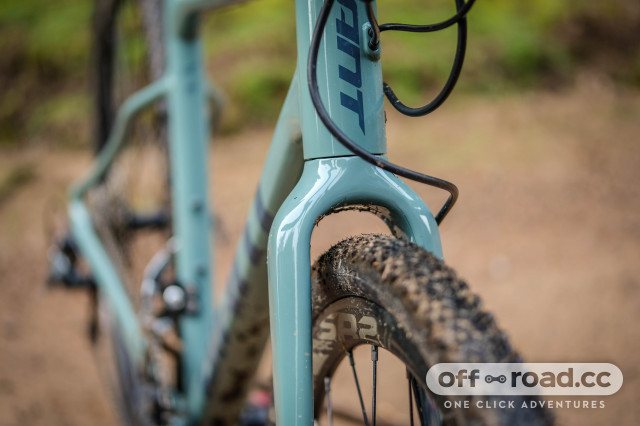 The seatpost is Giant’s D-Fuse design, which takes d-section posts designed to flex and reduce vibrations. Unfortunately, the carbon D-Fuse posts do a fair bit to make the design work, and the Revolt 1 gets a cheaper, less effective alloy post. It's a good spot for an early upgrade, though bear in mind you won't be able to fit a dropper post in there should you fancy going that route. 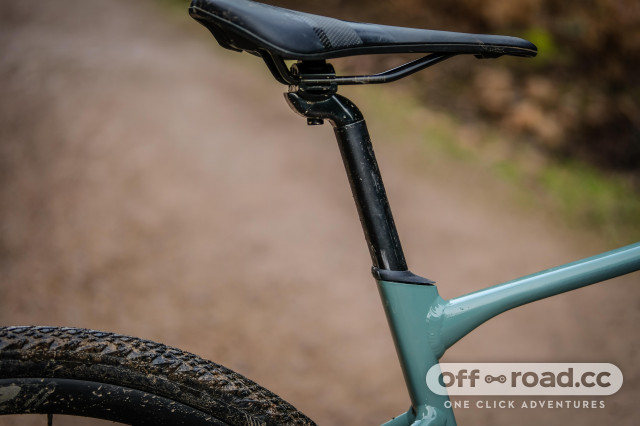 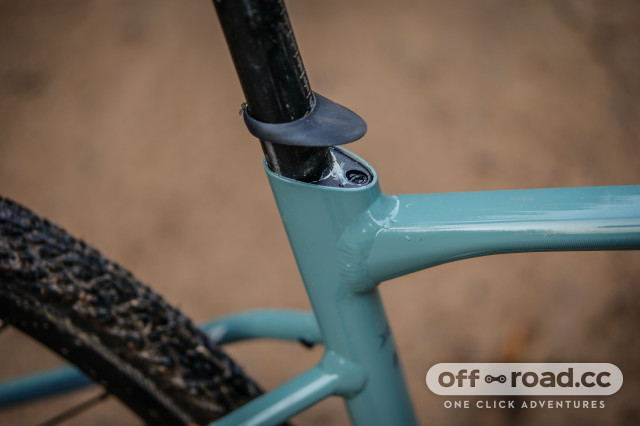 Another trail-smoothing option is to replace the stock 38mm Giant Crosscut ATs with something plumper, and the Revolt has room for up to 45c tyres on its tubeless-ready S-R2 Disc rims – another tick on the score sheet for adventure capabilities. Giant says they'll actually be delivered set up tubeless from the shop, too, which is a major plus, letting you benefit from lower pressures right from the off with no faff. Ours were, but anecdotally it seems not every shop got the message and some bikes wear tubes. Worth checking when buying a Revolt 1! 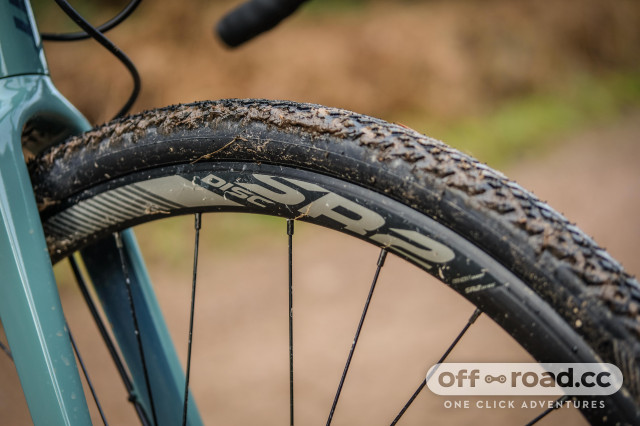 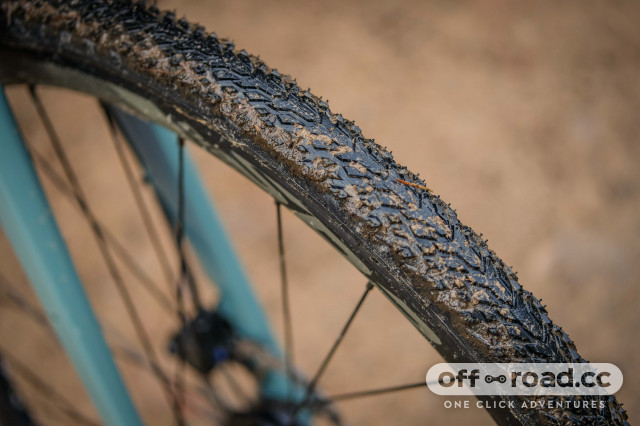 The Crosscuts are well-suited to the bike's all-rounder nature, being pretty fast rolling and  ideal for mile munching on gravel and roads. They're not so great at digging into muddy turns or holding on when climbing technical, slippery trails, so if you plan on hitting more challenging terrain, change them for something knobblier. 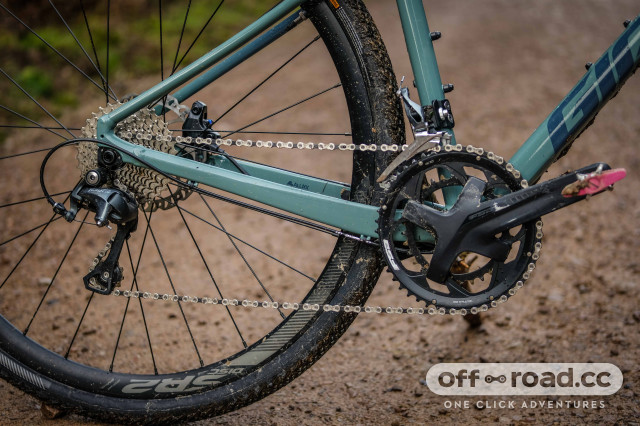 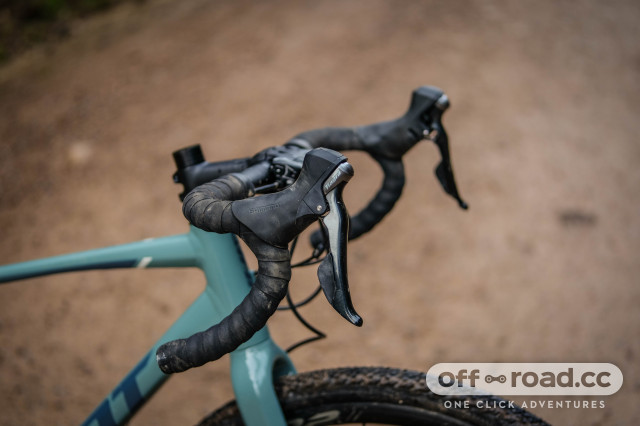 The drivetrain is Shimano Tiagra, with a low 32/48 crankset and an 11-34t cassette. It’s a combination that performs well both in the woods and on the road, although admittedly I do spend a lot of time in the 32T ring when off-road. The shifting suffers then too, as the non clutch-equipped Tiagra rear mech is noisy and a little unrefined in the rough, and the front mech gets unreliable once it chugs down a bit of mud.

It seems it's not yet practicable to fit a 1x drivetrain at this price, so until a cheap SRAM SX Eagle equivalent arrives for gravel bikes, a decent frame at a budget price will stick you with 2x drivetrain. 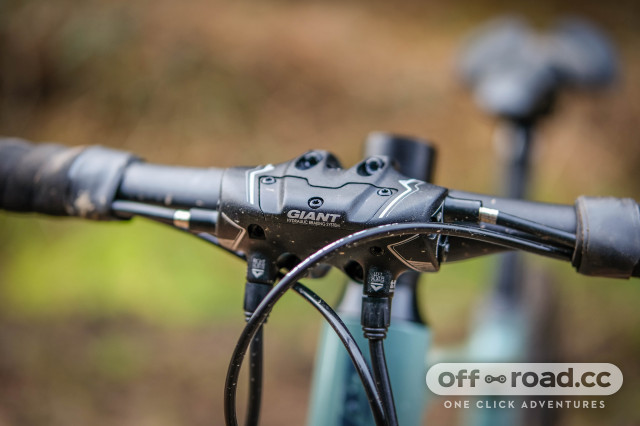 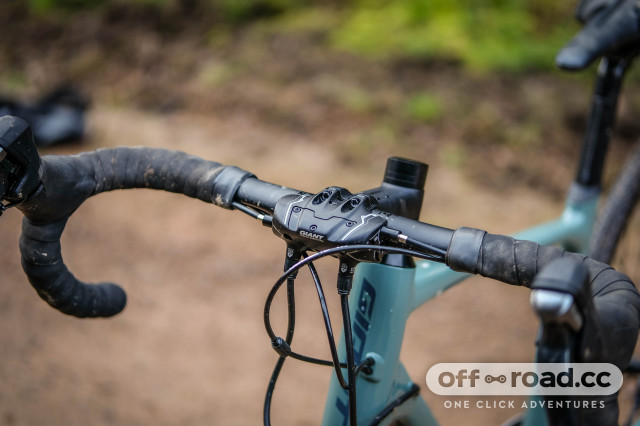 The stoppers are Giant's own Conduct hydraulic disc brakes. These use a mechanical Tiagra lever and cable to actuate a Tektro-made hydraulic system that's integrated with the stem. Awful looks aside, Conduct worked well throughout my test time, with better ‘feel’ and modulation that a full-cable mechanical brake... if not performance to equal full hydraulics. The pads seem particularly prone to squealing, too. 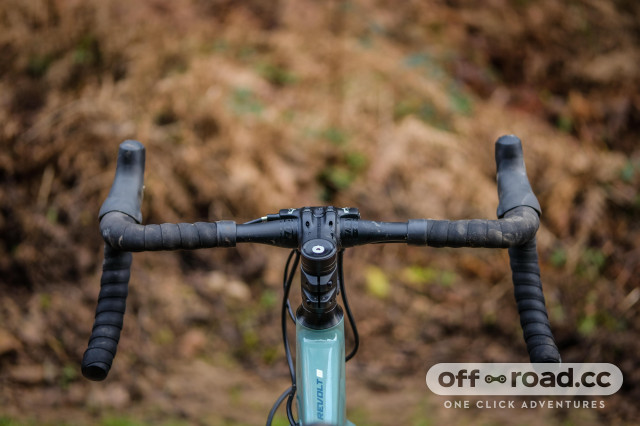 While Conduct may seem unnecessarily complicated, Giant says the system actually allows it to reduce the retail price by £200 over regular hydraulic levers and calipers. That's a meaningful saving, and you're not losing £200 of performance. Yes, it means you're stuck with Giant's own compatible stems should you need to adjust the reach, but at £15 and in a range of sizes (from 60mm to 120mm) it's not a serious issue.

The Revolt 1 is an easy beast to get along with off-road. It's a comfortable place to be on a climb, offering fairly relaxed endurance-style geometry and a workhorse feel on gravel grinds. 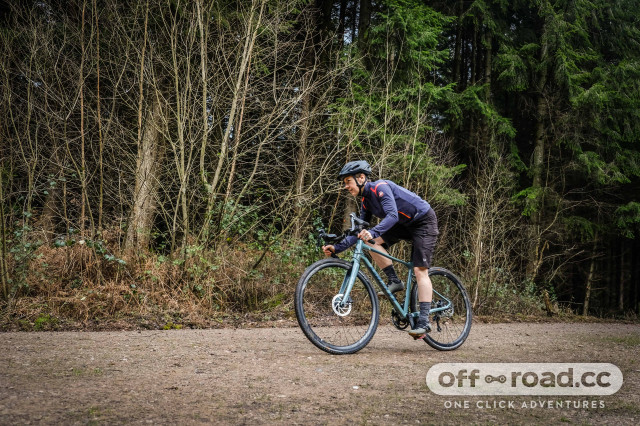 It's also a fun bike to descend on. The combination of a slack head angle and the backswept drops of the D-Fuse handlebar gives you stability in the loose without stretching you out too far forward, but still allows good breathing room when you're spinning along on the bar tops. 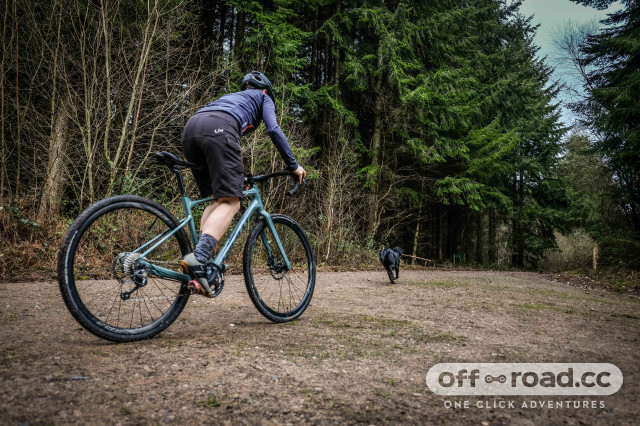 The Revolt is an agile and a capable bike to push hard on the singletrack, especially with low pressures maximising grip. It's capable of a good turn of speed uphill too, despite the 10.6kg weight – it's only 600g heavier than the £1,449 Revolt 0. 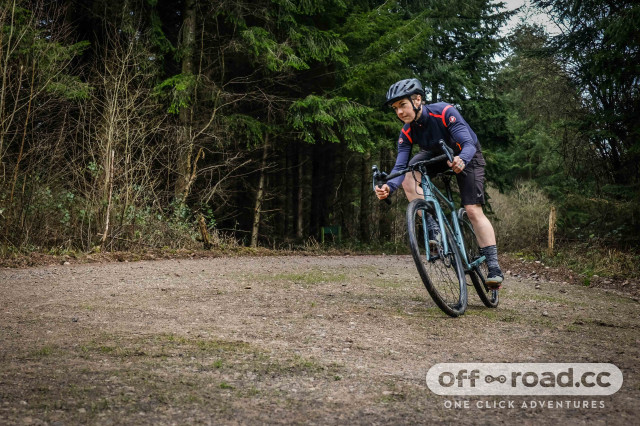 The Revolt 1 nails its brief as a versatile bike: it has the ability to be a speedy commuter, a bag-laden gravel machine or a good time on the singletrack – just take your pick come the weekend. At £300 less than the Revolt 0 and only just over a £1000, it's also a good-value entry point to gravel biking, touring or fast commuting that's easily upgradeable should you really catch the bug.

Ah, I'm really sorry! I see now that quite a few of my photos have gone missing from this review. I will shove them back in now. Sorry about that - damn internet......

I like the revolt range and have had one since 2015. But be warned about the Conduct brakes . They are very unreliable and can stop working properly without warning.i had a set installed on my revolt by a Giant badged shop. I came to realise that they hate them from a setup and maintenance perspective as do others who have had to service them . They will require more trips to the bike shop because they are very difficult to setup and adjust. And you will get a negative vibe when you take them in. I have had to remove them and replaced with manual discs because Said Giant shop effectively refused to sort them out ( and blamed for buying them). They reckon 2 years tops before they go wrong . Shame as the bike is great . But don't buy and bike with these on .

Muc-Off Bottle for Life Bundle £30.00
Pricey but very eco-friendly and just as effective as the pre-mix stuff
Feature