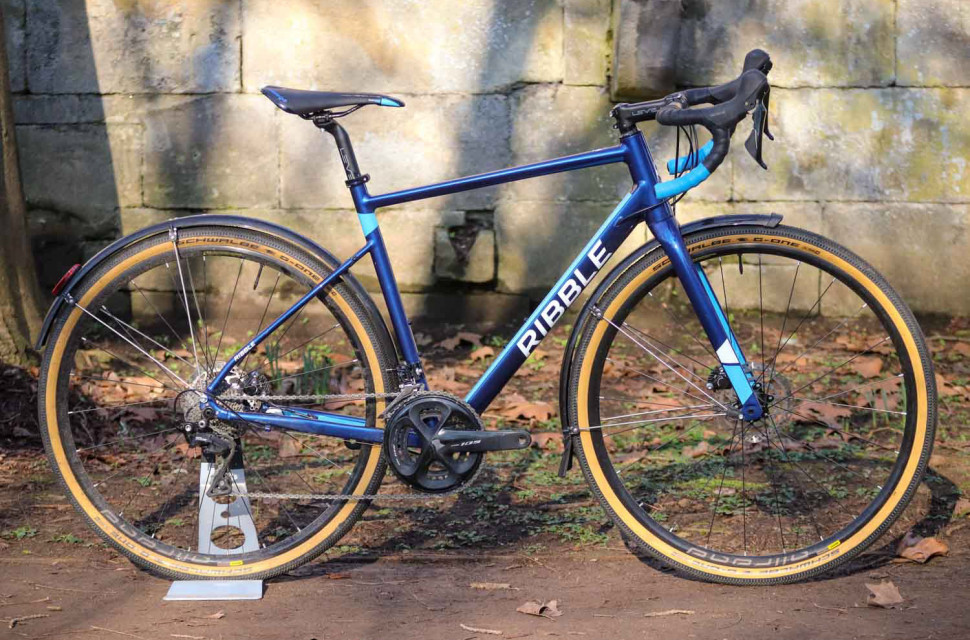 Jon Woodhouse
|
Jun 26 2019
|
Overall
Quality
Performance
Value
What's good?
What's not?
Buy if...
You're after a drop bar bike that can take on pretty much anything you care to throw at it

Ribble's CGR AL Shimano 105 is a hugely versatile and superb value bike for everything from gravel bashing to cyclocross and road commuting. The aluminium frame isn't overly compliant and the kit needs a few tweaks if you intend to mostly stick to dirt, but that's easy enough to custom spec it to your heart's content when you order.

The CGR bit of the name stands for Cyclocross, gravel and road, which tells you pretty much everything you need to know about where this bike is pitched, namely as a do-it-all drop bar bike. The impressive thing is that it actually delivers on this promise, having taken in everything from gravel rides, road Audaxes and tow-path bashing commutes.

The aluminium frame is really nicely made with flattened welds, there are 12mm through axles at either end with flat mount disc brakes, loads of guard, cage and rack mounts and the paint job is smooth and smart - orange is available as well as this blue - and it generally gives off the vibe of being a much more expensive machine than it is. It scores extra points for having a proper, tapered steerer on the carbon forks where many rivals still have a straight item too. 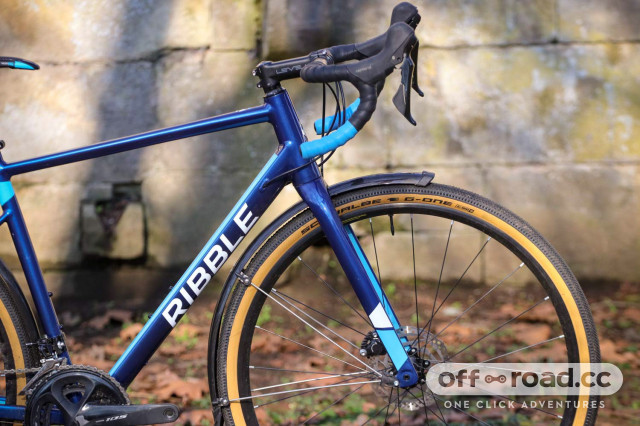 The base kit on the bike speaks that Ribble reckons that it's likely to live on tarmac for most of its life and I don't doubt that's true. While you can stuff up to a 45mm tyre on 700c wheel and up to 47mm on 650b hoops in the frame and carbon fork, it comes with a 40mm Schwalbe G-One AllRound tyre as standard. 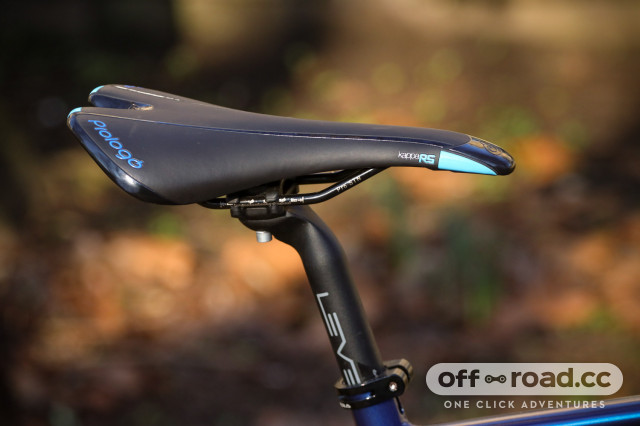 That's a pretty good choice for most road bashing but they lack any serious bite in the dirt unless it's bone dry and the gumwalls might look smart but aren't tubeless ready, though the Mavic Askium wheelset is. Happily - and this is a common theme with the CGR - if you don't want them, you can change them out with Ribble's clever custom bike builder. 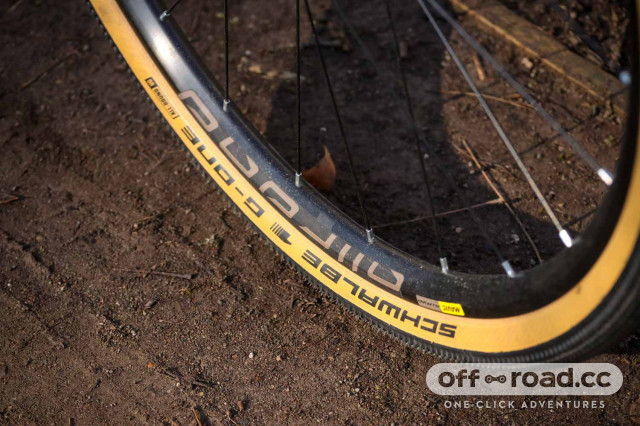 I'd probably opt for some tubeless ready, fatter 45mm WTB Riddlers for an extra £40 and if you really intend to give it the beans off-road, the Mavic Allroad wheelset is a bit burlier and adds £50 to the cost, which looks like pretty good value.

While we're at it, the optional £45 SKS mudguards get a bit rattly if you get on the lumpy stuff and limit tyre clearance but having a dry bum is well worth it the rest of the time, assuming your gravel fashion buddies will let you in the fold.

A solid and smooth drivetrain 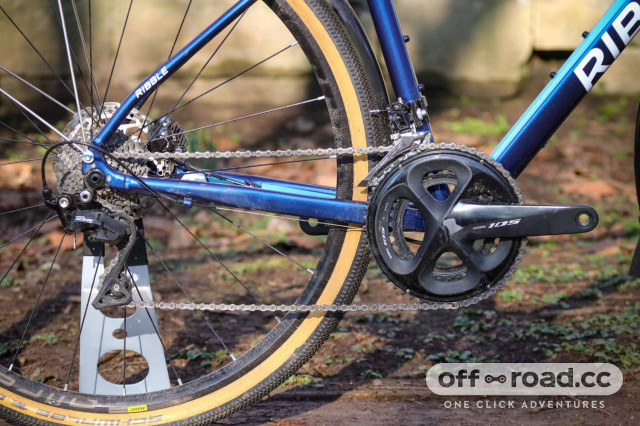 Shimano's 105 hydraulic groupset is a solid choice when it comes to the drivetrain, with 11 evenly spaced ratios over an 11-32T block and smooth, dependable shifting. If you are going to head anywhere in the dirt, switching out the 50/34T crankset for the £50 option of an FSA Gossamer chainset with 46/36T compact will lose a bit of bottom end but there's less of a leap between the rings. I found that resigning myself to mostly living in the small ring when I was offroad wasn't so bad. 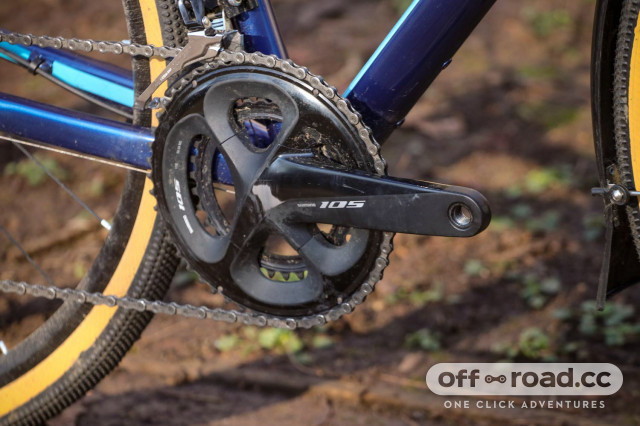 The hydraulic brakes are a good reason to opt for this build rather than the £999 Shimano Tiagra bike, which comes with cable discs. They're powerful, predictable and work in all conditions. I personally don't have issues with the rather bulbous hoods on the brifters, but I know some people that don't get on with them. 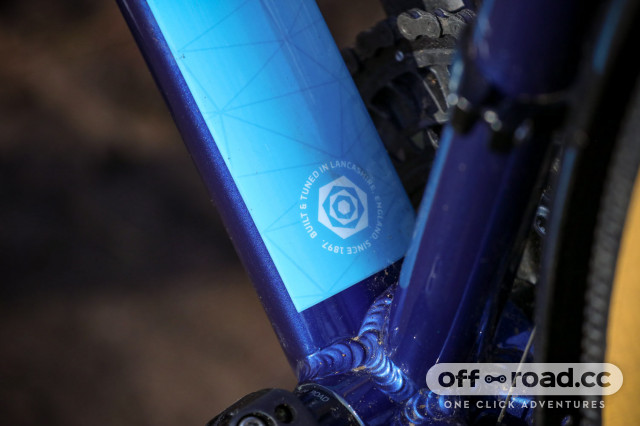 For those that want a more focused gravel-only bike, the SRAM Apex 1x bike comes with - you guessed it - a single ring 11-speed drivetrain and hydraulic discs - but also 650b wheels as standard. I'd probably opt for the 105 bike for the closer ratios and extra versatility unless you're dedicated to dirt-only riding though. 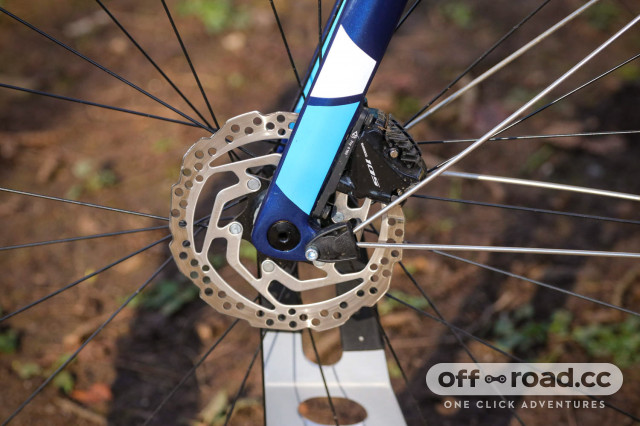 Handling that's got something for everyone 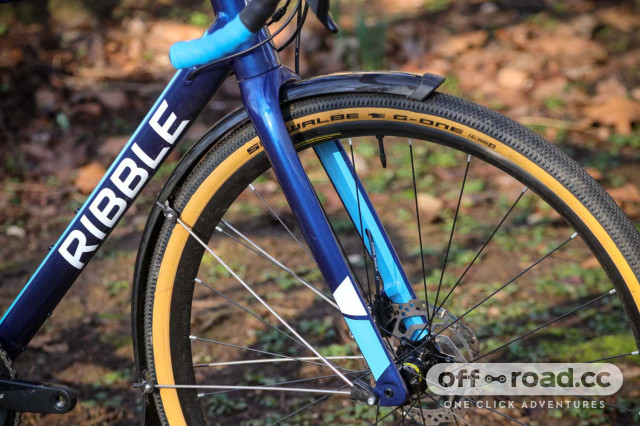 The handling is a mish-mash of geometry from all over the place, with a de-rigeur great big head tube from gravel, a low bottom bracket from 'cross and angles that split the difference with a road bike elsewhere. Unsurprisingly, that's exactly how it rides; a bit of a jack of all trades rather than a master of any single one. 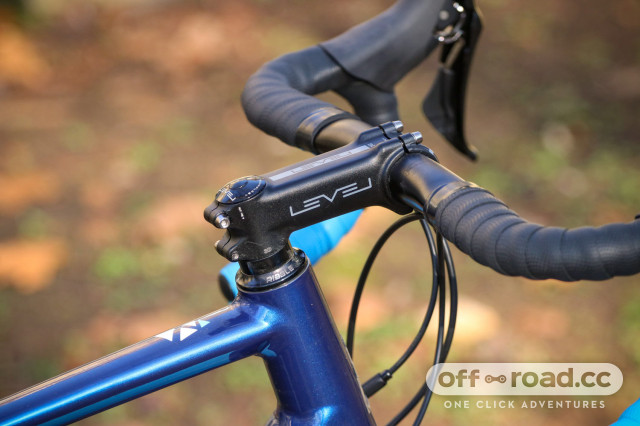 The head angle sits at 71.5° on the medium I rode, but it varies slightly between sizes, getting slacker as you go smaller. At 172cm tall, I could have fitted on the small just as easily but got on just fine with the medium. The ability to buy a different length stem as a no-cost option means you can adjust the fit to suit - assuming you know what you like. 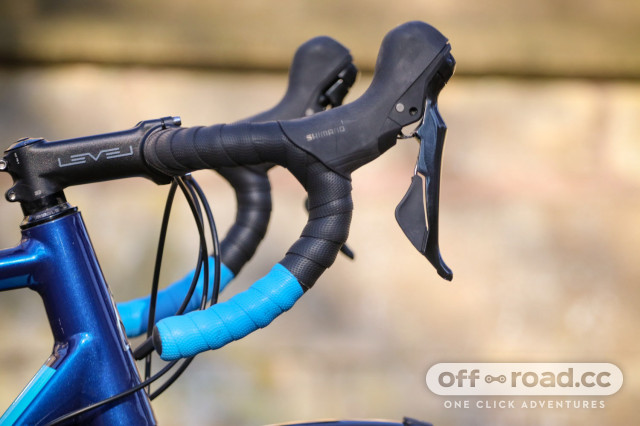 Either way, it's a good compromise that doesn't feel lazy on road and only starts to feel a bit twitchy off it when you get into mountain bike-lite territory rather than gravel paths.

The only thing I can really complain about with the CGR AL is that it's got a pretty stiff rear end. That's not so noticeable on the road unless you hit a pothole or similar, but it gives you a fair spanking off it, though the general ride-buzz nothing worse than you'd expect from most affordable aluminium machines.

Yet again, Ribble has a potential answer in the form of the Reynold 725 steel version of the bike but that'll cost you an extra £200 for a like-for-like Shimano 105 build. Which is best very much depends on what you want from the bike in terms of ride feel and use. You could also stick a carbon post onto the aluminium bike and run the fattest tyres possible to mitigate it, so the options are (almost) endless. 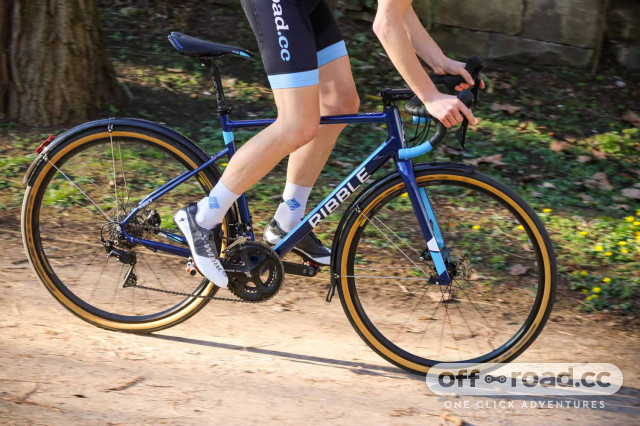 Versatility is the thing I keep coming back to with the CGR and that's really the heart of this machine. If you plan to mix a bit of gravel or a 'cross race in alongside regular commuting, then this build is superb - and if you plan to vary it more towards one aspect than another, then Ribble has you covered with so many custom build options it's quite possible to lose a lot of time speccing up the bike exactly as you want it.

While the handling is a balance between the competing requirements of each of the disciplines, it's a line that Ribble has walked very well, with no major compromises or flaws apparently unless you want to take it to an extreme. Add in the fact that it is stonking value and looks and feels every inch like a quality product and there's very little not to like.

The only real question if I had about £1,400-1,500 to spend on a drop bar bike to do anything and everything on is whether I'd to opt for this aluminium frame with or its steel sister, but I suspect I'd be pretty damn happy with either.