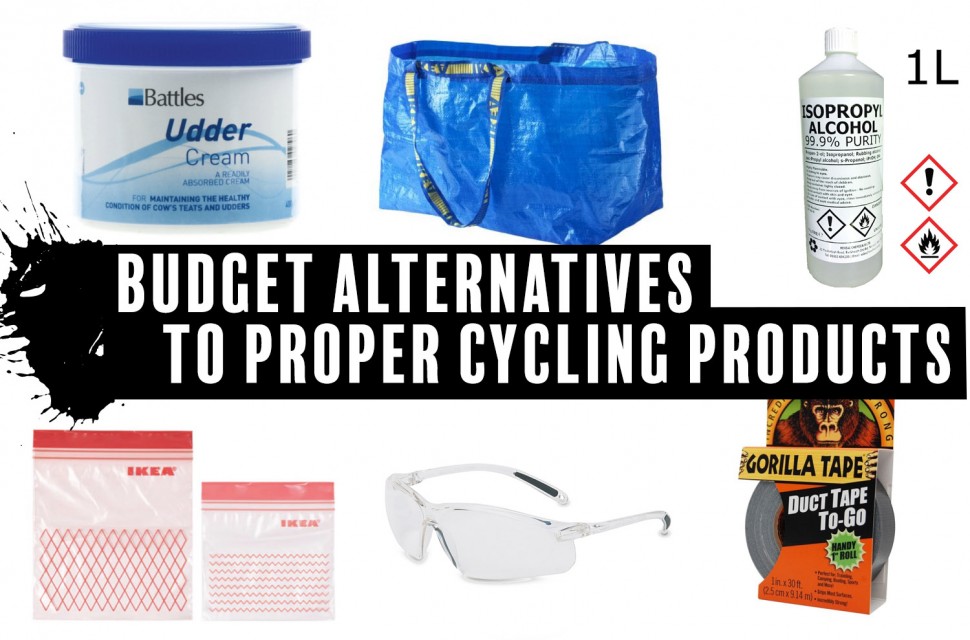 There's no way of getting around it; cycling can be an expensive sport - and that's just for the bike and basic equipment. Once you realise there are many other things that are useful, it can get a bit ridiculous. However, we've come up with some budget alternatives to proper cycling products to try and help out.

Do they work as well? Possibly not! Are they much cheaper? Yes, definitely! Without further ado, here are our cheapskate alternatives to costly cycling products.

If you're not in the know about chammy cream, then it's basically a delightful balm you can apply to your short chamois - or just direct to areas like to get chafed - and it helps to prevent saddle sores and other nether-unpleasantness. The only downside is that it's not cheap. One of our favourites, Charlie the BikeMonger's Bum Butter, costs about £18 for 130g of the stuff.

Know what else has problems with chafed bits? Dairy cows. Yes, the udders of the bovines providing your milk do often get rather sore, what with all the sucking that goes on, which means they need a bit of care in the form of udder cream (thinking about going vegan yet?). It's designed to do pretty much all the things chamois cream does but it's available in literally industrial quantities, making it much, much cheaper than the proper stuff. 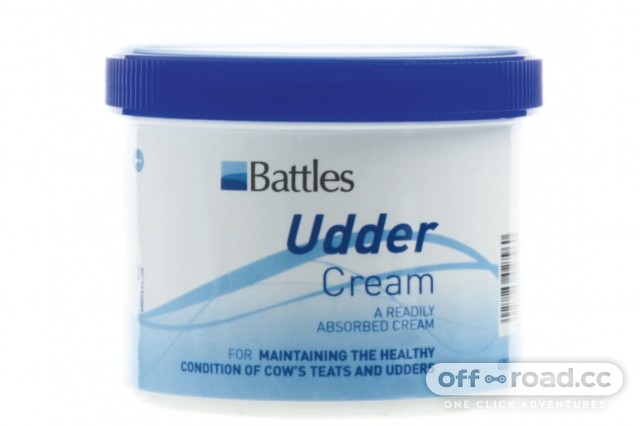 For example, you can get 1.1kg of the  Battle's Udder Cream for £13 from Viovet, which means you can be slathering on the stuff and making udderly brilliant savings (sorry). If it's good enough for the cows...

There's not much worse than tearing a bloody great hole in your new waterproof jacket or trousers - and sewing them back together is out of the question for obvious reasons. A proper repair kit can be quite costly but don't worry, skinflint cyclists, help is at hand.

While duct tape is certainly functional, what you really need is some sail repair tape. As the name suggests, it's made for fixing tears in the spinnakers on yaghts, so it's waterproof, very adhesive and also has a ripstop weave in it to stop holes spreading further. We've used it on everything from insulated jackets to waterproof trousers and it's worked very well indeed. It even comes in loads of colours so you can make a passable go of hiding your fix...

If you want to keep your frame looking it's best for as long as possible - or just don't want your cables sawing through your head tube, then using some frame protection stickers is a fine idea. However, frame patches can be rather costly and the superb, full-coverage option of having your bike Invisiframed is even more.

However, if you're willing to go all arts and crafts, then buy yourself some 3M 8671HS tape and get stuck in - it's used to protect helicopter rotor blades from whirring into insects, birds and other stuff. There are loads of other tapes kicking about, but the 3M stuff is top quality and at £14 or so for a 10x100cm length, it's still pretty damn cheap, though you will need to cut it out yourself.

Basically, if you haven't started running all your bikes as tubeless, what is wrong with you? No more punctures from thorns, no hefty inner tubes and generally all-around less day to day faff. That's apart from setting it all up in the first place, which requires you to convert your rims, assuming they aren't sorted already.

While it's possible to buy proper tubeless conversion tape that can range in cost from £10-£20 for a 10m length, the simple option - and to be honest, the one we usually choose - is to use the magic properties of Gorilla Tape. It's basically extra butch duct tape and it works a treat, with a 25mmx9m roll costing about £3 down your local hardware shop. 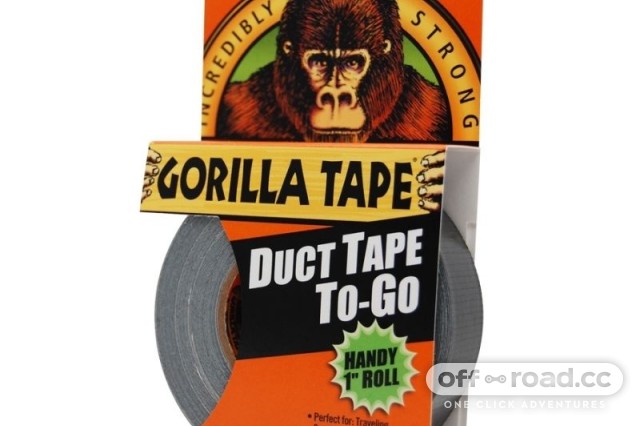 Make sure you make sure your rims are free from dirt, oil and dust before you try (see below) and make sure you run it really nice and tight. As the tape is only 25mm across, you might need to do a couple of goes round to cover a wider rim bed than that for things to seal - but who cares, because it's cheap!

While firing a huge squirt of aerosol disc brake cleaner is satisfying in a mega-cleaning and contact-high sorta way, there are a lot of brands that reckon it's not very healthy for your brakes and it's also rather wasteful. 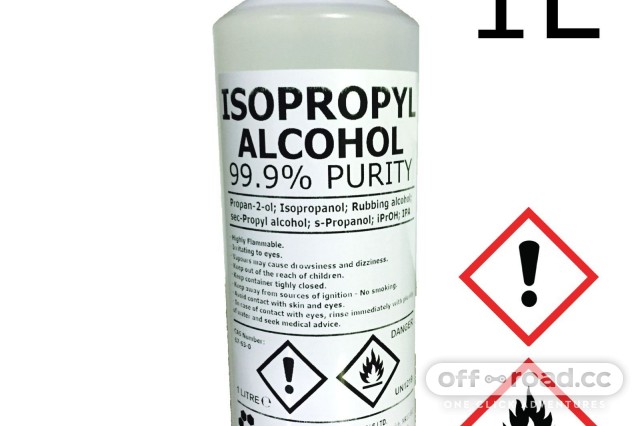 However, you can just go and buy a litre of isopropyl alcohol for £6, which will go really rather far, as long as you don't mind just having to wipe it on things with a cloth. It's also superb for cleaning all manner of other things that you want squeaky clean and free of residue, like suspension components or gadget screens.

Riding glasses don't have a very good life in the UK, especially the clear lens sort that are so useful in winter for keeping filth out of your eyes. Grit, crashes and general carelessness all take their toll on them, so investing a lot of money can often be a false economy when you'll turn those lovely lenses to a matt finishing within a couple of months or accidentally leave them on the roof of your car when you drive home (true story, bro). 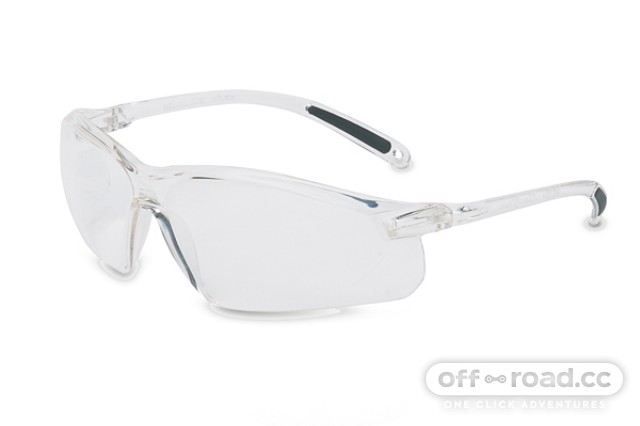 However, many other people have need of not getting blinded when stuff is flying all over the place, such as builders and engineers. Safety specs are clear, provide good coverage and are also pretty damn tough, all while not costing a silly amount of cash.

A set of Honeywell A700 scratch resistant, anti-mist glasses cost a mere £3.49 and come in clear, yellow and blue tints. That's an awful lot of glasses before you've got one pair of big brand glasses eh? You can save the nice shades for summer and just sling these in the recycling at the end of winter...

Once you've finished your ride, getting some carbs and protein into you is a good idea to help fuel your recovery. Proper recovery drinks aren't cheap, but we know of a magical drink that's full of protein, carbs and a bit of salt too - plus you can find it in pretty much every shop in the country and it's delicious too!

Yep, chocolate milk or the many other flavoured variants (there will be no lies here, banana is disgusting) all have decent quantities of protein, fat, and salt that your tired body is crying out for, plus it's available across the land in corner shops, supermarkets and service stations. Okay, there's loads of sugar in it but it's cheap and makes us feel very cheerful post-ride. If you're dairy free (was it the udder cream that did it?) then it's possible to get soy, almond and loads of other variants that do the trick just as well.

Soggy riding conditions aren't the most healthy thing for gadgets such as phones or other sensitive stuff such as wallets, which is why keeping them dry is quite a useful thing to do. While you can buy proper drybags or phone cases and so on, they tend to be quite expensive. 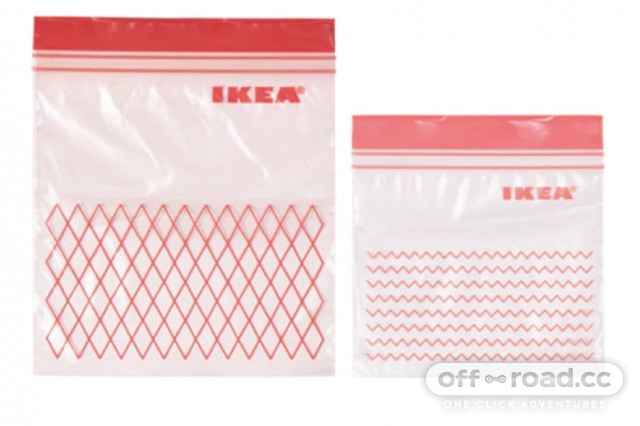 The budget bodger's choice should, therefore, be the ziplock freezer bag. They're cheap, waterproof, reusable (as long as you're reasonably careful with them) and also usually touchscreen compatible. You're always likely to have them kicking about the house too, so even if you do have a posh waterproof case or bag, stuffing a few in your riding pack or the car means you'll never be without.

We like IKEA's Istad plastic bags because they're cheap, have a double ziplock for security and they work with phone screens - though don't blame us if your phone gets knackered because you went diving in a river with a 1p bag for protection. That'd be silly, wouldn't it?

Having all your riding equipment organised in one place before you go on a riding trip is highly useful, but once again, the cost of a proper, organised kit bag might put skinflints off - especially as you'll have to stuff all your stinking/wet/dirty/all three stuff back in there afterwards and make it smell like a damp shoe for weeks afterwards. 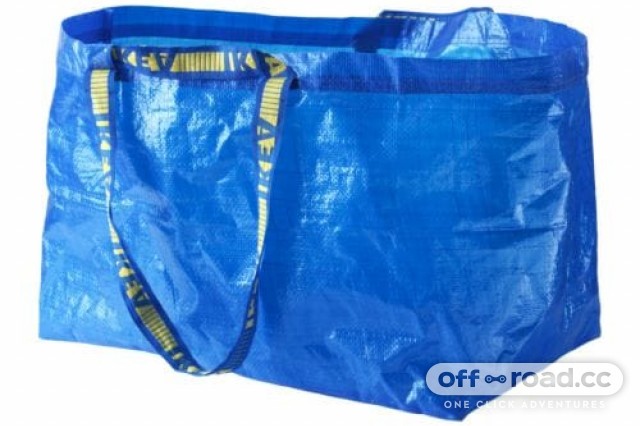 Once again, the cut price saviour of your storage needs hails from Sweden, as the mighty IKEA Frakta is here to help - yep, it's the big blue bag with massive handles that is more commonly seen stuffed full of scented candles and surprisingly expensive yet flimsy shelving units.

At a cost of just 50p, the big blue IKEA bag is voluminous enough to swallow a couple of day's worth of riding gear, plus they're so cheap you can buy another couple for putting all the soggy stuff in once you're done. Legend has it that in Europe, it's possible to buy a big blue bag with an actual zip too - that's got to be worth a pit stop next time you're on the continent.

We hope you've found this little lot useful. If you've any suggestions to add, feel free to share them with us and if you'd like to complain bitterly that these products aren't as good, then that's fine too - we did warn you. Don't forget to reinvest any money saved in shiny new bikes, kit and other fun cycling related stuff, or it'll all be for nothing...

Those glasses are even cheaper than the DeWalt safety glasses I use.  But the Dewalt ones come in clear, yellow, smoke and Irridescent  Last time I purchased the Irridescent was the most expensive at around £12.00.

Currently using these for my Cyclocross wheels.