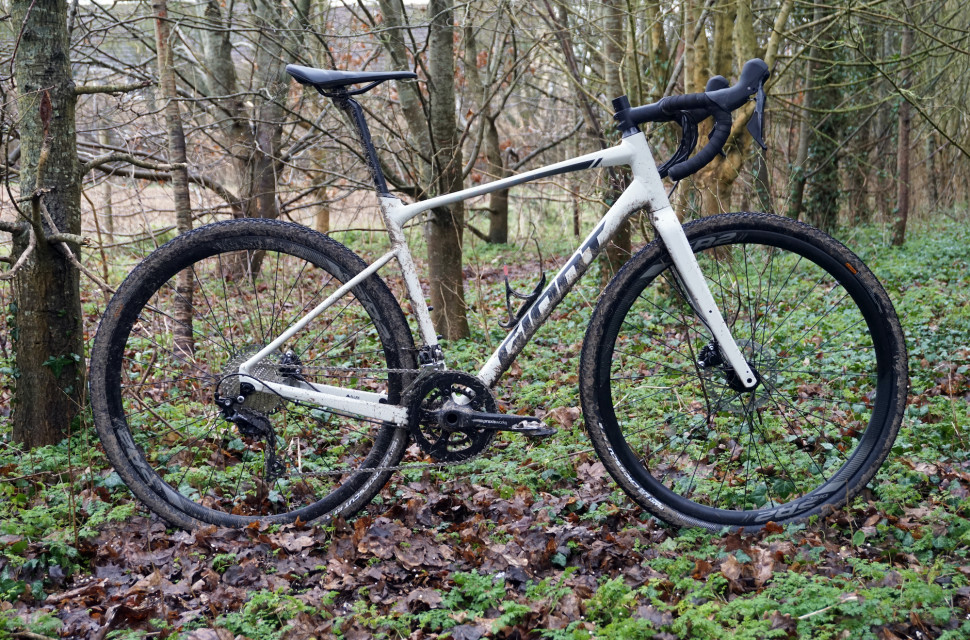 For £1,499 the Giant Revolt 0 gravel bike offers very impressive performance on the road and in the woods, with an easy agility that makes it fun to carve through the corners. The fast-rolling tyres aren't for the committed off-roader, and the alloy frame can be a little harsh despite its carbon fork, but the Revolt 0 is a fine all-rounder – and there's nothing to hold you back on your commute or weekend road ride either.

Giant has done an excellent job with the Giant Revolt 0. It might not have the cachet of posher brands, but it gets on with the business of transcending road and off-road paths jolly well.

The tyres lean towards making good progress on the road. Stick 40psi in them and there’s minimum rolling resistance, and you can bash along at a brisk speed. Ideal for the daily commute or weekend rides, then. 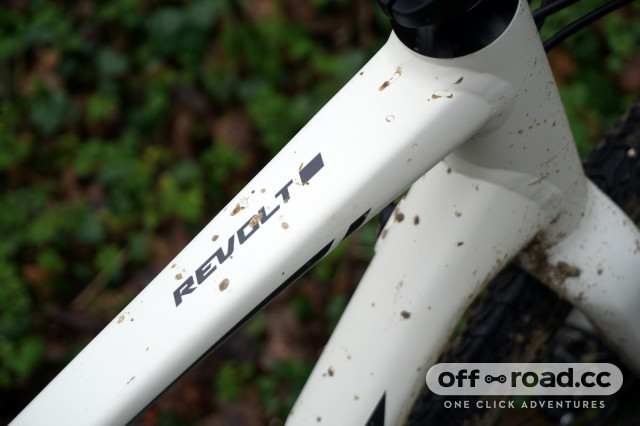 The short stem and swept-back handlebar keep the reach short. This means the bars sit easily beneath hands and arms you won't find overly stretched, yet doesn’t lead to a cramped fit. Good for comfort then, but even better for handling; it nips and carves through corners with an immediacy that many gravel and adventure bikes lack. 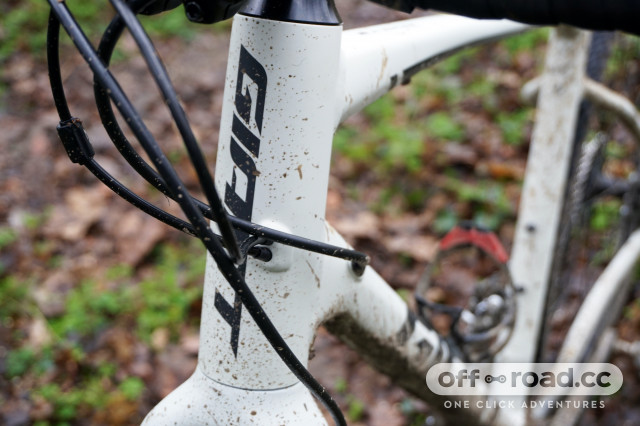 And it’s a hoot on the trail. While the tyres lack the necessary bite when faced with mud-slathered paths (nothing a change to something chunkier wouldn’t sort) it’s a grin-inducing blast when blatting down singletrack, minding your elbows on the trees and doing your best to maintain momentum through the bends. The compact frame only boosts chuckability, with plenty of standover clearance and the stiffness that comes from small triangles. 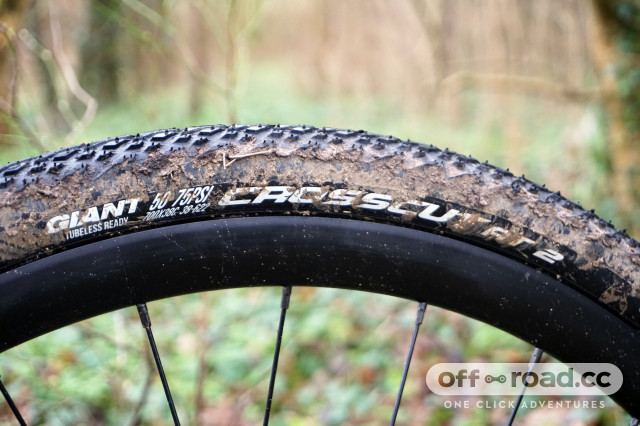 I was surprised both at how fast the bike is and how nicely it climbs, despite the reasonable heft of 10kg. It does not feel sluggish at all. I’ve been fortunate to test some very expensive gravel bikes over the years, but I'm still impressed with how well the Revolt 0 conducts itself. Geometry is loosely based on endurance road bikes, but with slacker angles and a longer wheelbase for extra stability, and for pure enjoyment and grin factor off-road, the Giant does not come up short at all.

Where you can detect the difference between this and more expensive stuff is in the lack of suppleness on the road. There’s a fair amount of feedback through the contact points on hard surfaces, even with the tyres at low pressures. I never found it overly intrusive, but the Revolt 0 certainly can’t match the silky smoothness of a carbon or titanium gravel bike – OK, the comparison is maybe unfair, but it’s worth bearing in mind. 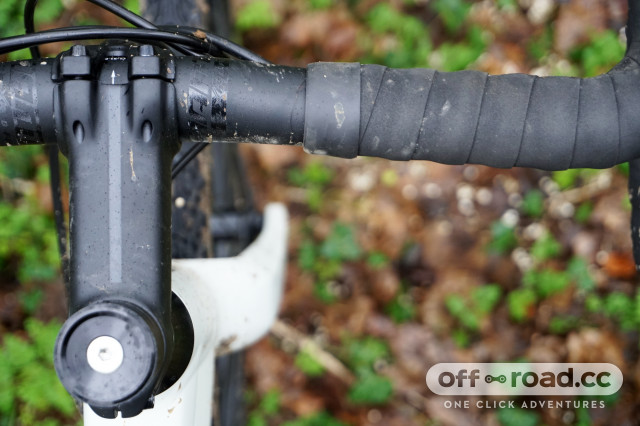 An upgrade to a carbon seat post and bar, and perhaps more supple tyres, should go some way to alleviating the coarseness.

For commuting, the stock bike is ideal with fast-rolling tyres, that tough aluminium frame (complete with eyelets for mudguards) and a good range of gears. The ratios might lack a bit of top end for the faster riders, but for most people they're perfect.

The frame is Giant’s own Aluxx 6061 aluminium, and offers three bottle cage mounts, mudguard eyelets and clearance for up to 45mm tyres. An Advanced Composite fork with a tapered steerer tube slots into Giant’s large OverDrive head tube. 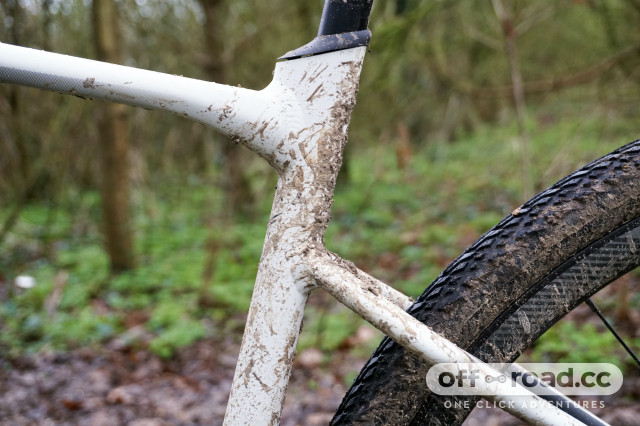 One sensible detail you’ll all love: it's got an externally threaded bottom bracket (BB), for easy service and replacement. Top job Giant. All cables are internally routed in the front half of the frame, but exit via the BB at what looks perilously like a mud trap... so far, testing hasn’t revealed it to be an issue, but long-term might be another matter. 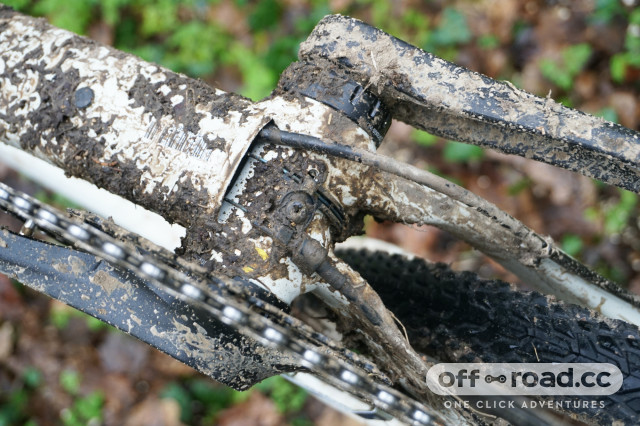 A clear trickledown from more expensive models in the Revolt range is the D-Fuse seat post. It’s a D-shaped seat post that's designed flex to deal under big impacts, and it's good on high-end models where the post is carbon. It's less successful with an aluminium post, as it gets here. 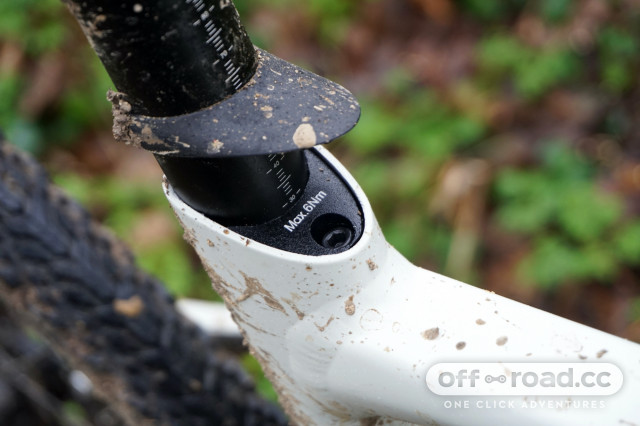 The seat clamp is hidden under the rubber flap. It’s a little fiddly to use as the 4mm bolt is so close to the seatpost – multitools struggle for space – but thankfully, once the post is set (quite easy with its with handy markings on the front) it's secure. It never slipped or needed adjustment during our test. 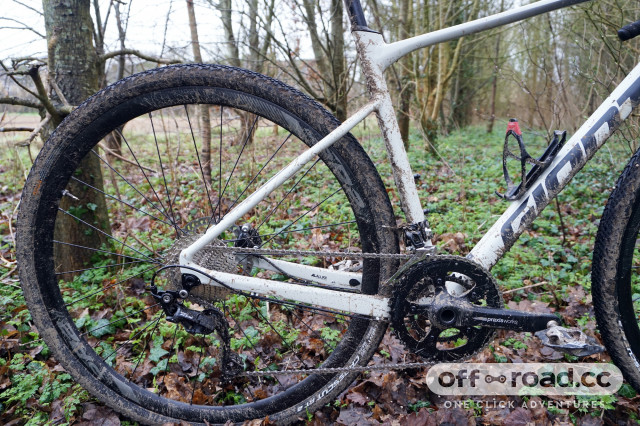 For your £1,499 you get a Shimano 105 mechanical groupset with an 11-34t cassette, paired to a Praxis Alba 2D 32/48t chainset. It's a combination that proves good on the road and in the woods. It would be nice to see Shimano’s new GRX appearing on bikes in this price sector, though – surely it’s only a matter of time – as the GRX mech's clutch mechanism is good for noise reduction and chain retention. 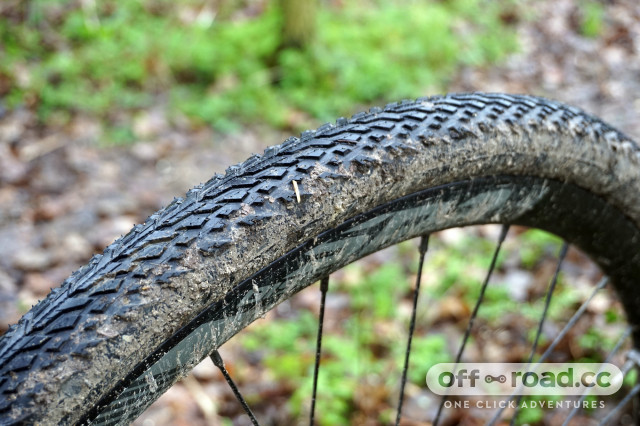 Giant is a huge company and makes all the rest of the components that adorn the frame. So you’re looking at S-R2 Disc wheels with tubeless-ready, shallow section aluminium rims, covered with Crosscut AT 1 38mm wide tyres. Our bike came already set up with tubeless sealant and valves, which massively reduces the risk of punctures and really lets you embrace the benefits of low tyre pressures. Dave Ward, the UK Product Manager at Giant says that this bike is tubeless as standard from the factory, your dealer or shop just needs to put the sealant in and pump the tyres up when they set the bike up for you. 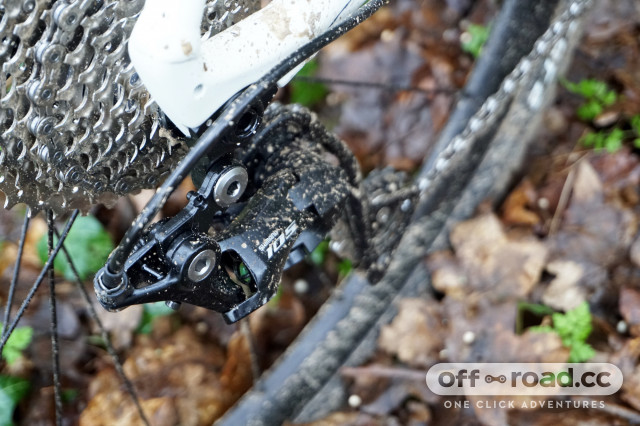 I like the combination of the short stem and swept-back Contact XF D-Fuse handlebar. For riding off-road, having the handlebar close makes cornering and generally controlling the bike much easier than if it's stretched out ahead. And while the ovalised top section still provides good comfort for cruising along, the short reach to the hoods and drops gives you total control. 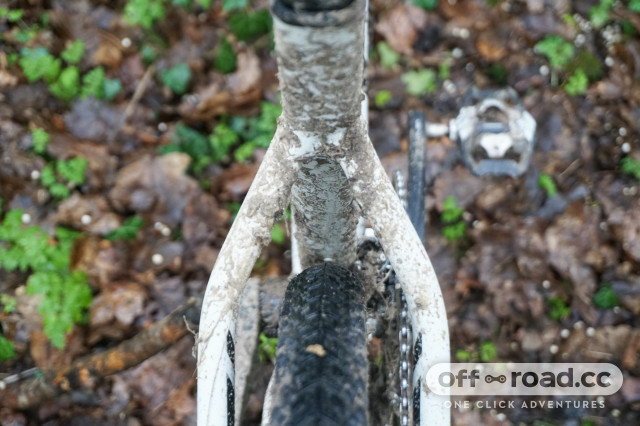 There are two cheaper Revolts based on the same frame and fork: the Revolt 1 at £1,149 and the Revolt 2 at £1,049. So there are options if you can’t stretch to this one. Going the other way, the recently-reviewed Revolt Advanced 2 gets a carbon frame for a small weight saving and comfort improvements and costs £2,099. 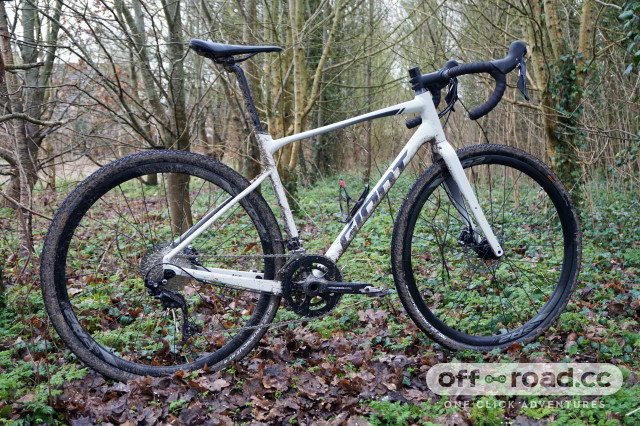 If you’re looking to embark in some of this gravel and adventure fun that's sweeping the land at the moment – but don’t want to spend a massive chunk of cash –the Revolt 0 is seriously worth considering. Especially as it’s also so versatile, and ideal for daily commuters looking to enjoy the benefits of big tyres, disc brakes and relaxed geometry.

Whether you ride dirt roads, trails, gravel, or a mix of everything, the challenges are the same. You want a bike that floats right through it, keeps you in control, and is comfortable for long days in the saddle. The new Revolt delivers on all accounts. It features a lightweight ALUXX aluminium frame and carbon fork, each engineered to balance stiffness (for efficiency) and compliance (for comfort and control). Components including the D-Fuse seatpost and handlebar further absorb road shocks and vibrations. The frame is integrated for disc brakes and it has clearance for larger tyres (up to 45c).

Over half the world’s roads are unpaved, offering ample opportunities for adventure on gravel and dirt. This lightweight aluminium all-rounder is the perfect way to explore roads you’ve always thought about but never ridden.

Gravel-riding geometry features endurance positioning and shorter chainstays. The result is precise handling, agility and control in all situations, from out-of-the-saddle road climbs to fast and rugged dirt road descents.

You get a lot of bike with great road speed and off-road capability, with versatility to battle the daily commute or embark on a bikepacking adventure - it's a great package, with no serious flaws.
Bikes