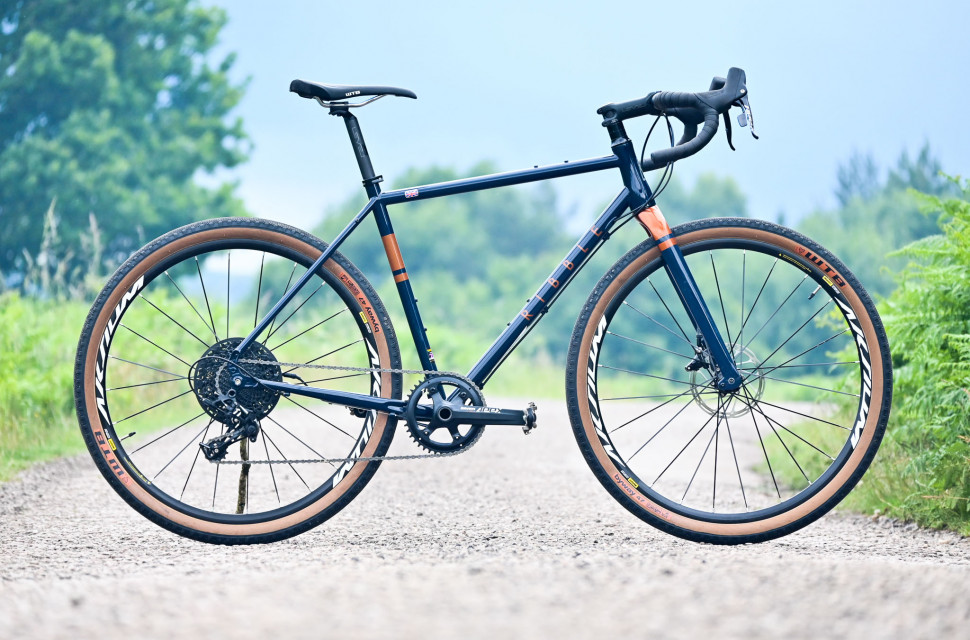 Ribble's CGR 725 SRAM Apex 1x 650b is a hugely versatile bike that offers incredible value to boot. The combination of steel frame and plump but fast-rolling 47mm tyres deliver a comfortable ride on dirt while still being plenty quick on road, with sorted handling that's a happy medium between stability and steering agility; it's quite possibly all the drop bar bike you need for gravel, road or commuting.

The CGR 725 is Ribble's steel-framed option in the versatile CGR lineup, with all bikes getting very similar geometry but offering you a choice as to the low weight of carbon, affordability of aluminium or more premium pleasures of titanium. While the skinny Reynolds 725 tubing means you get some traditional good looks, the downside is a little extra heft in the frame - a claimed 600g or so over the aluminium CGR I've tested previously.

It's nice and modern elsewhere, though, with a full carbon fork, a neat tapered headtube with internal bearings, plus 12mm through axles at either end. There's a full complement of rack, mudguard and bottle mounts, including a bento box mount on the top tube, so you're well catered for. 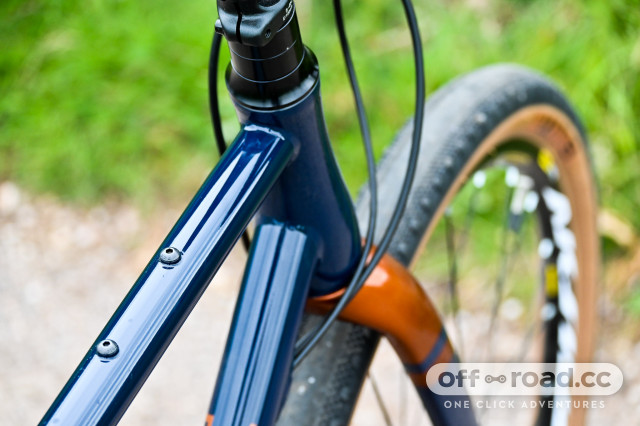 As you can probably guess from the do-it-all 'Cross, Gravel and Road' moniker, geometry is a blend of selected cuts from each discipline, with a fairly tall head tube for good off-road position, low bottom bracket for 'cross stability and figures that split the difference with a road bike elsewhere. 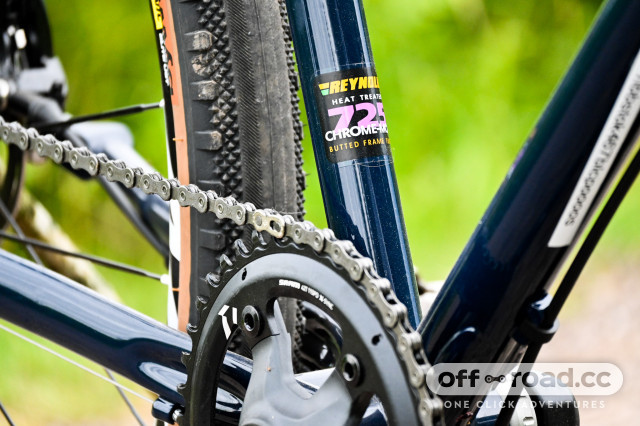 While 'jack of all trades and master of none' is usually levelled as an insult, it's probably the CGRs main strength. Unless you're lucky enough to have a wallet deep enough and garage large enough to house every subset of riding niche from pure road to pure gravel, having one bike that's equally happy taking care of the daily commute plus weekend gravel or road riding adventures is a strong plus. 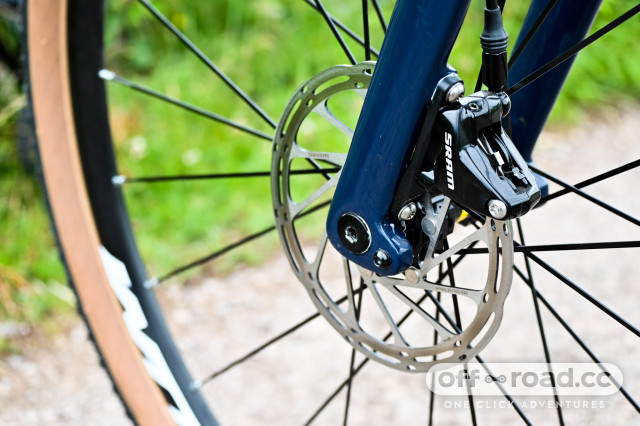 Part of the beauty of this bike is that Ribble allows you to tweak pretty much every element of the build once you've chosen you base groupset, SRAM's Apex 1x 11-speed group in this case. It starts out as a fairly gravel focused build, with 650b Mavic Askium wheels and chunky 47mm tyres as standard, but I made a few alterations to the stock setup for extra travelling ability. 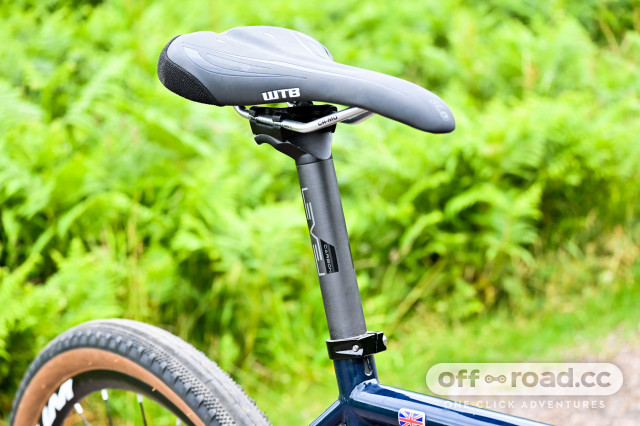 While the fat rubber cuts down on chatter and tiring buzz really impressively I sprung an extra tenner on the semi-slick WTB Byway tyres over the totally slick WTB Horizon rubber.  Having a little bit more tread on the edge is a definite benefit if you intend to get them dirty at any point, but tubeless compatibility in tyre and rims is a big plus as standard. 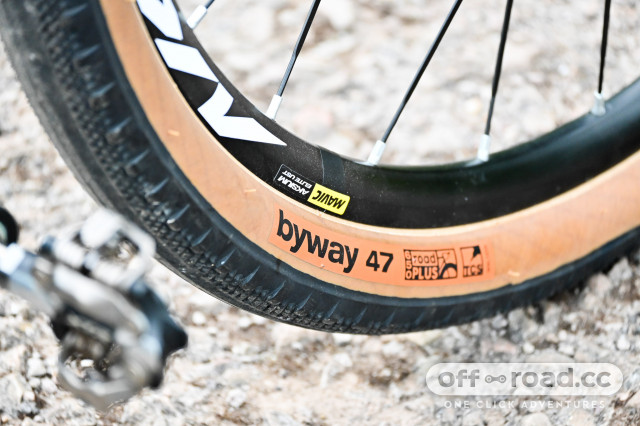 I also opted for a £20 upgrade to a carbon fibre post for a little more cushioning and some flared gravel bars for extra off-road control, but you really can go mad with wheelset upgrades (back to 700c if you so desire) as well as fitted mudguards and the ability to change everything from stem length to stickers. It's a neat, slick online system too - if you change the wheel size, it'll also change the tyres to match and let you know the cost difference. 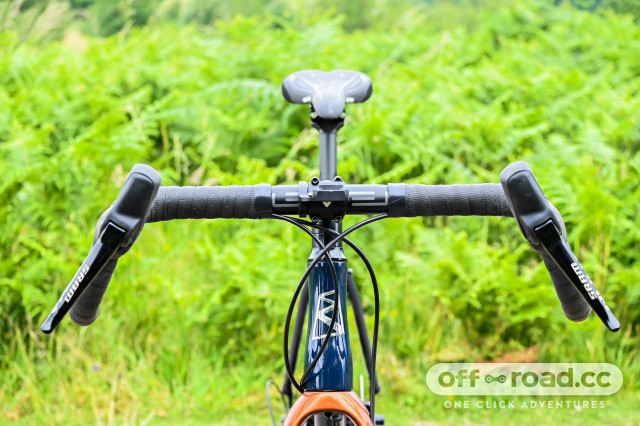 The result is a proper do-anything, go-anywhere drop-bar machine that's as happy racking up some big road miles as it is heading off fully laden for a bikepacking adventure. I found the riding position on the small frame spot on for my 172cm frame, while the 140mm long headtube meant a nice halfway house between fully upright touring feel and bite-the-stem race position. 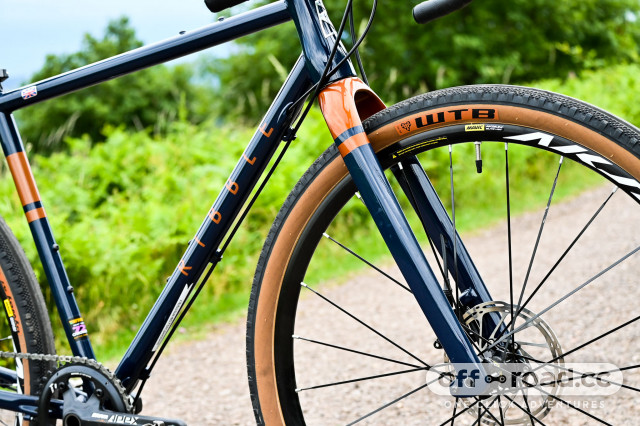 The 72° head angle strikes a decent balance between feeling fast and interactive when you're on the road without feeling like it's actively trying to murder you when you're off it. Like most gravel bikes, the CGR 725 baulks at anything harder than gently rolling and fairly smooth singletrack, but if you keep it to fireroads, the fat rubber is noticeably gripper and less punishing, while the steel frame feels like it transmits less noise back to you than the aluminium bike. I can't say I noticed the extra weight, either. 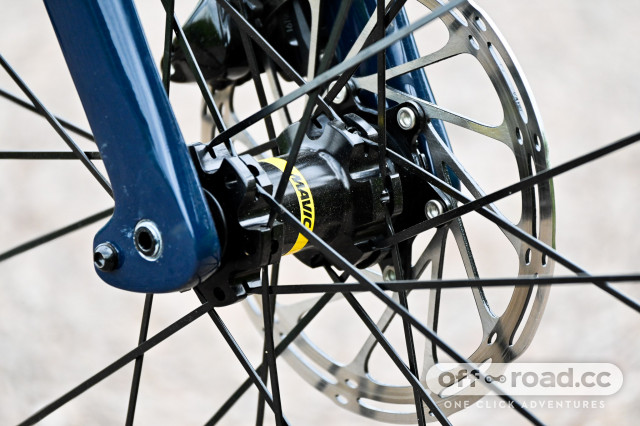 I was damned if I could feel any noticeable difference in drag on the road with the plump tyres either, though if you intend to spend most of your time on tarmac, I'd suggest looking at a drivetrain other than the widely spaced steps of the 11-42T SRAM Apex setup. It's great for use in the dirt, where it allows you to dump gears quickly and react to rapid changes in gradient, but on the road it's easy for your ideal cadence to fall between ratios. 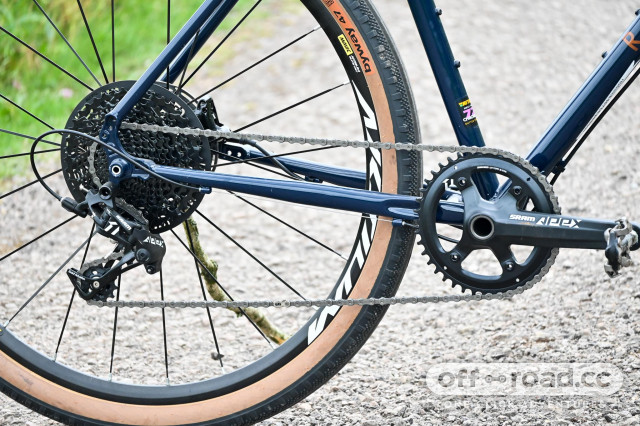 It's worth pointing out that there's are also Shimano Tiagra 105, Ultegra and GRX models that span from £1299 up to £2099 before options, so you're pretty well spoilt for gearing options. 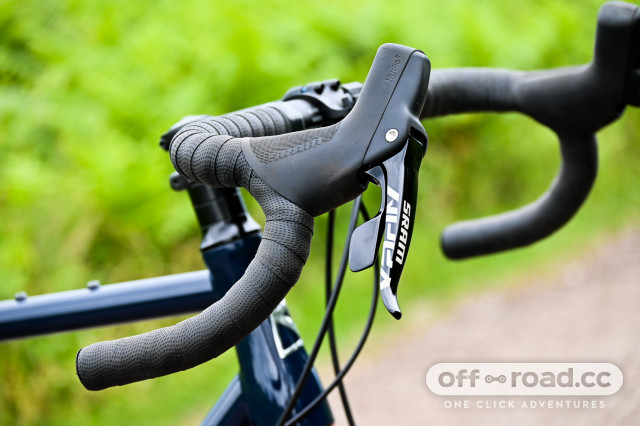 On the plus side, the hydraulic Apex brakes are powerful and reliable and the hoods are much less bulbous than Shimano's offerings. I really liked the own-brand Level flared bars too; while the wide stance on the drops feels much less aero than normal bars, there's a huge amount more comfort and control when descending or riding offroad. 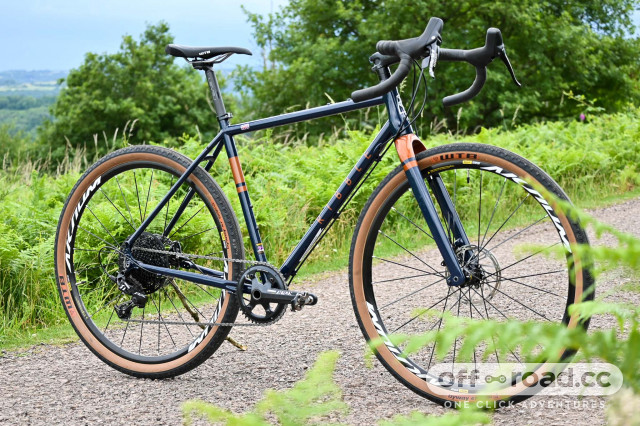 There's little not to like about the CGR 725. It's equally adept on tarmac or fireroad, with the combination of steel frame and fat 650b tyres giving comfortable cruising ability, no matter what surface you're on. It's stable on dirt without feeling lethargic on tarmac, while it feels just as happy weaving in and out of traffic as it does at the end of the long, full laden day of bikepacking.

While the bit of extra weight in the frame might put off those purely driven by speed, the 10.5kg mass of this build (with innertubes) I didn't find it all that noticeable in real-world use - and I have to admit that skinny steel poses a greater aesthetic draw to me on a drop-bar bike than any amount of oversized and manipulated carbon ever could.

The real ace card is that all this is backed up by extremely impressive value. There's a solid kit list for the base build that's only improved further by the ability to fine-tune the spec to make it more suited to you exact needs. If I (god forbid) had to reduce myself down to a couple of bikes, the CGR 725 would be a very strong contender for the one of those that had drop bars.

Or are you just salesmen?

Dont you care about the truth?

Its NOT a lovely frame. Ribble cut corners in the wrong places. I bought a CGR 725 gravel bike in July 2019. I liked it to begin with, but after a few months it fell over when leaning against a wall and unfortunately the derailleur bashed on the pavement. At worst case I would have expected this to damage the deraillerur, or better to break a replaceable hanger. But there is no replaceable or separately-welded hangar. So the frame bent. Local bike shop straightened it for me, but commented that it was "like butter". I have now had it straightened 3 times in a year. I took it to a certified Reynolds frame builder, who said it could not be repaired or strengthened, and that essentially it was a bad design - Ribble cutting corners where corners should not be cut. So I need a new frame. I asked Ribble about warranty, but they pointed out that bike falling over is not normal use. Cheapskates in my opinion, and I will definitely not be buying anything from them again. Suggest you don't either.

It's not a lovely frame. Ribble cut corners in the wrong places. I bought a CGR 725 gravel bike in July 2019. I liked it to begin with, but after a few months it fell over when leaning against a wall and unfortunately the derailleur bashed on the pavement. OK, I my fault, but its something that happens to all bikes from time to time. At worst case I would have expected this to damage the deraillerur, or better to break a replaceable hanger. But there is no replaceable or separately-welded hangar. So the frame bent. Local bike shop straightened it for me, but commented that it bent back "like butter". I have now had it straightened 3 times in a year. I took it to a certified Reynolds frame builder, who said it could not be repaired or strengthened, and that essentially it was a bad design - Ribble cutting corners where corners should not be cut. So I need a new frame. I asked Ribble about warranty, but they pointed out that bike falling over is not normal use. Cheapskates in my opinion, and I will definitely not be buying anything from them again. Suggest you don't either.

mike the bike 1 year 6 months ago

Rob is quite right, this is a lovely frame.  Mine combines the convenience of internal cabling, the quiet comfort of steel and more mounts than you can shake a stick at.

And he's correct about sizing too.  I've been a 'medium' in frames for fifty years but Ribble's guide said 'small'.  And it fits perfectly.

Having said all that, I think £800 + delivery for a simple steel frame is pushing the envelope a bit.  If it was two hundred cheaper they would sell a lot more.

I bought this last year, only differences are standard handlebars (which have a nice flattened top shape) and 700c wheels as it does a bit more on road commuting, although I'm planning on a set of 650b wheels with slightly more off road suitable tyres on to swap out for a bit more off road action. It's a lovely riding frame, comfy but still has a bit of spring in it's step when you want it to have. Just watch the sizing, I got to try one out at bluewater so opted for a large, based on my height etc I'd technically be an XL, but these seem to come up quite big, I'd probably have a good chance of making a medium fit well if I wanted a racier fit.

I still have a dedicated road bike, but for everything else (I haven't gotten into the whole mountain bike side of things) this does the job brilliantly. And the colour is pretty awesome in real life too.