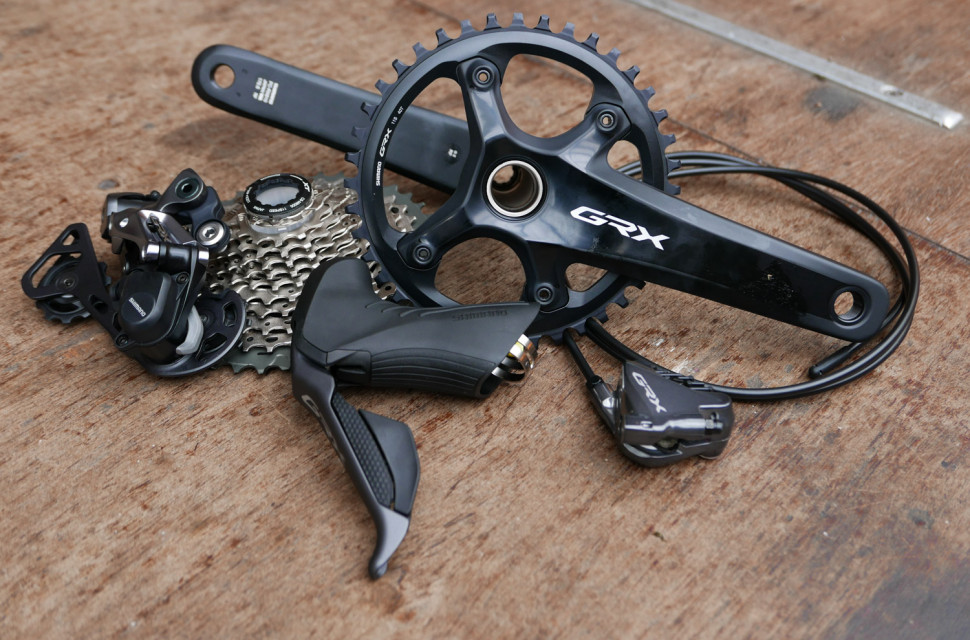 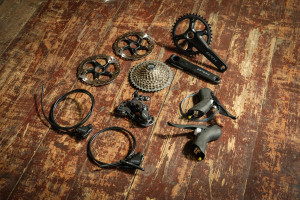 There are a number of components that are shared between the mechanical RX600 GRX and Di2 RX800 groups, with the chainset, chain and hydraulic brake callipers all being the same whether you choose cables or wires.

The GRX lineup doesn't get its own cassette either, with the wide range option coming from Shimano's XT mountain bike group and tighter cassettes from Ultegra. We've included the weights in this roundup for completeness anyway. 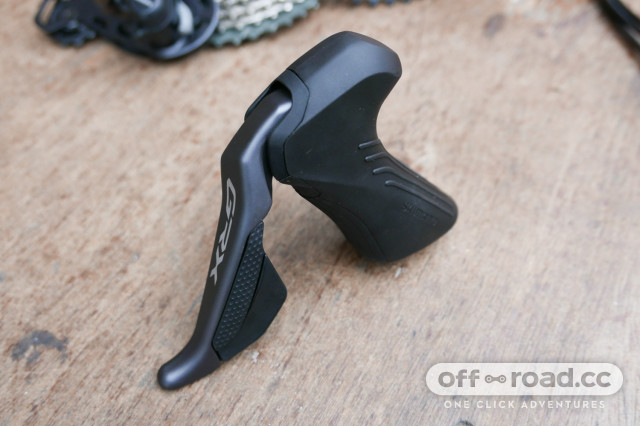 The brake and shift levers are the heart of the Di2 system, allowing you to control the derailleurs as well as the hydraulic brakes. There are a number of cool things you can do with the Di2 setup; you can have a single shifter move sequentially through all the gears on the cassette and chainring, which Shimano calls Syncro Shift - or if you're only running the one ring upfront you can have the left-hand shifter go up gears and the right go down, or vice versa.

Tipping the scales at 205g, a single unit is around 100g lighter than the cable operated variants. As with those, they get taller more textured hoods for better grip than the road units and if you're only after one Di2 shifter, you can use a non-shifting left-hand unit to save a bit of money. 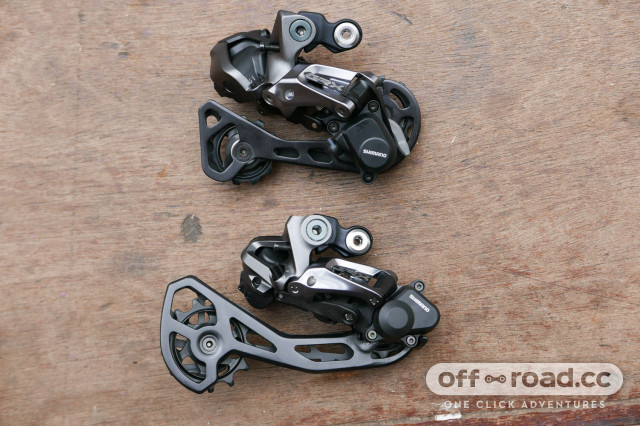 The other essential bit of the Di2 setup is the rear mech, which comes in one of two formats depending on which cassette and chainring setup you're using. Both integrate the servo that powers them in the body of the mech, meaning they suffer a weight penalty compared to the mechanical units of around 120g. 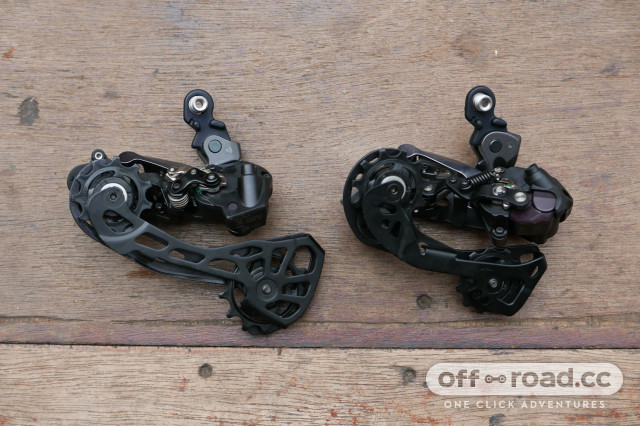 The single ring, wide range RX817 mech has a short cage and can work with a rear sprocket up to 42T and weighs 322g. The longer-caged RX815 mech is designed to work with a double chainring up front and a cassette up to 34T at the back, weighing a smidge less at 289g, rather surprisingly. It also has a larger lower jockey wheel to cope with the more varied chain capacity a double needs.

Both get a switchable clutch mechanism to improve chain retention and you can run them with Shimano's direct-mount hangers or a conventional one. 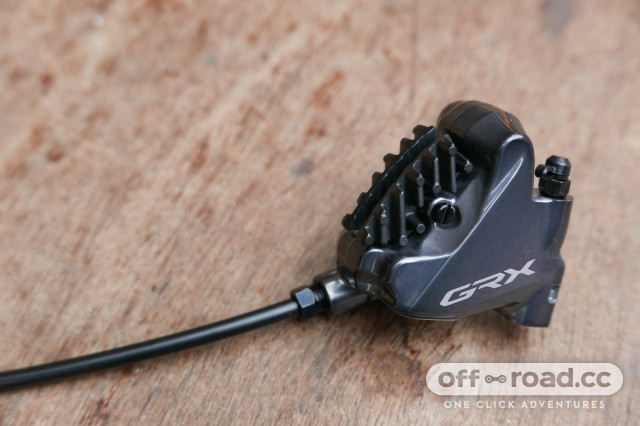 These flat-mount callipers are shared with the cable shifting GRX groupset and are basically the same as an Ultegra hydraulic setup. They can be run with 140mm or 160mm rotors and have finned pads to aid cooling. They're made to be paired with Ultegra level disc rotors, but any of Shimano's mountain bike range will also work just fine. 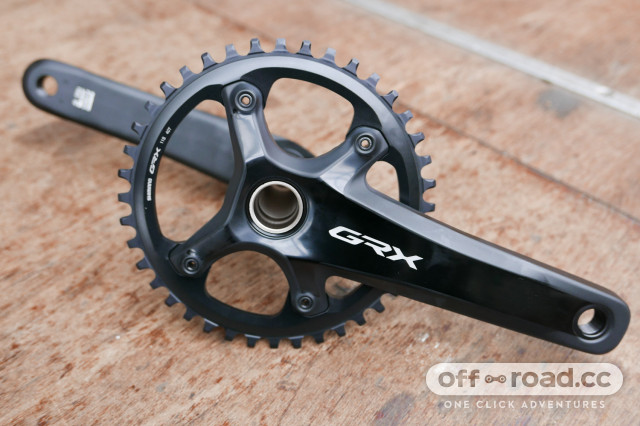 We've opted for a single ring chainset with 172.5mm arms and a 40T ring. Again, it's shared with the mechanical GRX group and has hollow forged aluminium arms and has a 24mm axle, secured with pinch bolts on the non-drive side. There's a narrow-wide profile on the ring to help keep the chain on when it gets rough too. 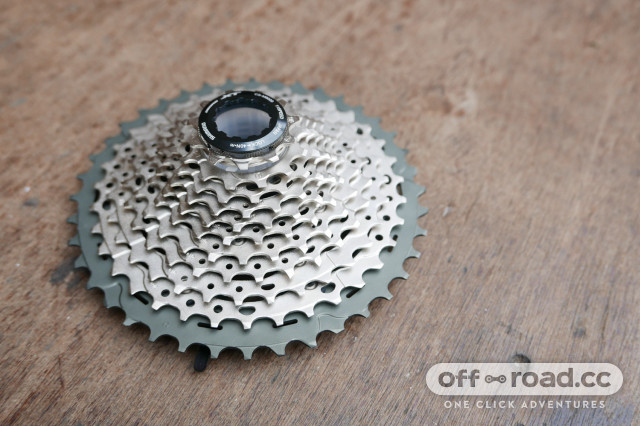 This is the 11-40T cassette from Shimano's XT level mountain bike groupset as GRX doesn't have a specific cassette. It's almost the biggest you can use (11-42T will also work), but only with a single front ring setup. If you want to use a double, then it's an 11-34T or smaller you're stuck with - usually from the Ultegra road line.

For a complete single 40T ring, 10-40T rear cassette Di2 setup, including untrimmed HG701 chain, built-in battery, brakes and 160mm Shimano XT level Centrelock discs but not wheels or bottom bracket, you'll be looking at a total weight of 2,685g. That's about 80g less than the mechanical setup - we've not factored in the Di2 wires, but they aren't very heavy at all.

Cost is a fair bit more, however. Our setup comes in at £1,460, a whopping £736 more than a like-for-like mechanical GRX RX600 setup. If you went down to just one right-hand Di2 shifter and used the non-shifting left-hand option Shimanon also offers, you'd bring the total price down to £1,245. We imagine most riders after a single ring setup will do just that, unless they really want to program in some clever shifting setup.

Big Dave will be testing this little lot soon, so check back for a full review in the fullness of time - the same goes for the mechanical setup, which our Rach will be grinding on gravel very shortly.