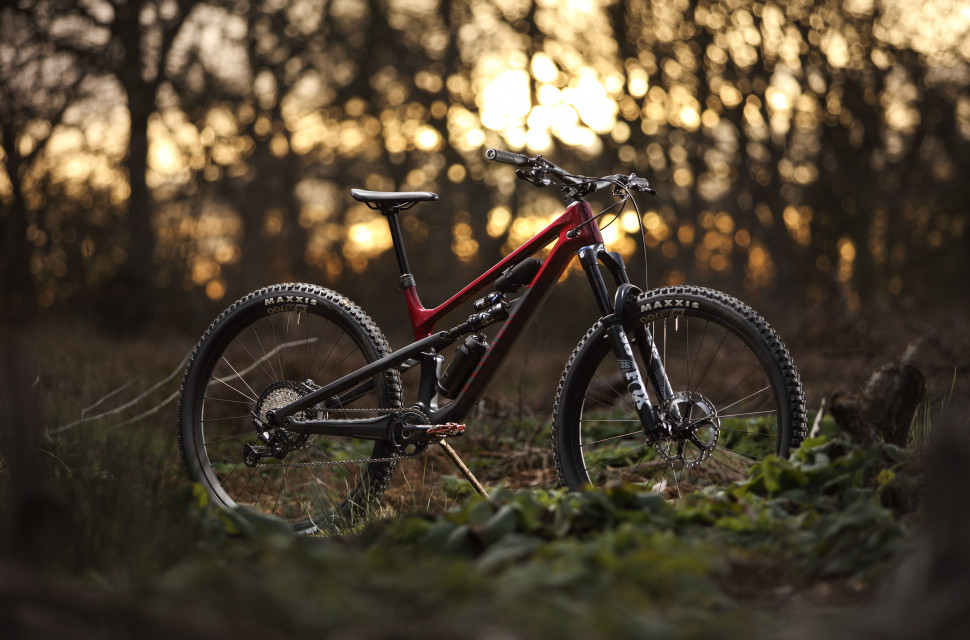 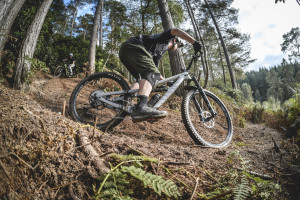 Canyon has just released the all-new Spectral 125. It rocks a whole new frame with far less travel, a 100g weight saving against its heavier hitting sibling and it looks to offer a very different riding experience. We’ve got the Spectral 125 CF8 build in for testing and we've managed to give it a bit of a pre-launch spin. Here are our first thoughts.

With the new launch, Canyon was kind enough to send over a bike for us to take a look at. Apart from that rather sweet new colourway and some visibly slimmer tubing, it looks almost identical to the original Spectral but if we dig a bit deeper, there are a fair few changes that set the shorter travel ripper apart. 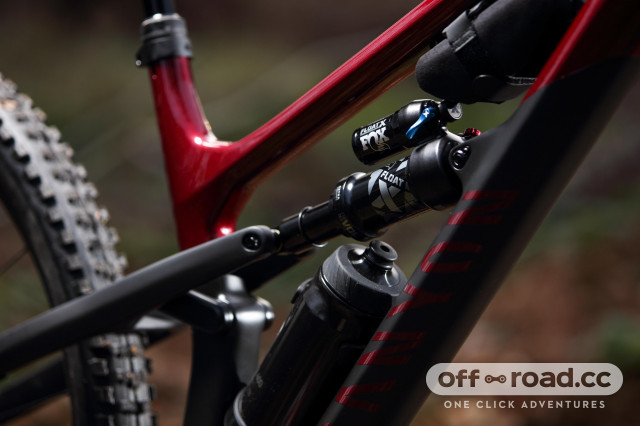 Getting the obvious out of the way, the Spectral 125 gets its rear travel shrunk to 125mm of squish. It's a similar story for the fork too, as that offers 140mm of damping. However, Canyon hasn’t just shoved a shorter shock into the frame, instead, the Spectral 125’s frame is completely new.

First off, the new bike has received a steeper leverage curve with just enough progression to avoid harsh bottom outs while retaining sensitivity at the start of the stroke. It’s also had a boost in anti-squat around the sag point against the original model to make it even more eager on the pedals. That anti-squat drops off quickly later in the travel though.

Then the tubes have been slimmed down to shed some weight and the reach has been stretched by 6mm to enhance stability. In fact, the only thing that stays the same on this bike is the rocker link and the replaceable pivot threads.

The Spectral 125 has also deviated from Canyon’s new norm as it’s only available with 29” hoops. That’s because the brand wanted to wring everything that can be wrung out of that 125mm of travel, in a bid to make it fast and mega efficient. As such, to the designers, 29” wheels make perfect sense. 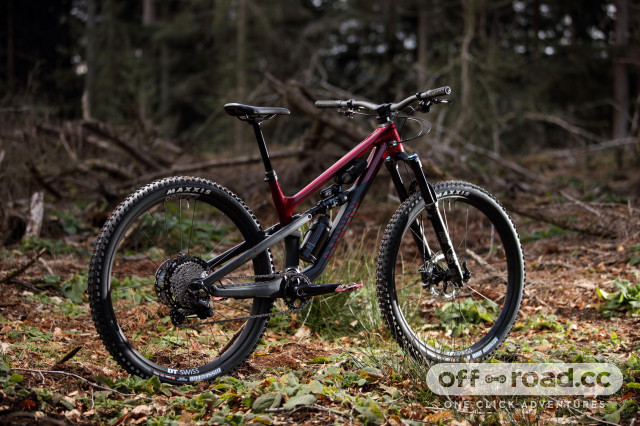 Canyon has designed the Spectral 125 to offer a bit of a different experience to its bigger travelled counterpart. The brand has aimed to create a bike that’s just as fast as the full fat Spectral, but with a livelier ride. With that, a range of very smart kit choices have been made. 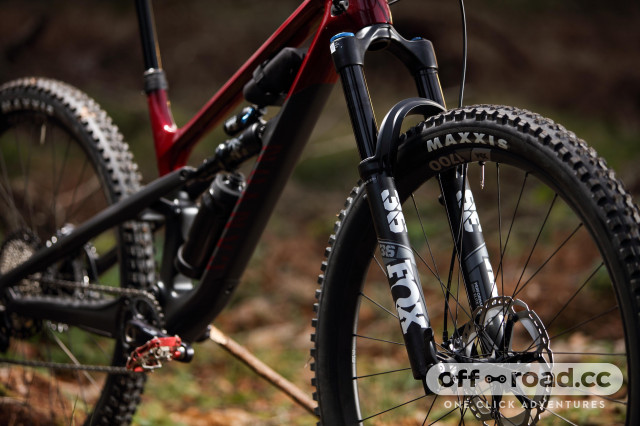 It follows a very similar theme to what we’ve seen on previous and existing CF8 models but the raft of spec choices made to the Spectral 125 CF8 ups the bike’s capability. Up front, there’s a Fox 36 Performance Elite. Now, that's a great choice already has it would have been easy to kit a lighter 34 but the slightly fatter stanchions of the 36 add valuable stiffness. The fork is then paired with a Fox Float X Performance shock.

There are more very cool choices too, including powerful four-pot XT brakes from Shimano, matched with a beasty 203mm rotor at the front with a 180mm disc at the rear. Those slow down a pair of DT Swiss XM1700 wheels shod with a Maxxis Minion DHR II at the front, and my favourite rear tyre, a Maxxis Dissector. Both of those come in slimmer 2.4” widths and lighter EXO casings. All of this will set you back £4,400. 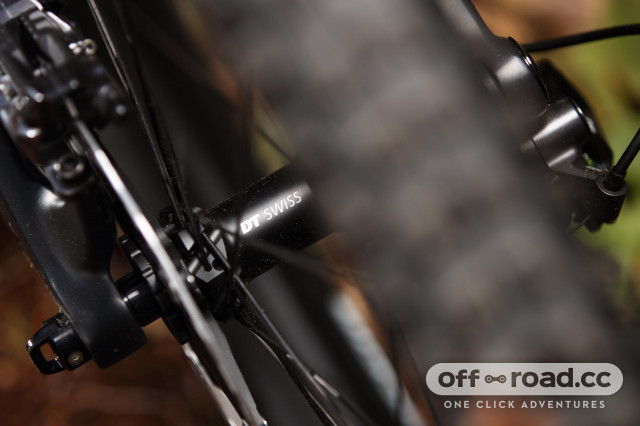 If anyone’s kept up with my Spectral-based escapades, you’ll know that I’m a fan and once word of a small travel bike rocking a similar geometry made the rounds, it got me proper excited. After just three hours on the bike, I can confidently say that it definitely offers up a different experience but one that hasn't fallen too far from the tree.

For example, the Spectral is a pretty spritely bike on the pedals, despite running 150mm of travel; the Spectral 125, however, is even more efficient. The suspension is very independent of pedal input, remaining mostly static while cranking up smoother climbs. Once bumps get in the way, it’s keen to open up, resulting in a comfortable ride and a good deal of traction. Then when that fast rolling Dissector tyre is thrown into a mix, the Spectral 125 is a very quick bike on the pedals.

While the frame itself is pretty different, the Spectral 125 borrows its geometry from the original Spectral. Needless to say, that got my mouth watering. The medium-framed bike on test gets a new 466mm reach but there’s the 64° head angle, and 75° seat tube angle of the bigger bike.

So the bike doesn’t feel a stone’s throw away, apart from the stretched reach figure and its clearly lighter and slimmer frame. That reach, however, did take a bit of adjustment through twistier trails but it was quick to get the hang of and the extra length doesn't come with much of a penalty to agility. Then, once it's shown steep sections, I’m going to go out on a limb here, it feels even more capable thanks to that extra 6mm.

Down the steep stuff, the lesser travel and longer front end, boosts support and it had me going quicker with more confidence. Even when negotiating trails with less of a gradient, I felt totally comfortable regardless of how little travel the bike runs. I found myself plowing through rock gardens, granted with a little more forethought, in total control.

That's in part because of the Spectral 125's fully aggressive geometry but also because the rear end is very nicely damped. I approached the bike expecting a bucking bronco of a ride but in reality, it's incredibly composed and hugs the ground really nicely. It's only when you pump deeper into the bike's suspension that things really get lively. It's on its best behavior, that is until you don't want it to be.

The reduced travel, of course, doesn't offer quite as much grip but that in itself makes the Spectral 125 incredibly fun. Every now and then it'll throw in a little slip, quickly regaining traction, making you feel like a total hero.

As I’ve said, I’ve only spent three hours on the Spectral 125 CF8 but already it’s showing itself to be a bit of a weapon. It’s quick on the pedals and impressively sorted on the descents, regardless of its meager travel numbers. We’ve got this bike in for a full test, so be sure to check back soon for a full review coming soon.