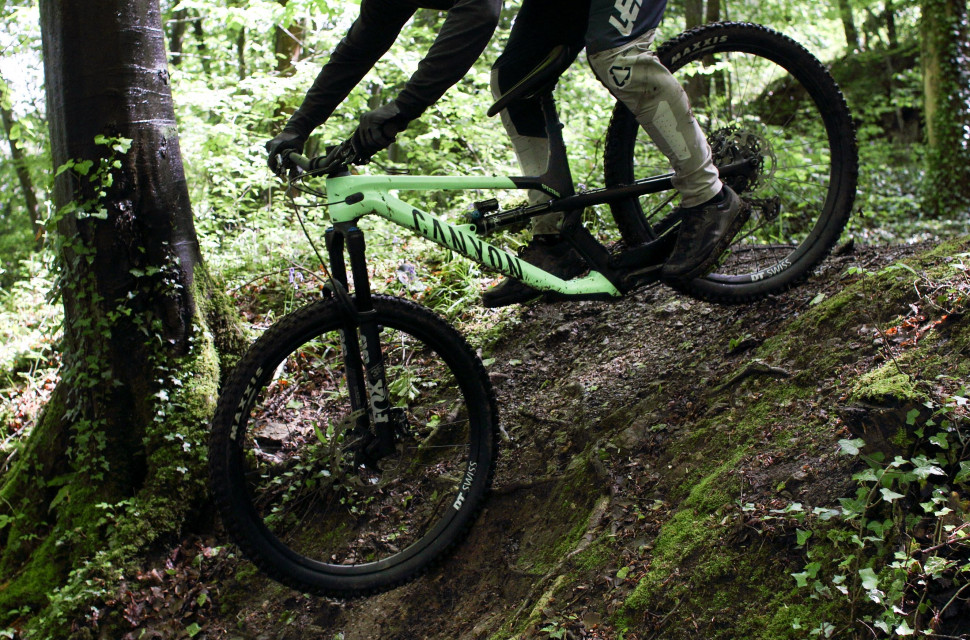 The Canyon Spectral 29 brings big wheels to the beloved Spectral platform. It inspires heaps of confidence with its unapologetically modern geometry and a lively ride thanks to its excellent suspension. Although, its value isn't quite as great as what we've been spoiled with in the past.

Within Canyon's Spectral 29 range you'll find two general builds with four models to choose from with prices starting at £3,600 and topping out at £6,500. Those two general builds are separated by the RockShox equipped all-rounder models and the Fox-ridden Shred models which get 10mm more suspension at the front and a piggyback shock with a slightly slacker geometry. 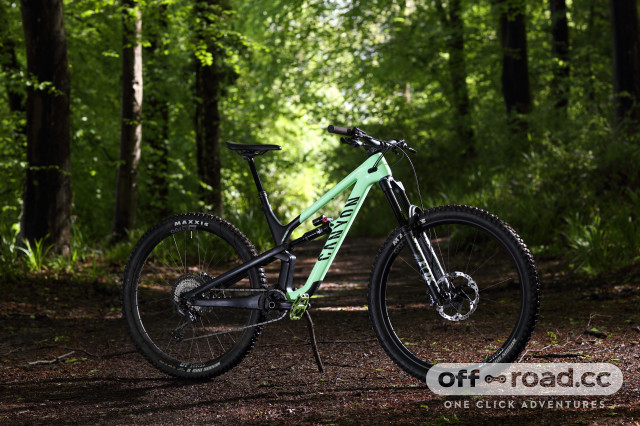 The bike on test, the Canyon Spectral 29 CF 8 is one of those Shred models.

Our Spectral 29 CF 8 is built around a full carbon frame which gets a host of cool bits and bobs that make it prime for the UK’s ever unpredictable conditions. It gets a threaded bottom bracket, and my favourite trick, a replaceable threaded insert for most of the suspension pivots. These are super useful because if you wreck a thread, you can replace it, rather than be forced to bin the whole frame. 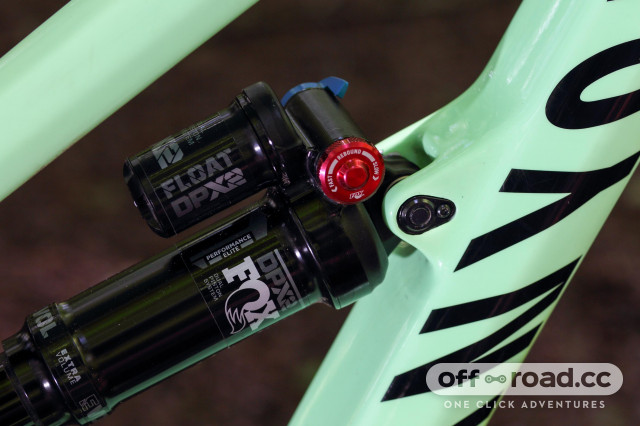 The frame is also internally cable routed, but rather sneakily, Canyon has seamlessly routed the cables from the head tube, straight into the chainstay so you won’t find any excess cable flapping about underneath your bottom bracket. There’s space for a bottle to complete the set-up. 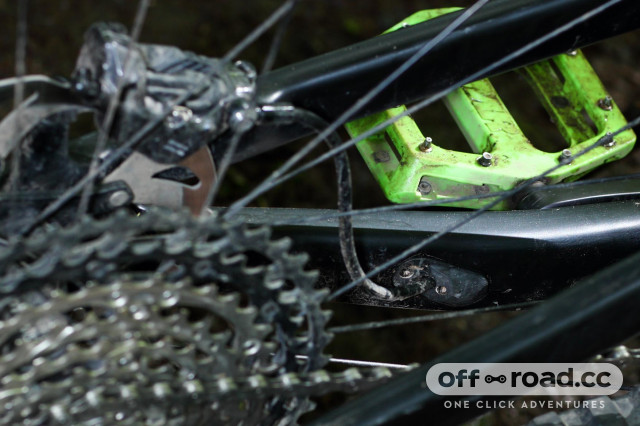 Finally, the Spectral 29 comes with a flip-chip which alters the head and seat tube angle by .5° and the bottom bracket height by 8mm. For the purpose of this test, the bike stayed in the low position. 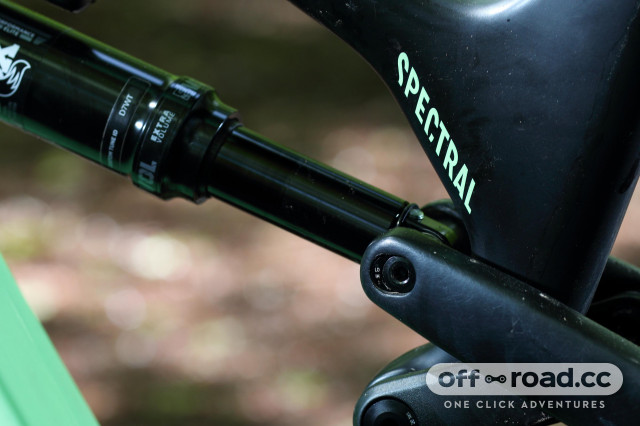 Oh, it would be rude to forget the super useful toolless rear axle that uses a hidden pull-out lever. Handy! 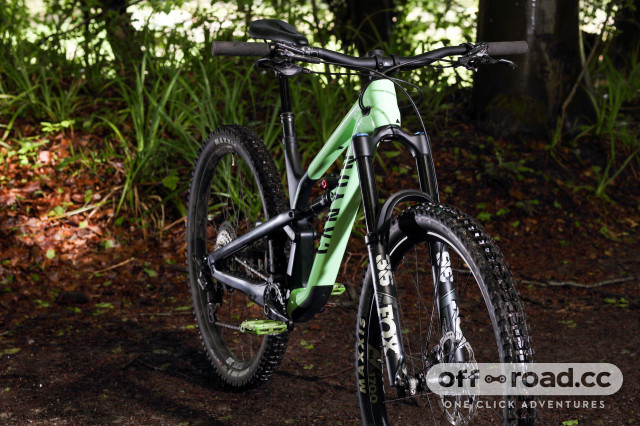 The fork is simply excellent. It’s smooth as butter as it progresses through its travel and small bumps are almost completely unnoticeable. As it gets to its midstroke, you’re rewarded with a very healthy level of support and of course, it’s all mega adjustable thanks to the high and low speed compression, and high and low speed rebound adjustments on the fork.

It is a little bit noisier than the brand’s previous forks however but I reckon it adds to the experience, of riding a mountain bike, listening to the tyres, suspension and freehub working. 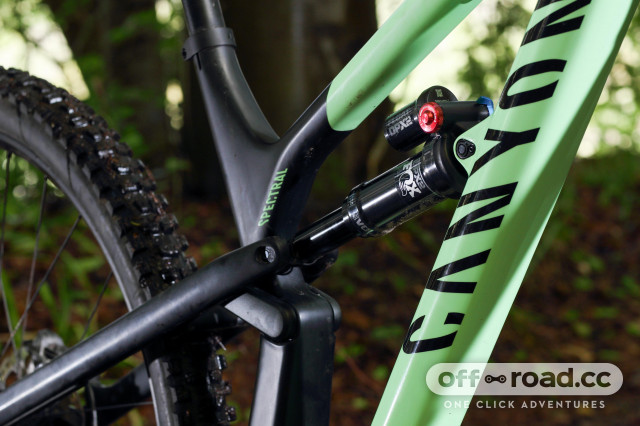 As for the rear suspension, it uses Canyon’s Triple Phase kinematic that was first found on the Sender downhill rig. To start with, it took a bit of figuring out. To get to my sag level, I had to put in a lot more pressure than I usually would because, in the first phase of the kinematic, it’s seriously soft.

Once inflated properly, that phase is still very surprisingly soft but even when just bouncing on the saddle while stationary you can feel the shock firm up in a big way as it hits the second phase. This translates to a tonne of mid-stroke support that is especially noticeable in the corners - It's definitely not a wallowy rear end. Then this takes a pretty hard push to reach the final phase, which offers an impressive level of bottom out resistance. 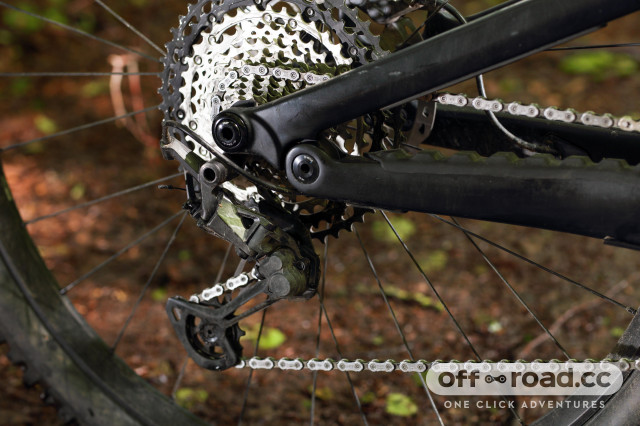 Then, crisp shifting comes from Shimano and the Deore XT line-up with matching four-pot brakes at both ends. 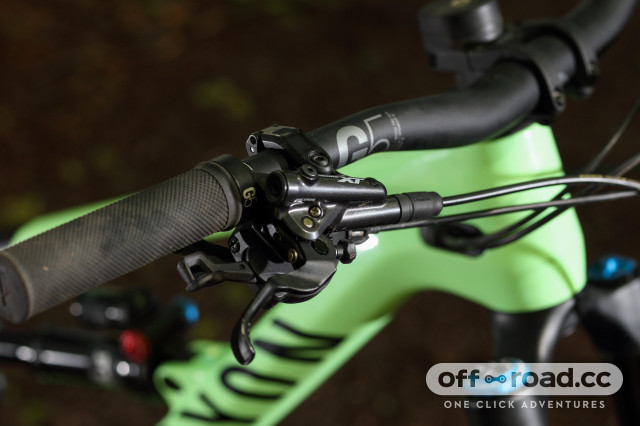 They come with a tool-less reach adjust, a bite point adjust, and on this bike, finned brake pads to keep things cool. Thanks to the four-pot callipers, there's a lot of power on offer too which is very comforting considering the speeds this bike encourages. 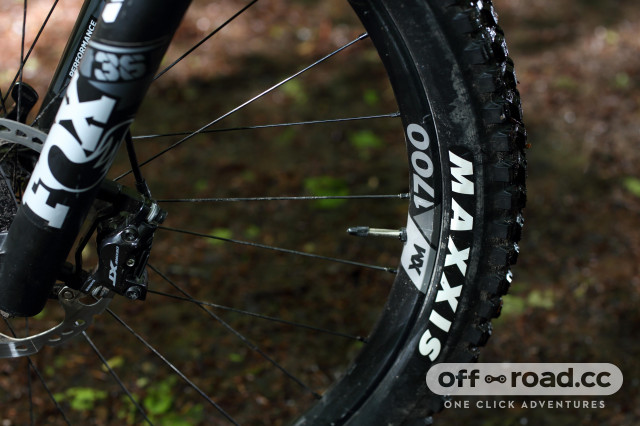 Moving on, the bike then rolls on a pair of DT Swiss XM1700 wheels, paired with a Maxxis Minion DHF a the front and a Maxxis Minion DHR II at the rear, both in 2.4” widths. I’m yet to have an issue with these wheels, they’re light at 1848g and definitely strong. In fact, they’re still running perfectly true after a few months of serious hammering. 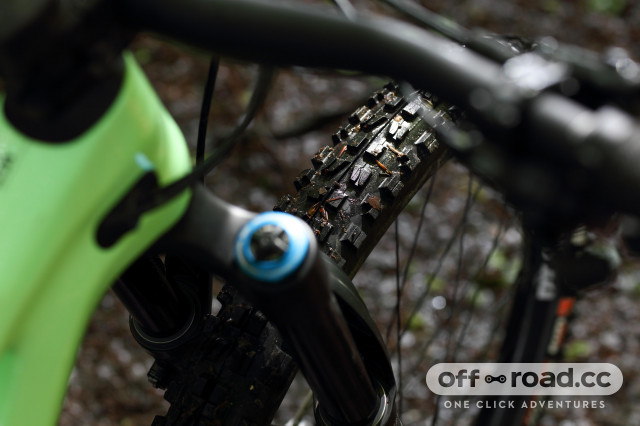 The Maxxis tyre combo here is found on loads of bikes out there and with good reason. They provide a very dependable level of grip over a vast range of conditions, only getting squirrely in proper slop. Though, the DHR II isn’t the best rolling tyre, but it’s certainly not bad. I did find that it’s pretty lock-up happy in dryer conditions, however. 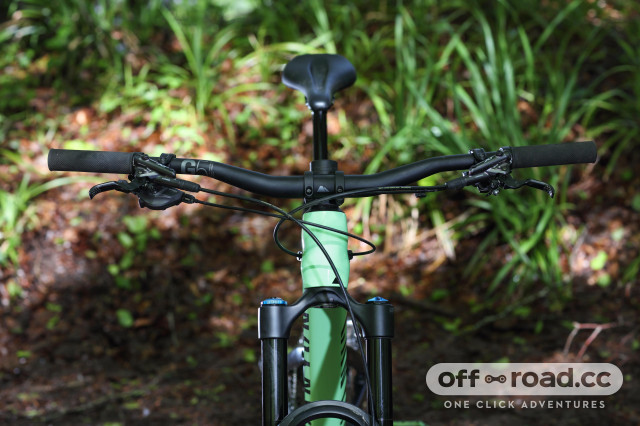 Finishing off with the cockpit, it comes from Canyon with a 780mm wide G5 bar and 40mm G5 stem. There’s also Canyon’s own Iridium dropper post with 150mm of drop on this medium frame.

There’s certainly nothing to complain about with the kit you get on this bike, however, I’ve found the dropper post to be a bit disappointing. While it’s commonplace to find an own-brand unit on a bike of this price, it’s noticeably lacking performance-wise when compared to the pretty blingy kit elsewhere. 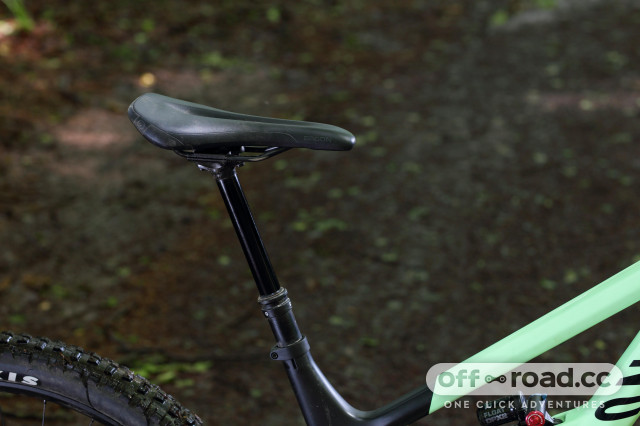 Don’t get me wrong. The dropper post works and so far it’s proven to be perfectly reliable. There's no real reason to warrant an upgrade either, its action just isn’t as sophisticated as others on the market.

Moving onto the ride, it’s mighty impressive. Thanks to the Triple Phase suspension kinematic, the rear end is very well behaved as you wind your way back uphill. Bob is simply minimal. That paired with its 14.4kg (claimed) results in a proper spritely peddler that lets you get away with that one extra climb before the end of the day. 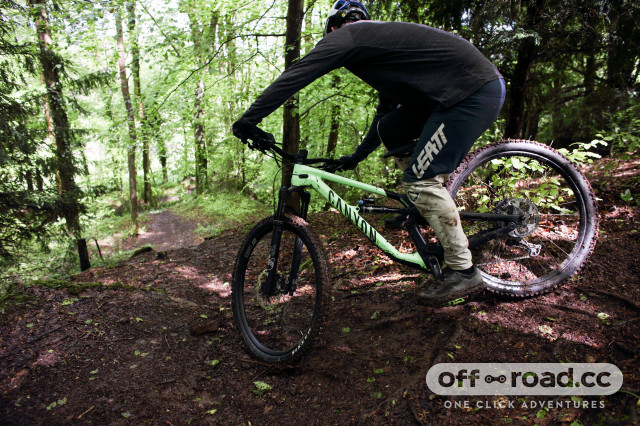 Its pedaling position is also spot on. The bike gets a 76.5° seat tube angle which places you nicely over the pedals without feeling too far forward on the bike. That means that you get an efficient position for climbing, but it can also tackle any tech you’ll find on the way because the front end isn’t overly weighted.

However, its slack 64.5° head angle is something to get used to on the climbs. It’s a little floppy and wandery to start with but some time on the bike quickly fixes this.

Get the bike down your favourite trail and that head angle makes much more sense. Not only does it shift the front wheel further in front of you, filling you with confidence as you rattle down that mega rocky section, but it also helps the bike lean and cling on in the corners. 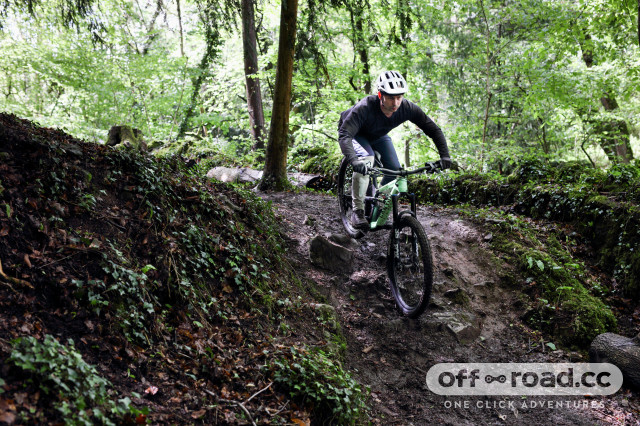 The Spectral 29 comes with a 460m reach which is a bit shorter than I’m used to but its head angle makes up by stretching the wheelbase, to 1,222mm a measurement that I'm well acquainted with and I've found it to be a welcome trade.

That head angle offers a ride that picks up momentum quickly, making the fork work properly through the rough stuff but it keeps you totally in control, even when the trail steepens. It inspires so much confidence that on sections where I would usually dab the brakes, I just haven't felt the need to and that's shown through some seconds slashed off my Strava times. 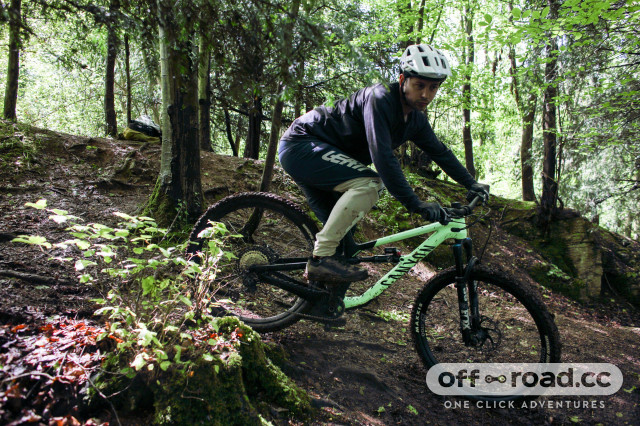 Although if I were to really pick fault with the Spectral 29 CF 8's shape, this bike's head tube is a little tall, something that many Canyon bikes have suffered from in the past. Though on this model, I've managed to get the stem low enough to very nearly match my preference. While this may just be a niggle, if you're looking to upsize, the head tube angle stretches by 10mm on the large frame, so that might put you off the idea.

Back onto the good stuff. You get the most of the Triple Phase suspension when firing yourself downhill. Because of its very progressive nature, the Spectral 29 offers a playful and engaging ride but when the hits get bigger, the suspension remains composed, saving your ankles. 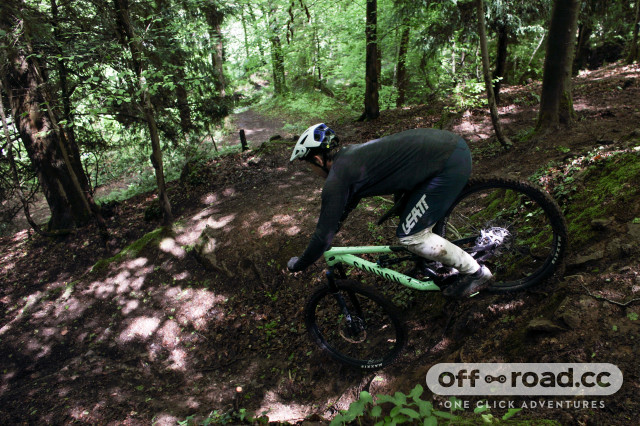 Those looking to monster-truck over the chunkiest of terrain may need to look elsewhere but for those who pick their lines and like a more precise ride the Spectral 29 offers exactly that, with a bit of a get-out-of-jail-free card hidden in the Triple Phase suspension's tough to reach bottom-out bumper.

As for what you get for your money, unfortunately, the Spectral 29 CF 8 doesn’t carry the usually excellent value that we’re used to seeing from Canyon. It’s by no means bad but competition is getting stiff, especially from other direct-to-consumer brands. 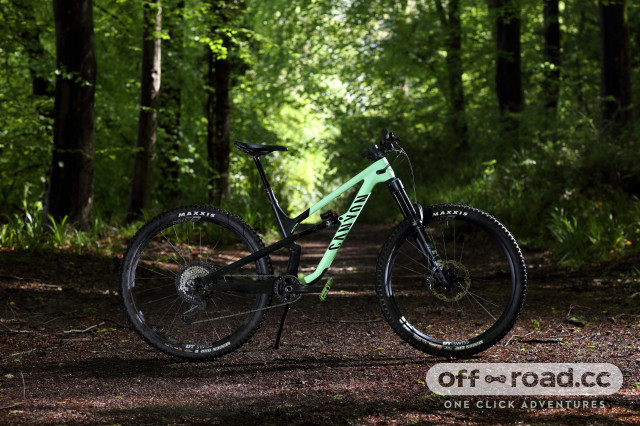 First off, there’s the YT Industries Jeffsy Core 4. At £4,500, £151 more than the Spectral 29 CF 8. It gets a full carbon frame and Fox Factory suspension both front and rear. It also gets a fancy Renthal cockpit. Although, its geometry isn’t quite as progressive, with a shorter reach and steeper angles.

Then there’s the Cube Stereo 150 C:62 which also gets Fox Factory kit, a Shimano XT drivetrain with a price-saving Deore cassette, and a Race Face cockpit. That trumps both the Spectral 29 and Jeffsy with its £4,300 price tag. But again, the geometry is much more conservative on this bike with its 437mm reach for starters. 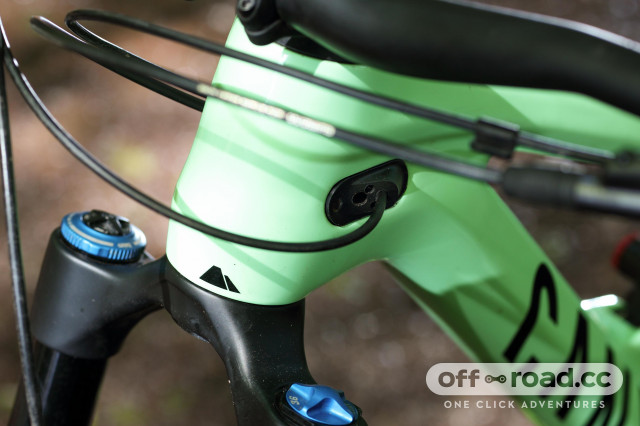 While those two bikes certainly offer nicer kit for the money, and the Cube, less money, what the Spectral 29 CF 8 lacks in top-end kit, it makes up for with its progressive geometry and of course, the Triple Phase suspension.

Although its value isn’t as mind-blowingly excellent as we’ve seen on the Canyons of the past, I’ve kept finding myself reaching for the Spectral 29 CF 8 much more frequently than other bikes I’ve had on test. Its ride is capable, fun, and seriously addictive. Performance downhill is flattering and its solid pedalling platform eggs you on to wrench up one more climb so you can feel like a pro once more before your legs give out.