Skip to main content
Log In Register
Canyon Strive CFR 9.0 Team 2019 review £4,999.00
A great value and mind bendingly fast enduro and trail bike, but the sizing might not suit all 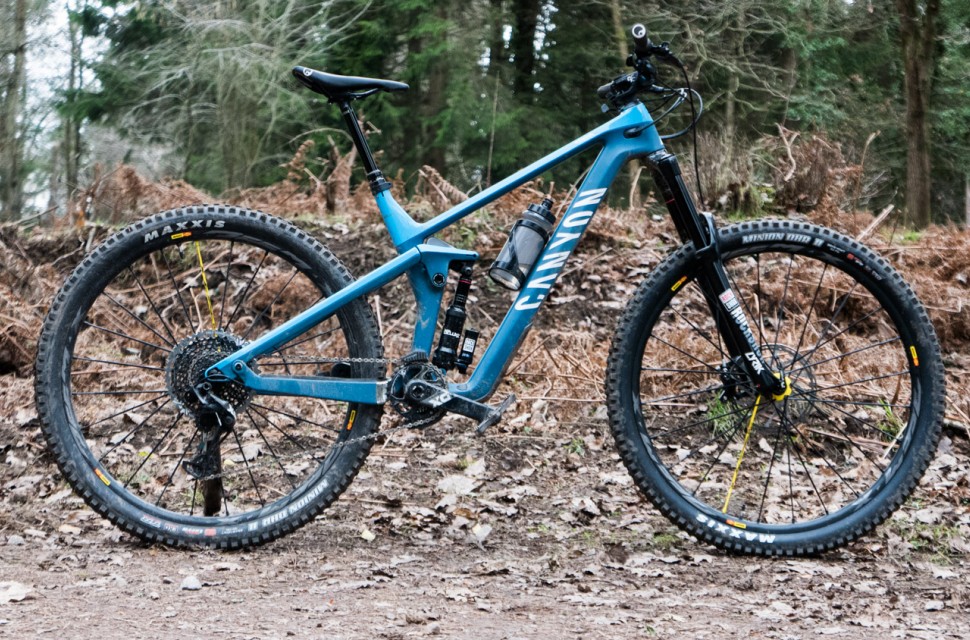 Jon Woodhouse
|
Jan 18 2019
|
Overall
Quality
Performance
Value
What's good?
What's not?
Buy if...
You're after a rapid big wheeled enduro machine with a versatile nature and get on with the sizing

Canyon's totally reworked Strive CFR 9.0 Team is an extremely rapid and long-legged trail and enduro bike that impresses with a much-improved travel and geometry adjusting Shapeshifter system paired to big wheels. It's not the most radical shaped enduro rig out there, but it's blisteringly quick, versatile and excellent value nonetheless.

For 2019, the Strive has seen some serious changes, with a move to 29" wheels from the 27.5" of old, geometry tweaks plus a move to short offset forks and the 'triple phase' suspension kinematic system first seen on Canyon's Sender downhill bike now delivering 150mm of travel at the back paired to 170mm up front. The whole range now gets all-carbon frames with the top two level models - of which this Team is one - getting a lighter carbon layup.

The 'Shapeshifter' geometry and travel adjusting system was also seen on the old bike but it's working parts re-jiggled by Fox, with a new, reportedly more reliable gas piston actuating a linkage that now changes travel from 150mm to 135mm on the fly. Pressing the neat, all-new two-button remote also adjusts the geometry, making the bike have a steeper seat and head angle plus higher bottom bracket in the short travel mode, as well as changing the anti-squat figures of the suspension for a perkier pedalling feel. 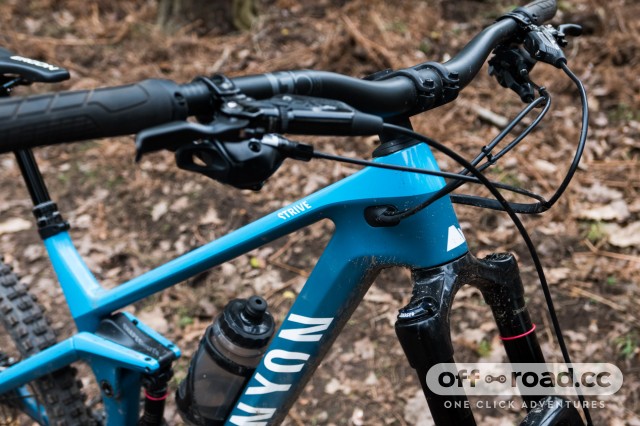 This 'Team' model is second from the top in the range and it shares a lighter 'CFR' carbon fibre layup with its pricier range 'Ltd' sibling that's said to drop 300g from the frame weight. While the 'Ltd' is shod with all Fox Factory suspension, the Team bike gets a RockShox Lyrik RCT3 up front with its buttery smooth Debonair air spring and the well composed Charger damper delivering 170mm of bounce. 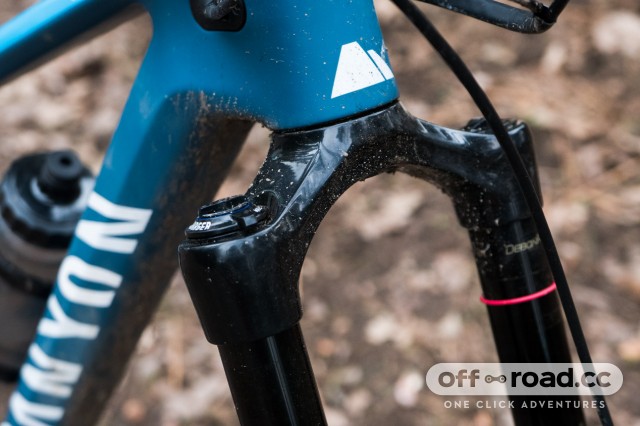 At the back, there's a RockShox Super Deluxe RT3 shock and SRAM also provides the drivetrain with a complete 12-speed X01 Eagle groupset doing the go bit, with dinky 165mm length carbon cranks improving ground clearance. The superb Code RSC brakes getting things all back under control with a 203mm rotor up front and 180mm at the back - though I reckon you might want to go bigger at the rear if you are a heavier rider or live in big mountains. 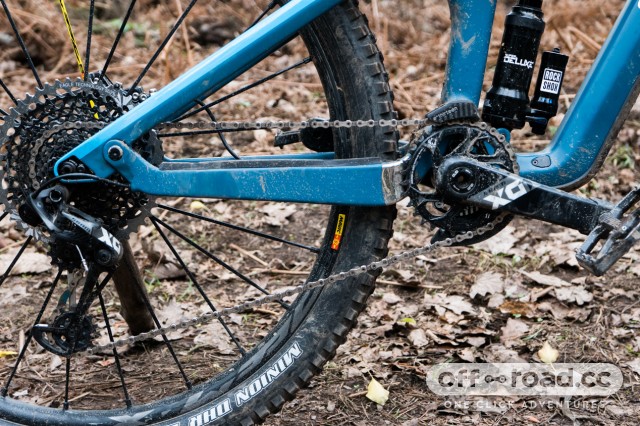 Mavic's Deemax Pro wheelset isn't the most common sight but the unique Zicral aluminium spokes and clever rim drilling is an extremely well-proven and tough design that's also decently lightweight and the rear hub has a respectably rapid pickup too. At 28mm internal width, they give a decent shape to the rubber too. 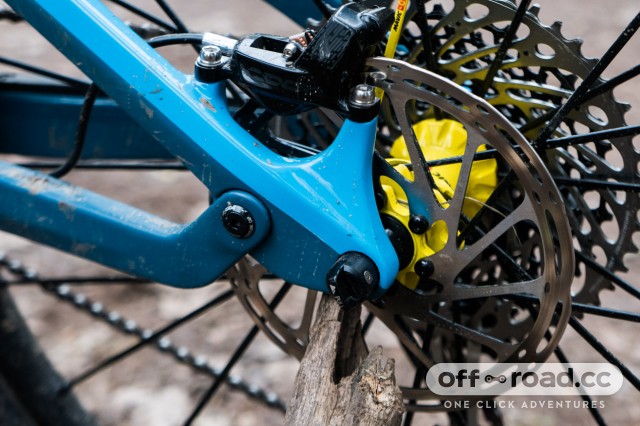 Canyon has specced Maxxis Minion DHR II tyres in 2.4" Wide Trail format both front and rear. It's also nice to see that someone has paid attention and selected a sticky MaxxGrip triple compound for up front and a faster rolling MaxxTerra mixture at the rear, though I suspect the really rowdy riders might want something with a heavier casing than an EXO TR at the rear at least. 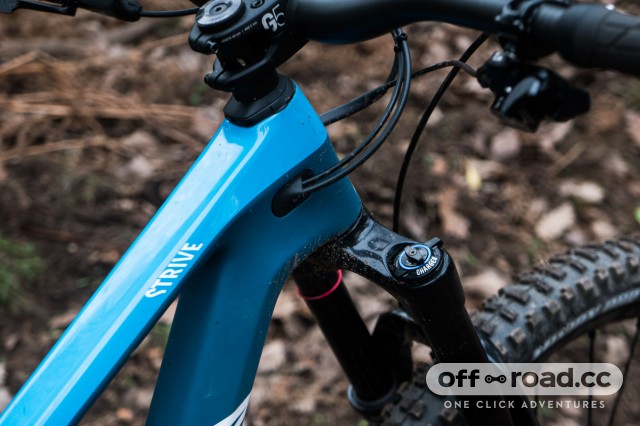 The Strive has also seen some geometry tweaks over the old bike. Despite the shift to big wheels, head angle remains at 66º in downhill mode and the seat angle is 75º in the climb model - those change to 67.5º and 73.5º respectively. At 435mm across the board, the stays are pretty short for a big travel big wheeler too, though a fair bit more than the 423mm of the old bike.

The bottom bracket height has also been shifted from 340mm to 336mm which, given the large wheels, means that there's a fair old drop below the axles to increase stability. Ground clearance is retained by using dinky 165mm crank arms across all sizes.

When it comes to reach and seat tube sizing, it's a bit longer across the board but strangely it isn't that consistent across the different size bikes. A large has 470mm on a large, paired to a 455mm seat tube - that works as a ratio of about 1.03. That contrasts with a medium being 440mm reach for a 440mm seat tube - a ratio of 1. That seat tube/reach ratio disparity is seen with the small (1.03) and extra large (1) too.

Canyon explains this by saying that they use rider height data to generate the best seat tube length for the saddle height requirement with dropper post length factored in and do the same for reach, though taking "rider feedback as well as changes in wheel size and developments in geometry trends" into account as well. 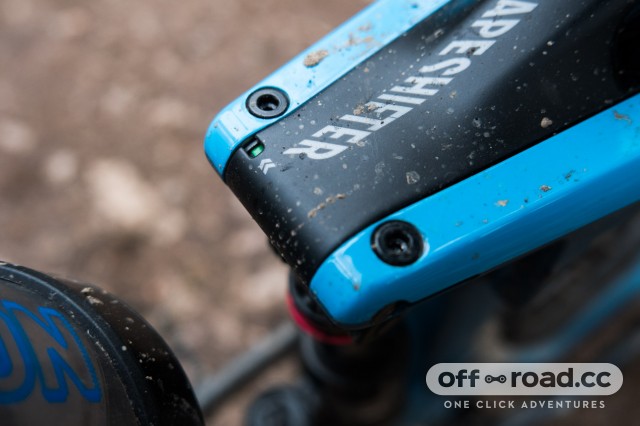 Either way, at 172cm tall, I opted for the Large, which comes with a 150mm dropper post that I could just about run at full extension. The reach felt good paired with the 40mm stem and the 780mm bars fitted. If I was a bit smaller, I suspect I might be hankering after a spot more reach relative to the seat tube length if I was aboard the medium, however.

I rode the Strive on a wide variety of local trails, with everything from seriously steep and full-on technical runs not far off what you'd find on an EWS course to more flowing and flatter singletrack more in line with 'normal' trail riding. The one instant takeaway from all that is that this is a bloody quick bike, both up, down and along.

The extra rotating weight of those big hoops does mean it can take a bit to pick up speed on the flat, but if gravity is on your side then it's extremely good at holding momentum through trail chatter and in corners - you can really get this thing going when scything through fast, linked turns where the bike really hunts out mid-corner grip and doggedly sticks to a line.

The low bottom bracket  does help in that regard, though I do feel that it does come somewhat at the expense of agility when you want to change direction rapidly; you end up fighting your own body weight as you try to switch from corner to corner, even though the bike is nicely settled once you do get it there. 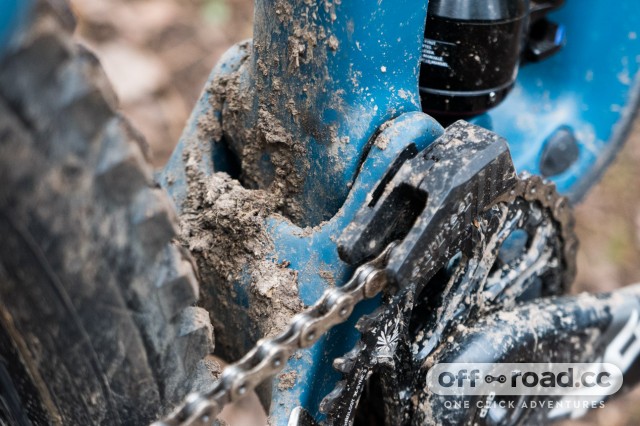 Despite all the rotating weight and the slammed bottom bracket, it's still pretty damn handy when you get stuck into super tight and techy corners. It does take a bit more conscious effort to muscle it about when you're fighting to make last-minute line adjustments and if you miss your braking point and try to slap on the stoppers mid corner then it wants to sit up, but that's more a function of the wheelsize and the adaptations in riding style needed to make the most of them.

When it comes to outright suspension performance, the bike really is very good, with a nice and supple initial bit of travel that ramps up nicely to give good support towards the end of the travel without an overly harsh rise in resistance when you hit some ankle-snapping compressions. Unlike a lockout/compression adjustment system, the bike still feels totally useable in short travel mode too, which is one of the big benefits of the Shapeshifter.

While the Lyrik fork doesn't put a step wrong up front - it's really well composed, stiff and the initial traction from the large-volume negative air spring is best in class, I'm not hugely keen on the feel of the Super Deluxe at the back. It's well controlled and doesn't display any bad behaviour when it comes to damping, but it can feel somewhat hyperactive in the feedback it offers - think excitable spaniel rather than the more languid hound that is a Fox rear shock. That's very much a personal preference, however; I doubt there's much (if anything) in it in true performance terms. 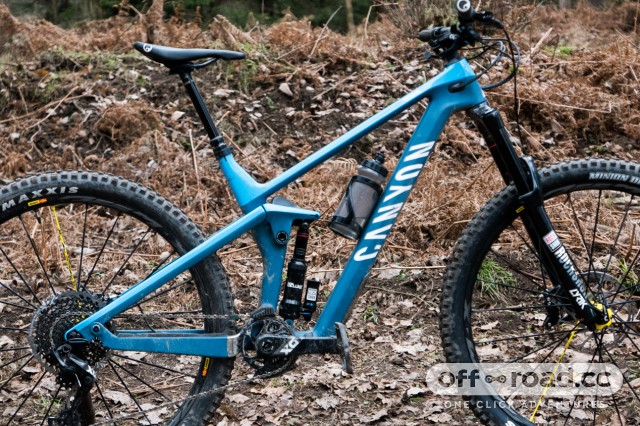 When it comes to how the Shapeshifter performs, it's without doubt much better than the old design. It actuates much more intuitively - well, simply by riding - rather than the old design that required an awkward lurch to help switch settings. The new lever is also pleasant to use, though as it's stacked over the dropper post remote (it works with both cable and RockShox' hydraulic setups) it does take a bit of getting used to, though it's possible to tweak positioning on the integrated brake lever mount to get it in the sweet spot. 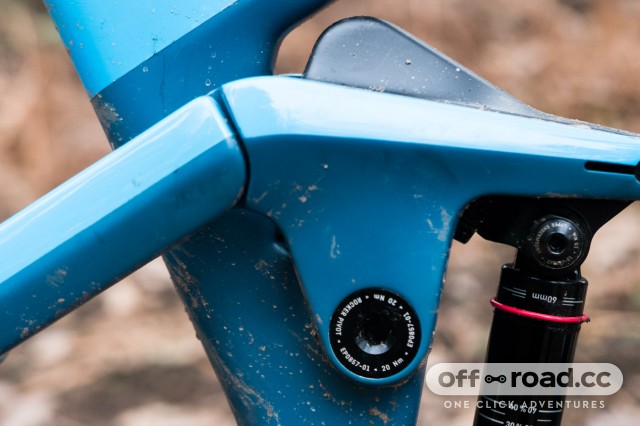 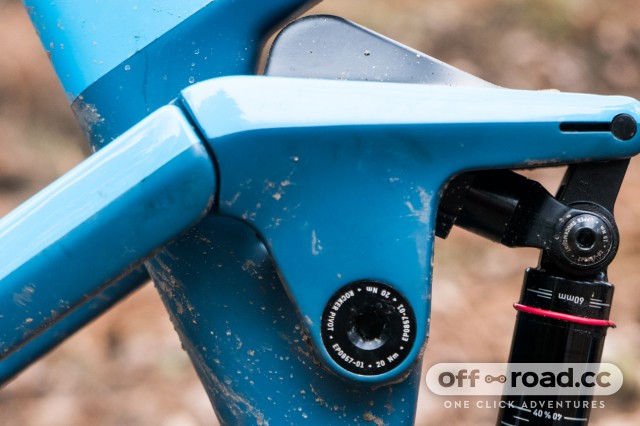 While the head angle doesn't exactly feel steep in the downhill mode, given that it's possible to adjust the geometry so easily on the fly, taking a little bit more off would make sense to me - it'd make the bike even more capable on really steep sections and enhance the already world-blurring speeds you can attain comfortably. The same goes for the seat angle; 75º is okay, but when you can shift 1.5º at will, making it steeper as standard and then extra-steep for climbing would make a lot of sense. 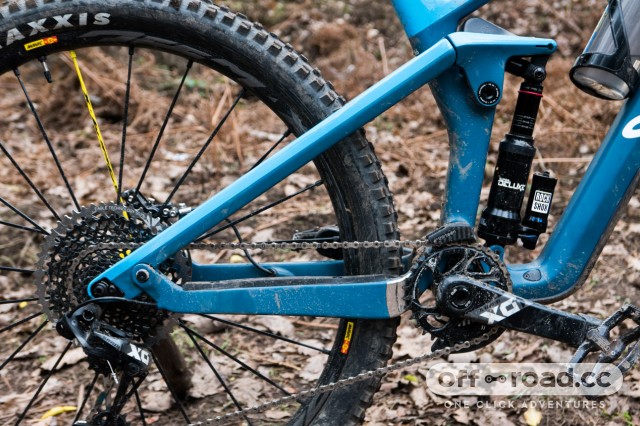 While having a simple remote lockout would help spice up pedalling performance as well as being lighter and potentially more reliable, I do think the Shapeshifter is much more than a gimmick and does offer useful benefits - though pushing them to a bit more of an extreme would showcase that better. A bike with a really steep seat angle for climbing and then a properly choppered out head angle would truly be a bit of a lycanthropic effort, nice and civilised when you want it to be but a bit of a monster on demand. A touch more reach across all sizes wouldn't be remiss either, though that'd be more keenly felt on the medium and extra large, I suspect.

There's no doubt in my mind that the Strive CFR 9.0 Team is a very well-rounded package that delivers blistering performance thanks to well-sorted suspension in conjunction with an excellent spec for the cash.

When it comes to the handling, I got on well with the sizing and shape of the large, though the disparity between reach on each frame size might make that less applicable to taller or shorter riders. It's not extreme by any means and I do think the Shapeshifter - which does work well despite my misgivings - was a bit of a missed opportunity to offer something a bit more radical, seeing as toning it down would just be a small lever press away.

That said, on the right trail - and even on ones where a longer travel 29er shouldn't really shine - this is a bike that can deliver ridiculous speed and entertainment. On fast, flowing but still steep and rough trails I found myself struggling to mentally keep up with how much pace it wanted to carry, even though the bike was still really well composed. If you're after a long-legged enduro or trail bike for all sorts of adventures, there's an awful lot to like.