Skip to main content
Log In Register
Jones Plus SWB Complete review £1,423.00
A versatile bike that can handle every discipline, but doesn't necessarily master them all 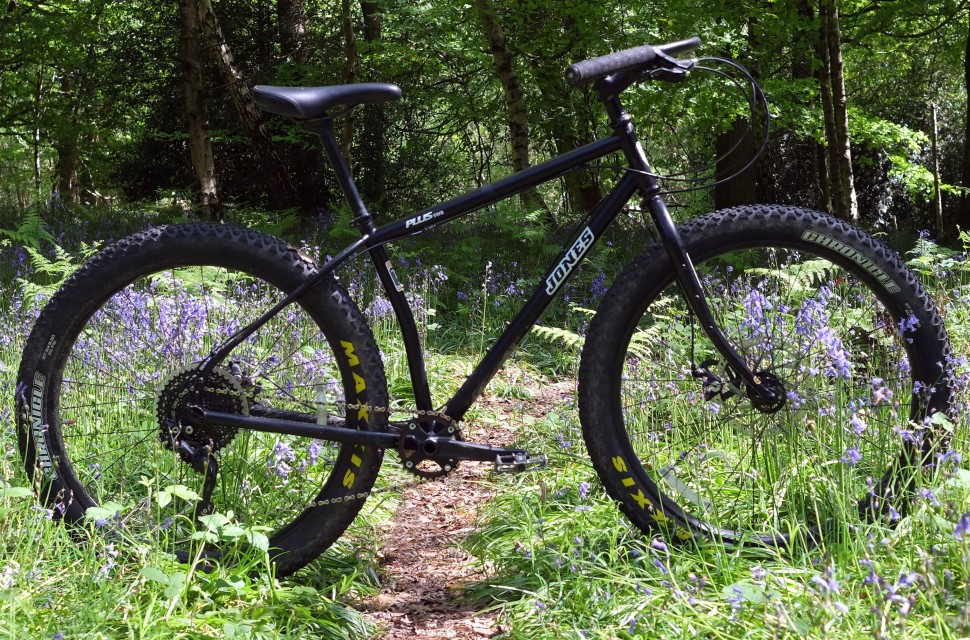 Jim Clarkson
|
May 30 2019
|
Overall
Quality
Performance
Value
What's good?
What's not?
Buy if...
You are considering a Jones custom or want a versatile everything, every day bike

The Jones SWB is a complete bike, designed, specced and approved by legendary custom builder Jeff Jones as an all-rounder, only built in Taiwan to create a lower-priced option. It doesn't have the unique truss fork but does have the bar and geometry that he's known for. It's a way to get on board a Jones at a more affordable price but the handling is unlikely to suit everyone.

The Jones SWB is aimed at ‘dirt, road, mountains, gravel, city, touring/trekking, bikepacking, commuting, fitness, riding around the world or just around your neighbourhood’ which makes it sound like it can do everything. The issue is that what Jeff has done here is focus on exactly what he believes is the perfect bike.  It’s a sort of a multi-tool or pen knife; it has lots of options and abilities, and it can do a lot of things, some really well, and others not so much. This isn’t a bad thing, I just feel it tries to accomplish too much when viewed in the context or focus of a mountain bike abilities.

On first look, the immediate points of notice are the large volume, 3" 650b Plus tyres, the extreme fork rake and the unique looking Jones H bar. Looking more closely you start to notice a heap of other unique additions in the geometry, spec and the finishing kit too. Jeff aims to make a bike that can handle a multitude of riding use, rather than just a pure mountain bike and his custom creations have a dedicated following thanks to his unique take on bike design. 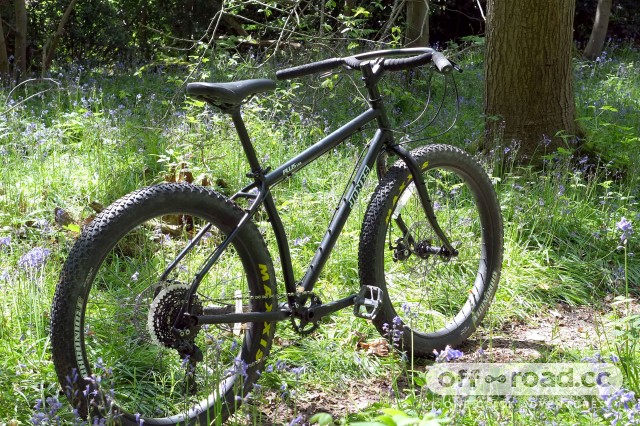 The geometry is quite a move away from the current leanings in mountain bike geometry towards long and slack. The thing is, there isn't really anything to directly compare the Jones to in the mass-market  - its a pretty unique setup, which will be the main attraction to a lot of potential buyers.

The Jones head angle is 69° with a 72° effective seat tube angle. Both steep and slack by the standards of conventional bikes but again, this just isn't comparable to other mountain bikes. I feel there is a conflict with the moderately long wheelbase at 1092mm on the medium tested and the fairly cramped reach. The frame and fork are designed to work together - there is plenty of information on the Jones site if you want to examine the reach, rake and so on. There are quite a few things that will alter and vary the ride feel, and I kept everything stock as supplied for the test period.

It's built from good old 4130 Chromoly steel with butted tubing, is obviously heavily aimed at having the option to carry things and there is quite the utility feel about it. There is little extra detail from Jones on the butting, but its really well put together with good consistent welding all over it and finished in a fairly durable black with semi-mat finish lacquer.

The SWB has a 12mm rear axle, which great for keeping the frame feeling tight, it still retains the usual compliance of steel - its no magic carpet ride feel, but it’s comfy without being too flexible. There are plenty of rack, bottle and other mounts in all the right and useful places across the frame. Heaps of mud clearance even with the large tyres, and no chainstay bridge to platform trail mud up on. The bike is set up 1x10 and there are options for a front mech if required. 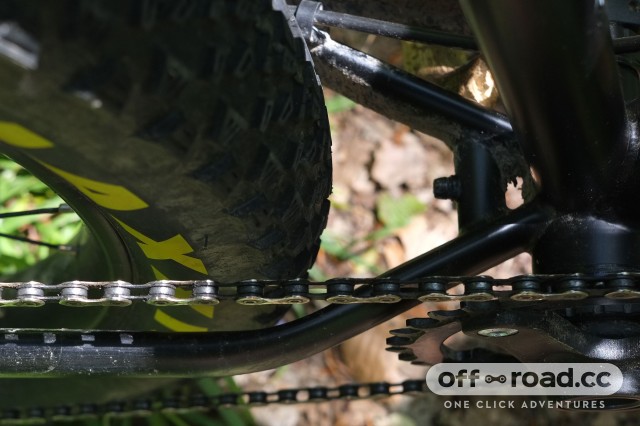 The steel Jones SWB Unicrown fork has a straight 1.125" steerer tube and butted tapered and ovalised legs. These have four bottle style mounts and then eyelets on the dropouts - I carried water bottles on the fork when using a frame bag. The fork has a wider than standard 150mm bolt through axle hub that delivers decent tracking and a solid feel to the ride. My slight issue is that for a bike that might be used for long distances and in remote places, its perhaps not the most easily repaired wheel if really damaged - or more crucially, replaced. 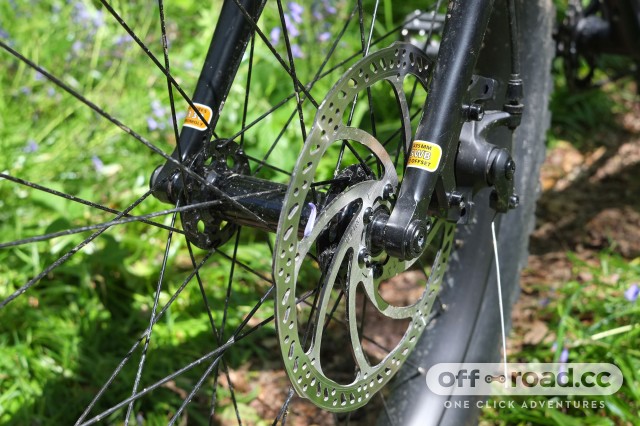 The overall spec is pretty no-frills, no-name stuff with a few good quality, standard brands like the Zoom stem, Sunrace cassette, Shimano Deore drive train with some obvious compromises on certain parts for cost, like the solid two-piece crank with a steel chainring - added for toughness and long life I’d assume.

The hubs are unbranded but well made, with a Shining DB-X50 rim that is double walled and 50mm wide which gives great shape to the tyres. It also has a bead lock design that aims to keep the tyre on the rim even at lower pressures. It came with tubes but it's all tubeless ready. The wheels are well made and stayed true and round despite my best heavy-handed use on them. the combination if wide and strong with big tyres makes them pretty indestructible which gives a little more positive spin to their use in remote or far away places.

The brakes are cable actuated Tektros and I found they never have the same power or feel as hydraulic brakes, and although they are easily serviced, I don't think they are the best option for mountain bikes and lacked the power and bite of other brakes. There is a 200mm rotor on the front with 180mm on the back, this goes some way to increase the stopping power and has positives in the cooling on prolonged descents or heavy braking.

It has to be noted that the bike looks the most like a mountain bike, but when riding, the feel is a blend of different bikes. It rolls and handles way quicker than you might think, the steering is immediate and nimble - at times surprisingly so. It took some adjustments in my riding style to get the best out of it. The ride position is very sit up and feels short - the bars move your hands back and in, with your elbows moving closer to your hips. Initially, this feels sort of cramped, but it's more the different position that feels weird. 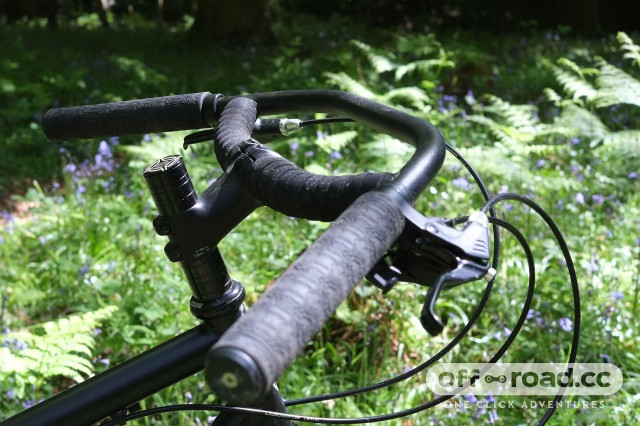 Sure, it can ride up steep climbs with a winch-like ability. The big tires give a huge area of contact that allows grip, especially at lower pressures, but probably not more than a full suspension bike with decent tires.  It doesn’t descend with the same abilities as one of those either as the softer, larger tyre pressures create a lot of deflection and at times odd trail feedback.

It climbs steadily and I found it a better climber when seated. Standing up, I’m not a fan of the H-bars, they feel odd and whilst I can see this is personal preference, I miss the ability to pull on the bars in my usual place. This feeling didn't change over the test period. Riding on tight, twisty singletrack, I found myself nervous at points really pushing hard into tight corners, with the feeling of the fork tucking under - any sudden, jerky changes of direction - swerving stumps or rocks, resulted in a higher degree of uncertainty at times.

With longer more flowy trails, the SWB really got into its groove, and it's on these sort of trails, it comes into its own, with the large volume tyres maintaining speed and bringing that larger wheel feel to the bike. 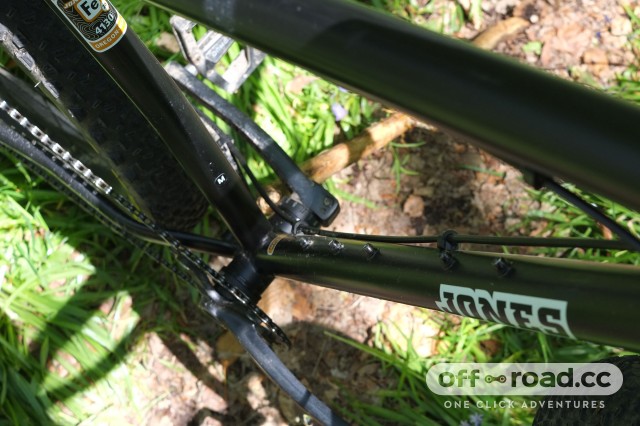 I found myself most enjoying the bike on a long day of bike packing, fully loaded up, and trundling across mixed terrain, with lanes, fire roads and single track all featured. It's got the reassuring capable feel, and crucially rides quite‘light’ despite the large tyres, as the rolling resistance isn't a huge problem, but it's not a bike that responds well to sudden burst sprinting - this is very much a steady away when loaded ride.

Unloaded, it always climbed well seated, I didn't get on with it so well out of the saddle, the issue with the H-bar and me again. It has to be said the H-bar is great for having several hand positions, and plenty of room for gadgets if you are so inclined.

Oddly, I wouldn’t say no to owning this bike, I like a lot of its characteristics and its sort of chameleon. The bike highlights its own drawbacks quite obviously sometimes - for instance the balance point when jumping or endoing it was surprisingly small - which took some time to adjust to. There are some many options on set up - Jeff has some great resources on his site to aid this, and his reasoning and experience are worth the time to help with getting the bike to work best.

Its a bike that is very able to change and cope with a rider who wants a lot of options from their bike - but I feel like there are a lot of compromises in the ride if focussing on its more ‘MTB’ side. Viewed as more a general all-around off-road bike, its capabilities are far more. The strengths are its very positive rolling capabilities, its ride when loaded, and the options on the terrain you could take it, to a point. For me, its an all round bike, not a pure mountain bike - and I think appreciating its diversity and capabilities is the key to enjoying it.

The bike is currently available in the US, European distribution is to be confirmed - the price is $1799 but you'll need to budget for shipping and customs charges on top of that. You can get in touch with Jones directly via his website or speak to Biff, his man in the UK, if you're interested.