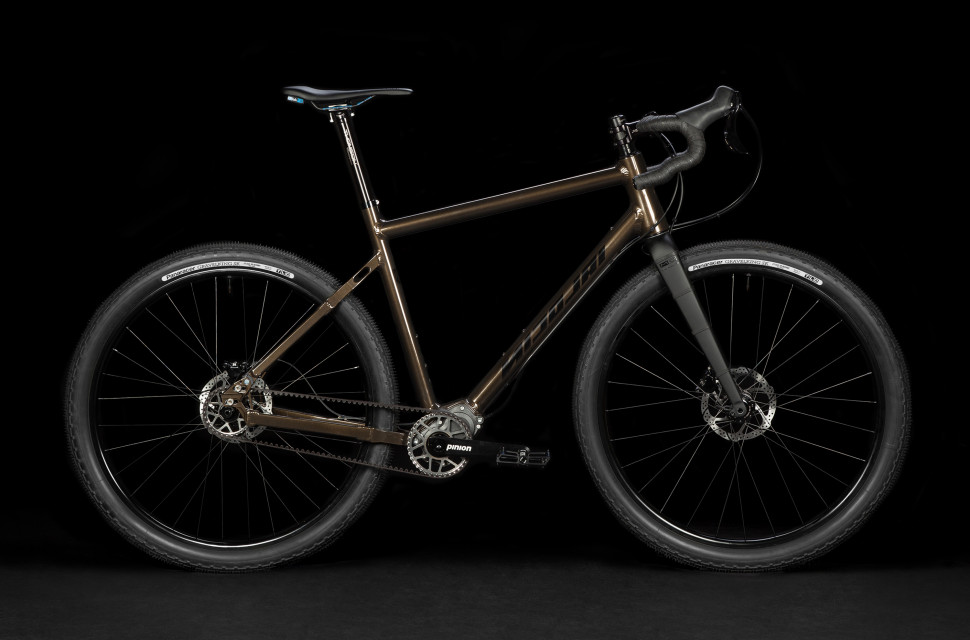 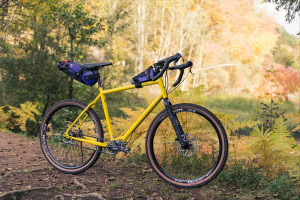 After the successful launch of the Argon GX, in true Nicolai form, the brand has now released a model kitted with a PINION gearbox. The Argon GX Pinion is a bike that's made to take on the rigours of road riding right through to off-road trails whilst fully laden but benefitting from lightning-fast, precise shifting of a gearbox drive system.

The Argon GX Pinion's 7020-T6 aircraft-grade aluminium frame is designed to be torsionally stiff with the aim of transferring pedal power directly into forward propulsion. Adding to the bike's rigidity are 142 x12 thru-axle dropouts.

Nicolai has noticed other brands making use of flex stays and elastomers as a method of making a gravel bike more comfortable to ride but the brand has ignored such fashions, instead relying on the bike's tyres for a cushy ride. As such, the bike can accommodate up to a 650bx50mm tyre. 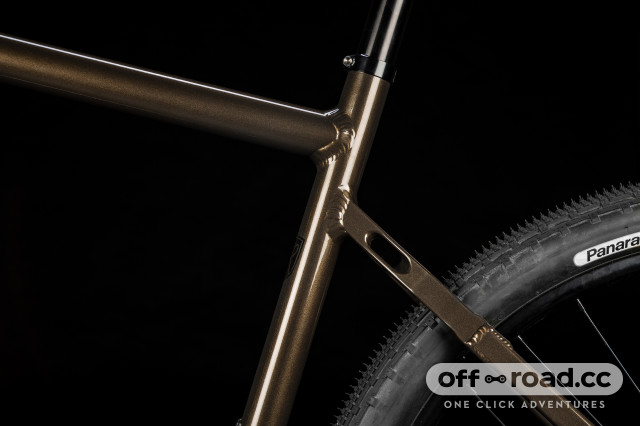 Adding some extra comfort, the Argon GX Pinion is built with a short seat tube, which allows for longer extension of the seat post. This makes use of a natural flex in a seat post, further increasing comfort. However, the frame is also compatible with suspension forks with up to 40mm of travel, an option you can choose upon checkout.

Of course, the bike is built with a PINION gearbox, and the brand offers two versions. There's a choice between the 18-speed model and the 12-speed model with the former offering a 636% range weighing in at a claimed 2,700g, and the latter a 600% range with a claimed weight of 2,280g. 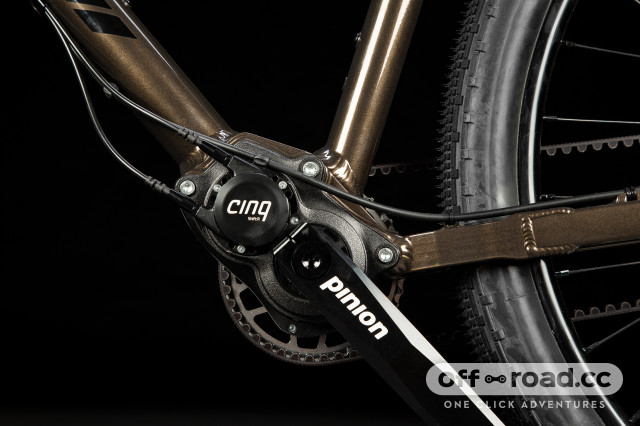 The PINION system is integrated into the frame, ensuring a low and central centre of gravity to retain the bike's positive handling. The big benefit of using such a drive system is that it's all sealed and protected from the elements, promising minimal maintenance.

Instead of the chain drive, you'll find on almost every bike on the market, Nicolai has opted for a GATES Carbon Drive on the Argon GX Pinion. It's a reinforced carbon belt that's said to transfer power efficiently and quietly without stretching or any chain slap. The belt uses a Centretrack guide along the belt ribs and teeth that prevent the belt from jumping ship. 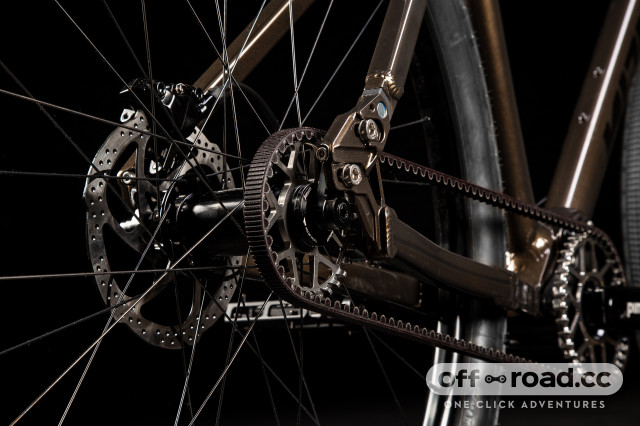 Unlike chains, the GATES Carbon Drive requires absolutely no lubrication. All it'll need post-ride is a rinse to get rid of any dirt. 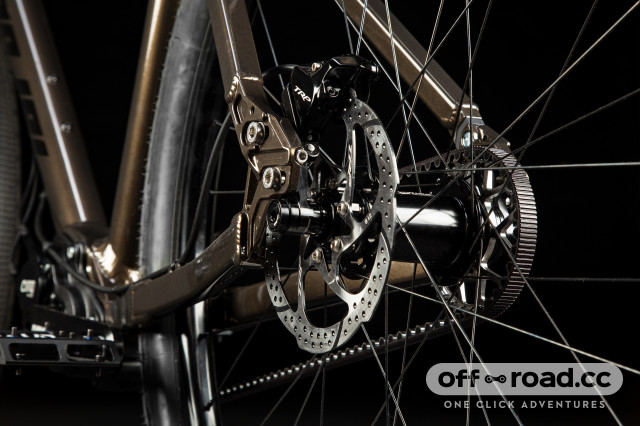 As part of a belt drive system, it's tensioned using sliding dropouts. Nicolai has been clever though, as the brand has built the Argon GX Pinion with a 140 flat mount disc brake that's integrated into the left side of the dropout. With this, you won't have to adjust the calliper when adjusting the dropout.

Moving onto the bike's geometry, it's designed to combine sportiness and efficiency, with controlled and safe handling across a wide range of terrains. The brand is pretty quiet with the exact figures but they promise a long top tube and reach combined with a slack head angle and long chainstay for a stable, efficient and smooth ride.

Nicolai has applied adaptive geometry to this bike, which accounts for the different sizes and weights of different people. For example, as the bike gets longer, the seat angle becomes slacker and the head angled becomes steeper on larger frames. This is to promise a similar ride throughout the range of sizes of which there are six to pick from. 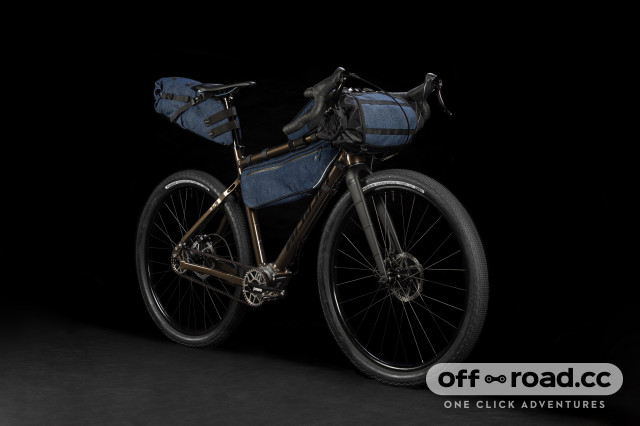 It'll be rude to forget that this bike is ridden with pack mounts and bosses, so it's primed to get fully laden with all of the bike packing kit you can muster.

Another neat feature that the frame carries is external cable routing for easy serviceability.

With the new Argon GX Pinion, Nicolai offers a range of customisation options so you can tailor the bike to your own needs. You can pick from two different wheel sizes, a bunch of tyre options, flat or drop handlebars and you can even kit it with a dropper post.

That rear triangle is pretty agricultural!
That said, it would make a good basis for a commuter or tourer, with no cassette or chain to wear out, ever. How durable are the gearboxes?

I love the frame, not the welds.  Dunno, feels a bit like putting a F1 engine in a Rover, pricewise too.  You get a bit more range -whether useful is another matter- but where's the edge over a Rohloff?

I'd love to see a test review. Also, the manufacturer claims weight "from" 9.8kg, but are coy about what that means in practice.

The Argon GX Pinion's 7020-T6 aircraft-grade aluminium frame is designed to be torsionally stiff with the aim of transferring pedal power directly into forward propulsion.

I love the frame - particularly the rear triangle.  A Pace RC200 reborn!   Love the idea of a pinion and gates belt but not convinced the benefits are worth the weight trade off.  I dont get where its meant to sit in the market compared to normal gearing or a Rohloff, both of which are more proven on the ultra distance circuit.

I'd love to see a test review. Also, the manufacturer claims weight "from" 9.8kg, but are coy about what that means in practice.