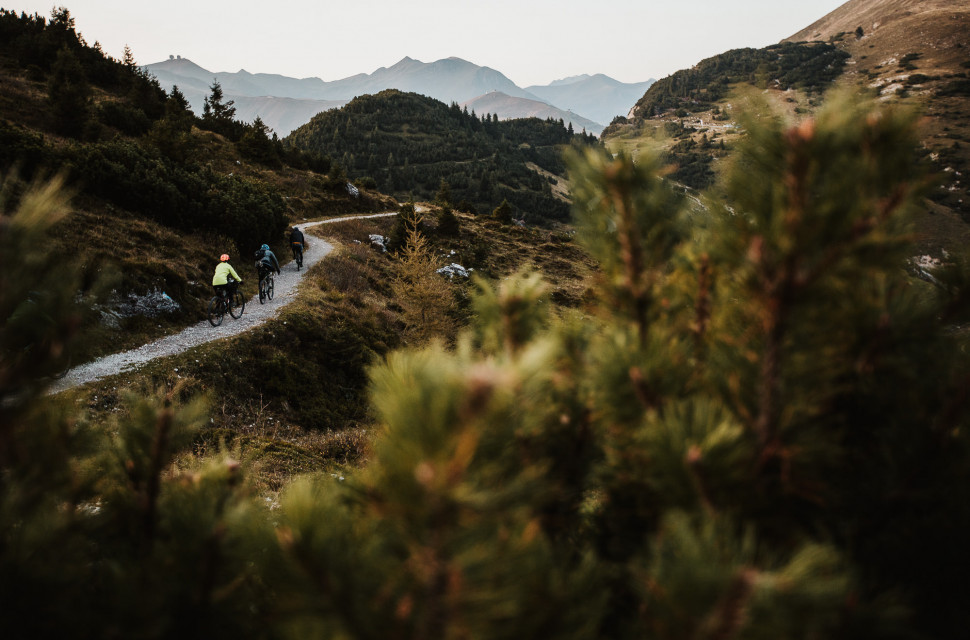 Gravel has hit the mainstream. There are events appearing all over the place. I’ve done a few in the UK but keen to expand my horizons. So when I received an invite to ride the Jeroboam 300 gravel race in Italy, I hit reply and hastily typed “count me in!”

As I would find out, the Jeroboam isn’t your typical gravel event. Now in its third year, the event serves up a savagely tough route through the mountains and vineyards of the Lombardy region of northwest Italy, a short drive from the hustle and bustle of Milan.

If you’re expecting miles of gravel tracks, you’ll be disappointed. Instead, the Italian event serves up a huge plethora of terrain and surfaces, from big alpine road climbs to cobbled paths, old roman roads, mountain bike trails, sweet singletrack and gravelly double track through acres of vineyards. This is about as opposite to the US idea of gravel events as you can get.

The event offers a choice of routes all starting on Saturday morning: 75, 150 and a fearsome 300km. They’re not distances plucked at random, instead they match the size of sparkling wine bottles the region is famous for. A Jeroboam is a massive 3-litre bottle, a Magnum is 1.5 litres for the 150km, and a standard bottle is 750ml, matching the 75km. 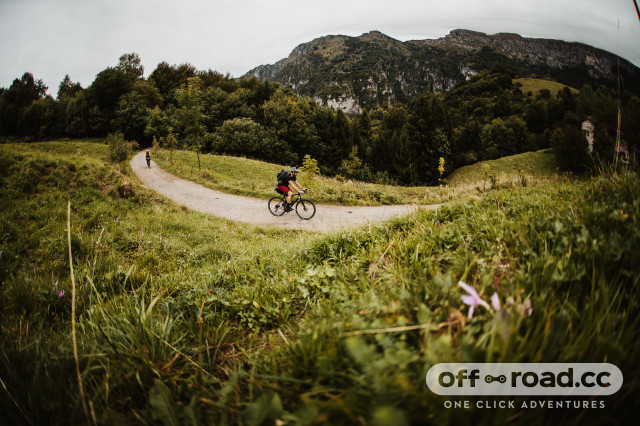 I opted for the middle distance, blaming a lack of current fitness and an early flight the following morning which I was worried about missing once I learned the fastest time in 2018 was a staggering 23 hours! I was reassured that despite the lack of distance, the 150km ride would give me all the flavour of the area without the suffering. Well, less suffering anyway. That sounded good to me. 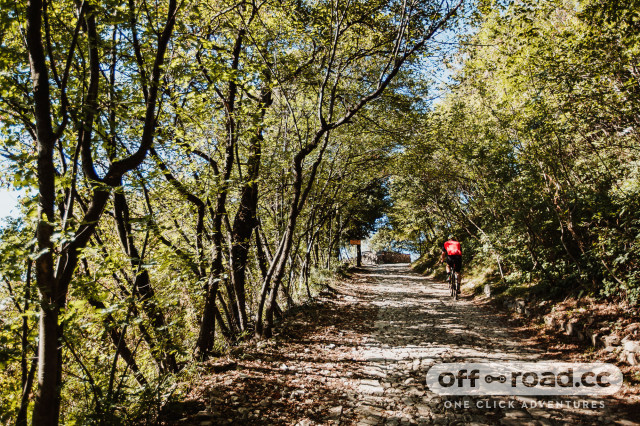 I really had no idea what to expect when I rolled out of host village Erbusco on Saturday morning. I’ve done a few gravel events, and I regularly ride gravel bikes around the byways and woodlands of the Cotswolds. None of that prepared me for what lay ahead.

And how do you prepare for the unknown? Carry a ton of food and spares, that’s how. Preparation amongst the riders setting off beside me varied from minimalist to the veritable kitchen sink of every conceivable bike packing product. I opted for an approach somewhere between the two extremes: a handlebar bag full of snacks and tools and spares stuffed into a small saddle pack. The weather forecast was good, but I packed a waterproof just in case. I was hopeful, despite fearing I’d be on the bike most of the day, of getting back before sundown, so I didn’t take lights.

Without a GPS computer, it would have been impossible to navigate the route. No arrows or Marshalls signposted the route, so navigating via the supplied GPX track on a computer or phone was essential. So it was with some alarm that I briefly rode with an Italian rider who had no computer or way of navigating at all. I found it tricky enough, due to a cornucopia of small tracks often making it tricky. I would soon realise that if there was a steeper and harder option, it was invariably that way.

By the time I had crested the top of the first of the day’s big climbs, I had clocked up 1,200m of climbing in just 30km. That’s a bonkers ratio of climbing to distance and hard, nay impossible, to replicate on my local trails. I now had a better idea of what the Jeroboam was all about: maximum suffering and never taking the easy option when there’s a harder, steeper, rougher track to the summit. 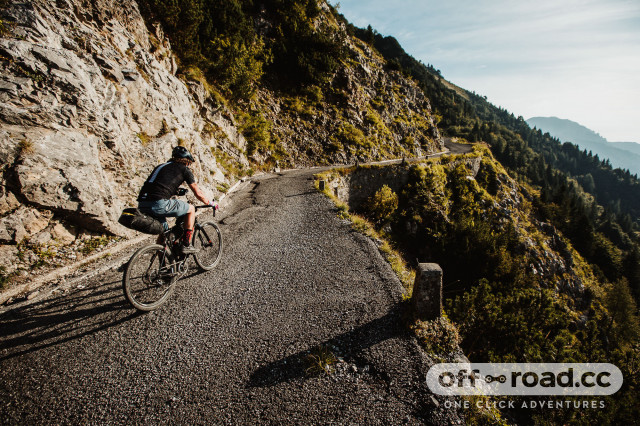 Thankfully I had done some last-minute preparation. From studying the route profile I had gleaned the important detail that nearly all the climbing, about 3,300m, would come in the first half of the route. It was seriously weighted towards a very extreme beginning and a relatively gentle second half. With so much climbing packed into such a short distance, it meant the gradients were severe, up to 30% in places. It was unquestionably hard going. Many times I wanted to get off and walk, but stubbornness kept me pushing the gears.

I was thankful for the massive 50t sprocket on my cassette. I had been loaned a brand new 3T Exploro for the event and it was equipped with the latest SRAM wireless goodies, including an Eagle AXS rear mech and 10-50t cassette, joined to a Force 44t chainset and brake levers. Any time the road or trail headed for the sky, I was straight into the 50t and spinning my little legs away.

Going down, the 12-speed cassette with its diddy 10t sprocket gave ample top-end range for the brief occasions. Gaps between the gears was a smooth progression, I really can’t fault it. It’s true that 1x drivetrains have divided opinion but SRAM’s 12-speed offering really makes it much more usable over such varied terrain. 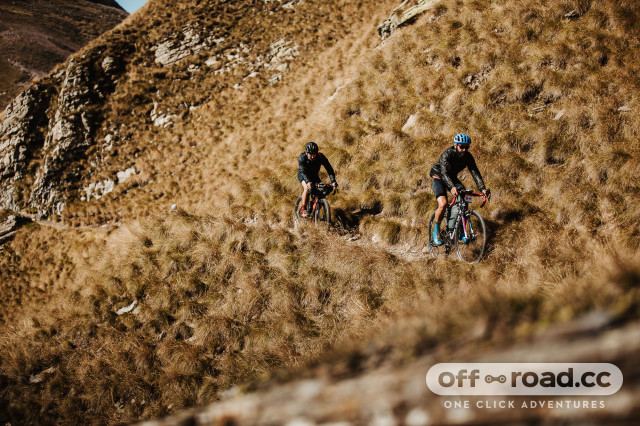 The route comprised three big climbs. They were all on the road, some main roads, others forgotten or closed roads that had fallen into disrepair, only used by local farmers, who all seem to drive Fiat Panda 4x4s. And when the road ran out, the organisers had managed to find some really rough cobbled and gravel tracks. One early road climb of a ridiculous gradient transitioned to a road resembling the Arenberg pave from Paris-Roubaix, but at 15%. It was brutal and hard going, a test of strength and perseverance.

Largely roads for going up then, but a heady mix of cobbled paths, narrow goat tracks, forest singletrack, gravel double tracks and rocky terrain was the order of the day for any part of the route traversing or descending. Some of the off-road tracks were a riot of good fun, especially on a drop-bar bike. Admittedly a mountain bike would have been more fun many a time, but it’s a reminder of how capable bikes such as the Exploro are. 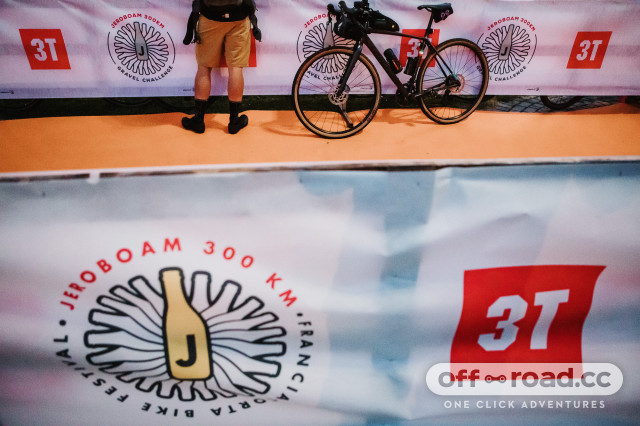 Bouncing from corner to corner, trying to pick a clean line through the rocky outcrops to avoid the risk of a flat tyre. Jiggling down old roman roads. Hopping over roots. Scaring myself silly on a warp-speed narrow track through dark woods. Arm pump on a horrendously rough old concrete road descent that I never want to see again in my life. The off-road trails were hugely varied and huge fun. It all just about made the climbing worth it.

What’s in a name?

It really wasn’t your usual gravel terrain though. To call the Jeroboam a gravel race would not be accurate all. Even the organisers are trying to get away from it, but gravel is a name that has quickly stuck with people most coming to understand what sort of bike and riding it represents.

Which got me thinking (I had a lot of thinking time on this ride, having been dropped by the faster four finishers very early on). Given the mixed terrain nature of the route, a better name could be one that was used to describe what since became mountain biking: all-terrain bicycles, or ATB for short.

Mountain biking, always a sport obsessed with image and wanting to appear cool, quickly adopted mountain bike and ATB faded into the history books. But I think it could be resurrected for events like the Jeroboam that have a mix of road, gravel, dirt and other terrains. Anyway, it’s just an idea, let me know what you think in the comments section. 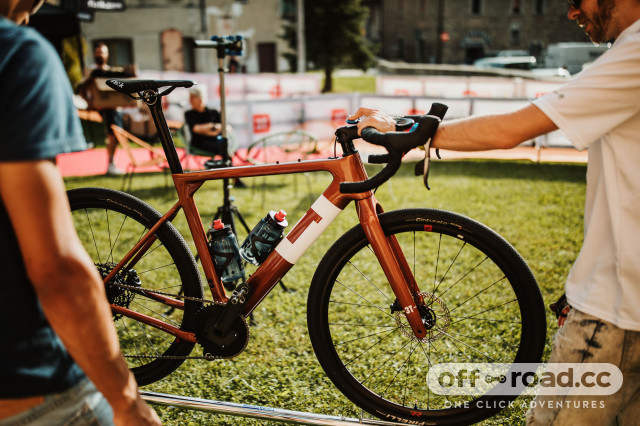 As a test of a bike like the 3T Exploro, it was perfect. A road bike would have been faster on the road climbs, but fragile on the off-road paths. A mountain bike would have been faster and more fun on the technical trails, but slower on the road. A gravel bike was the perfect compromise, not perfect anywhere but capable everywhere. And by gum, the Exploro is a rapid bike!

The only thing I’d change, other than perhaps a smaller chainring, is to upsize the tyres. The descents were rough and tough and more cushioning from the jolting and arm pump would have been appreciated. I 50mm tyre, even a mountain bike 2.1 or 2.2in tyre would have been just lovely.

By the final big climb of the day, I was realising the 150km route was taking a long time to complete. My average speed far lower than I’m used to on a gravel bike. The temperature was up to the low 20s and with just three feed-stops dotted along the route, drinking adequate water was becoming an issue. Fortunately, I discovered getting free water bottle refills is relatively easy in Italy, with water fountains in most parks and villages. 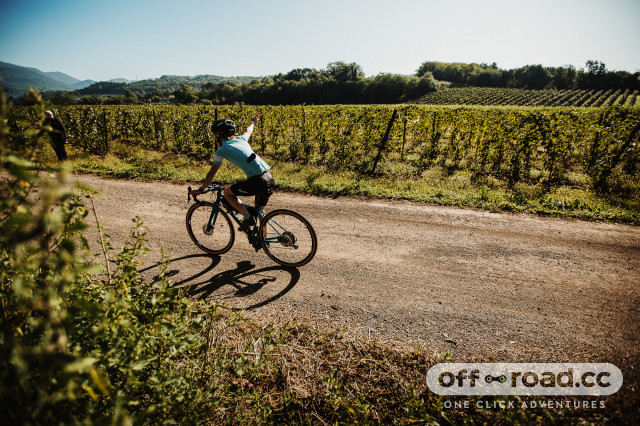 The landscape of this region was a nice distraction from the steadily building fatigue. It really is beautiful here, and the route picked some good spots to visit. But while the 150km route tackled some big climbs, none really nudged above the tree line. We spent a lot of time riding through forests and woodlands. It’s clear from the photos that the 300km Jeroboam route, which heads close to Lake Garda and goes over some even bigger mountains, is more spectacular in scope than the shorter distance, which while tough doesn’t quite serve up the same thrilling spectacle.

After 9 hours (8 hrs 15 mins ride time; I had to stop for photos and snacks) I rolled across the finish line. I was happy to finish, the suffering of the early climbs a distant memory now. My strategy of constant eating had paid off, I staved off fatigue and cramp, and had maintained a good pace and energy level throughout the ride. 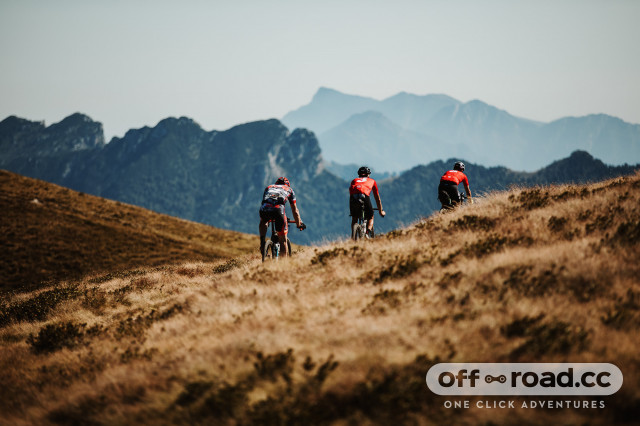 The 150km route was tough for sure, and the landscape varied and stunning to look at. But sitting at my desk several days after the event and looking through the photos, it’s clear the 300km route, while not only longer and with double the climbing, really treats those brave enough to tackle it to properly breathtaking views over remote mountain summits and Italy’s largest lake, Lake Garda.

The 150km route was good, but it didn’t feel as special or rewarding as the 300km.  The 300km route is clearly a huge undertaking, with the fastest finishers needing 21 hours to complete it, and many opting to kip through the night and make it a two-day challenge.

The Jeroboam has expanded to a series and now also heads to Girona, Czech Republic and Spain. Find out more at jeroboam.bike