Skip to main content
Log In Register
The season begins - but with with a bang or a whimper? 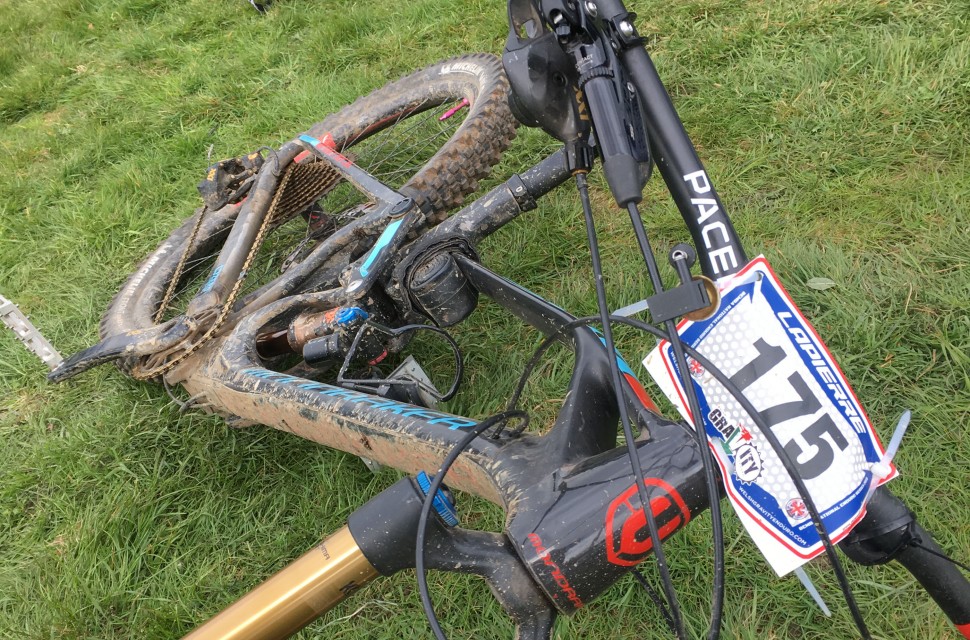 No matter how innately competitive (or not) you might be, there's always a part of you that wonders just how fast you could be on a bike if you put your mind to it. Follow our Jon as he tries to take it seriously for once with a season of enduro racing. In part three, it's race day...

If you want to make yourself feel bad about every missed training session in the run-up to a race, there are few better ways than getting overtaken on the first stage of the first race of the season. If trying to breathe out of every orifice and still not finding the air you wanted isn't enough to give you the hint, it's a very good way to let you know you may still have some work to do on the training front, what with the 20-second gap between each rider.

Such was my introduction to round one of the British National Enduro Series at Afan Argoed and - excuses ahoy - I hadn't really got off to a prime start, having totally missed practise the day before and riding all but two of the stages blind. The other two I'd been advised to walk the night before by organiser Charlie as they were on the tasty side. I'd also had to hurry to the start of the first stage because my dropper post had decided it didn't want to play and I'd had to change it that morning, which delayed things a touch. Go internal cable routing!

On the plus side, at least conditions were pretty damn good, with the five stages suffering from an excess of dust and dryness in practice (I was told) if anything, though it seemed to have dampened down a touch come race day.

The first stage was an absolute pedal-fest, using the Blade descent an involving a bit of a windy schlepp across from the race base at Afan bike park nee Bryn Betws Lodges. I'd been seeded in a rather tasty position with the fast boys of the usually really bloody competitive Masters group, I assume due to my last couple of race results having not been too shabby. It turns out that the National series doesn't attract that many day trippers, so it shouldn't have been that surprising that I got my arse handed to me, as previously mentioned.

That said, it wasn't a very easy stage for anyone, with most crossing the finish line looking pretty shot; 4-5 minutes of flat out pedalling on a rough trail centre descent will do that to someone.

Any dreams of 'a result' having been quickly kicked to the curb, it was on to stage two, which featured another quite sprinty trail centre top section followed by a lot of steep, switchback-ey corners that had been looking like prime candidates for having the exits blown out completely when I'd walked the dog up them the previous evening. In a much needed ego boost, it was my turn to catch the rider in front on this stage, happily being able to overtake on a flat sprint section before the steep stuff started.

I'll happily admit that hammering it down natural trails that don't need much pedalling is much more my scene than pedalling and trying to keep the sick down as my heart rate redlines, so after feeling rather glum at the end of stage one, I was all on a high, especially as I'd managed to not make too many mistakes and hit the lines I'd wanted to, having deliberately tried to rein it in a bit as running wide and overshooting a corner would have been a tape tangling, bike retrieving game-over situation.

The third stage used a bit of the bike park and I was once again reminded that I had work to do on the pedalling front, while missing a few high lines cost valuable seconds on a relatively short stage, though passing by the arena on the way out meant a quick snack before the steep and techy, almost all-natural fourth stage, which I'd been both looking forward to (it's steep!) and dreading (it's steep!).

Happily, the field had begun to thin out a little, so there was now little danger of either being caught or catching someone, so I did my best to hit the lines I'd spotted while walking it the night before and did surprisingly well at remembering a few, though I only clocked the big, time-saving high line on the open section as I shot past it in a flutter of heavy braking.

Racing is always good for pushing you to ride a bit faster than you'd normally be comfortable with and as the track opened out into a very fast but loose rocky section, I tried to focus on remembering to breathe - I'm pretty sure I held my breath through the sequence of mega tight and steep switchbacks up top because I was concentrating so hard - and not thing about what happens when you fall off your bike at pace.

Minor line failure aside, I made it to the bottom cleanly and felt pretty pleased with my performance in the grand scheme of things, having tried to go as fast as I could while still staying smooth and rubber side down. Knowing there was only one more stage was also a little morale boost, which made the climb right back up the top of the hill much easier.

The final stage of the day was a fairly pedally top section split up by some small tech plummets, another couple of pedally sections with bus stops to break them up before another sprint into a nicely loamy singletrack and then out into the arena. By this point, my legs were feeling a bit sad and catching a pedal as I entered one of the techy bits managed to kill some hard-won momentum.

However, seeing the person behind me hove into view as I entered the final sprint did perk me up a little. Noone wants to get overtaken as they come into the finish arena and I dug deep to prevent that from happening, though it was a fairly close run thing.

All in all, it was a bloody hard event, mostly from a physical fitness point of view. I felt in good condition felt strong on the tech stuff, but my legs just weren't there when it came to putting down sustained power on sprints and I suffered accordingly.

When the scores were in, I came 49th out of 106 in the Masters category which, looking on the bright side, is solidly mid-pack though I'd really fancied myself as top third. I suspect that's a bit optimistic, but it'd be nice to get closer than 25% to the fastest time of the day and 18% from the Masters winner. It's rather telling that on the steeper stages, I did relatively better, coming 28th in my category on the steep stage four compared to rather shabby 68th on that pedally first stage.

It's been powerful motivation to get back in the gym either way, with Ben at The Strength Factory now supplying me with his Complete MTB Programme for training going forwards. I've also finally dusted off the turbo trainer, so I'm thinking of mixing that up with some more interval-based suffering which I hope will give me the legs I so badly need.

Still, this weekend's steep tech fest in Graythwaite for round 2 should suit my current form a little better - assuming I can stay on the bike, that is...