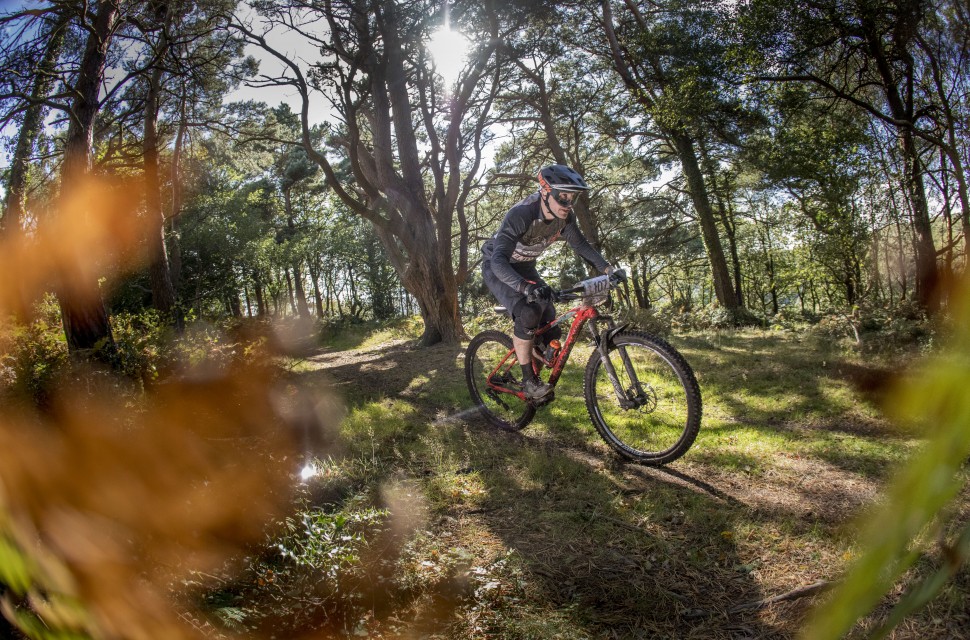 No matter how innately competitive (or not) you might be, there's always a part of you that wonders just how fast you could be on a bike if you put your mind to it. With the middle portion of my third decade arriving, I decided to try and take it seriously for once with a season of enduro racing  - and some proper training to help me get there.

I will freely admit that I've never been much of one for training. Sitting on a turbo trainer and using Zwift is about my limit to stop me being an absolutely unfit biffer over the winter months, but I'd much rather head down the woods and mess about than go to a gym. My racing career has followed a similarly haphazard suit, with the odd race here and there followed by minor soul searching over whether I could do better than the mid-pack results that follow.

So, with a minor (hopefully early) mid-life-crisis on the way, I decided I'd actually try to try for once, trying to get in as many British Enduro Series races and other enduro events as I could in 2019 - the EX Enduro being another grudge match I needed to settle. However, if I was going to do that, I'd be needing some help as, despite what you might think of a mountain bike journo, and merely riding a few times a week wasn't really helping to progress my fitness in any noticeable way - it certainly hasn't over the last few years at any rate.

Luckily, Ben Plenge of MTB Strength Factory was on hand to help. Ben has trained athletes from the world of motocross and downhill and, with a number of high-level enduro riders on his training roster to boot, knows what it takes to create a racehorse - or in my case, at least something like a fast donkey.

As the name suggests, Ben focuses on strength and conditioning. I've often thought that to be fast on a bike, you just need to do lots of miles (quickly) on a bike, but this is in reality a pretty ineffective way to get fitter. First up, you need loads of time - and I tend to lack that - and secondly, it doesn't really address the fact that having piston-like legs and mighty lungs might make you faster up a hill, but it won't help much when you going down and certainly doesn't do anything to prevent injury - quite the opposite in fact.

There's also now a lot of evidence to say that short, hard efforts - anaerobic exercise - is actually better for your overall fitness than doing longer amounts of aerobic exercise. Weight training, as you'll know if you've tried it, very much falls into the former camp, so it stands to reason that putting it into the mix alongside usual bike riding activities makes a lot of sense, especially as it pays serious dividends when it comes to being able to wrestle your bike down a hill. Having all your muscle groups strong and well balanced also helps prevent injuries, both chronic and otherwise.

Finding out your weaknesses

After a chat on the phone, I popped down to see Ben for an assessment. That basically involved finding out priorities for training as well as him judging just how weak and inflexible I was, which was enlightening in itself. It turns out that never stretching isn't all that amazing for your body when it comes to mobility, while solely riding a bike as your exercise does a pretty good job of creating unbalanced muscle groups, which once again isn't so good for your body and pain-free riding.

Some sweating and quite a lot of disco legged shaking in various stress positions later, Ben had taken a lot of notes and was ready to formulate a plan, including priorities for improving mobility in key areas. As an example of how fine a detail this goes down to, Ben knew I've always been a flat pedal rider when it comes to mountain bikes, so improving ankle flexibility and calf strength was going to be important to allow me to keep in a good riding position when on the bike.

As well as face-to-face training based in Bristol, Ben also offers a number of online mountain bike training programmes that allow you to get all the benefits of structured training if you can't go and see him in person, with a monthly subscription cost for a monitored programme or a one-off cost for access to a pre-planned programme of bodyweight, mobility or kettlebell exercises.

I'd be following his Complete MTB Programme, which at £32 a month is very much like Netflix, except it aims to make you faster and stronger on the bike, rather than the exact opposite. The programme consists of a training plan which is laid out and then monitored by Ben via the Training Peaks online app. It also gives you access to Ben's library of instructional videos, which cover everything from the correct way to perform an exercise to the correct 'attack' position - which Ben prefers to call the Flow Position - for riding your bike, plus different mobility exercises and warmups. It also includes a mobility self-assessment video, so you're covered there if you can't go and see Ben in person to find out how wrecked your body is.

I'd be starting with the Foundations Month programme, which basically aims to get you in a good position for what is to come, with two different sessions of strength training per week preceded by some mobility work to help in key areas, plus some other fun additions to help me along, like six minutes of planking per day. It also prescribes some aerobic riding, recovery days while mine gave me the weekend free to get out and ride normally - though under strict instructions to keep it aerobic.

So, armed with a plan and all I need to know about how to suffer in the service of getting fitter and faster, it's time to get the ball rolling. I'll be posting fornightly updates, so keep posted.

If you're keen to find out more about Ben's training, check out his site below for more info.