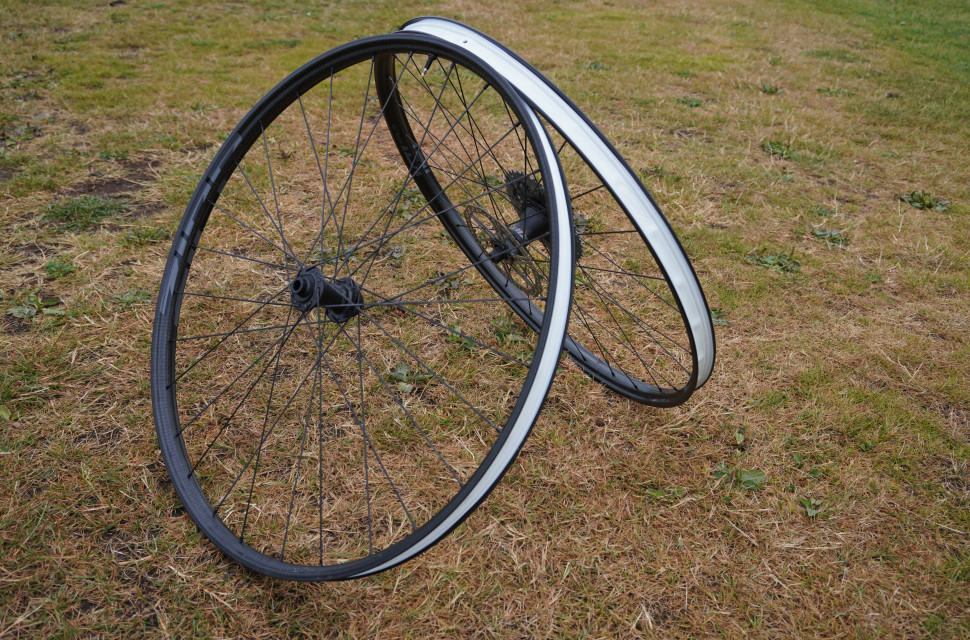 Matthew Page
|
Sep 22 2022
|
Overall
Quality
Performance
Value
What's good?
What's not?
Buy if...
you want to splurge on a performance gravel wheelset and are not interested in weight or aero gains

The Zipp 101 XPLR is the brand's first attempt at the best gravel wheelset concept. What sets it apart is a single-wall carbon rim with a form that has been carried over from the Zipp 3ZERO MOTO mountain bike range. The 101 XPLR carries a premium price tag and they're a touch weighty. Along with a few other issues these wheels won't suit everyone.

If you are already familiar with the previous  Zipp 101 wheelset from about a decade ago, the wheels pictured here are dramatically different to those low-profile “budget” alloy rim wheelsets. The new 101 XPLR wheelset features a full carbon rim, aimed directly at gravel riding with some bold claims. While other brands' premium offerings boast claims of lightweight and stiffness, Zipp has taken a different approach and states the 101 XPLR will give you a magic carpet ride and increased durability. 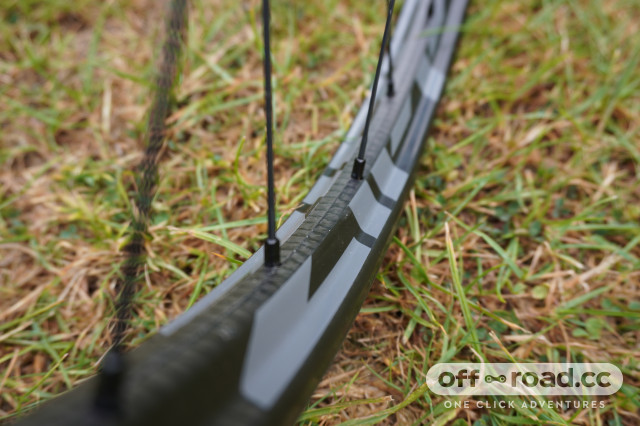 The key element to the 101 XPLR wheelset is the rim, which is a single-wall carbon construction and similar to what you would find on a motorbike, with the raised central section.

Zipp claims that the shape of the rim allows it to “pivot from either side of the spoke bed”, or in other words, flex. The ability to flex or pivot will allow for a smoother ride and less fatigue on the rider. It should be pointed out that the flex is not the entire wheel moving side-to-side, but rather that the rim can move independently.

Increasingly, gravel riding is becoming more focused on racing and aerodynamically shaped rims. The Zipp 101s with their shallow depth will offer no aerodynamic performance benefit. 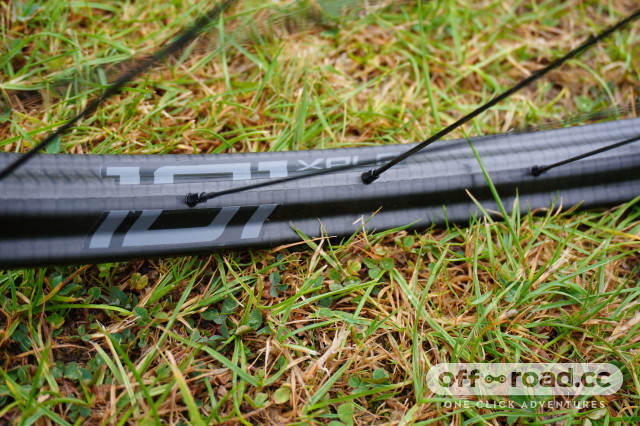 It might not be possible to put a number on comfort, but one number that does stand out with the 101 XPLR is the internal rim measurement: 27mm. This pushes it beyond most other brands' wide wheelsets, where 24 or 25mm is often seen as wide and anything beyond that is usually reserved for mountain bikes.

This is not the first time Zipp has pushed the envelope, as the 303 Firecrest, aimed at both road and gravel, had a 25mm internal, hookless rim profile.

The benefit of a wider internal rim is increased support for wider tyres. By giving a less rounded profile, the width, in theory, keeps more of the tyre in contact with the surface through the corners. Modern wheels aimed at mountain bikes will often be at least 30mm, with some up to 40mm wide. 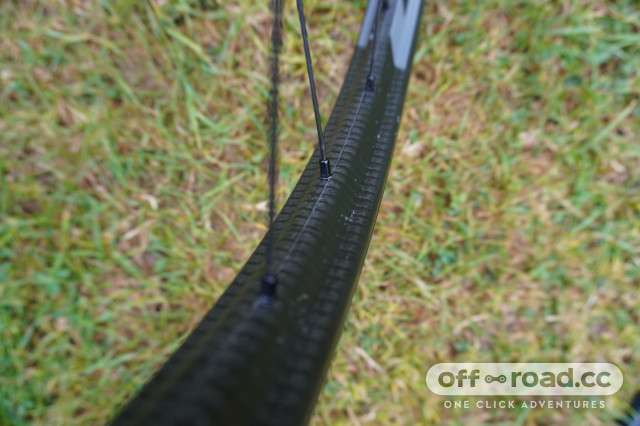 The Zipp 101 XPLR wheelset is available in 650b and 700c sizes, with a claimed weight of 1,620g although our wheels with tape and valves were considerably more, weighing 1,710g for the pair, which is split 795g front and 915g rear.

The figures are hardly industry-leading and it is perhaps unsurprising that Zipp makes no claims about the weight. Simply put, they are heavy. Ignoring bespoke builds, the lighter wheelsets that are aimed at gravel riding start from around 1,350g with examples such as e*thirteen XCX Race Gravel and the new Reynolds Blacklabel G700 Pro.

The 101 XPLRs have a total system weight limit (rider + kit) of 130kg and carry a lifetime warranty. For comparison, the lightweight 1,360g Scribe Carbon Gravel Wide++ we reviewed last year has a maximum system weight of 115kg.

Upon installation, I was not expecting any issues - but there were.

Inside the single-wall design, there is a deep drop into the centre channel, which is to allow easier tyre installation, but the spoke heads also protrude into the rim channel. This left behind a bumpy surface and made it harder for the rim tape to stick. So out of the box, the rim tape failed, resulting in sealant pouring out through the spoke holes. Despite trying several tricks, such as using an inner tube to increase pressure on the tape, I had to return the wheels to Zipp for new tape to be installed. The wheelset also had a faulty Shimano HG cassette body that wouldn't accept a cassette, and that was also replaced. 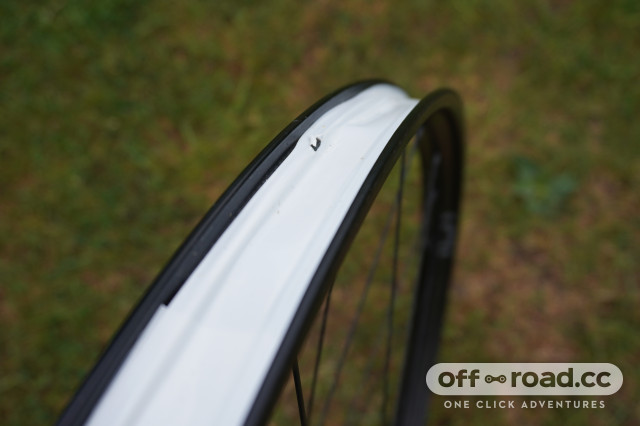 After the tubeless and freehub body issues were fixed, the tyre installation was easy. The tyre itself needed help from tyre levers to install, but inflation was simple. The bulk of the testing was carried out with Schwalbe G-One RS, in 700x45mm size and when inflated the tyre measured 45mm in width. In comparison, the same tyre measured 44mm on an e*thirteen wheelset with 23mm rim.

Despite the new rim tape, things were not perfect. Sealant still leaked through the spoke holes, although significantly less, but eventually sealed. The rim tape just didn't seem great - there were multiple air pockets, mostly caused by the raised spoke heads and the tape also suffered small rips in several locations. 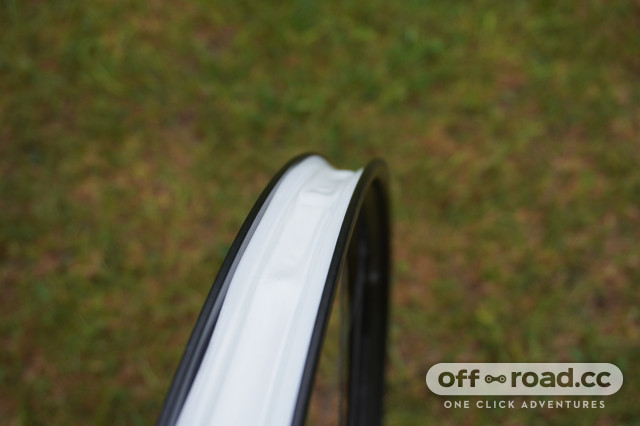 Considering they are designed to pivot, the wheels felt incredibly stable through the corners, tracking accurately even on the fastest or roughest of tracks. This was most noticeable on the front wheel which added a little extra confidence when pushing harder downhill.

The wheels seemed best suited for terrain that is more technical, and very bumpy. Some of the test rides were verging on mountain bike territory and this made me question the target market of these wheels. Mountain bike rims, fitted with suitable axle sizes, would be comparable to these.

Ride comfort is good over rougher back roads but can be improved by reducing tyre pressure or by increasing your tyre size by a few millimetres. 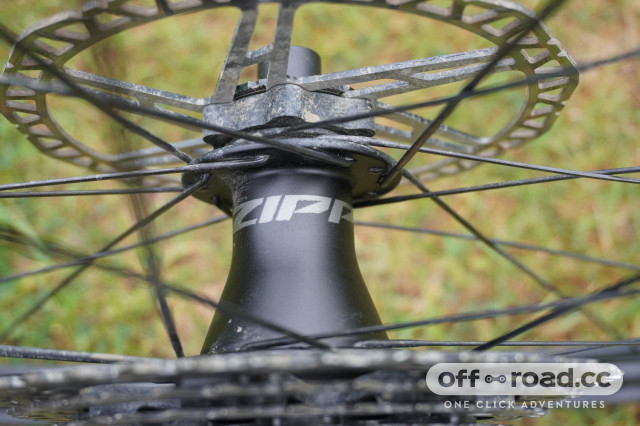 The hubs are the top-of-the-range Zipp ZR1. The rear has 66 points of engagement for quick pick-up and performed well regardless of terrain or riding. The freehub is relatively quiet too with a slight buzz but nothing too alarming.

There are 28 bladed spokes front and rear, laced in a three-cross pattern but this is achieved with no less than five different spoke lengths across both wheels. (This could pose an issue down the line as the wheels come with no spares). The disc brakes utilise the centre-lock design standard. Lockrings are included, although they have a recommended maximum rotor size of 160mm, which is limiting given the demanding trails these wheels can handle. 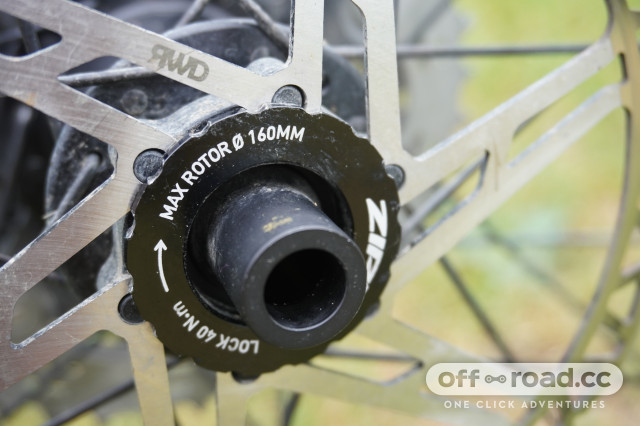 While the Zipp 101 XPLR wheels deliver some of the claims, such as comfort and handling, there are still several points where the wheels don't live up to the hype. The price is one of the biggest. At £1,746 for the pair (£823 front, £914 rear) these wheels are at the premium end of the spectrum. Other incredibly good wheels including Scribe Gravel Wide++ and VEL 30 GRL come in at almost half the price. There are some more expensive wheels, such as ENVE G23 at a whopping £3,100, built with Chris King hubs.

The issues with the rim tape were a letdown from a premium company - although it is a small part of the wheel build it should not be overlooked. At 1,620g, there are also many lighter wheelsets available.

Zipp could be credited for delivering a premium, top-end product aimed more toward the average rider - if you ignore the price - and not just racers looking for lighter and more aero wheels. But, while the single-wall carbon construction does seem to improve certain areas of performance, most gains are marginal and elements of the wheel on a basic level don't meet the expectations of a premium wheelset. The rim tape doesn't work on the profile and the freehub issues make these wheels seem like a pricey option with few if any real benefits.

Some excellent performance such as cornering, but let down in other areas

The rims should be strong, but the rim tape does not feel secure and trickier to install due to the lack of surface. It also suffered small tears during normal use.

It stayed perfectly true, and no issues with spoke tension.

Reasonably easy. Tyre levers were needed, but nothing too tough.

The rim tape is basic and doesn't work well on the rim at all. The spoke heads cause bumps to the surface and prevent a secure attachment. When the tape is on and sealed, and the tyre has been fitted they do inflate easily with just a track pump.

The centrelock security bolt is only compatible to a maximum of 160mm rotors. No spares provided.

Some benefits with precise handling and some comfort increase, but they are heavy and tubeless setup is difficult due to the basic tape.

The basic rim tape doesn't seal as well as it should, with the main issue being the raised spoke heads that make it harder for the tape to seal. They are heavy too, which might not be an issue for everyone.

Yes, but when riding generally and not focusing on performance. Less so when trying to get them working initially.

No. At the price, it is difficult to justify the minimal extra performance in certain areas over other wheelsets.

If you want a wheelset that handles beautifully, and gives noticeably less buzz from the wheel – and not interested in weight or aero, and have a big budget.

The Zipp 101 XPLR wheelset delivers some elements of performance that stand out against a more traditional rim design, but overall the benefits are marginal and other elements of the wheelset let it down. Weight and aerodynamics are not a focus for everyone, but it is still worth mentioning and these are heavy. For the high price overall performance does not match other wheelset options.