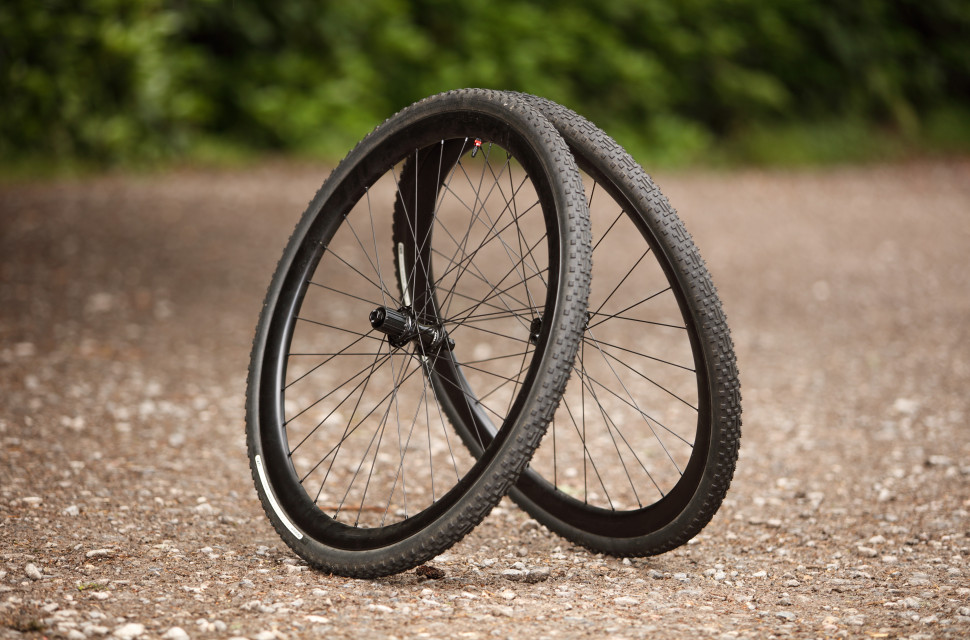 The Carbaura XCD Carbon Gravel wheelset are, according to Halo, designed for speed and strength, and they certainly showed that on my local tracks and trails. With a rim width to flatter wider tyres and a sub-grand price point there really is a lot to like here.

A couple of years back I tested the XCD’s road going sibling, the Carbaura RCD and I was mightily impressed, mostly by the solid ride feel that they exuded, and that’s something that this gravel offering shares.

Some of that comes down to the weight. Like the RCDs the XCDs aren’t the lightest in their sector (1,765g claimed/1,807g weighed including tubeless rim tape) but that does come with some benefits.

The XCDs feel planted whether you are riding fast along the flat or tackling a high-speed technical descent on the gravel. With excellent stiffness levels to boot, the whole package brought a really confident feel to the overall ride. They didn’t resonate over rough surfaces as some lightweight wheels can either, which definitely adds to that confidence.

These wheels turned up running true straight out of the box and that didn’t change throughout the test period which was six weeks or so of being put through their paces on a whole range of terrains and weather conditions. 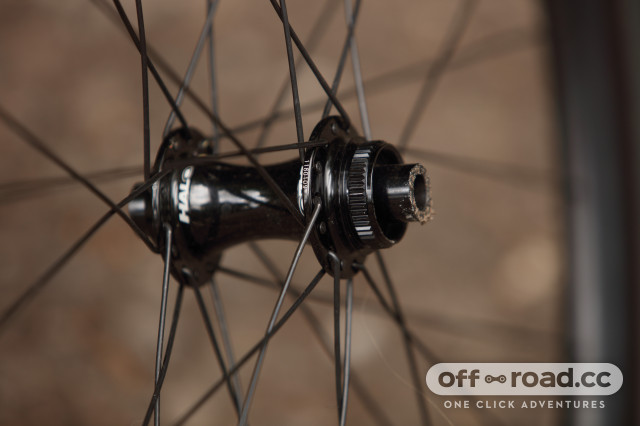 A lot of that is thanks to the build of 28 spokes for the front wheel in a 2-cross pattern, and 32 for the rear laced 3-cross the XCDs, both of which are tough and resilient enough to leave me with little trepidation about smashing the carbon fibre rims over the rockier sections of my rides.

At 35mm the XCDs are a decent depth. You don’t really need aero on the majority of gravel rides, especially here in the UK, but you do get a touch of wind-cheating here when paired up with some bulky tyres. They aren’t so deep that they become tricky to ride in exposed windy conditions though, and while I mentioned the weight, they aren’t so heavy that it really affects climbing.

In fact, they pick up speed quite quickly even from a standing start with no lag felt, helped by the quick engagement of the freehub. Overall, from a performance point of view, the Carbaura XCD wheelset has little that it can be criticised for.

So, onto the build which is carried out by hand in the UK.

For your money, you are getting 35mm deep carbon fibre rims which have an external width of 30mm, but more importantly an internal width of 26mm which makes them compatible with 28mm tyres up to 50mm. This allows you to run them as road wheels too. I fitted some 32mm slick tyres for road use and the shape of the tyre worked well with no stretching that kept the sidewalls where they should be. Their sweet spot though is for wider gravel tyres, of which I tried both 40mm and 45mm for testing.

The rim is set up tubeless ready with tape fitted out of the box. Fitting tyres was relatively straight forward with the larger gravel tyres popping onto the hooked rim with just the use of a standard track pump.

The 32mm road tyres took a little bit more pressure from my thumbs to ease the narrower width over the final section of the rim, but once fitted they inflated quickly and were secure in a few seconds. 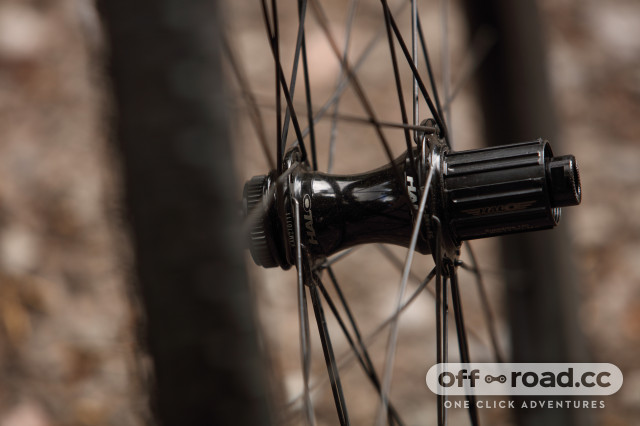 The GXC hubs are Halo’s own and are designed for gravel and off-road applications. They use sealed bearings, and I had no issues with durability when riding in the wet over gravel, mud and chalk during the test period. The rear hub uses Halo’s Supadrive system which gives 120-points of engagement which means just three degrees of movement before drive is locked in, ideal for those sudden bursts of speed. Out of the box, the XCDs accept 12mm thru-axles and centre-lock disc mounts.

When it comes to the pricing, sub-one-thousand-pounds is always a plus point for carbon wheels. At £949.96 a pair the XCDs are still a bit of an investment without being over the top. That’s twenty quid cheaper than the FFWD Tyro II wheels that are designed for road and gravel use, and that I’m currently testing for road.cc.They aren’t quite as wide rim wise which gives the Halos the edge for gravel tyre sizes, but weight is very similar. 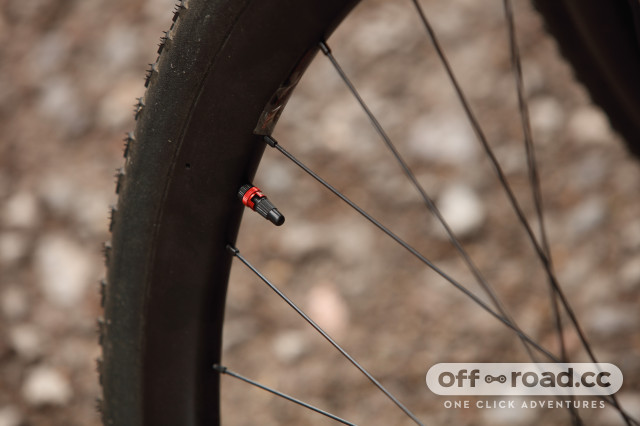 Going direct to the manufacturer can cut the price and that is highlighted by Hunt’s 35 Carbon Gravel Disc X-Wide wheelset at just £679. They are light at around 1,500g with tubeless tape fitted and come with a 25mm internal rim width. Hunt's rims are hookless though which limits you to tubeless tyres only, something worth bearing in mind if you are on the fence with regards to ditching your inner tubes.

There are lighter and cheaper wheels on the market, but don’t necessarily discount them on that. The Halo wheels are solid and dependable, plus the ride quality is great. This is the kind of set of wheels that I’d want for general gravel riding while being reliable enough for those far-flung adventures.

Halo say, "Introducing the Carbaura XCD Carbon Gravel wheelset, designed for speed and strength. Hand built in the UK. Developed to take on any long-distance gravel races, ultra-adventures, road plus or lightweight bike packing trips with ease. Designed with a 26mm internal rim width, the Carbaura XCD wheels are perfect for modern day gravel tyre sizes, making them ideal for larger volume tyres up to 50c. With a rim depth of 35mm, they are designed to offer a solid and reassuring ride, while still being compliant enough to make the ride comfortable. Enjoy mile after mile of off-road adventure. As well as featuring a wide internal rim measurement and a semi aero 35mm depth, the Carbaura XCD utilise our GXC hubs. Specially designed for gravel and off-road applications, the GXC hub features our instantaneous 120-point engagement Supadrive rear hub, centre lock brake fitment, sealed bearings and wide spaced flanges for increased stiffness and durability. We have built the Carbaura XCD with non-proprietary J-bend spokes to ensure that, even if the worst should happen, you have a great chance of being able to fix your wheel and continue with your adventure wherever you are in the world. Supplied pre-taped, these are tubeless ready straight out of the box. With the Carbaura XCD you will leave no path unridden." This is a durable gravel wheelset that works well on the road too when running wider tyres.

The wheels stayed true throughout testing after plenty of miles on the rough local gravel tracks.

Fitting a range of tyres caused no issues whatsoever.

Tubeless set up was very easy indeed with all the tyres I tried popping securely up against the rim with just a track pump.

The engagment is very quick with 120 points of engagment.

The wheels came pre-taped and valves were supplied, all worked without issue.

Not the lightest build out there, but the Halos are a solid set of wheels which are reliable and can take a lot of abuse.

Quick engagment of the freehub and easy to set up tubeless.

Not the lightest out there.

An all-round quality set of wheels that'll take plenty of gravel abuse while looking stylish, the price is good too.