Skip to main content
Log In Register
2021 Vitus Escarpe 29 CR review £2,000.00
Capable trail bike and a great base for upgrades 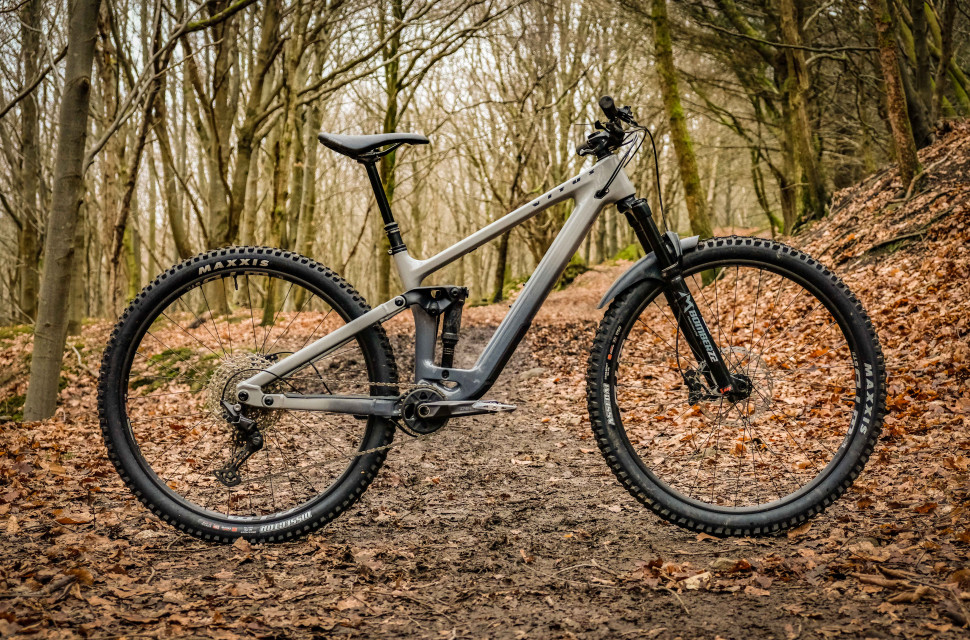 The 2021 Vitus Escarpe is a ripper of a 29er trail bike. It pedals very well and descends like a sprightly enduro bike, plus all versions have a carbon front triangles matched with cool colours for sleek looks. This base model doesn’t have the parts longevity we’d like to see, but it’s a great starting place for a bike upgrade journey. 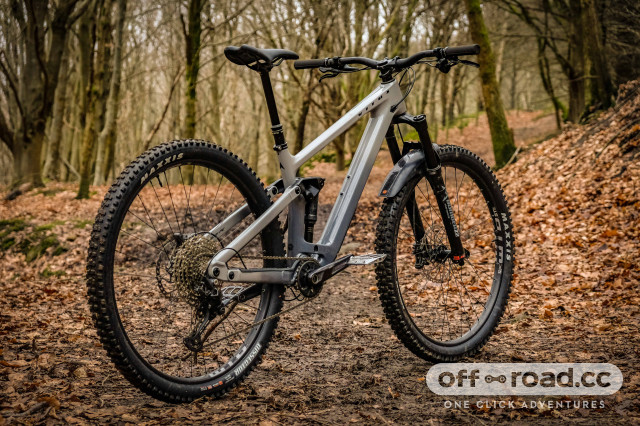 All have carbon front ends and alloy rear triangles, making for a sleek and expensive-looking frame at under two grand. I’m a fan of this grey fade too; it’s understated cool, and the bike looks low slung and purposeful. 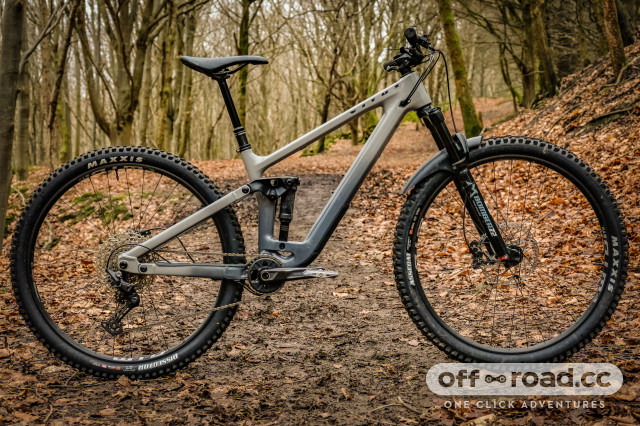 The frame gets internal cable routing throughout, but lacks internal tubes to help you route the hoses though. Nevertheless, I didn’t experience any rattling and the routing under the bottom bracket shell to the chainstay wasn’t a problem during my test time this winter. 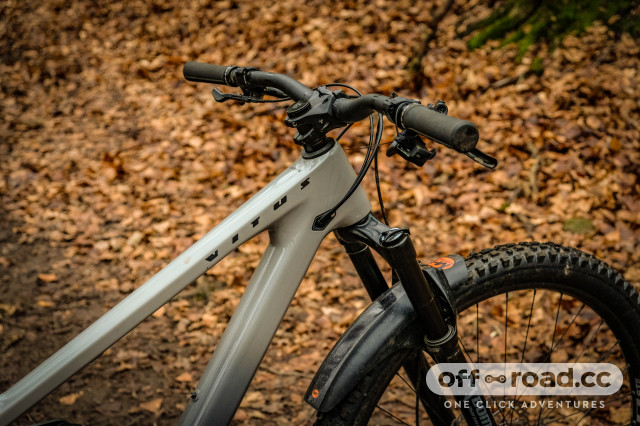 Elsewhere the frame gets a flip chip to alter geometry from ‘high’ to ‘low’ position. Changing it isn’t a straightforward as on Nukeproof or Trek bikes, for example; it's hard to line up the bolt through the frame, making insertion and extraction tricky. 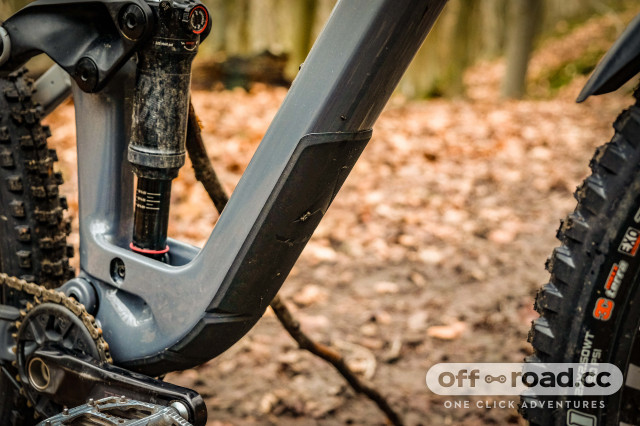 There's a maintenance-friendly threaded bottom bracket, rubber frame protection on the downtube and chainstay, and space in the frame for a large water bottle too. 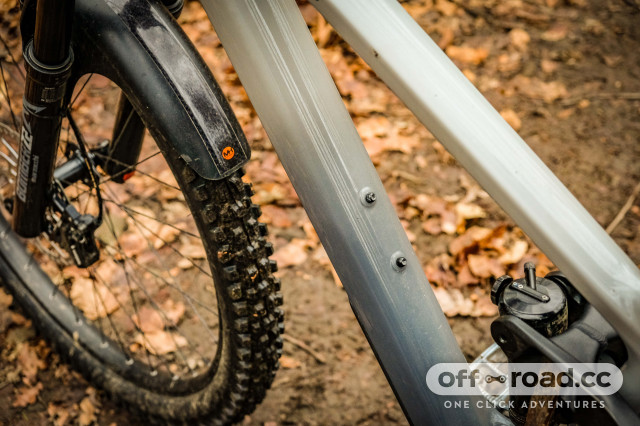 Each wheel size gets identical specifications for the same money. Our CR gets a 150mm Marzocchi Bomber Z2 fork and a Rockshox Deluxe Select R rear shock. The Bomber Z2 air has 34mm stanchions and is a simple fork that's quick to set up – there's just a rebound adjustment dial to play with.

​Marzocchi says the fork has ‘enhanced lower leg stiffness’ and it certainly feels stiffer than an equivalent Fox 34 Rhythm fork. Ours suffered from bushing play which created quite a noticeable knocking sound, and vibrations you could feel over rough ground. I have ridden this spec of fork once before on a Giant Trance 29 and didn't experience the same problem in a similar test time. 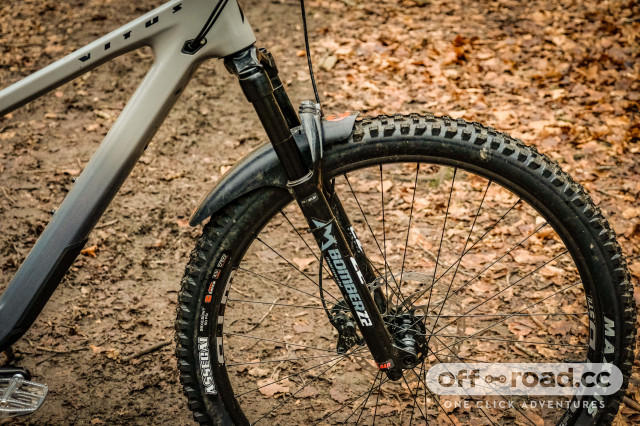 Vitus says that any affected customer would be asked to take it to a bike shop to be fixed, with Vitus refunding the cost. If it was a warranty issue – likely in this case – Vitus would also organise the return and replacement of the part. 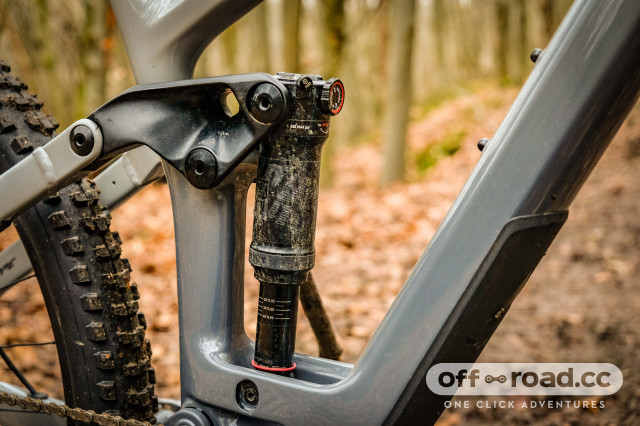 Unfortunately, it’s a similar story for the rear shock. A couple of weeks into testing saw it lose all its damping – I’m happy to say this was a genuine one off and bad luck, though, as I’ve ridden plenty of these Deluxe Select R shocks and never had this problem in the past.

The 12 speed Shimano Deore M6100 drivetrain is a smooth shifting, wide range 1x set up which is both reliable and a pleasure to use. The brakes also come from Shimano in the form of MT420/410s – the neat trick here is the use of a four-pot caliper on the front, and large rotors (203/180mm) at both ends. That makes these brakes powerful and, whilst the lever feel is slightly wooden, they stop you with no problems. 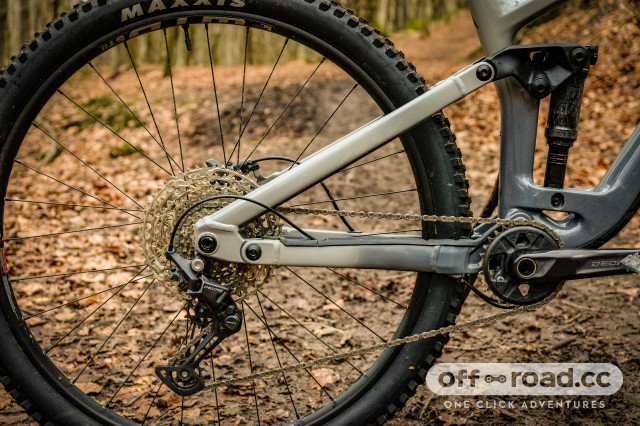 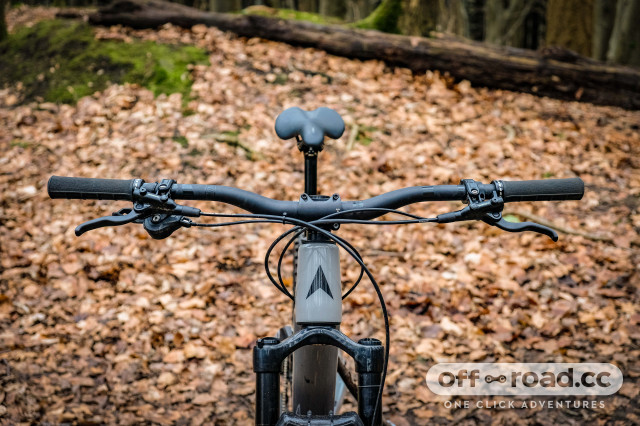 The wheels get Vitus own-brand hubs and WTB ST Light i30 rims, which are an ideal width for tyres between 2.3-2.6” wide. As always with Vitus, you get great tyres as stock; all models wear Maxxis Assegai 3C MaxxTerra EXO/TR 2.5” fronts and a Maxxis Dissector 3C MaxTerra EXO+ tyre at the rear. 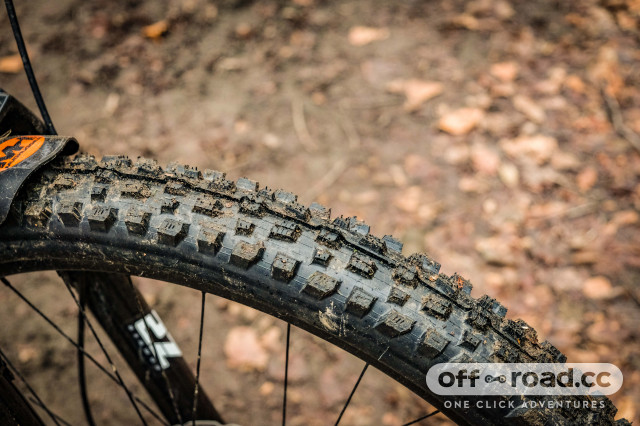 The combination of the lighter EXO tyre on the front and tougher EXO+ at the rear is a great shout for hard riding. The Assegai gives good grip in most conditions, whilst the Dissector it a good mix of fast rolling and decent braking grip – it's only out of its depth in really slick conditions. 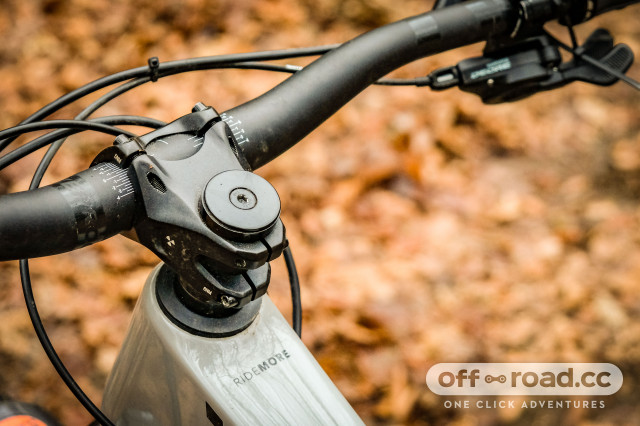 There's a short 45mm stem in the predominantly Nukeproof cockpit, with a Brand-X dropper post – 150mm on this medium frame. As you’d expect, the droppers are size specific over the range of small to XL bikes. Lastly, the bike weighs in at a little over 34lbs (15.5kg). 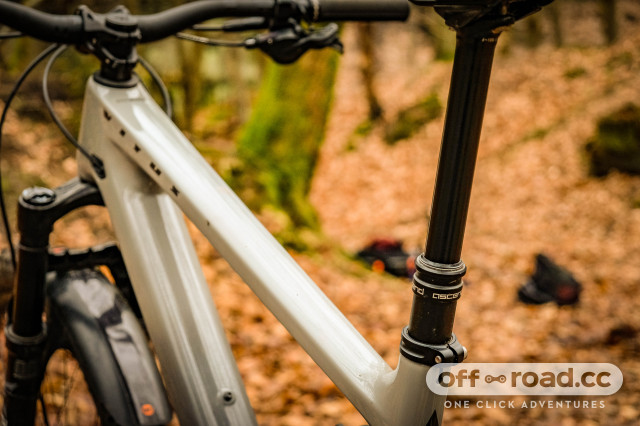 I was keen to ride this sub-2k Escarpe from its release, as with the new frame comes radically overhauled geometry. First ride and the Escape showed its hand of cards very early on, with little pedal bob and a comfy seated position for climbing.

Much like the Nukeproof Mega Alloy 290, the steep effective seat tube angle (77°) pays dividends in climbing prowess. This, coupled with a relatively long wheelbase and chainstays on the Escarpe, means it makes light work of rain-ravaged rocky climbs as well as smooth fire road spins. I’m struggling to think of a 150mm travel trail bike that climbs better for the price. 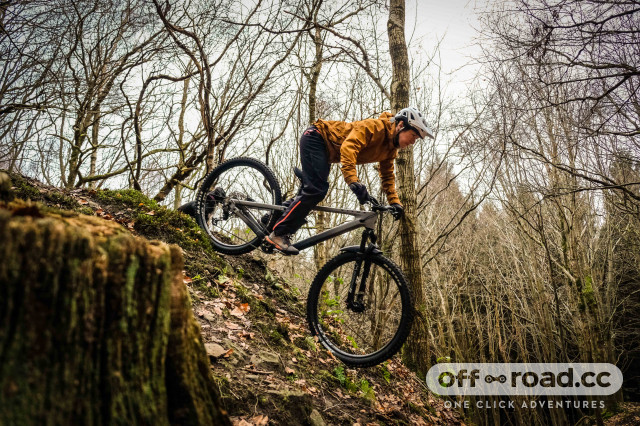 The Escarpe descends like a well-connected short travel trail bike, yet with the confidence of an enduro bike. The 140mm makes sure you feel the trail as well as see it, but not in a chattery way – rather it feels like good feedback. It's interesting and entertaining, and enhances your riding by making sure you pick smooth lines. 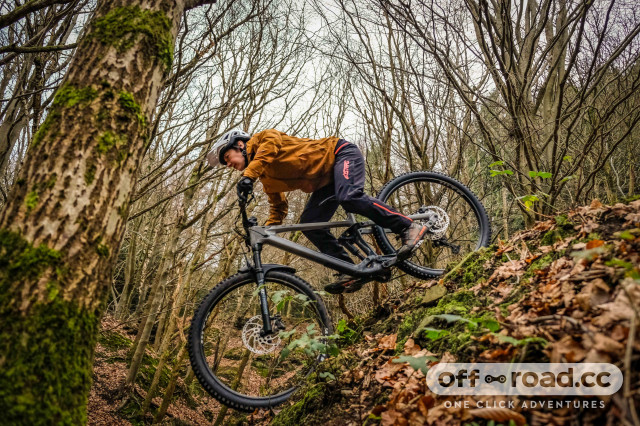 The slack geometry means it ploughs downhill with purpose. The Escarpe 29er gets a 65° head angle and, in this medium frame, a 451mm reach, 410mm seat tube, a 1218mm wheelbase and 440mm chainstays.

This particular Escarpe got a full introduction to the best on and off-piste descents near me, where it proved a balanced ride. The rear suspension deals with trail chunk well, allowing me to charge into steep stuff at a great rate, and it's stable downhill – it’s confidence inspiring to see a sub 66° head angle in a 140mm trail bike. Progressive geometry makes this a superb base to build from.

It's easy to take advantage of its sprightly nature in steep uphill pinches too. There's little I found the Escarpe wasn’t game for, in fact, from long trail centre missions to chasing long travel e-bikes over natural tech. It takes it all in its stride.

The fork issue was a shame – it was intolerable in both feel and sound, and would mean a warranty job and a break in riding for potential owners. On the upside, the Vitus Escarpe is an excellent platform for upgrades... it's more than capable of making use something like a Rock Shox Pike (in fact, you get one on the Escarpe CRS, though at £2,699.99 that's a mighty step up in price. You also get a Shimano SLX drivetrain, DT Swiss wheels and SLX brakes for that extra £700, though). 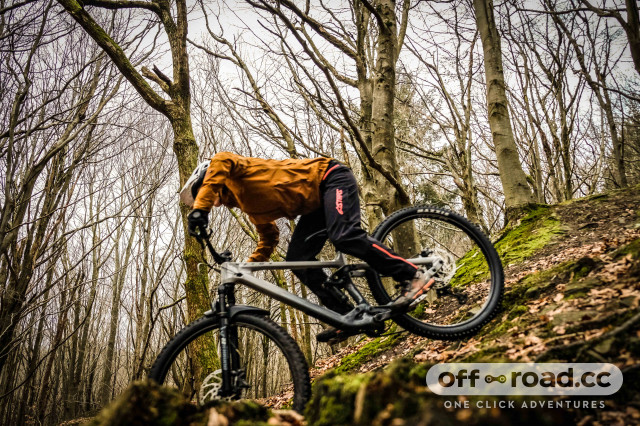 So, what else can you get for under 2k? Well, there’s the Marin Rift Zone 2, that one is £1,845 with shorter travel at 125mm and its alloy, plus its really heavy too! It is capable though and the geometry is progressive. There is also something like the Merida One-Twenty 600 on the cards but again, it’s got less travel and if you like the look of the geometry on the Escarpe you are going to be sorely disappointed with the outdated Merida. The Boardman MTR 8.9 is £1,600 and a similar spec but it’s not carbon and as per the Merida, geometry isn’t quite what it is on the Vitus. 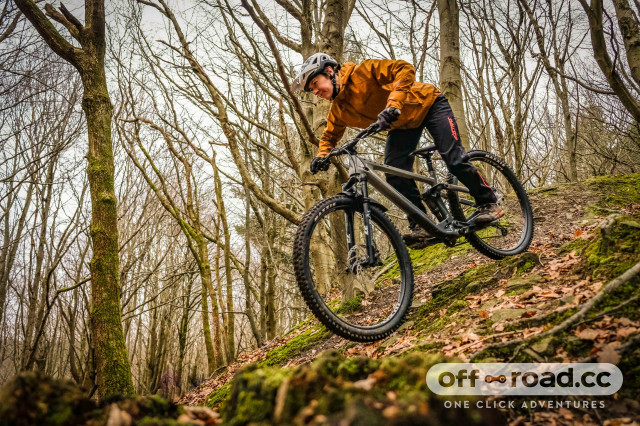 If you don’t care about buying online then YT has the Jeffsy Base, it’s an alloy frame again but you get a Yari fork, SRAM SX, Guide T brakes and DT SWISS wheels. Some of those parts aren’t as good as the parts fitted to the Escarpe but the fork is a hell of a lot better and stiffer too.

In summary, the 2021 Vitus Escarpe 29 CR is a great bike – fun, capable and versatile. The 140mm/150mm mix of suspension is plenty for pretty much anything in the UK, and even some racing if you fancy it, whilst the whole thing's still plenty capable of long days in the saddle. Ultimately, though, you'll want a fork and brake upgrade on this base model version to really push that great frame to its full potential. That makes this bike less good value than I'd expect. It is wallet friendly but spare some cash for a fork upgrade to make the most of its capabilities on the trail.