Skip to main content
Log In Register
Merida One-Twenty 600 review £2,000.00
Solid all round trail bike with good spec for the money 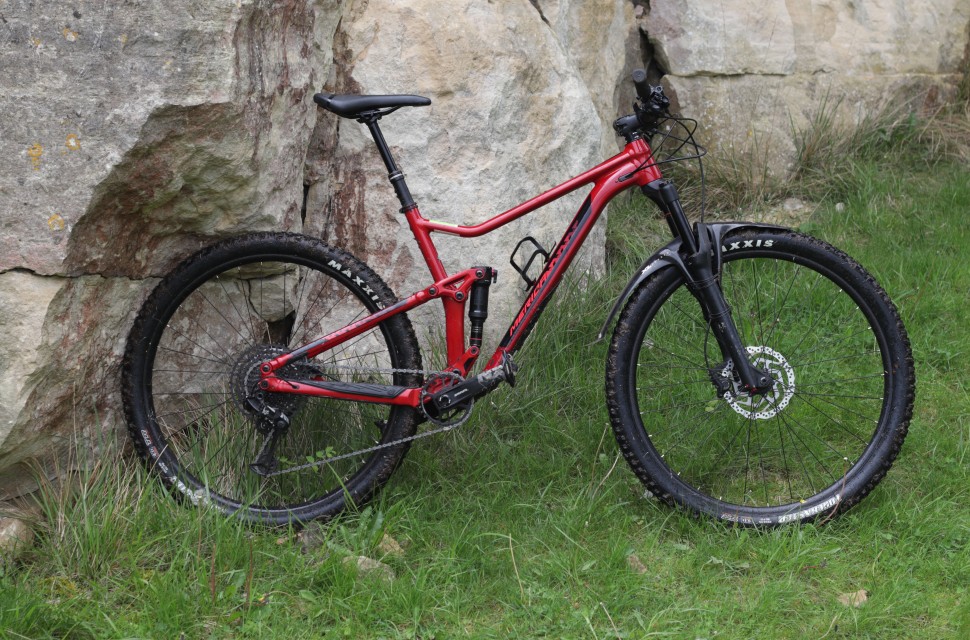 If you’ve got £2,000 to spend on a new bike and want a good all-round trail bike, you could do a lot worse than consider Merida’s One-Twenty 600. The 120mm travel 29er is a well-specced option with good geometry and suspension that combines to provide very good trail manners whether grinding up or slashing down.

Merida has been upping its game in recent years and the changes it has made across its full suspension line has been well received. But how good are those changes when applied to the company’s more affordable 120mm bike? We could have reviewed the cheapest £1,500 One-Twenty 400 but we wanted to test a model with SRAM’s latest NX Eagle groupset as it’s a key selling point, bringing as it does 12-speed to a new lower price point.

It’s a great looking frame, all made from 6066 aluminium with triple butted tubing and hydroformed curves, with a low slung top tube for good standover and a tapered head tube for extra front-end stoutness. It’s a 1x-specific frame design with full internal cable routing including for the dropper post. The downtube and chainstay are wrapped with protective material, the later minimising the noise of any chain slap that the SRAM rear mech isn’t able to eliminate. 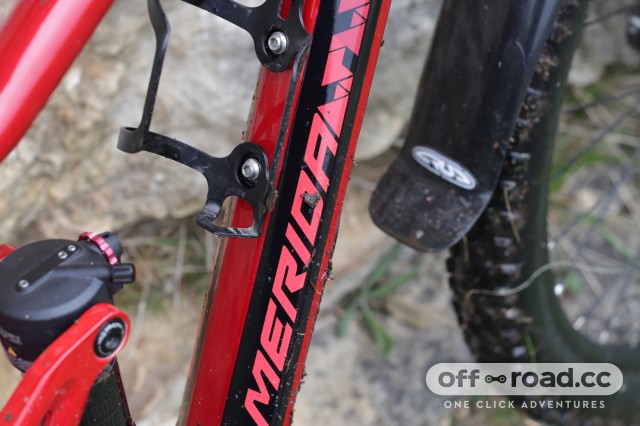 All of that good promise would be worthless if the geometry wasn’t up to scratch, but thankfully the Merida has pretty reasonable numbers, if not the most progressive. The size large here has a 455mm reach, 1,185mm wheelbase, 67.3-degree head angle and 75.5-degree head angle and 435mm chainstays. There are four sizes for the 29” and two smaller sizes on 27.5” wheels so there’s every chance you’ll find a good fit. 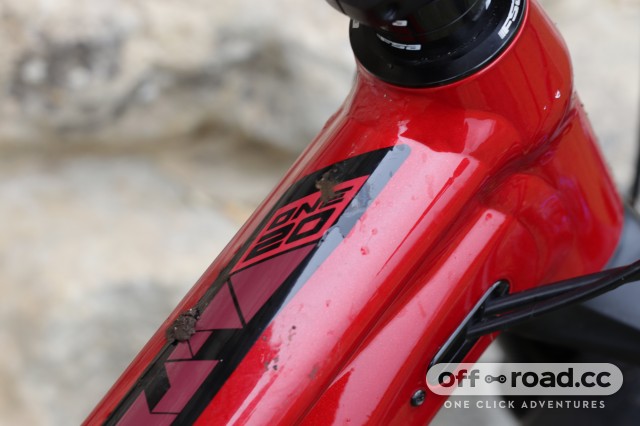 On the trail, while it would be easy to criticise Merida for not being a bit bolder in the reach department, the One-Twenty produces very good handling that is right at home ripping typical British singletrack. The bike feels well balanced and is pleasantly agile through twister trails and sure-footed enough when the terrain gets more technical, with an ability that exceeds the on-paper promise. 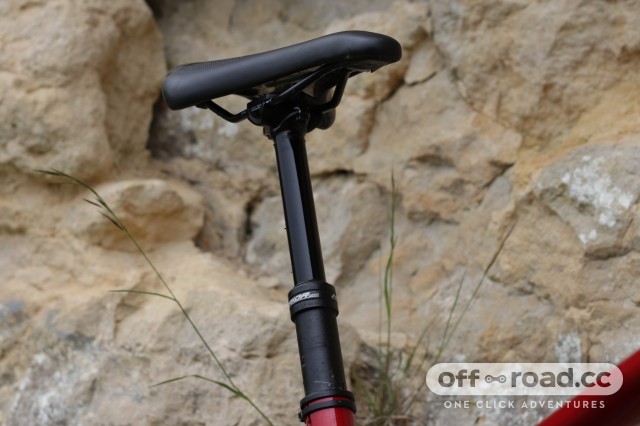 It’s got a nice peppy character, direction changes are easy to instigate from the 760mm handlebar and 50mm stem, while the Maxxis Forekaster tyres pump up the rolling speed so it feels quick and masks its weight on rolling trails well. On more challenging terrain where a 120mm bike ought to throw up its skirt in fright, the Merida surprises with a decent ability to charge through rocky horror show trails helped in part by the extra travel in the 130mm fork. 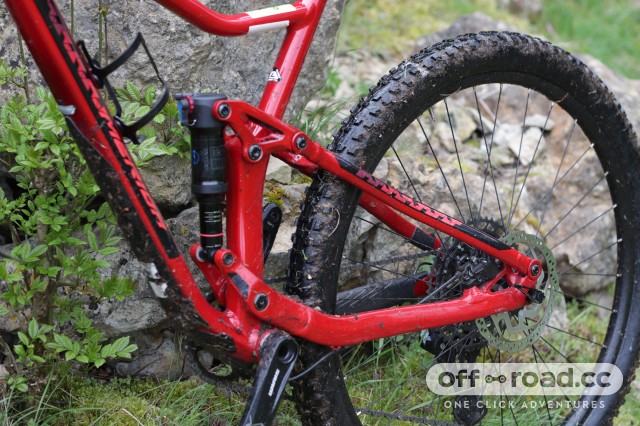 Merida’s Float Link suspension (the shock is sandwiched between the linkage and the extended chainstays) is used across the company’s range right up to the bigger One-Sixty, and it works extremely well and contributes to how fun and capable the bike is. The 120mm of suspension feels peppy and sensitive to smaller rocks and roots and when you get into bigger more challenging terrain it resists bottoming out with a thud. There’s a lockout lever on the shock but you can ignore that, it’s suitably well controlled on the open setting for all trail riding situations. 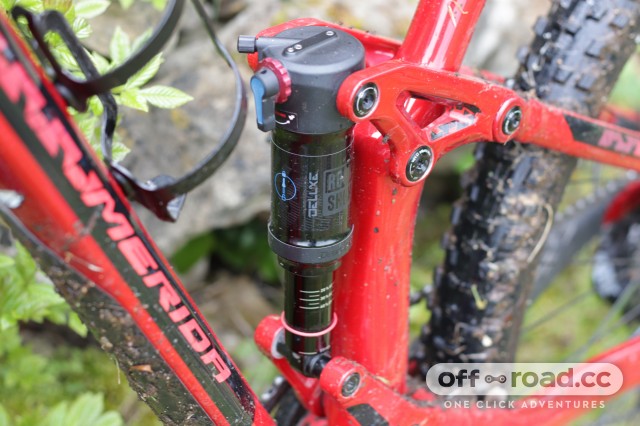 The RockShox Delux RL shock is a good match for the frame and provides a buttery smooth action with plenty of sensitivity in the first stages of the travel, helping it to smooth out bumpy tracks and small rocks, roots and ruts. You can play around with volume tokens but I felt the stock tune suited the One-Twenty very well, showing that Merida has done its homework. Sag markings on the shock make it very easy to set up.

Up front, the RockShox Sektor RL fork might not be the sexiest fork on the market but the 130mm travel is nice and smooth and has good small bump sensitivity whilst providing good support to handle big drops without pitching you over the bars. The damping keeps it behaving nicely when pushing harder and into repeated impacts, and while it’s the assumed thing to say it’s not as adept as a pricer RockShox fork, the performance it delivers is very impressive given the ticket price of the Merida. 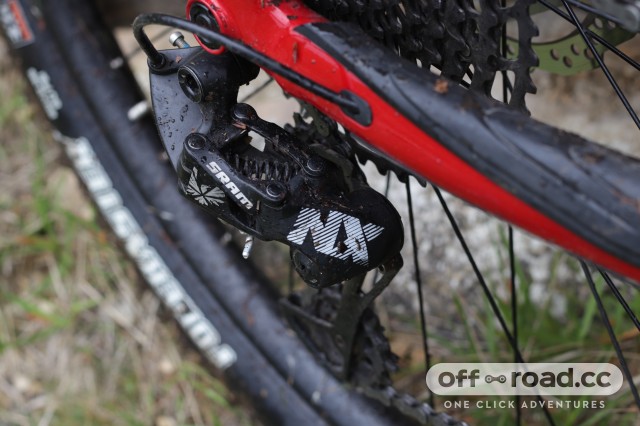 Thanks to SRAM’s aggressive strategy to push 1x to ever lower prices, the new NX Eagle brings the latest 1x12 tech to the most affordable price point yet, and makes this £2k Merida very compelling because of it, and is arguably a good reason to save a bit more over the cheapest Merida One-Twenty. 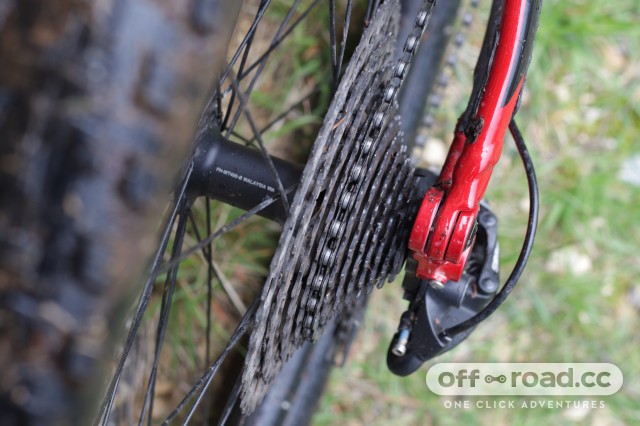 With NX Eagle you get all the familiar tech as found on the posher SRAM Eagle groupsets, so it’s still 12-speed and there’s a clutch-style rear mech and a narrow/wide chainring to keep the chain from dropping off. The big change is in the cassette: instead of a 10-50t cassette on a special SRAM XD driver, you get an 11-50t fitting a regular HG freehub. The result is a 454% range instead of the 500% of the more expensive groups, but does mean you probably have easier wheel upgrade options.

For the most part, there’s very little drawback in that slightly reduced range when you’re actually riding. The huge 50t sprocket is still there and very useful for hauling the weight of the Merida up steeper climbs, and down into the middle of the cassette, there are decent steps that don’t massively upset your rhythm on rolling trails. Gear changes are clickity click perfect and you get all the chain retention tech you need to prevent dropped chains. 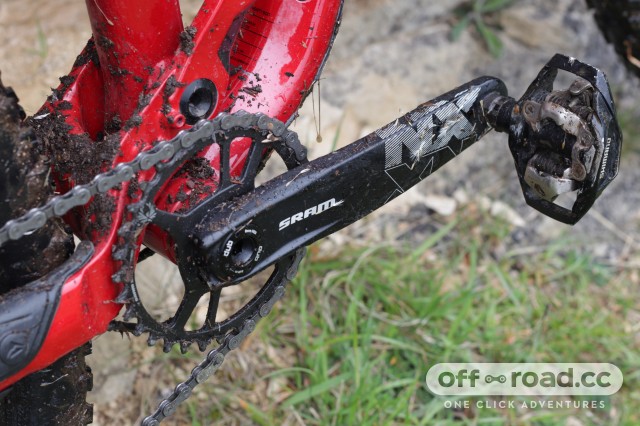 It’s not light though; the principal disadvantage of NX is that to hit the low price heavier less advanced machining and lower grade materials have been used. The NX 1230 Eagle cassette weighs in at over 600g which is loads more even GX above it, and a boatload more than X01. However, NX Eagle is compatible with all the other Eagle groupsets above it so you do have potential upgrade opportunities. 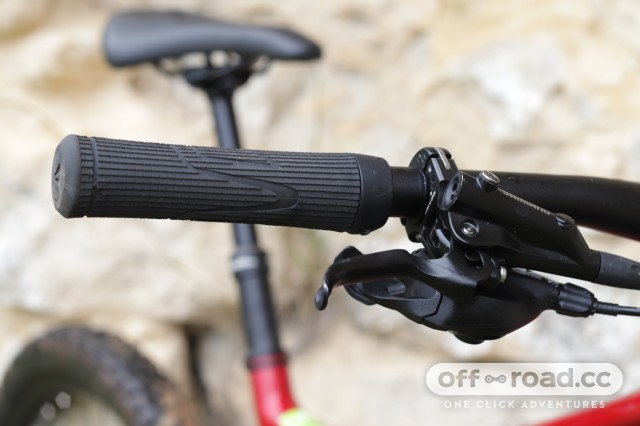 While it’s SRAM for the gears, it’s Shimano MT-500 hydraulic disc brakes with 180mm rotors front and rear. That’s fine by me, I’ve always like the lever feel and shape of Shimano disc brakes and these provided all the stopping grunt I needed to bring the Merida’s rampaging speed under control. I’d like external reach adjustment but once you’ve fiddled with it on the first outing it’s a set-and-forget thing so it’s forgivable. 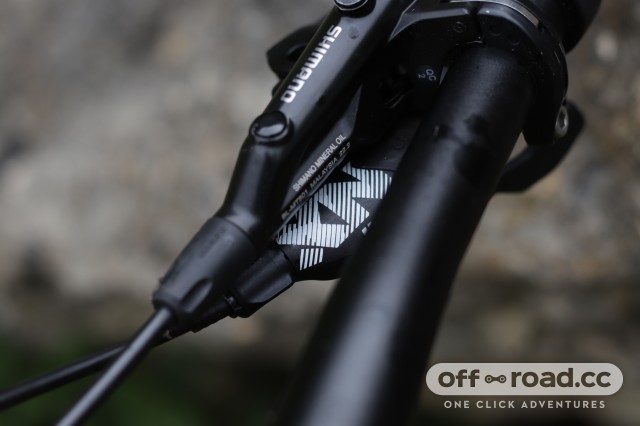 Helping to offset the weight of the Merida are the fast-rolling Maxxis Forekaster tyres. They’re not the best tyre for year-round UK riding as they hit their limits in the mud pretty well, and hard chargers might prefer a beefier tyre with chunky treads, but for cross-country riding they zip along nicely and find good grip on dry to damp trails and roots and rocks. 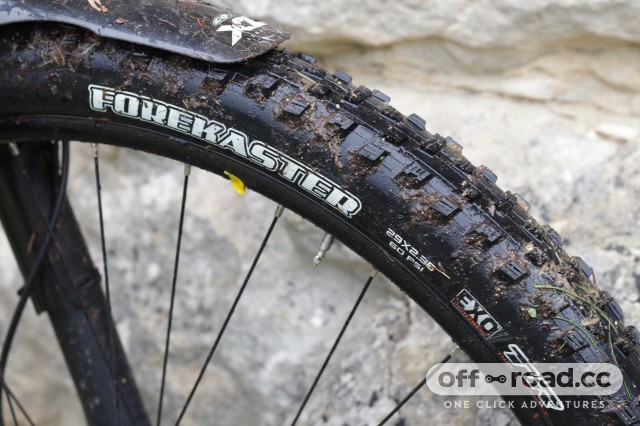 Providing a wide platform for the tyres are the Merida branded Expert TR aluminium rims, with a 29mm internal width. They’re also tubeless-ready and while the test bike had inner tubes, switching to tubeless would be the first job I’d engage in when buying this bike for the small price of some tubeless valves, tape and sealant.

For engaging riot mode on the descents, you get a Merida branded Expert TR dropper post with 125mm adjustment (on the M/L/XL bikes; 100mm on the S) which works well from the handlebar remote. I’d prefer a longer dropper post because with the low top tube and my long legs I had plenty of seatpost sticking out of the frame. 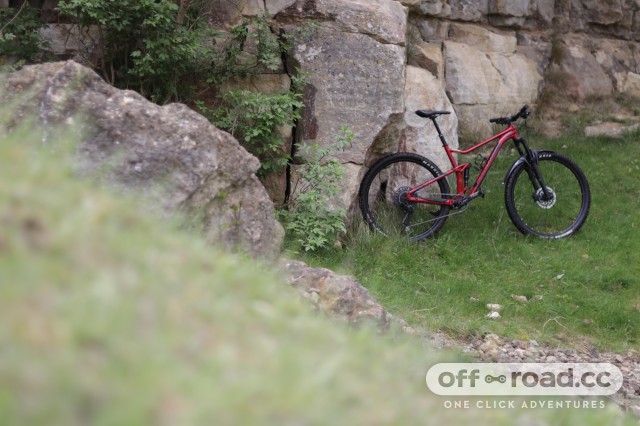 You’re never going to feel out biked on the One-Twenty but it rarely feels outgunned by the terrain, and for a lot of typical UK trails when you’re charging up, down and across the landscape, it’s a very competent and capable bike. It’s a tad heavy but it’s par for the course at this price, but the equipment choices are all sensible and add to the good ride quality.

Lightweight 6066 series aluminium triple butted and hydroformed frameset with ‘Smooth welding’ and internal cable routing. Tapered head tube for precise steering, Boost standard and rear through axle for rear end stiffness. Floating shock provides 120 mm of travel. The lower shock mount moves with the system to deliver plushness and pedalling efficiency. Our engineers can precisely influence the transmission ratio and progression, which means that a ‘Float Link’ system is very sensitive, delivering great support in mid-travel and the appearance of more than the model name suggests. Our ‘Float Link’ rear ends create the feeling of almost bottomless travel whilst remaining perfectly controlled when climbing. Based on the already hugely versatile geometry of the former ONE-TWENTY, we have further lowered the standover height to give the rider ample space to manoeuver. We also slackened the head angle and shortened the chainstays by 10 mm resulting in an even more playful bike while offering the perfect compromise between being a great climber and an agile trail bike.

The Merida provides very good value for money in this competitive £2,000 price bracket

The Merida provides excellent performance across the board

It's a bit heavy but it'll get you fit!

You’re never going to feel out biked on the One-Twenty but it rarely feels outgunned by the terrain, and for a lot of typical UK trails when you’re charging up, down and across the landscape, it’s a very competent and capable bike. It’s a tad heavy but it’s par for the course at this price, but the equipment choices are all sensible and add to the good ride quality.