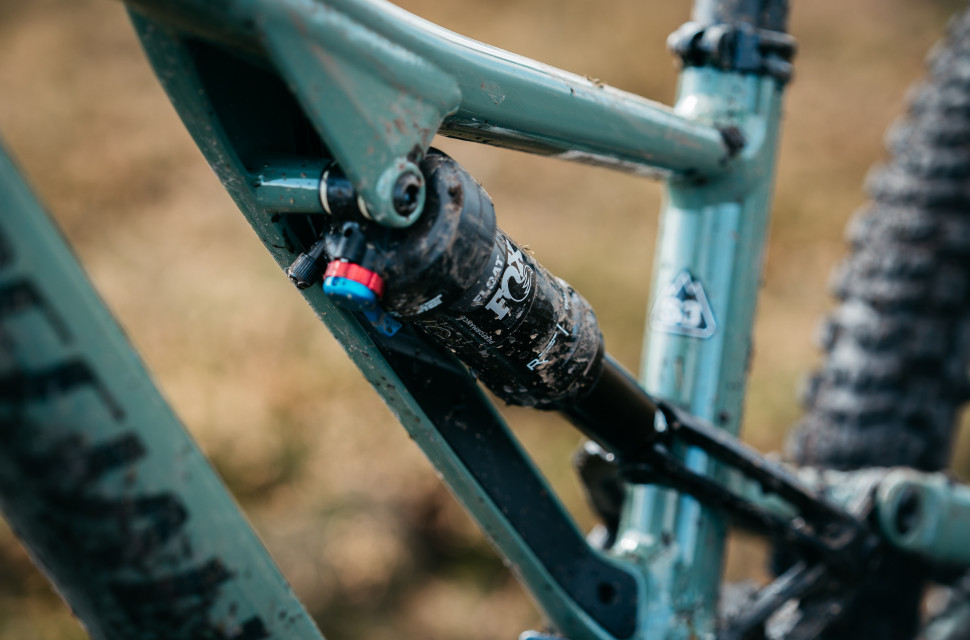 The Fox Shox rear shock range features suspension units for all sorts of bikes from cross-country race machines to trail bikes to downhill brawlers. Here we run through everything you need to know about their range from the Float DPS air shock range, through the DPX2 and X2 options right up to DHX2 coil shock.

Everything you need to know about Fox Shox rear shocks

We run you through each of the models in the Fox rear suspension range so you know what bike the shock is for, which specs they come in and which one is best suited to your needs. Either scroll away or hit the link below to jump directly to that shock. If it's Fox forks that you really want to know about then click here.

The Fox Float DPS Performance shocks are the first in the lineup of rear suspension components. All black with an adonised air sleeve they are available in imperial sizes only (that means none of that new metric stuff here). All DPS shocks get a 3-position lever giving the rider the choice of Open, Medium and Firm compression sessions. Behind this lever is a red rebound dial and of course, as this is an air shock, you can adjust air pressure too. Alongside this, you can add or remove volume spacer tokens to further tune the feel of the shock and the bottom-out resistance.

The shocks get the brands EVOL air spring. This is Fox's air spring system used across the entire range. The EVOL part stands for 'Extra VOLume' and indicates that it has a larger negative air spring than previous Float designs in order to make the initial part of the travel more linear. 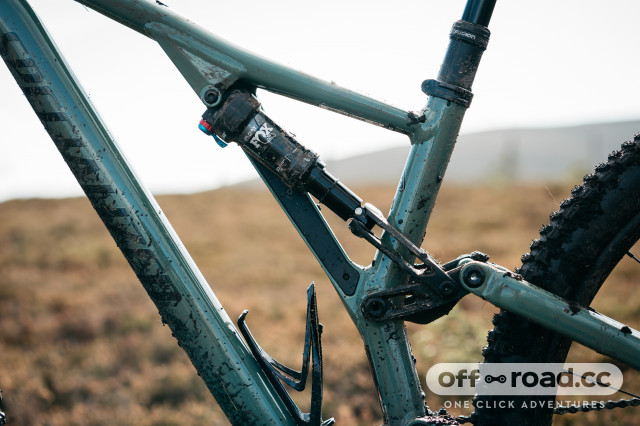 The Fox Float Factory shock is fundamentally the same as the Performance version but Factory denotes that this is the top spec model with lots of features. This shock comes in both imperial and metric sizes with the choice of a 3-position lever as on the Performance version or a 2-position lever with bar fitted remote. Ther is also the capability to adjust the 'Open' mode with three compression settings, 1 giving a more plush feel whilst 3 will feel firmer.

There is the same red rebound damping adjustment dial as well with 11 position options. Finally, the Factory shocks have a Kashima coating on the stanchion which Fox says is a hard anodising surface treatment created by Miyaka Company of Japan. It consists of "lubricating molybdenum disulfide deposited via electrical induction into the billions of micro-pores on the surface of hard-anodized aluminium for better lubrication and less abrasion and wear." So, now you know..... 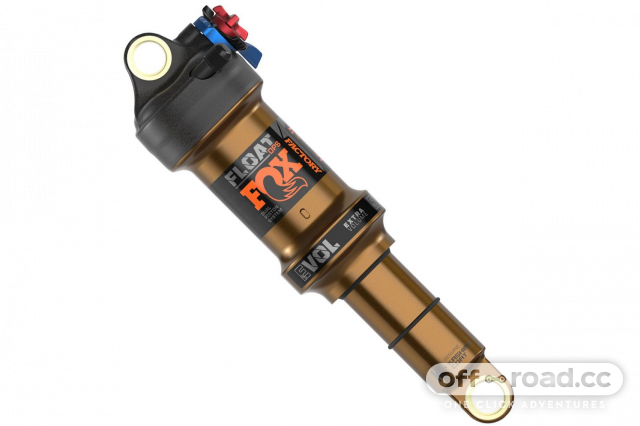 This shock sits between the two above and is OEM only, which means you might get one on a bike you buy or you might find one to buy second hand but you can't buy this new. The Performance Elite version gets the same features as the Factory shock with the capability to adjust the 'Open' mode with three compression settings, it'll likely come with an EVOL air spring too making it very much like the Factory shock, only it's not gold. 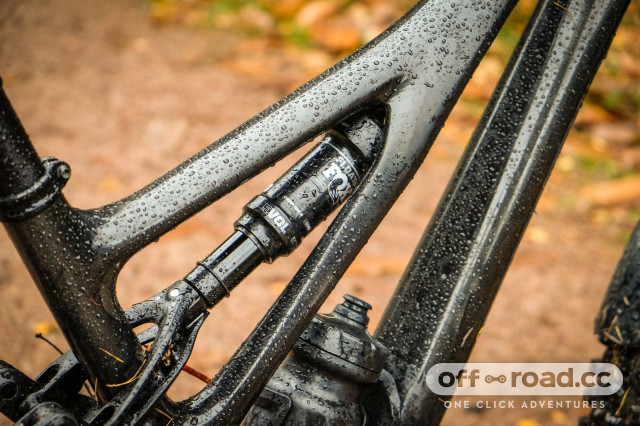 Deemed to be a lightweight trail shock, the DPX 2 Factory comes in two guises, one with a 3-position lever and one with a 2-position remote. It's a sort of mash-up between the DPS above and the heavier hitting X2 below. Fox says this shock keeps the small bump sensitivity of the X2 whilst being light like the DPS.

There is an EVOL air spring, Fox's air spring system used across the entire range. This provides a larger negative air spring n order to make the initial part of the travel more linear and more supple.

The 3-position lever version gets Open/Medium/Firm modes with an adjustable 'Open' mode like the DPS Factory shock and, of course, its Kashima all over. There are 10 clicks of rebound adjustment in the Open mode. Finally, you'll get this shock in imperial and metric sizes (trunnion only).

As for the DPS shock, you'll also find a Performance Elite version OEM on new bikes. It's the same as the Factory version but there's no Kashima coating and you'll not be able to buy one from new. 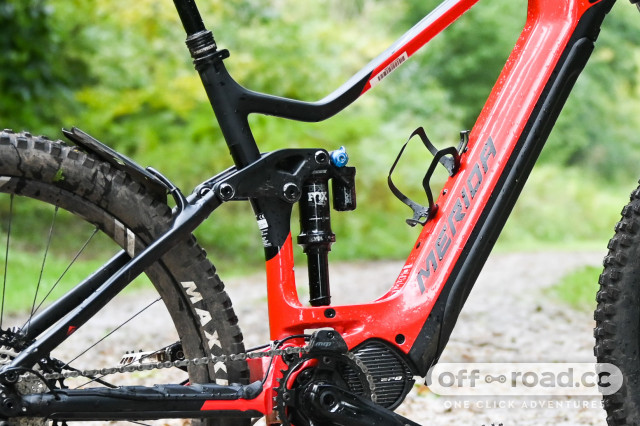 Top of the range sits the Float X2 Factory shock, it's a flagship shock built for longer travel enduro and all mountain bikes. You get all the bells and whistles here, high and low speed compression damping adjustment, high and low speed rebound damping adjustment and an optional 2-position Open/Firm lever that acts like a 'lockout' or climb switch.

Fix says there have been many updates for the 2021 shock including, a new chassis and damper, a new progressive bottom out bumper, lower friction seals plus improved bearing ratio for metric sizes.

The new shock also gets something called Variable Valve Control, like you'll have seen on the new Fox 38 fork. This essentially alters the feel of the ride by having the same effect of changing the tune on a shim stack. Something that can only normally be carried out by a technician. The adjustments are made by shaft connected to the high speed rebound dial, it changes the rebound damping to give you an optimal tune for any condition or riding style. 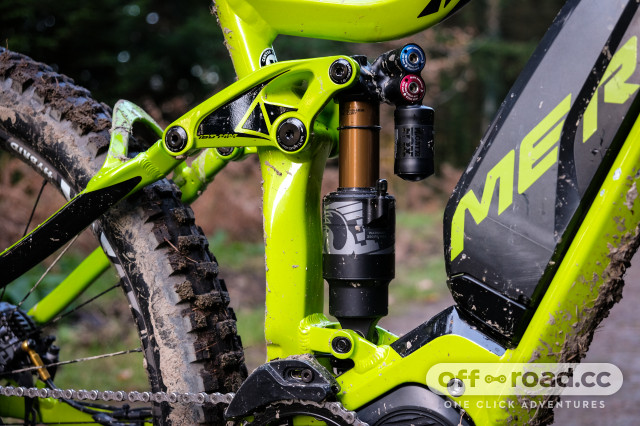 Yep, you guess it, you can get a Performance Elite version of the X2 which is black, not gold on bikes you buy (OEM only), like this Specialized Enduro. 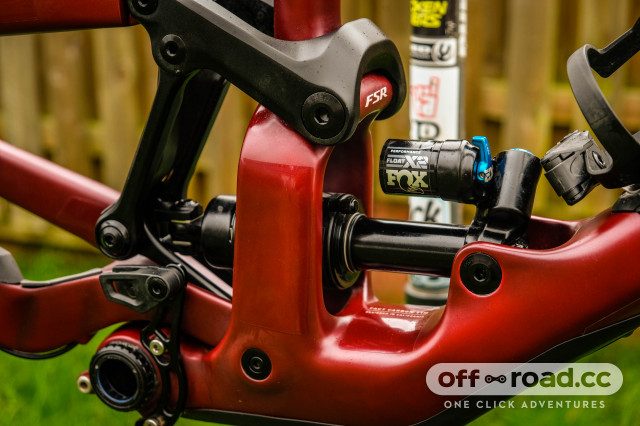 The DHX2 is the coil shock in the family, sporting a damper shaft and coil spring rather than an air spring. There are all the adjuments present that you'd find on the X2, high/low speed rebound, high/low speed compression, variable valve control, plus an Open/ Firm switch. The shocks are available in eye to eye lengths from 210 to 250mm and stroke lengths from 50 to 65mm. 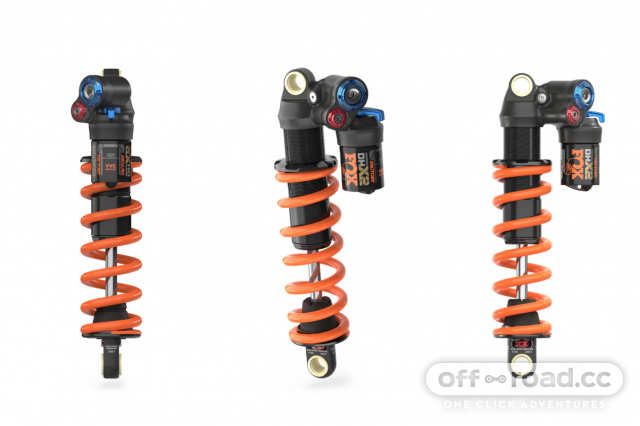