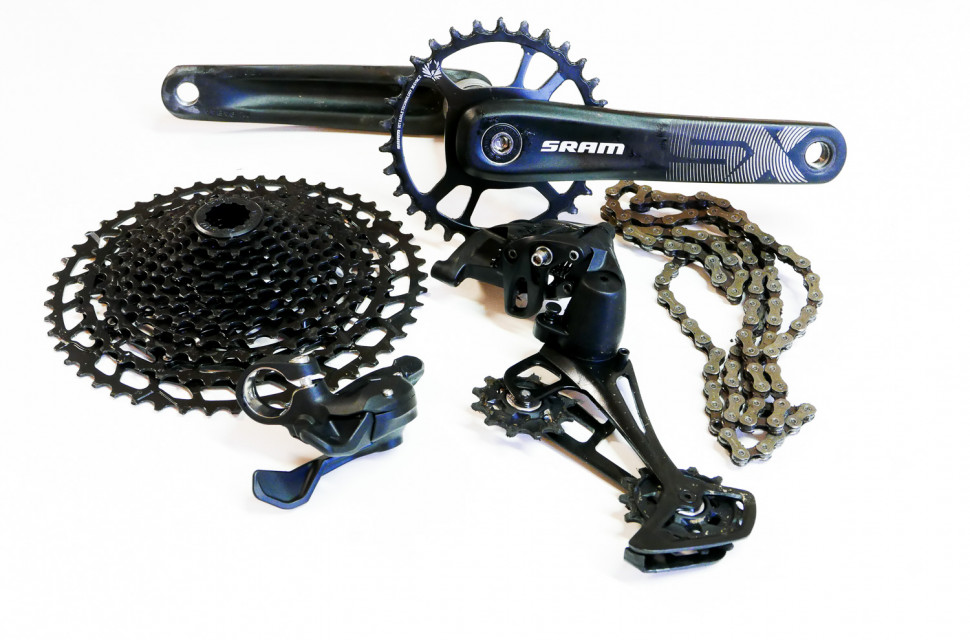 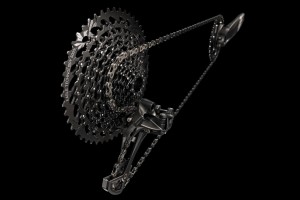 Deals for the Dirt from SRAM, Schwalbe, Mvic, IXS and more
33% off new XX1 Eagle here

SRAM's SX Eagle groupset uses much of the technology seen on the brand's high-end groups to bring down a wide-range, 12-speed single ring drivetrain to a much lower price point. Although it's not available aftermarket, it is becoming a common sight on a lot of complete bikes, so we took a deep dive to get full groupset weights and some interesting tech details.

The SX Eagle groupset sits at the lowest rung of SRAM's 12-speed Eagle drivetrain lineup, but all the components share a similar outline, most obviously in the largest 50T sprocket of the cassette. However, in order to hit the sort of low price point that allows manufacturers to spec it on bikes costing around £1,000, a number of material and technical changes have been made. 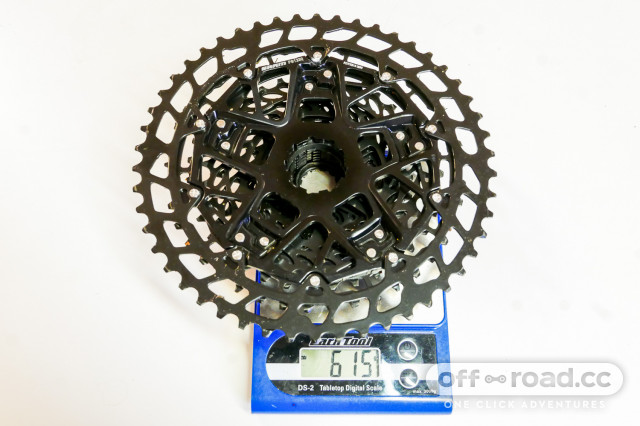 Much like the NX Eagle group above it, the SX Eagle groupset doesn't quite get the huge 500% range of the top tier groups as it uses a conventional Shimano HG freehub body rather than the dedicated XD driver. That means being limited to an 11T smallest sprocket on the cassette rather than the 10T item, though still giving a very wide range of 454% thanks to the dinner plate-sized 50T sprocket.

Interestingly, every SRAM SX Eagle equipped bike we've had through the doors so far has been fitted with the PG1230 cassette, which is NX rather than the SX level PG1210. We're unsure what the technical, material and weight differences are, but the PG1230 cassette weighs a chunky 615g and we'd expect to see the PG1210 unit be a touch heftier, if anything.

We've asked SRAM about the differences between the two units and we'll update as and when they reply or we get out hands on an actual PG1210 cassette. 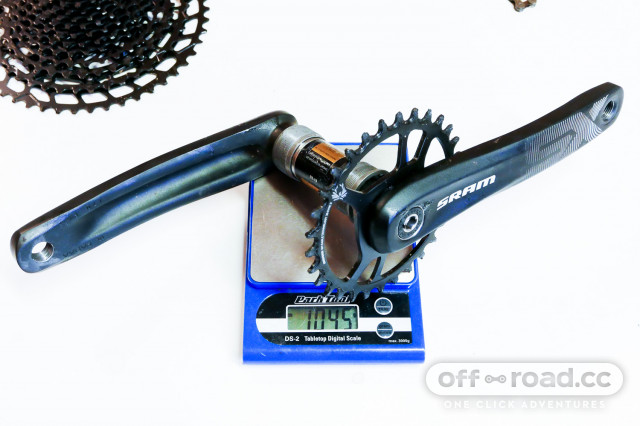 As SX Eagle is an original equipment (OE) groupset not available aftermarket, some SX branded components can be different to others depending on what a manufacturer wishes to spec. The chainset is a particular case in point. It comes in at least two variants, with an outboard/Press-Fit bearing 'DUB' bottom bracket and crankset setup as well as a cheaper inboard bearing 'Powerspline' bottom bracket, which we have here.

We've not got our hands on the DUB variant, but this inboard bearing setup is likely to be significantly heavier due to using a solid steel axle rather than the oversize, hollow DUB design. It's worth looking out for what's fitted to the bike - don't take it for granted they're all the same. As far as we can tell, both do use very similar solid (rather than hollow) forged aluminium arms though. 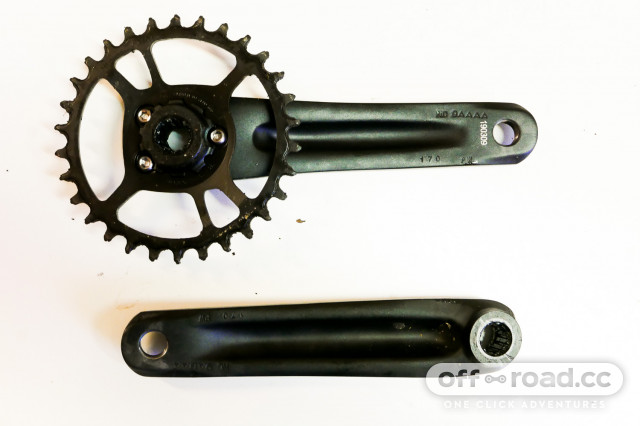 It's nice to see that it uses the same direct-mount chainring as other SRAM Eagle groups, admittedly using stamped steel rather than machined aluminium for the ring. That means changing ratios or moving to a lighter ring is just a case of undoing three Torx bolts. 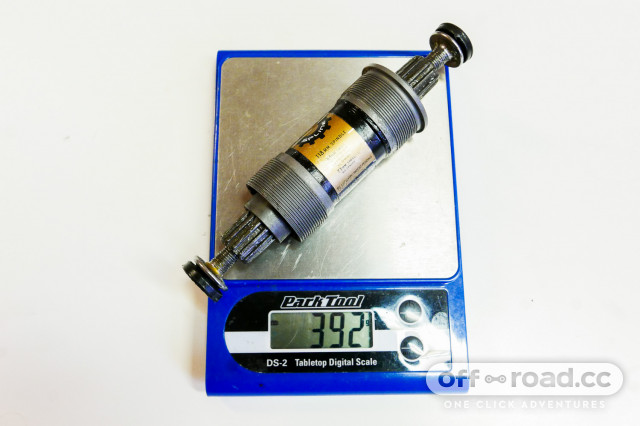 Tipping the scales at 1,045g for a set of 170mm Powerspline arms with 30T ring, it's no lightweight, with a substantial 392g of that just in the Powerspline bottom bracket. 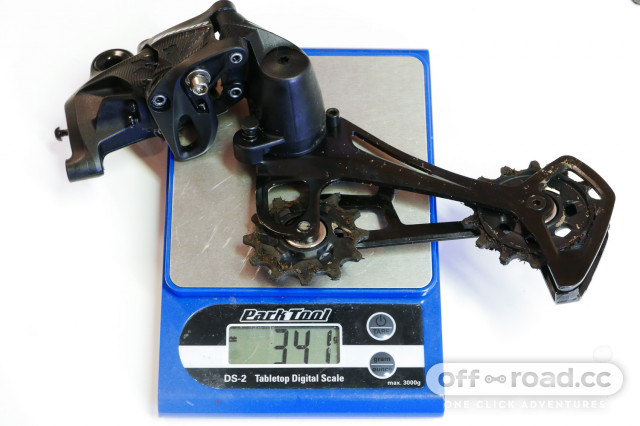 The derailleur once again shares a similar outline with the higher-level groups, with the use of different materials allowing SRAM to produce it at a lower price point. The cage is made of stamped steel pieces with the mech knuckles being made of injection moulded plastic, held together with rivets, presumably without any special bearing or bearing material.

The limit and B tension adjusters are more coarsely threaded than on higher-end Eagle units, and the plastic jockey wheels run on plain (rather than ball) bearings. 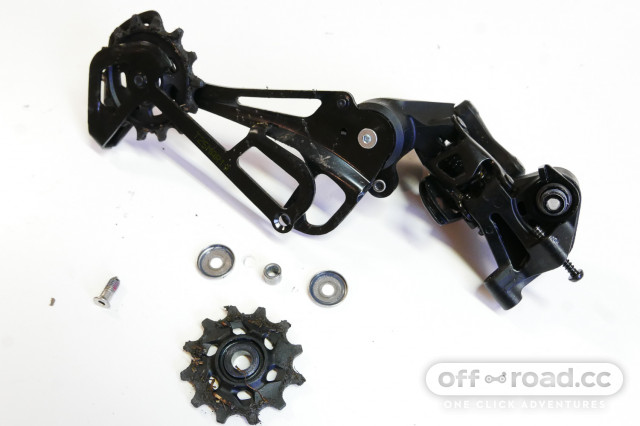 Tipping the scales at 341g, it's not that much chunkier in real terms than the top of the range XX1 Eagle, which comes in at around 265g, though the latter does get a considerable number of other upgrades that are more about improving stiffness and durability that reducing weight. 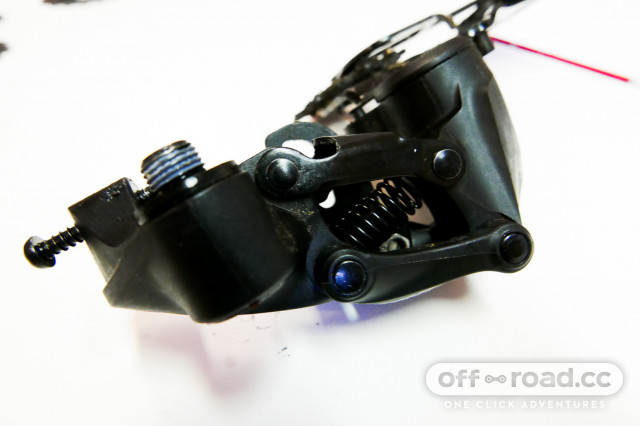 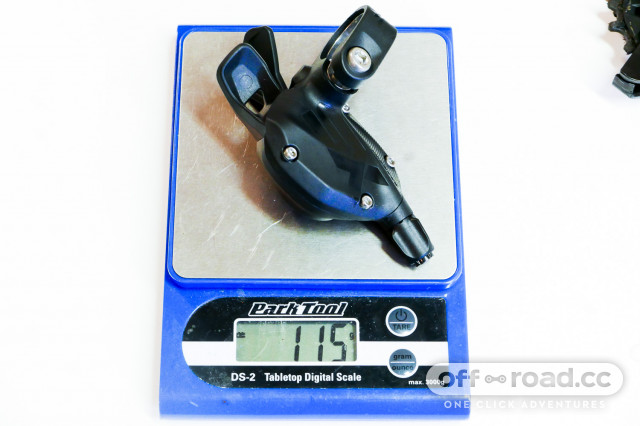 The 12-speed SX Eagle shifter once again has a very similar look and feel to the more expensive options, but it uses a band-on mount that's fitted to the upper cover. That means it can't be fitted to SRAM's direct-mount bands to integrate with their brakes and dropper posts and the broad clamp takes up a bit more bar space as well. 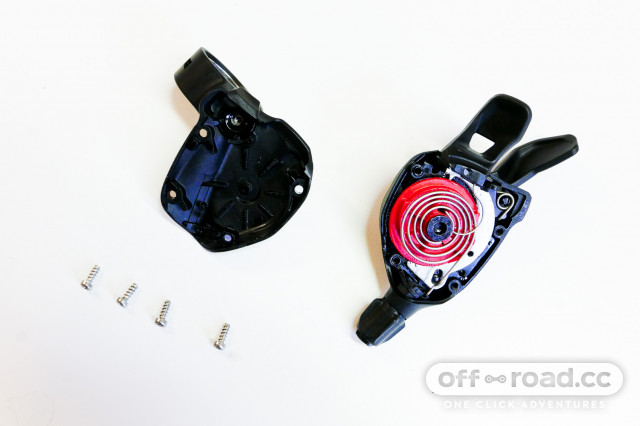 As with other SRAM shifters, you need to take it apart to change the gear cable, though as it uses four separate screws, it's a bit more involved that higher-level groups that are secured with a single bolt.

The shifter allows you to shift five sprockets up the cassette in a single throw, using a lever that has a fixed position, rather than the reach-adjustable unit used on XX1 Eagle and X01 Eagle. As with all SRAM shifters, you can only move down the cassette one gear at a time using the thumb-actuated paddle.

At 115g to X01 Eagle's 132g, it's actually marginally lighter than the top flight Eagle group, but once again the posher unit uses stronger materials and a more adjustable design that pays off in terms of shift feel and general ergonomics.

Either way, we hope this article has helped with any tech questions you might have had about the most affordable 12-speed drivetrain on the market. We aim to fully review an SX Eagle group as soon as we can get sufficient testing time on one...