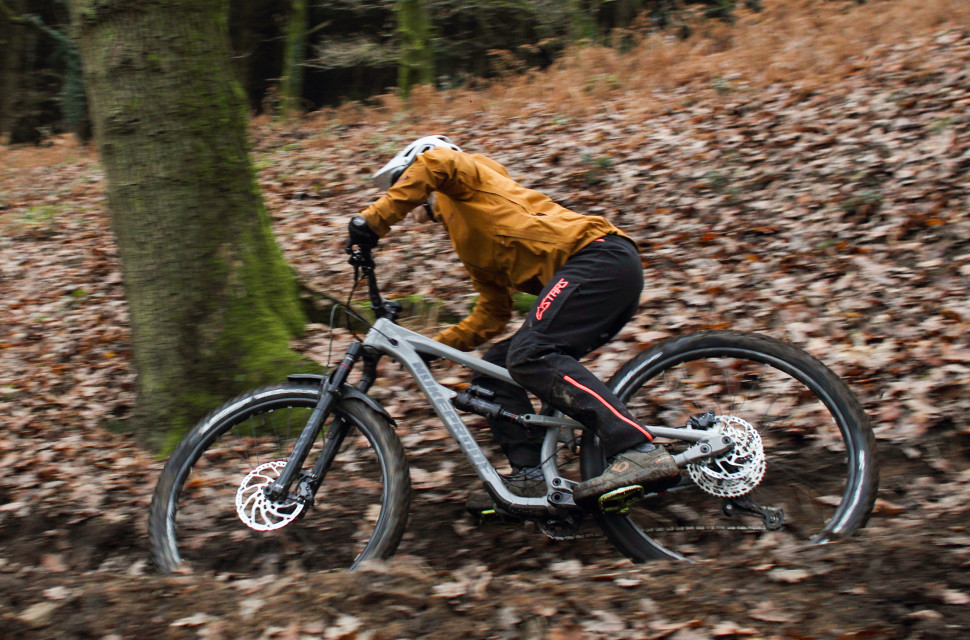 The 2021 Nukeproof Mega 290 Alloy is a hard hitting all-mountain 29er ready to tame your local tech. It's not light but pedals supremely well, while the progressive geometry makes it a great all-rounder as well as an enduro shredder.

The Mega 290 Alloy Comp is the base model of the two aluminum bikes in the lineup, and comes in at a penny under £2,700. The frame features tube-in-tube internal cable routing, and this year there's room for a water bottle slung nice and low in the frame. As much as we'd all say suspension layout is our number one priority in frame design, secretly we also want to be able to carry water for those hour-long laps without a bag... 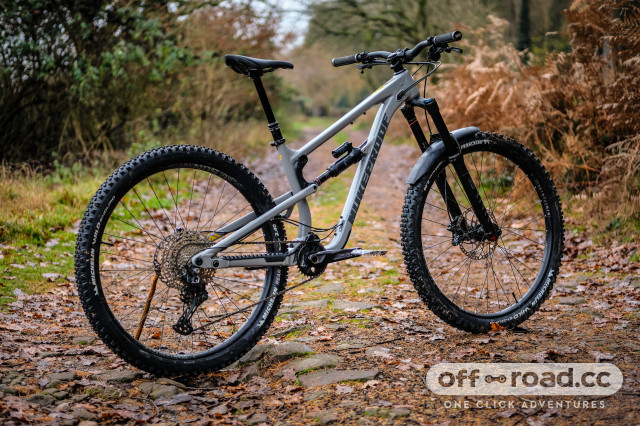 The bike gets 170mm of travel up front and 160mm at the rear, and we'll get to the new geometry in a bit – first let's take a look at the kit you get for your money. 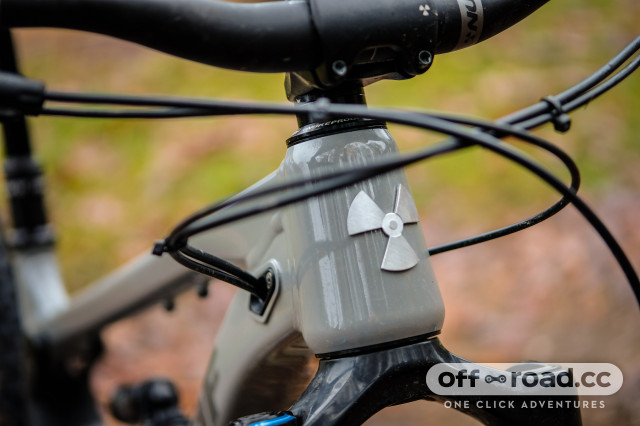 Up front sits a RockShox Yari RC fork. It's the more budget-friendly long travel option in the RockShox range, using the same 35mm stanchions as the Lyrik but a more basic Motion Control damper alongside the DebonAir air spring. 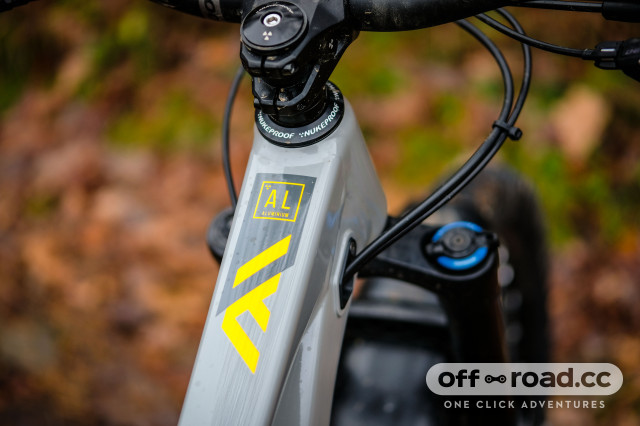 At the back sits a RockShox Super Deluxe Select R. This is the first in the line up of Super Deluxe shocks, which means it gets the basic rebound damping adjustment. 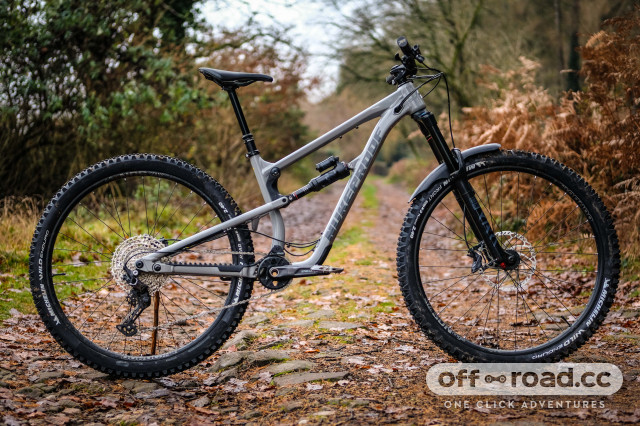 The fork is stiff enough but dives through the mid part of the travel rather easily, most noticeably on prolonged steep terrain and big drop-offs. It comes fitted with one volume reducer, but I'd suggest adding another for more support (though that can lead to abrupt harsh 'spikes' under really big hits, so experimentation is key). 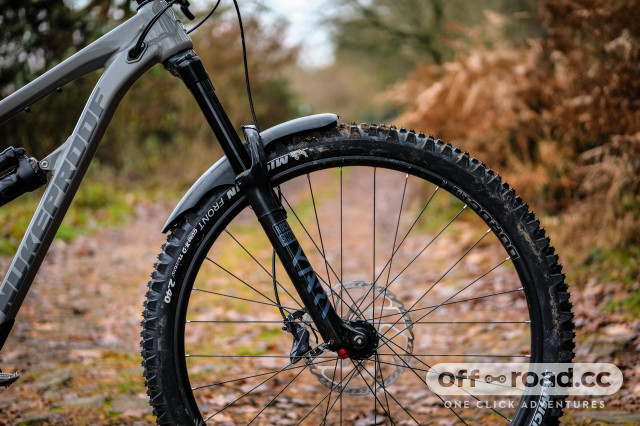 The rear shock gets a 'piggyback' chamber for a greater oil volume, easier cooling and a lower sensitivity to fluid expansion, which should lead in turn to more consistent damping on long descents. 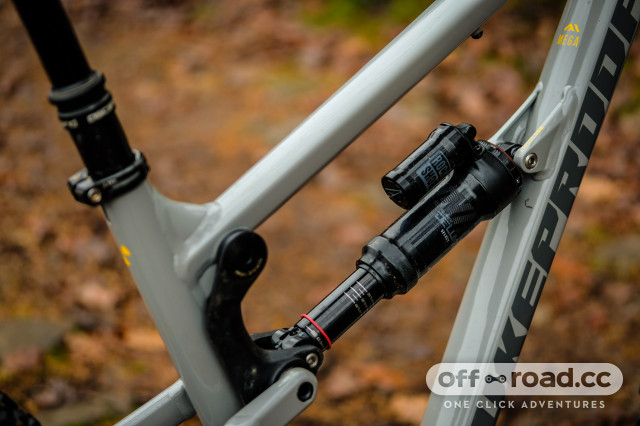 Nukeproof adds two volume reducers as standard, but again it could use more – three being the maximum. I used all of the travel quite frequently on the Mega, and initially ran a bit less sag (under 30%) to compensate, but it was adding a token that did the trick by allowing the shock to ramp up more at the end of travel. 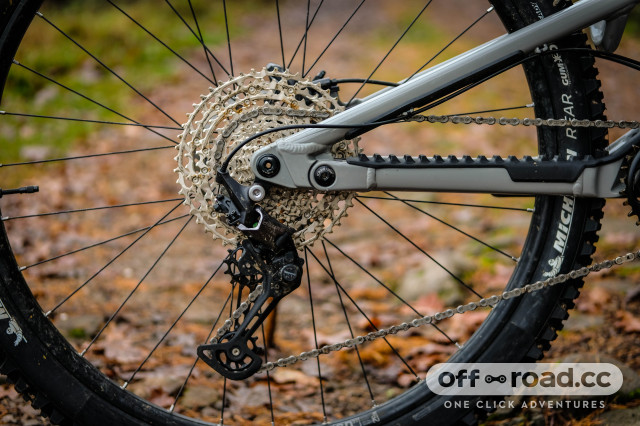 The drivetrain is Shimano Deore 12-speed, while the matching Deore four-piston brakes (M6100) use the new iSpec-EV so the levers sit together on one clamp – it's neat and tidy, though if you need to mount a clamp between it and the secondary support that arches back into the bars, it can be a bit of a faff.

The Deore components work seamlessly, and while the four-pot brakes have the classic Shimano on/off feel, for brakes that only cost £88 an end at full retail they're pretty powerful. 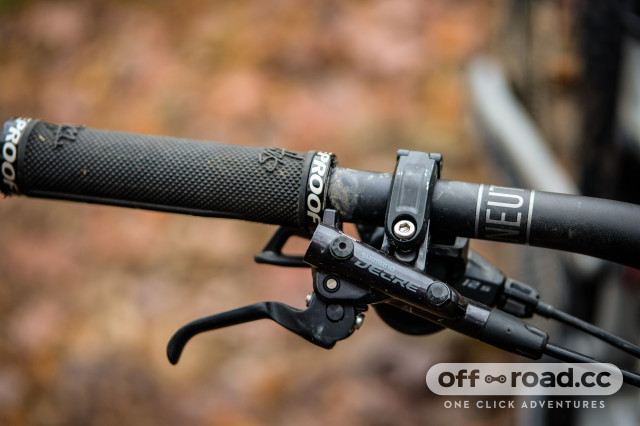 The Mega rolls on Sun Ringle Duroc SD37 Comp wheels fitted with Michelin Wild Enduro 2.4" Gum-X TS TLRs, but these tyres aren't quite up to the enduro nature of the bike. My otherwise favoured pressures saw me rolling the rear tyre in corners, as the Trail Shield carcass just isn't supportive enough for the Mega's weight and intent. Also, the Gum-X compound could be softer.

Michelin's Magi-X compound is stickier and its Gravity Shield carcass is stronger... which is why Nukeproof riders Elliot Heap and Sam Hill use if for the EWS. It's a shame it's not specced here.

Should you go for an upgrade, the 32mm internal diameter rims can happily support wider tyres than 2.4", and the Mega takes up to 2.6" front and rear. 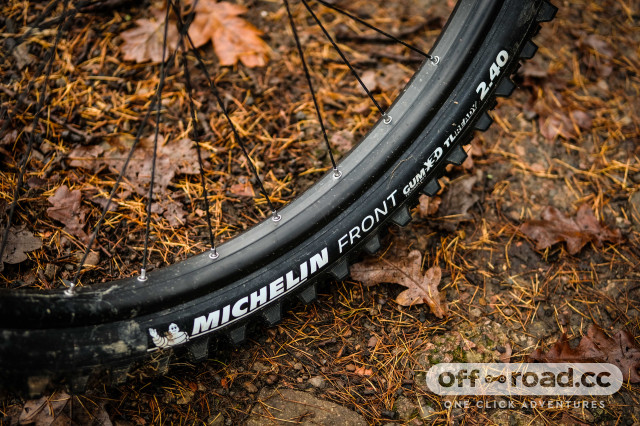 Final details come in the form of a neat MRP chain guide and, unsurprisingly, a Nukeproof cockpit with a Brand-X Ascend dropper post.

The seat post is size-specific with our medium test bike getting a 150mm dropper (Small bikes get 125mm, Large/XL get 170mm). Nukeproof's new Horizon saddle is a pleasant place to sit too – as a relatively flat, short, slim saddle, it fits the bill for aggressive riding and long days in the saddle. 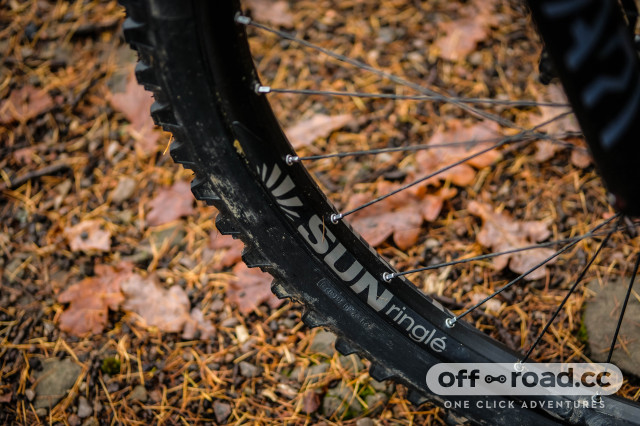 The Mega 290 Alloy gets a decently steep effective seat tube angle, and Nukeproof has carefully considered the effect of different seat heights, too.

It's all based on something Nukeproof calls 'saddle offset,' a measurement aimed at maintaining the ideal riding position across the size range – if you stick with one angle for all frames, tall riders end up further towards the rear axle as a result of needing the seat higher. 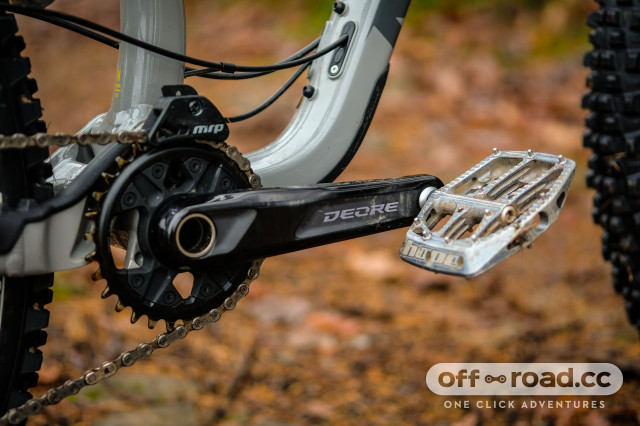 To avoid this, the three largest frames have a 0.5 degree steeper seat tube than the two smallest – so our medium has an effective seat tube angle of 77.5°, whereas the bigger frames are 78°.

Pedalling uphill is not only comfy in terms of seated position, it's also efficient, and that translates to it being physically easier to pedal too. The Mega feels nimble and responsive on techy climbs, despite its 34.6lb (15.6kg) weight. 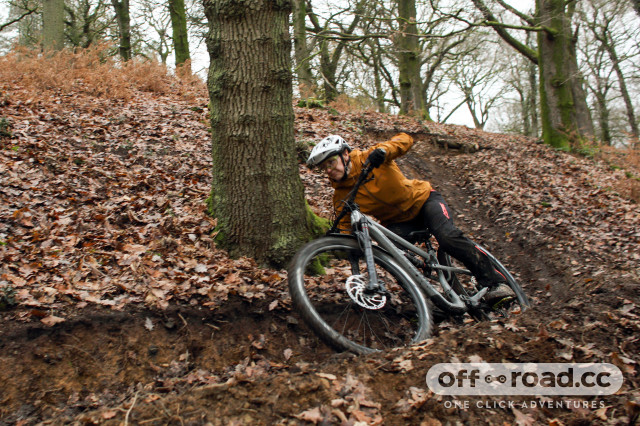 Turn the new Mega downhill and it's a composed beast, even in this base spec. The head angle admittedly could be pushed out further, but at 64° it's slack enough, while the Medium's 455mm reach feels roomy and purposeful on the trails.

The 440mm chainstays feel pretty well balanced too, though that could change when coupled to the 515mm reach of the XXL. 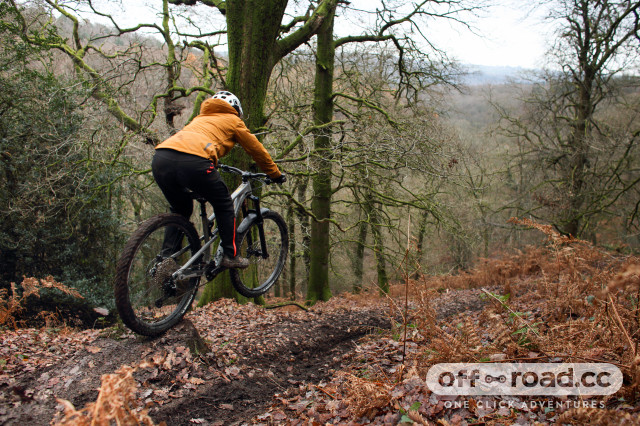 The 2021 Mega is definitely more sprightly and less 'ground-hugging' than I expected. How much is the altered shock tune making it more progressive earlier in the stroke, or the bottom bracket erring on the side of high, I don't know – it could be a combination of the two – but whatever it is, at times I do feel a little perched atop this bike.

It actually makes me wonder if I'd be better suited to the large frame with its 475mm reach. It would certainly be rideable for someone of my stature (160cm) given the short seat tube and short effective top tubes across the range. 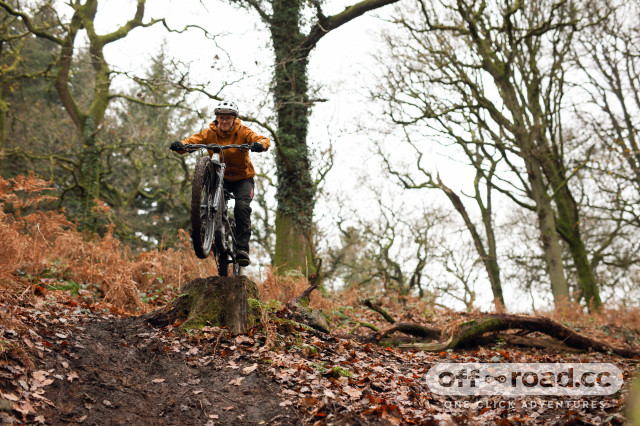 It's this nimble feel, however, that makes the Mega a great all rounder. It has the feel of a bike that can happily take you racing as well as for epic adventures to the lesser trodden bridleways of the UK. I rode this bike on all my regular test trails and had a whale of a time; it's lively without being unpredictable, and dependable without being boring.

The 'affordable enduro category' is certainly hotting up, and whilst £2,700 for this base-spec bike may seem steep, look closely at the competition and you find flaws which make the Mega a strong option.

The cheapest YT Capra is £100 more, wears SRAM SX Eagle which doesn't shift as well as 12-speed Deore, and the geometry isn't as progressive – it has a steeper head angle and slacker effective seat tube angle. You can't buy it from a shop either, so you miss out on local support. It does has a carbon frame, hower. 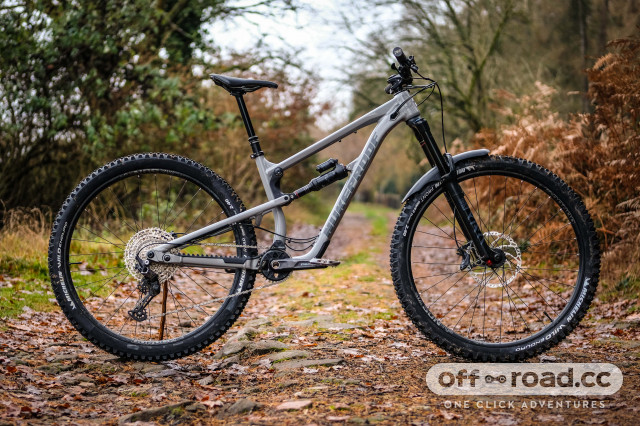 The new Vitus Sommet is £300 more and has a carbon front triangle, though the internal cable routing isn't as well sorted as the Nukeproof's and again you can't buy it from a shop. Also, with only four frame sizes there's nothing to match the Mega's XXL.

Lastly, the Commencal Meta AM 29 is £100 more and offers a lesser spec (SRAM SX with two-piston brakes), though its geometry is even more progressive with longer reaches, steeper effective seat angles and slacker head angles.

If you want either a mid-travel trail bike or an enduro bike, you may want to turn your thoughts to a Mega. It pedals really well and, whether you're racing, exploring or just messing around, it's a nimble, planted bike with a great spec and impressive frame details.