Skip to main content
Log In Register
Marin Rift Zone 2 2020 review £1,845.00
A fun, capable short-travel trail bike at a great price, but this spec is heavy 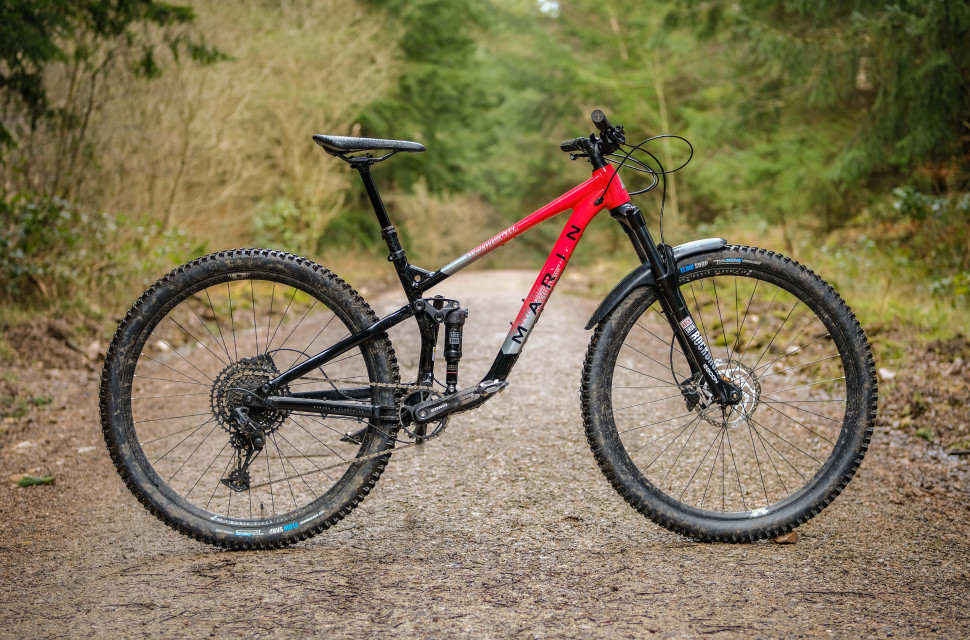 Rachael Wight
|
Mar 12 2020
|
Overall
Quality
Performance
Value
What's good?
What's not?
Buy if...
You're on a budget and want an excellent trail bike to upgrade over time

The Marin Rift Zone 2 is a 125mm full suspension trail bike that will please riders and wallets. While it’s heavy for a short-travel mountain bike, and the tyres don't suit its all-rounder intentions, the Rift Zone is a great proposition that's just begging for some choice upgrades.

The Rift Zone 2 gets Rockshox at both ends in the form of a Recon RL 29 fork and a Deluxe Select R shock. The Recon uses the Motion Control damper, and offers both compression and rebound damping adjustment. The shock offers just rebound adjust.


Shimano MT201 hydraulic brakes do the stopping with 180m rotors front and rear, while a SRAM SX Eagle drivetrain provides the go. 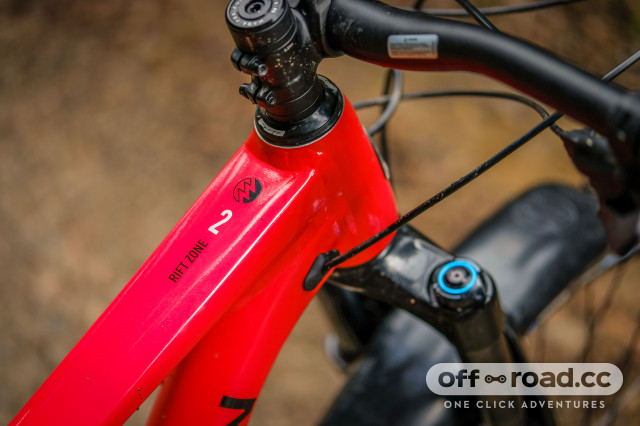 That SX Eagle drive, meanwhile, gives you all the range of the pricier NX Eagle for a little more weight but a lot less cost. It features an 11-50T cassette and a 32T direct-mount steel chainring, and plugs into a SRAM Powerspline bottom bracket wearing 175mm cranks. I’d like to see shorter cranks, especially on the smaller-framed bikes (I tested a medium).

Whilst the SX drivetrain is great for that big range, the clutch is questionable – the chain still slaps – and the shifting is clunky and heavy, if mostly reliable. 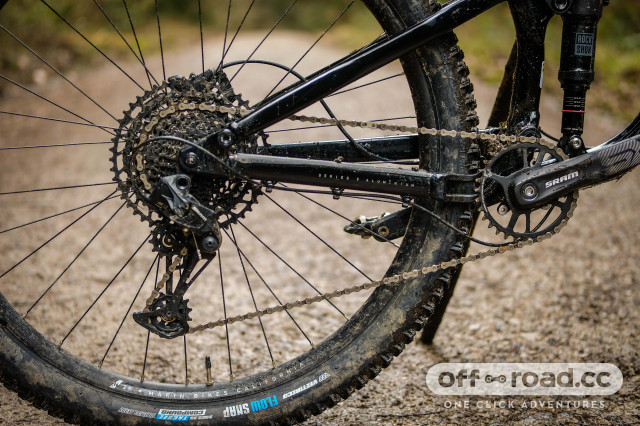 The wheels use solid own-brand rims in a good width (29mm internal), laced to unbranded 32-hole hubs. In the UK the Rift Zone 2 comes with Vee Tire Co's 29 x 2.3" Flow Snaps, in Tackee compound both front and rear. 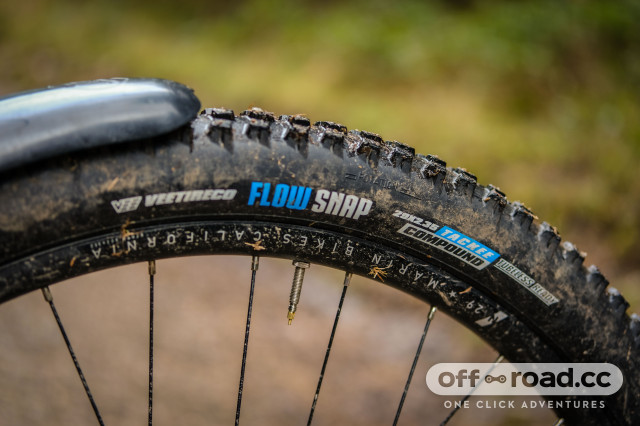 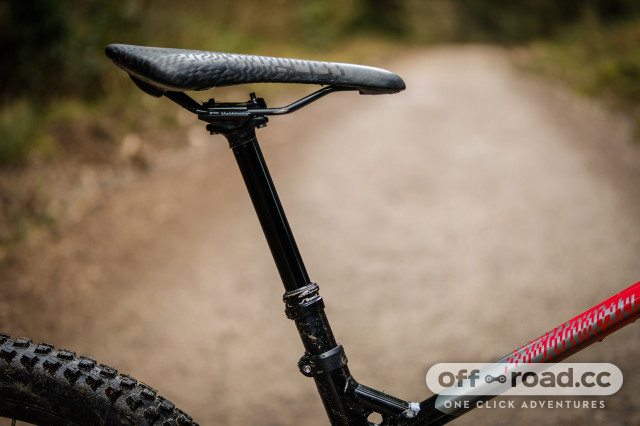 You also get a TransX dropper post. The medium and large frames get a 150mm, while the small wisely features a 125mm. There's not actually a lot of room for them in that kinked seat tube.

The photo above actually shows the post as far into the frame as it will go – which was unfortunately still too high for me when seated. Smaller riders may need to find a shorter-bodied dropper or use less post travel still. 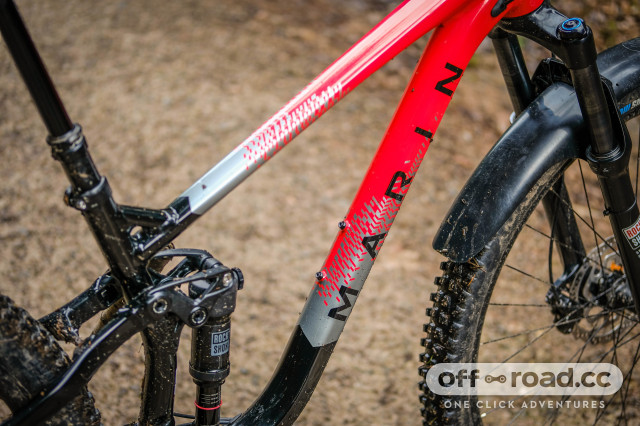 The Rift Zone 2 weighs in at 34lbs (15kg) which, especially for a short travel bike, is pretty heavy indeed. It appears a lot of this weight is in the drivetrain and wheels: we've weighed an entire SRAM SX Eagle drivetrain ourselves, for instance, and that's 2533g on its own.

Those solid rims with 32 spokes are also heavy, though on the flip side they're heavy-duty too, so they should last. Assuming your patience with them does... the rear hub has very few points of engagement, so both pickup and acceleration are slow.

The Vee Flow Snap tyres are a good place to start looking for an upgrade. Their aggressive tread pattern, ‘Tackee Compound’ (front and rear) and sheer heft (over a kilo each) really don't help with either acceleration or speed. Rolling resistance is high, and they seem to clog up fairly easily, making the bike heavier still. 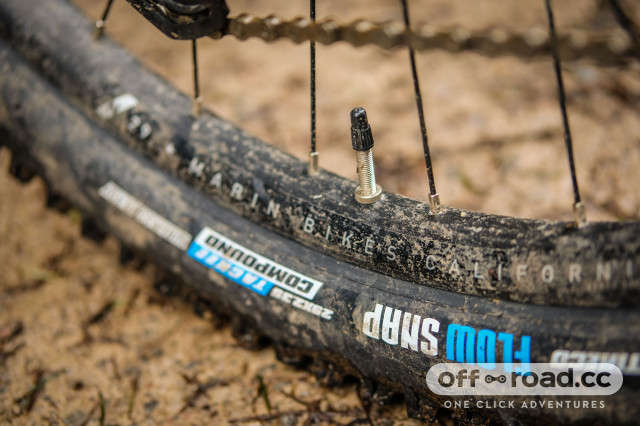 The weight, both overall and rotating, is energy sapping. Climbs are tough despite the steep, 76 degree effective seat angle. Even on the flat the Marin feels sluggish and hard work, which is disappointing for a short travel bike like this. 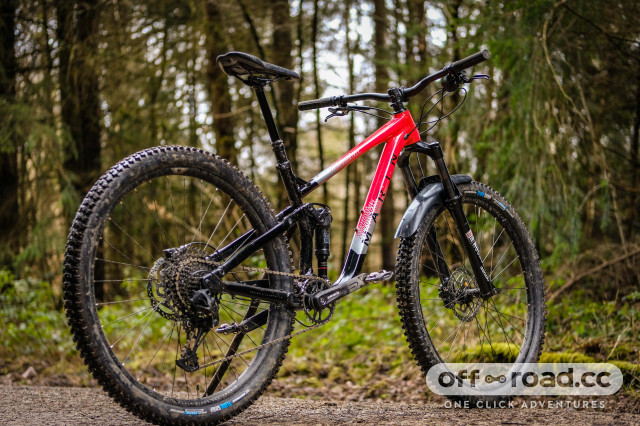 Descending , however, is another matter entirely. The Rift Zone rips up the trail with its hefty wheelset and aggressive tyres and – especially given the low-end nature of the fork and shock – it’s a great ride.

The suspension is eventually a limiting factor on your enthusiasm. Even with the correct sag and the rebound fully open, the shock is a little slow to recover, while I needed three clicks of compression damping to support the fork and stop it diving through its mid-travel. 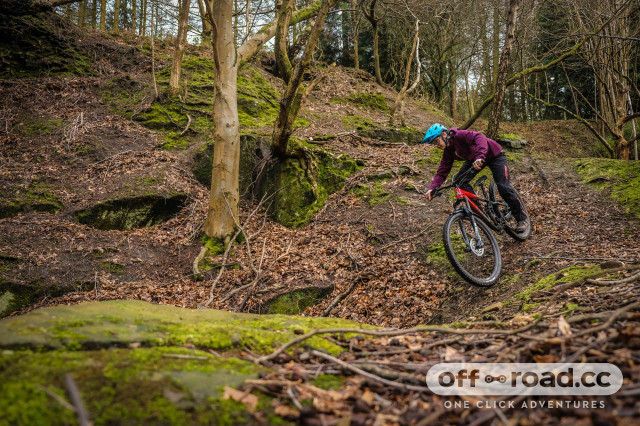 Set up like this, however, the Rift Zone 2 proves a capable trail bike. The geometry is progressive and confidence-inspiring, with a roomy reach of 455mm (medium frame) and 65° head angle. I’ve sent this trail bike through my local trails, round trail centres and the down the local downhill tracks too. The DH stuff was a little too exciting given the limited travel, but for everything else the Marin is game. 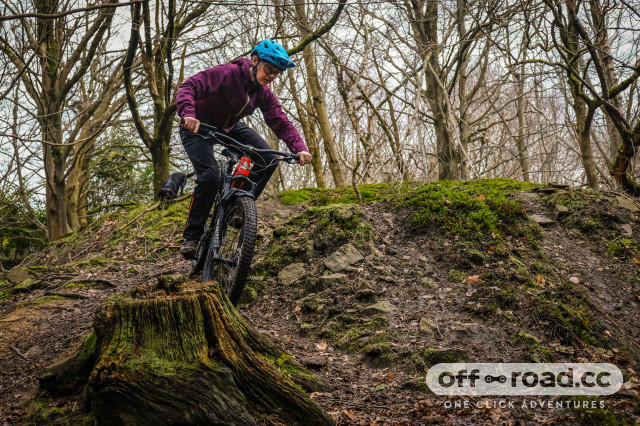 The Multi-Trac suspension – a linkage-driven single pivot – doesn’t bob on the climbs, and stays relatively supple over the rough when descending. It doesn’t smooth everything out, but leaves you feeling really connected. The short chainstay keeps the rear end snappy and quick to manoeuvre, while the riding position puts you firmly 'in' rather than 'on' the bike. 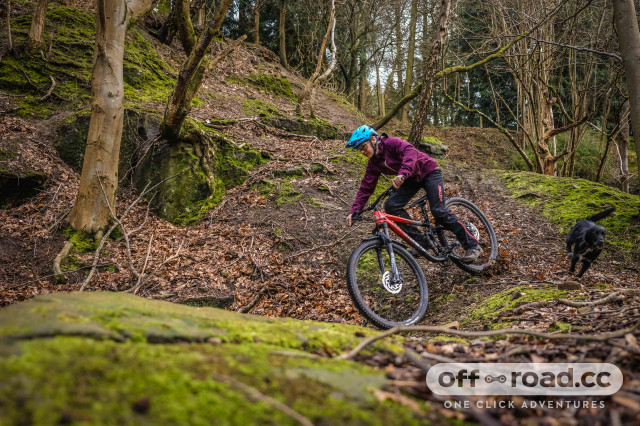 The Rift Zone's rivals often come in at much higher prices. The Hope HB 130, for example, has similar travel but costs over £6,000, whereas the most you can pay for a Rift Zone – in carbon – is £4,000. The Whyte S-120C R is close in terms of progressive geometry, but has a carbon frame, a slightly better spec and costs a little over £3,000.

The alloy-framed Rift Zone sits at a far more affordable level, right where desirable geometry and pricing meet. The inevitable casualty is, of course, weight.

As it is, the Rift Zone 2 is both attainable and highly upgradeable, and as such represents a good investment for those after a seriously capable short-travel 29er – so long as you don't mind spending a bit of time and money paring back the mass.

For the price, the Rift Zone frame is one of the best out there at the moment. This spec might not be ideal, but if you're just getting into mountain biking – or want a ‘do-it-all’ trail bike with plenty of scope for improvements – this full-suspension steed will do you proud.