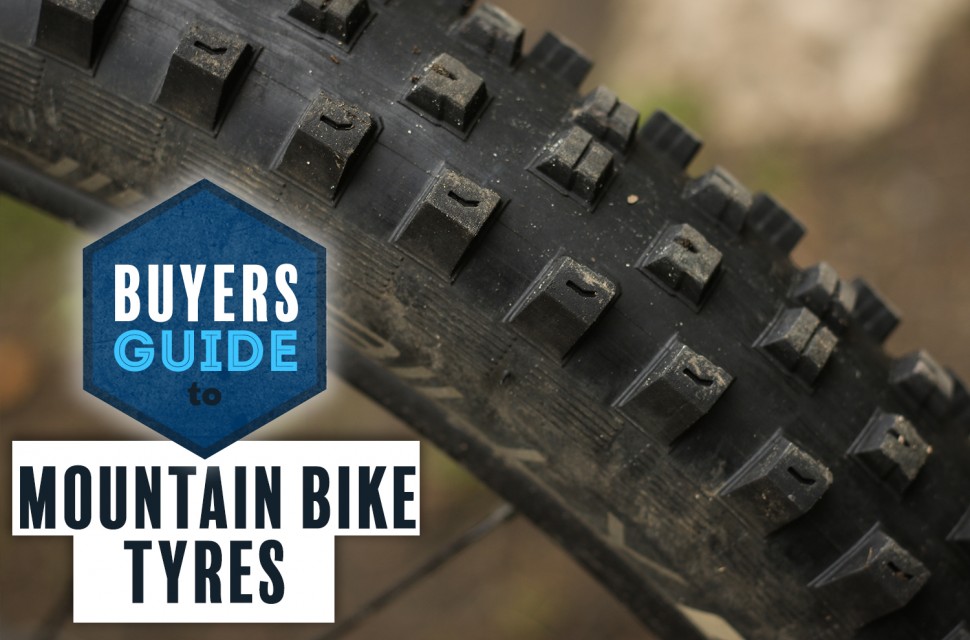 It’s easy to overlook the humble tyre in the search for performance, but the black circles you’re running on are probably the most important contact points on your bike. It’s the connection between your bike and the ground, so making sure you’ve got the right ones is vital and that’s what our buyer’s guide will help you do.

Obviously, the first thing you need to do is make sure that you’re getting the right size for your bike. That’s pretty easy to achieve as all tyres will have their diameter and width written on them. The diameter is the really important bit as that has to be exactly the same as the ones you’re replacing. You’ve got a bit more leeway on width, however, though it’s worth remembering that opting for wider tyres than the ones fitted will impact on your mud clearance and can end up rubbing on your frame or fork.

It’s easy to dismiss all tyres as being the same, but that’s very wide of the mark. There are three main factors in the construction of a tyre; the carcass, the compound and the tread pattern. We’ll explain what these are and how they affect the ride in detail below. 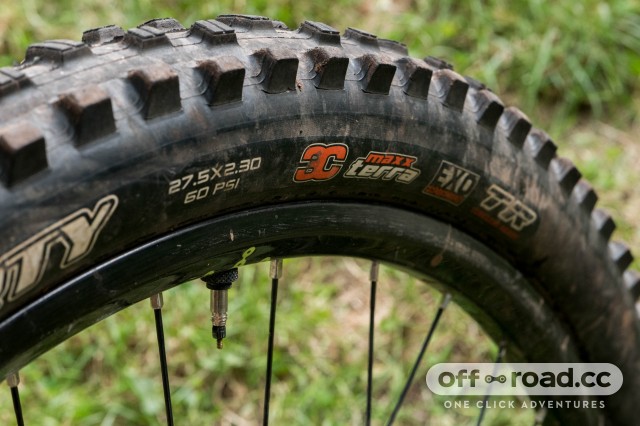 You can think of the tyre’s carcass as the skeleton of a tyre, as it’s what everything is built upon. The basic building blocks are the plies, which are threads of material, usually cotton, that’s impregnated with a small amount of rubber. How fine the strands of material are determine the durability and rolling resistance of the tyres. Measured in threads per inch, or TPI, a high thread count means thin fibres that easily conform to obstacles and reduce rolling resistance but are more susceptible to being cut or damage. A low TPI means thicker, more durable fibres at the expense of compliance (and therefore rolling resistance) and weight.

These sheets are layered on top of each other at an angle, wrapped around the bead of the tyre, which is what sits against the rim. Wire beads are used for cheaper tyres, while more expensive versions have kevlar beads, which are both lighter and more flexible.

For heavy duty tyres, it’s common to have two or more plies layered over each other to boost durability, which is why many downhill tyres are called ‘dual ply’. It’s also possible to boost the durability of tyres without affecting the weight so much by adding in extra layers of synthetic material in-between the plies. That can be on top of the tyre to help prevent objects penetrating it, or on the sidewalls to help reduce pinch punctures. A heavier duty and/or low TPI casing will often feel better damped when riding over roots or rocky, whereas a lightweight tyre can often give you the feeling of being pinballed about as it rebounds off obstacles.

It’s also possible to make the tyre’s carcass to completely airtight, allowing it to run without an inner tube as long as you have a compatible rim and valves. The original tubeless system was known as UST but it’s also common to see tyres marked as tubeless ready or tubeless compatible. The main difference between the two is that the latter needs to be run with a liquid sealant inside the tyre while a UST tyre and rim combination doesn’t need to, though they generally are anyway.

The big advantage of going tubeless is a generally reduced chance of punctures from pinch flats and thorns, especially when running sealant inside. That means that you can often drop tyre pressure to improve grip, though go too low and you can roll the tyre off the rim or damage it badly enough to make it lose air pressure. As you don’t need tubes, it’s also lighter, but you will need a full tubeless set up with some tubeless valves like the ones below. 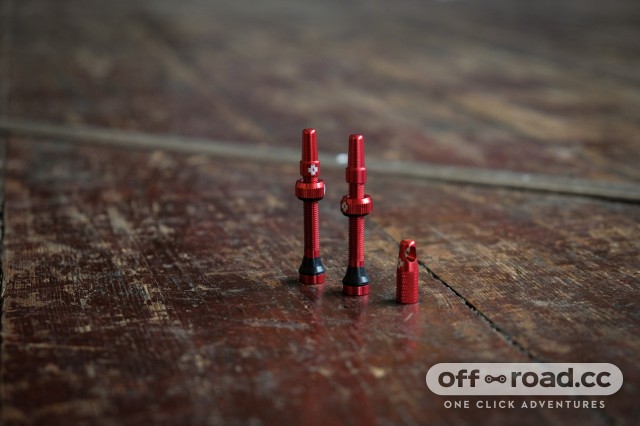 The rubber compound is the really magic element in a tyre. Two tyres can look exactly the same but if they use different rubber compounds they will handle in a radically different way. Generally speaking, the softer the rubber compound, the grippier the tyre will be, especially in the wet. The downside is that softer rubber is much less durable and will wear faster. A harder compound rubber will roll faster and last longer, but won’t offer the same levels of grip.

Rubber hardness is measured as a Shore rating. The lower the number, the softer the rubber. For example, a 40a rating would be extremely soft, while a 60a rating is hard. More tyres sit somewhere between these two extremes, but tyres often use a mixture of rubber compounds to try and balance grip, wear and rolling resistance. On multi-compound tyres, a softer rubber is usually used on the edge of the tyre for increased cornering grip, while a harder compound is used in the centre to reduce rolling resistance. This counters the drawbacks of using only one compound, but it’s inevitably more expensive to produce. 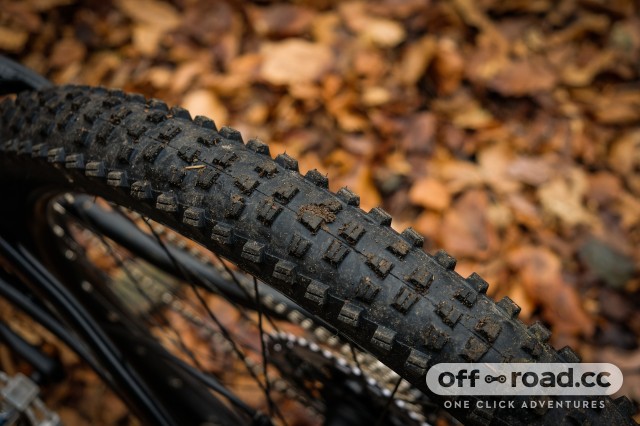 A tyre’s tread pattern is the ultimate visual clue to what it’s designed to do and what it’s likely to be good at. Tyres designed to work well in loose terrain will usually have a more prominent and spiky tread pattern to help claw down to grip. Those designed to work in dry, hard packed conditions with usually have a much lower profile tread pattern. In simple terms and all other things excluded, a higher profile tread with more prominent knobs will have a much greater rolling resistance than a low profile one because as the rubber of the tread compresses as you roll on it, it absorbs some energy. 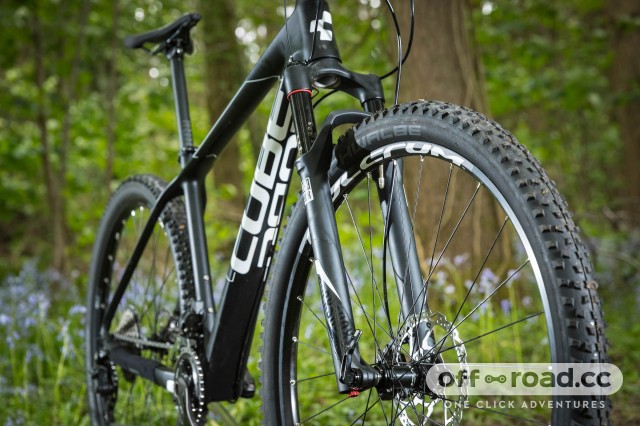 There are tyres designed to work in pretty much every condition and circumstance imaginable, with metal studded tyres for use in snow and ice, super fast rolling tyres with a tread pattern resembling a file for fast cross-country race use in the dry and everything in-between. The shape, profile and surface detailing of the tread all affect how the tyre will perform and which conditions and disciplines it will suit best. 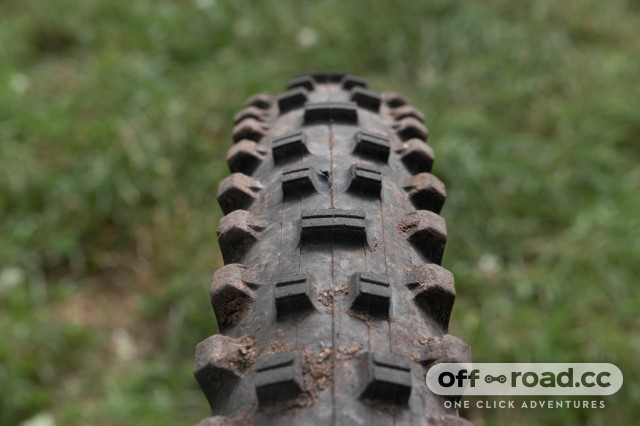 Mud tyres - or ‘spikes’ - are an important part of the UK rider’s arsenal during the long and sloppy winter months. They have tread with long, spiky knobbles that are designed to dig down to grip in soft ground. The tread tends to be widely spaced so that it clears mud quickly and doesn’t get clogged up. The downside of this is that those long spikes tend to bend about and deflect when used on a hard surface, making them sketchy and vague under braking or cornering. They’re also much more draggy when pedalling or rolling.

There are two schools of thought when it comes to how wide a mud tyre should be. Some say a narrow tyre helps dig down further and it also improves mud clearance in your fork and frame. On the flip side, a fatter tyre can often float on the top of mud and will also be much less likely to pinch flat when you do hit something hard, as well offering more cushioning in all conditions. Super narrow 1.5” mud tyres are now a thing of the past, but tyres from 2.1-2.3” wide are a good compromise for most riders.

Many manufacturers now offer an ‘intermediate’ mud spike to get around some of the downsides, using a less aggressive but widely spaced tread that’s often much lower profile in the centre to reduce rolling resistance. If you regularly ride wet and loose natural trails, these can be a good option for year round use if you don’t mind a bit more effort when pedalling. 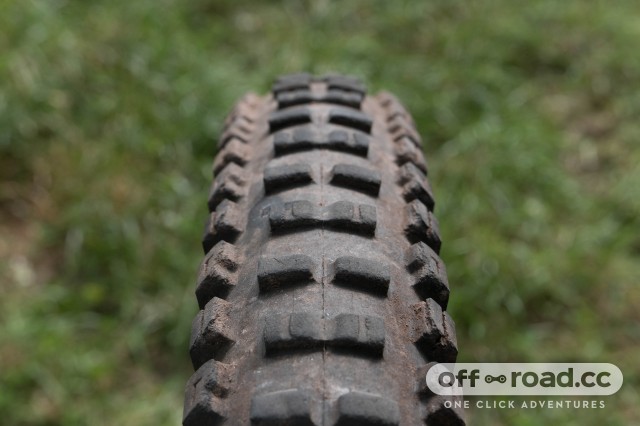 Designed to work in most conditions, there is a huge variety of trail tyre designs, some of which err towards a more aggressive tread pattern for better loose condition performance and some which have a low profile tread for lower rolling resistance. Which is best for you really comes down to what riding you like to do and where you choose to do it.

If you tend to stick to the well-surfaced, rocky and hardpacked routes common to many trail centres, a less aggressive, lower profile tread pattern is a very good choice as it’ll offer less resistance but good grip on those surfaces. If you tend to ride in natural conditions, going for a more prominent tread is a good idea as it’ll cope with mud and soft surfaces without sliding as much.

Either way, a tread pattern that is spaced more closely in the centre will roll much faster but you make find that braking performance in reduced in soft terrain. More prominent tread at the edge of the tyre will work well in loose corners but if it’s too widely spaced or tall it can squirm about and feel vague and unpredictable. 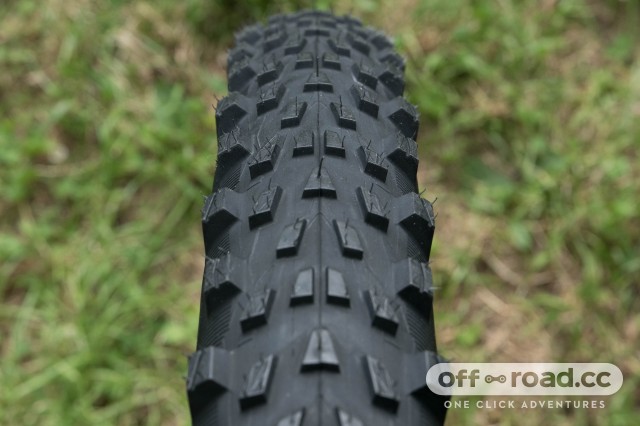 As the name suggests, these are tyres that perform best when it’s dry and the conditions aren’t muddy or overly loose, thanks to a low profile tread pattern all over the tyre. Most designs favour speed over outright grip, which is why they’re probably not the best choice for British trail riding. They do come into their own for cross-country riding and racing in dry conditions where speed and efficiency are of the essence.

If you want the speed of a summer tyre but with better cornering grip, a semi-slick is an excellent compromise, especially at the rear of the bike. Like the name suggests, the central tread of the tyre is low profile, but the edge tread is much more prominent and aggressive for better cornering.

It’s a mistake to think that you need to run your tyres as a matching pair. Mixing up your tyres can be a really good way to balance the various and often competing properties you need from your tyres.

Get the right balance of tyre tread pattern, carcass and compound on your front and rear tyres and it’s possible to get a setup that offers cornering grip without excess drag and will work in the vast majority of riding conditions, though some compromise always has to be made.

Thanks for this helpful guide. I can highly recommend the Vittoria Barzo for an all-round, all-season XC/Trail tyre. I like it so much I wrote a review about it on my site here: https://outbiking.co.uk/best-mtb-tyre/