Skip to main content
Log In Register
E*Thirteen TRS+ 27.5 x 2.35" tyre review £59.95
Square-profiled tyre that bites well off-camber but leaves something to be desired where climbing and braking grip are concerned 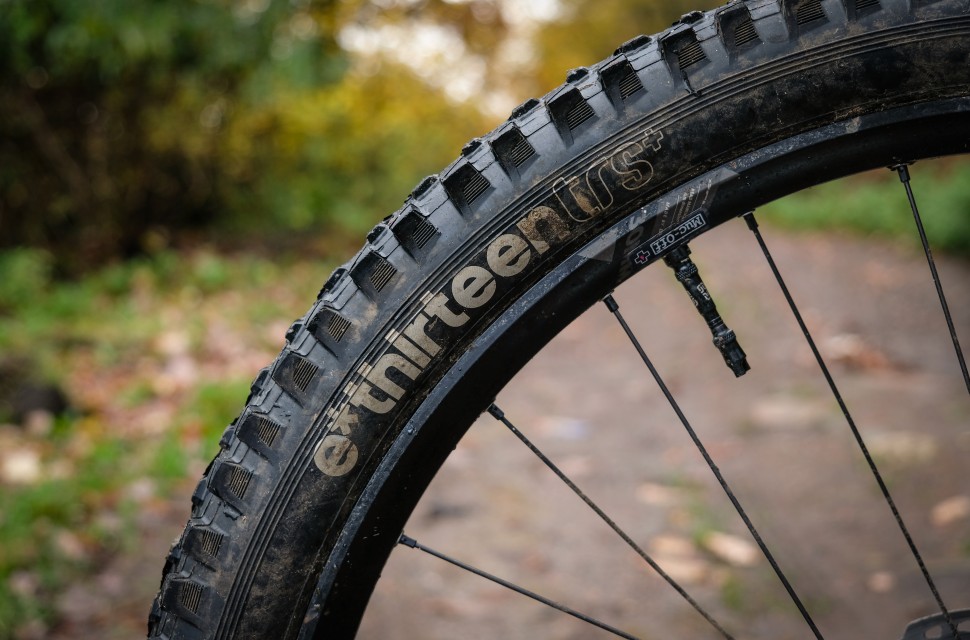 Rachael Wight
|
Nov 14 2018
|
Overall
Quality
Performance
Value
What's good?
What's not?
Buy if...
you are riding in the dry, mainly downhill and like a square tyre profile

The E*Thirteen 2.35" TRS+ tyre is an aggressive square-profiled mountain bike tyre that bites well into off-camber trails but leaves something to be desired where climbing and braking grip are concerned.

The single ply TRS tyres from E*Thirteen come in two flavours, the TRS+ (as tested) that features a dual compound (50a sides knobs and 61a centre knobs) plus the brands Apex inserts which they say improve grip under cornering and braking, decrease rolling resistance, and increase puncture resistance. These inserts are only placed in the side wall of the tyre, allowing the portion in contact with the ground to conform to the terrain whilst the inserts support the sidewalls.

The second version of the tyre is called the TRS Race, that features a much tackier compound for both the centre and side knobs (42a/40a respectively) and also an added a layer of woven Aramid reinforcement that is said to maximise air retention and better protect against sidewall cuts and punctures. 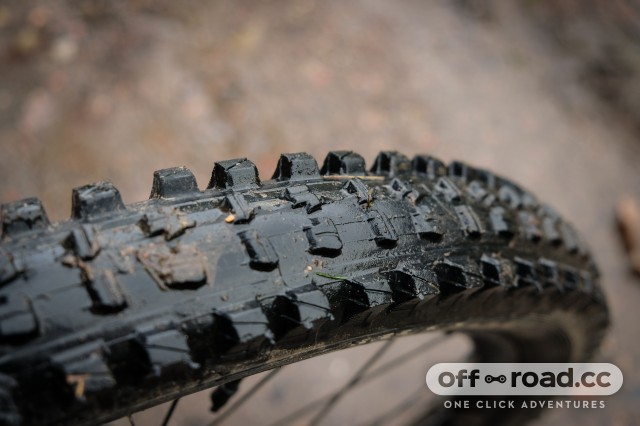 Seated on a 27.5" 30mm wide rim (DT Swiss M1900) the E*Thirteen tyres come up rather square. The outer knobs stand proud and with a quick glance at the tyre it appears to be super aggressive. Look closer though and whilst the side lugs are huge, the centre tread isn't the most aggressive I've ever seen.

Rolling resistance of the E*Thirteen TRS+ tyre is poor, especially placed on the rear as this tyre was. This is due to the square profile and the fact that a lot of rubber, most of the tyre profile, was in contact with the ground at any one time. Climbing traction is also poor, in the mud this is one of the worst tyres I've used on the rear of my bike, it doesn't bite into the mud and there is precious little grip which is downright frustrating and tiring in the mud. 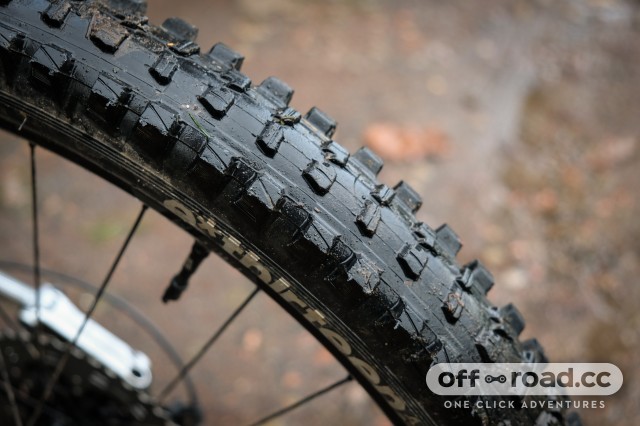 Turn the tyre downhill and whilst off-camber grip is good, the feeling in the wet is best described as vague and a little unpredictable. On the rear, as this TRS+ is best placed, the downhill braking traction is limited, the shallow centre knobs don't do much to slow the bike especially when the going turns soggy.

In the dry and on dry rocky terrain the grip on offer is more predictable and more plentiful, the off-camber grip is just as good but the tyres are still a little uncertain during cornering, there is potential to roll off of the upright side knobs. 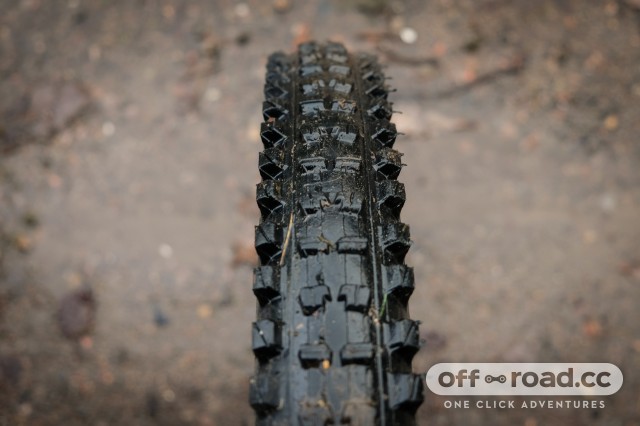 The tough carcass is supportive though and it's easy to stick with the low pressures I've become accustomed to running. It's worth noting I didn't puncture or burp the tyre during its test time and on removal, it was clear the sealant inside hadn't had to work too hard either.  I found it's best to run the TRS Race up front and the TRS+ on the rear at the same time, giving similar ride characteristics, with regards to the square edged profile and the different ride feel that provides where it's easy to run off the side of the tyre when cornering.

In short, there are better tyres out there for all-round, all mountain riding, the high rolling resistance of the TRS+ is hard to ignore on an enduro bike and the unpredictability and lack of grip are sure fire shortcomings in the wet. If you are riding in the dry, mainly downhill and like a square profile then these tough tyres will be a hit. For others, I might recommend you spend your hard earned on something that will roll faster and offer more traction in changeable conditions.