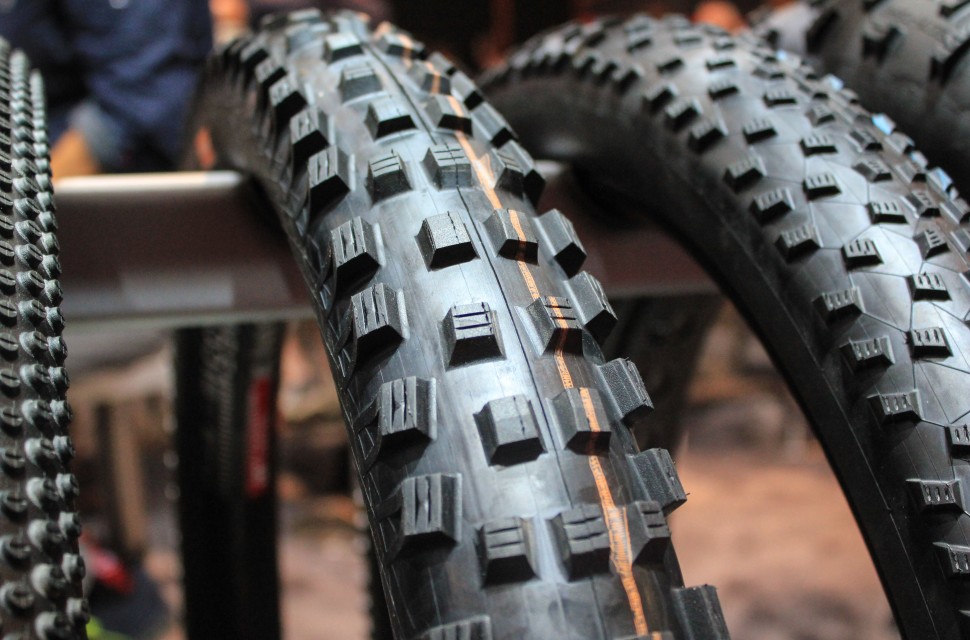 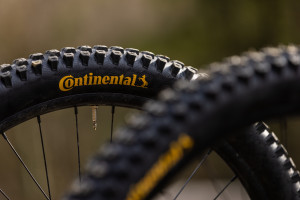 We are self-confessed tyre geeks here at off-road.cc, Maxxis, Scwalbe, Continental, we'll have them all! We're that type that are forever changing tyres to suit the conditions and then fervently agonise over said choices whilst preparing to ride. Our tyre geekiness is something we are getting help with (honestly) but in a momentary relapse at Eurobike this year we found ourselves trawling the halls in search of new rubber. Following our highly tuned noses, we indulged in some grippy, tacky, wide trail goodness and sought out the tyres we think will be rolling through the mud near you in 2018.

You can now find most tyres in two or more of the above compounds and a variety of casings (Evo, SupergGravity etc). Whilst tread pattern and tyre names don't change, some of our favourites can now be found in more voluminous forms. Wider is definitely better in 2018, something we agree with whole heartedly! 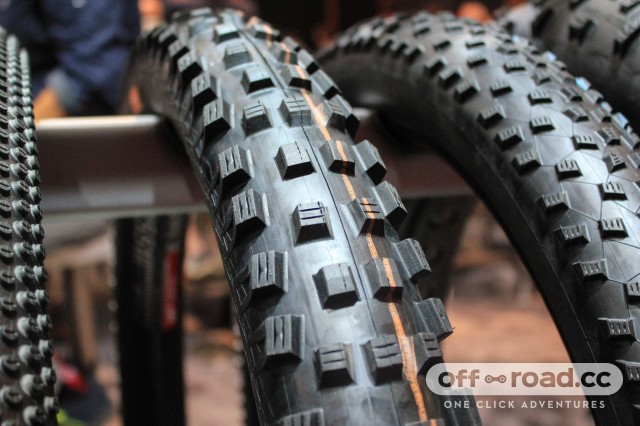 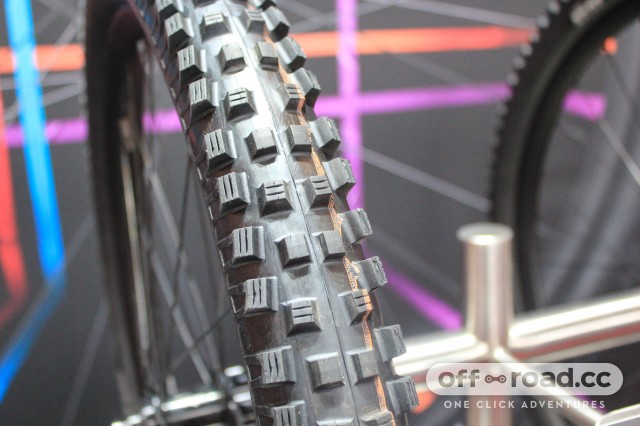 There will also be 2.6" Nobby Nics for 29er wheels available alongside the 27.5 x 2.25 / 2.35 /2.6 options that are already in production. Some of these will also be produced in a Classic-Skin (tan wall) version if that's your thing. Also joining the width game is the Rock Razor, which will also be sold as a 2.6" tyre too, in just what looks to be the Speedgrip compound at the moment. 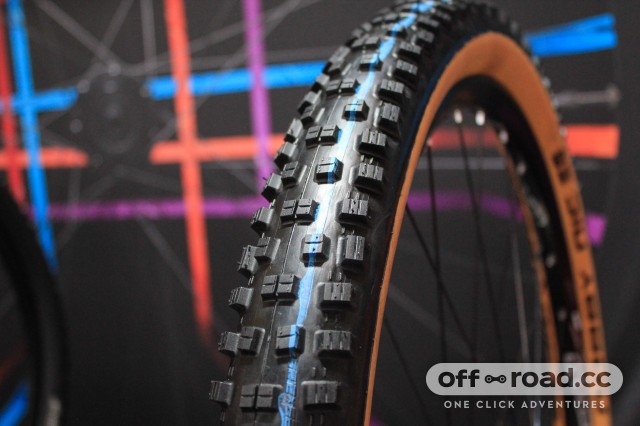 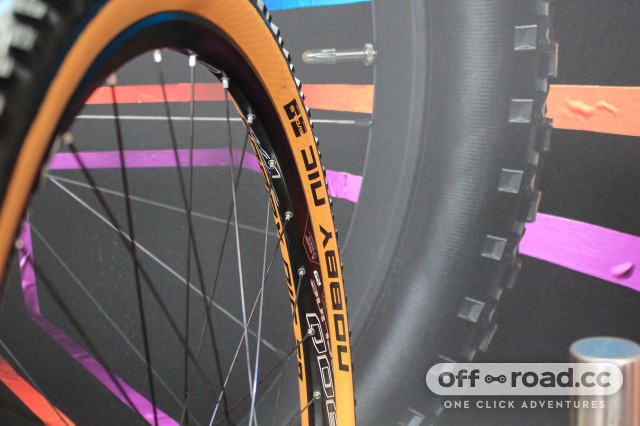 Lastly, Schwalbe had a brand new tyre on show, one for the gravel aficionado's out there, the G-One Bite. This tyre is an evolution of the G-One road / gravel line up with much more of a leaning to going off-road with a more open tread and raised side knobs. Size wise, this one is available as 27.5 x 2.1" and 28 x 1.5". 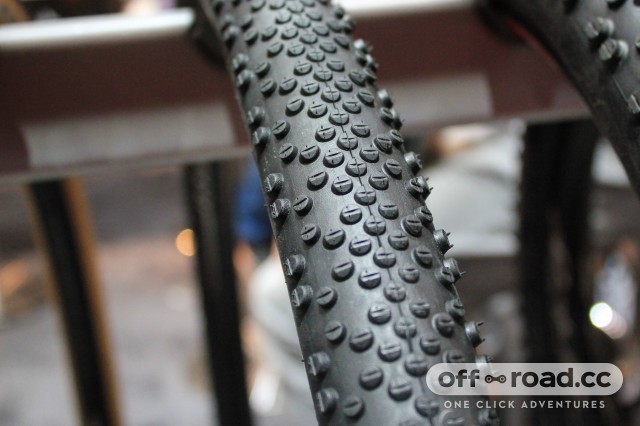 Maxxis had just about every tyre they sell on show at Eurobike with the predominant theme of "it now comes in Wide Trail". Wide Trail (WT) is an optimised the tread pattern design for today's wider rims. They are designed for a 35mm internal width rim but will work 10mm either side of this width too to prevent an overly square tyre profile. 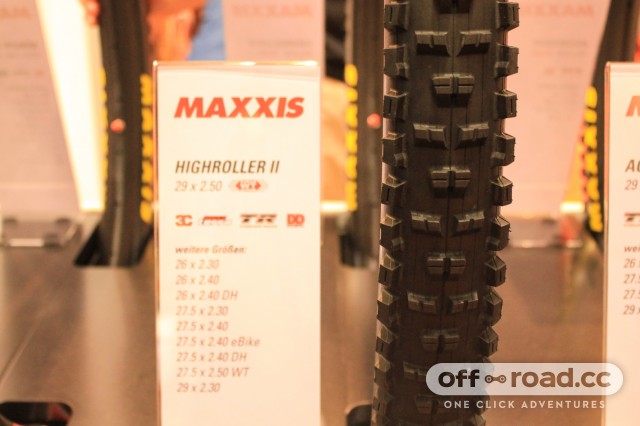 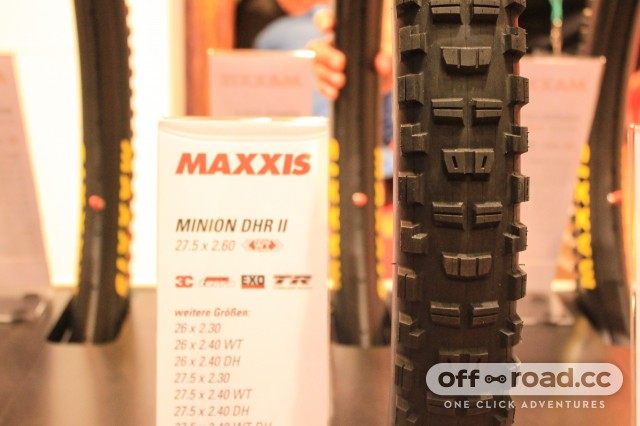 It's a similar story in the Shorty territory too with the mid-spike mud tyre available in up to 2.5" wide and in WT for both 27.5 and 29ers. 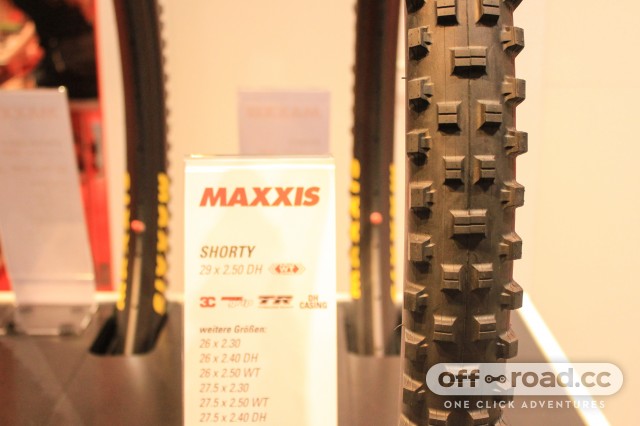 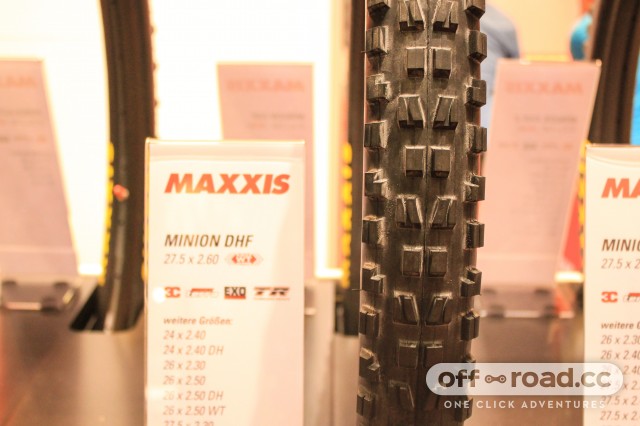 The Kenda tyres of interest were the Hellkat Pro, the Helldiver Pro and the Nevegal 2. The Hellkat Pro is a gravity orientated tyre available an ATC casing for enduro racing or the AGC casing which offers more protection. You will be ableo to choose between two compounds either the RSR, a dual layer compound for extra grip and control or EN-DTC compound for longer tread life. 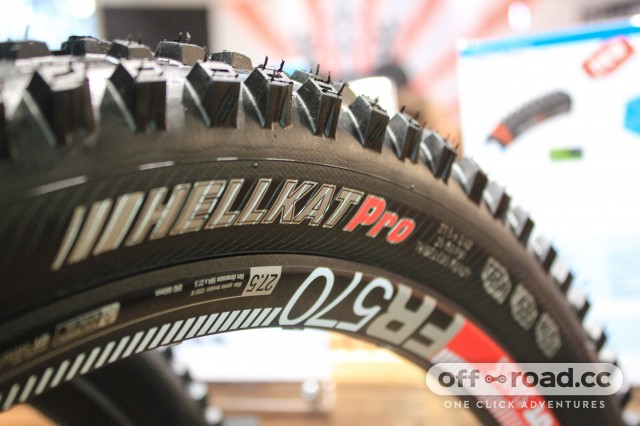 It's lighter than the DH version of the Hellkat released earlier this year and has, Kenda say, a tread design optimised for a wide range of conditions balancing traction, handling and rolling speed. At the moment you can just get this one in 27.5 x 2.4" but we hope more widths and sizes will be on the cards. 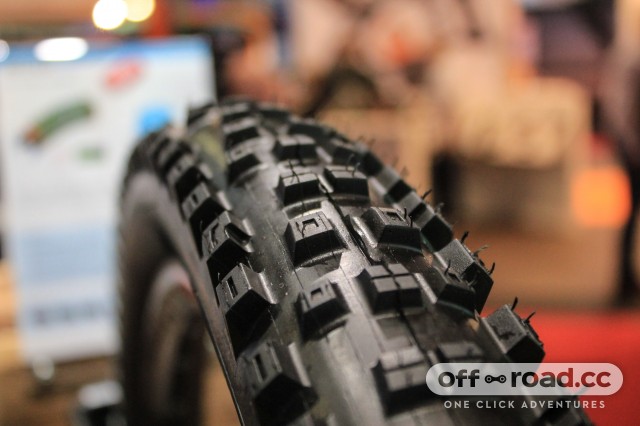 The Helldiver is the rear tyre that looks to be best paired with the Hellkat on drier days. This one is a fast rolling, lightweight gravity orientated tyre with a good balance between traction and rolling resistance, they say... It's got the same dual layer compound as the HellKat and like it's brother it will be available in just 27.5 x 2.4" at the moment. 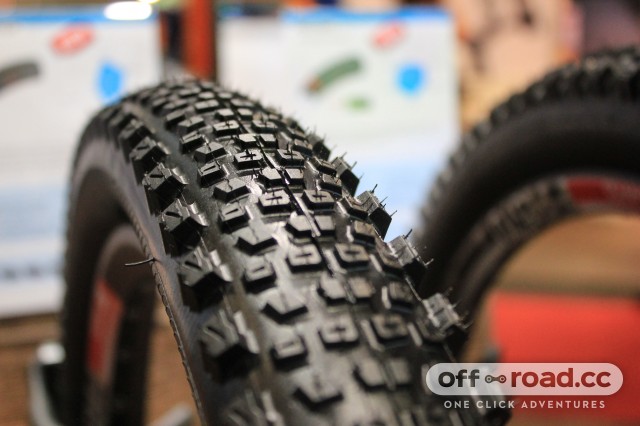 The Nevagal received a makeover this year, becoming the Nevegal 2, a tyre with better rolling resistance, ATC casing and the two compound choices, RSR or EN-DTC. The Nevegal will be available as 29 and 27.5 in both 2.6" and 2.4". 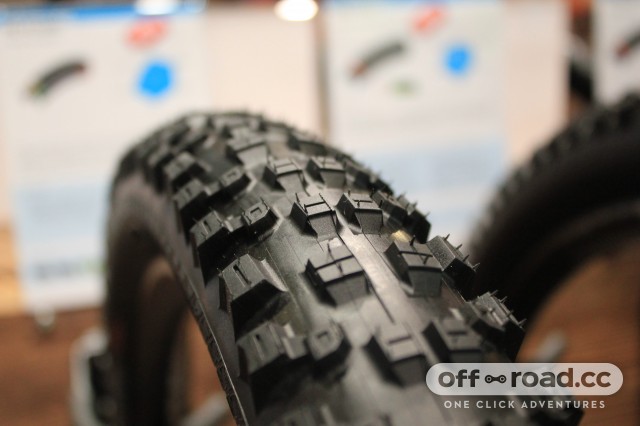 The new tyre over on the Panaracer stand was the GravelKing Mud, a tyre designed for the wettest, most atrocious conditions you can ride your gravel bike in. We've previously taken a look at the GravelKing SK, the tyre that the GravelKing Mud is based on. The new tyre offers with the same Anti-Flat casing and ZSG natural compound rubber seen on the GravelKing SK but with a tread pattern that has been designed to work in mud and slippery condition. Long blocks should provide the necessary traction and mud shedding abilities whilst still maintaining decent rolling speed. 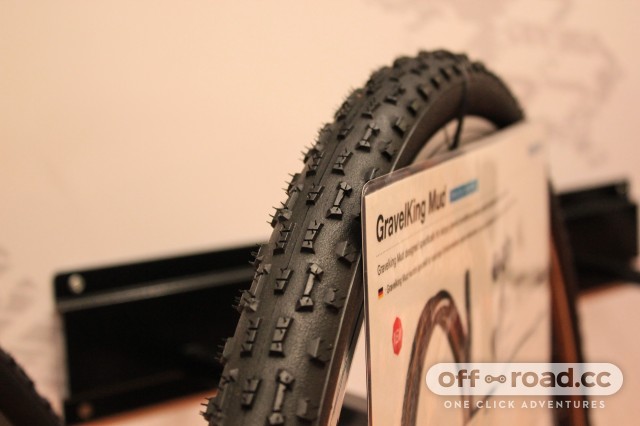 The new tyre comes in 33 and 35mm widths on 700c only and weighs 300g and 360g respectively. It’s a folding bead tyre but it’s not tubeless-ready. “The Mud version incorporates the same technology on top of a specially designed tread tailored to work best in muddy and sloppy conditions,” says Panaracer.

Continental kept things simple at Eurobike this year, presenting re-worked old favourites rather than releasing any new models. The Mountain King, Trail King and Baron Projekt are now available in new widths and with revised tread patterns. The widths across the range are now standardised so a 2.4" is a 2.4" whichever model of tyre you choose. 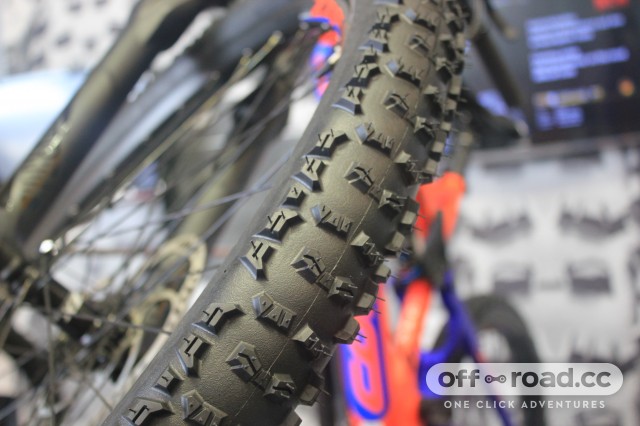 The TrailKing (above) gets more aggressive side lugs for 2018 and is deemed to be Continentals harder hitting trail tyre available in 2.2, 2.4 and 2.6” carcasses. 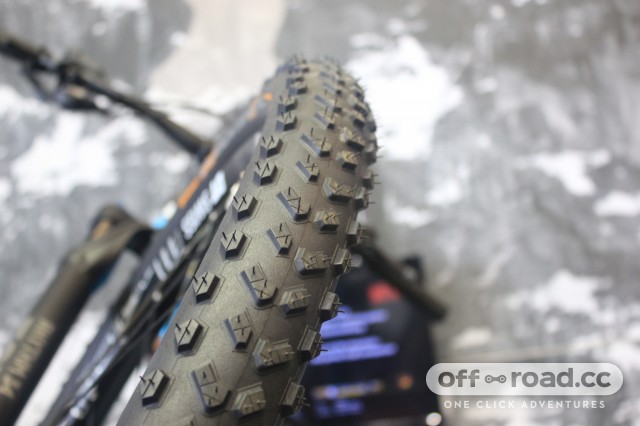 This MountainKing (above) also gets a re-worked tread pattern designed to make the tyre slightly faster rolling. This trail tyre is boosted width ways stepping up from 2.2" to 2.3". 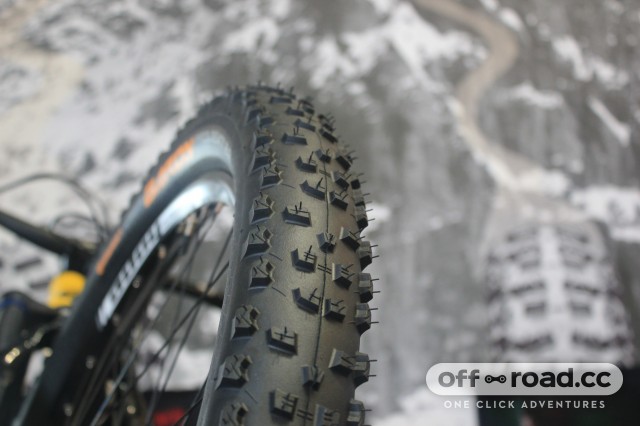 The Baron Projekt received an update to the width and tread pattern too, now available in 2.6" (pictured above). There will still also be a slightly different looking 2.4" version (below). 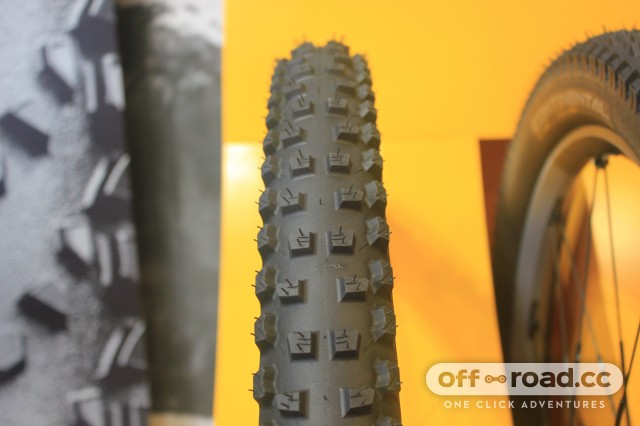 New in 2018 for WTB is another one for the gravel bike fans. Launched earlier in the year the Resolute is a 42c all-weather gravel tyre available in both 700 and 650B. 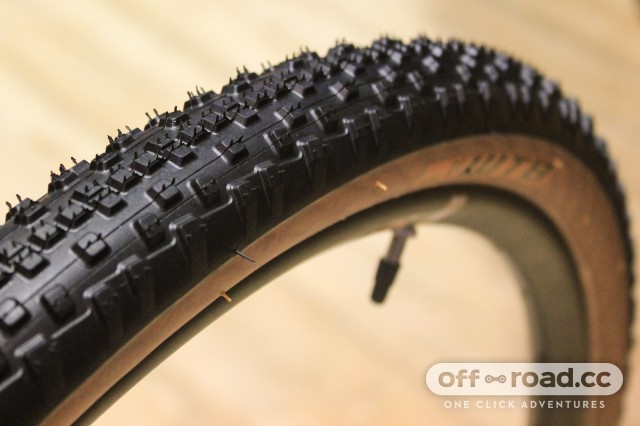 WTB says the small, square knobs deliver consistent bite into a variety of terrain whilst shedding dirt easily. They want it to be a set and forget gravel tire for all varieties of weather and activity. 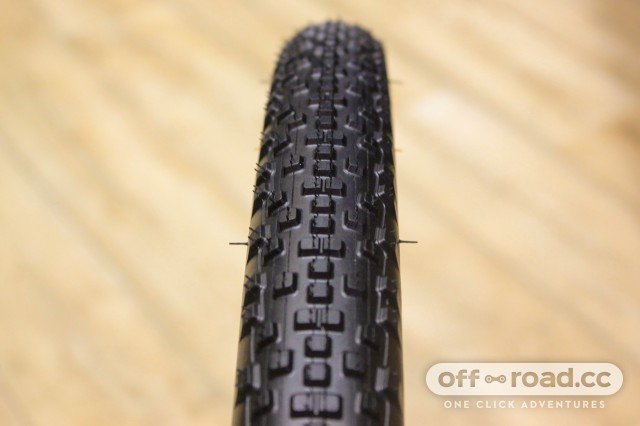