Skip to main content
Log In Register
Scott Stego Plus helmet review £150.00
One of the most comfortable trail hats out there but it's not without a niggle or two 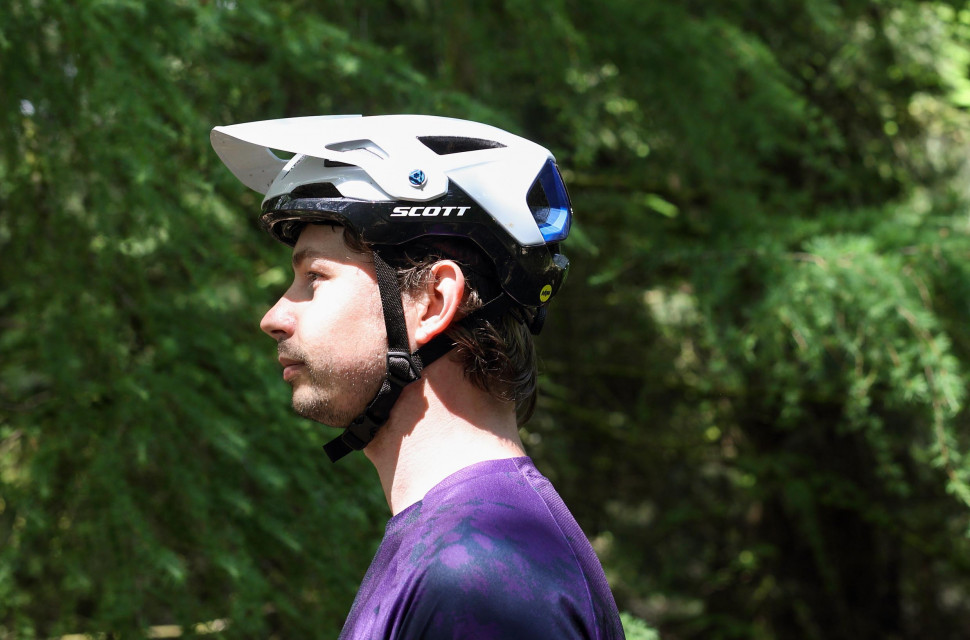 The Stego is Scott’s flagship mountain bike helmet that ticks almost all of the boxes of a solid trail lid. It’s breezy enough, it looks good, but above everything else, it’s supremely comfortable. Although, it would be good to see more adjustment from its visor, and its adjustment dial can catch on hoods.

The Stego Plus is designed with the enduro rider in mind. As such, it offers its protection from a polycarbonate Micro Shell that uses In-Mold Technology. But that’s not all because it comes with MIPS, something that’s to be expected at this price point. 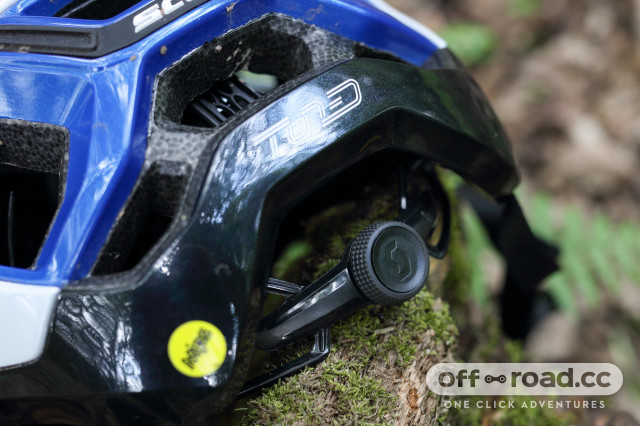 Along with that, this helmet gets Scott’s HALO 360 fit system with a rubberized dial, space for goggles under the visor with a rubber grip at the back of the helmet, and what Scott calls Optimised Ventilation with 17 vents. A second visor with a built-in GoPro mount comes in the box also, ideal for any vloggers out there.

The Stego’s weight isn’t too shabby, weighing in a 400g. It’s not the lightest of lids out there, but it’s not heavy enough to become uncomfortable during lengthier rides either.

It’s somewhat rare to find an utterly uncomfortable helmet, and there are many proper comfy hats out there, a favourite of mine being the Lazer Jackal. But out of all of the helmets I’ve had on test, the Stego Plus tops the lot. Granted, comfort and fit will vary from head to head, but I’ve not tested a helmet yet that fits my head so perfectly. There aren’t any pressure points or areas that don’t make contact with my noggin, and the padding is ideal too. 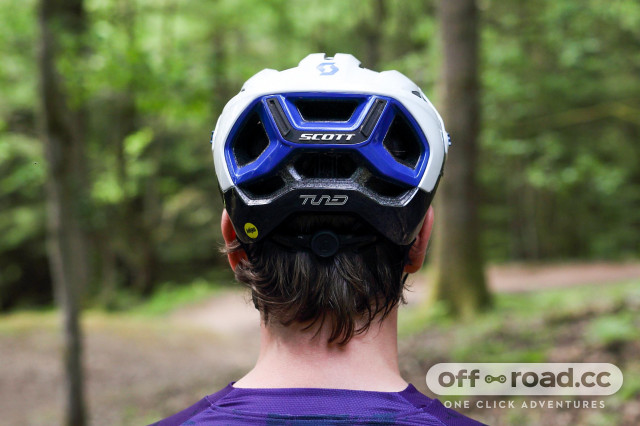 The HALO 360 fit system helps the comfort and fit. Adjustments are very fine, and that means that you’ll be able to find a comfy fit without having to compromise. Though, I’ve discovered the dial, although super ergonomic, to catch on the hood of my riding jacket. It’s not world-ending, but it’s an annoying obstacle as you’re trying to concentrate on the trail ahead. 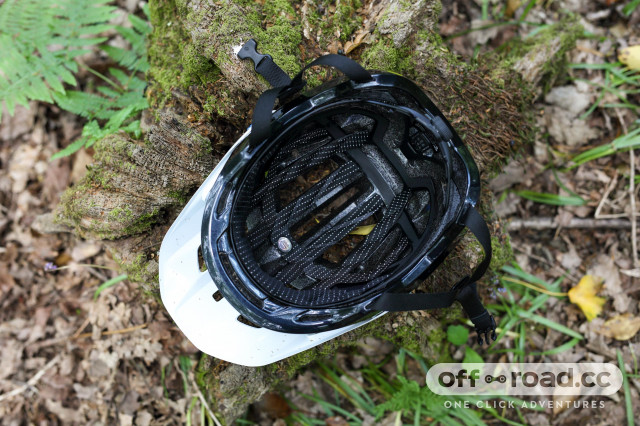 While we’re on the subject of comfort, the straps err more on the side of heavy-duty rather than comfortable. They’re thick, woven, and purposeful. They feel quite hard down the sides of the head and can encourage a bit of extra perspiration. This is where the Lazer Jackal’s light and soft straps prove superior in the comfort department.

The Stego Plus on test 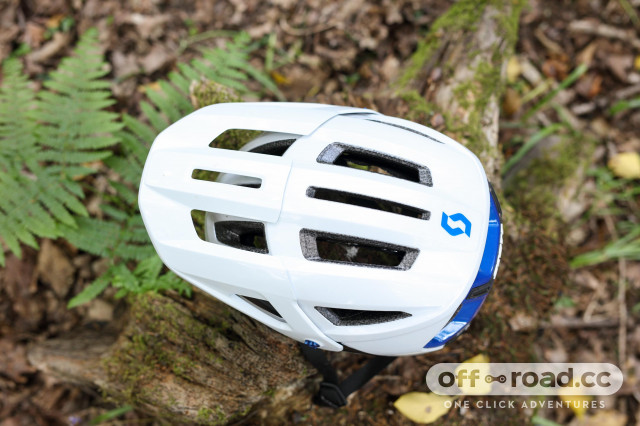 The Stego Plus was tested through some proper cool and soggy days, straight through to some mega toasty summer conditions. It’s not the breeziest that out there, but it’s certainly not bad at all. The 17 vents do an excellent job of guiding air over the head, and Scott has cleverly kitted the helmet with three vents at the brow, which direct air down to keep eyewear fog-free. As someone who swears by riding with glasses, any help to keep them from fogging is a very welcome feature.

For the most part, the Stego is a brilliant helmet, and you’ll be hard pushed to be disappointed with it should you purchase one, but it’s not all plain sailing. 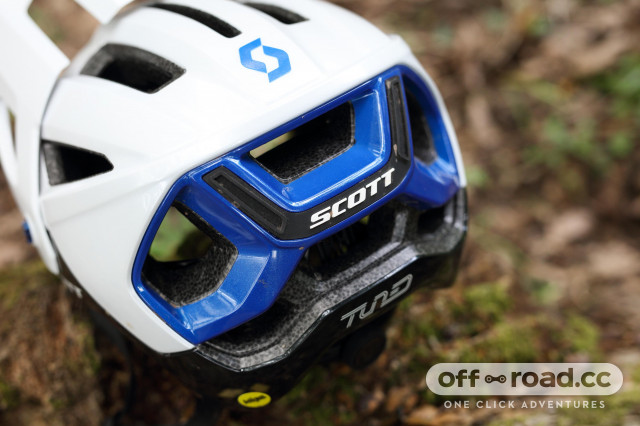 For starters, it would be great to see a bit more adjustment from the visor. In its default position, it’s well out of the way, and that’s great, but there’s no further adjustment to shield your eyes from the sun or incoming rain. Of course, there are then the straps and adjustment dial that I mentioned earlier. 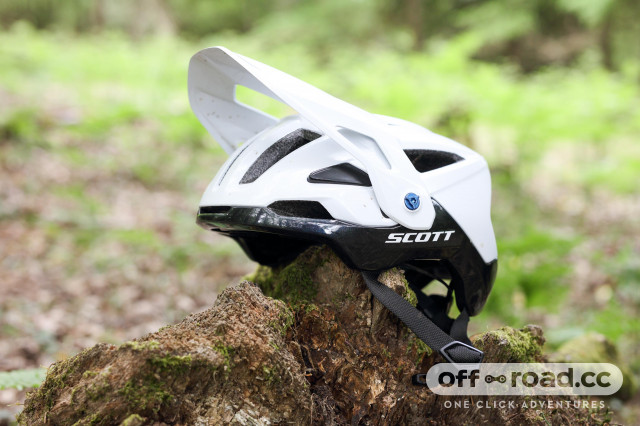 As for value, the Stego Plus sits at a pretty saturated price point, joining the Lazer Jackal and the Giro Montaro. The Montaro is 9g lighter, and the Lazer has those lovely soft straps, a couple of extra vents and sheds 4g over the Stego Plus. Though in the grand scheme of things, there isn’t an awful lot between them but for me, I’d say that the Stego Plus is the most comfortable.

Therefore, if comfort is top of your priority list, the Scott Stego Plus is a very solid choice. It’s then backed up with good ventilation, great integration with eyewear, and high-end, sporty styling. That’s if you can forgive the stiff straps and the adjustment dial that can hook your hood.