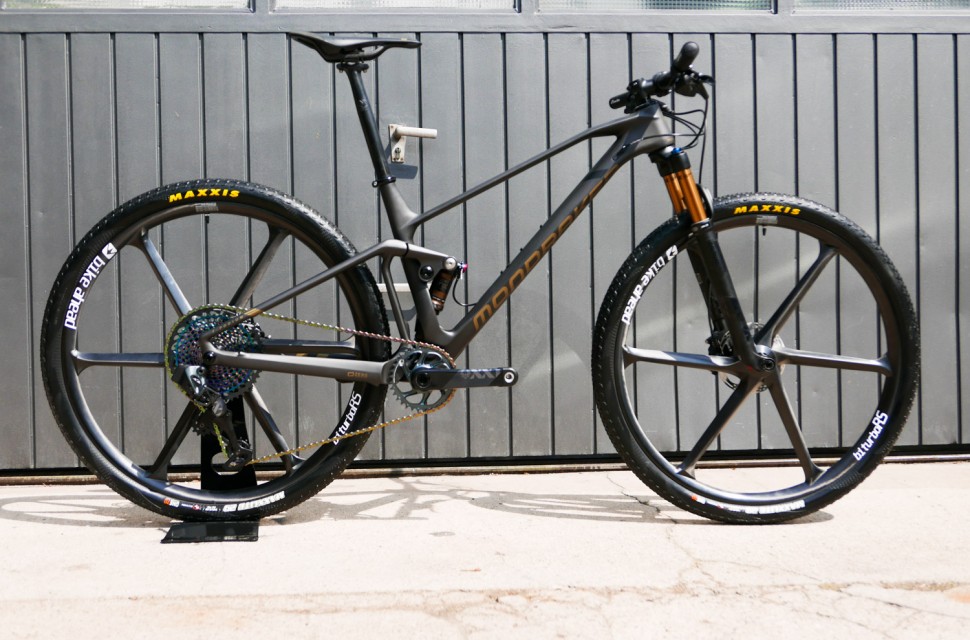 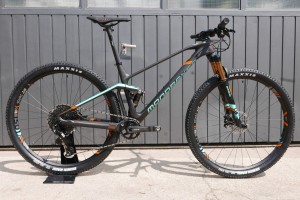 First Ride: Mondraker F-Podium R
A genre-bending cross-country racer, but can it cut the mustard?

Off Road Arrivals
We take a look at gear from Ion, Ride It, Mondraker and Columbia

It might be best known for trail and enduro bikes with progressive geometry and their very successful World Cup downhill team, but Mondraker is aiming its sights at the world of top-flight cross-country racing with the new, 100mm travel, full suspension 29er F-Podium range.

It might come as a surprise, but this is the very first-time Mondraker has made a full-suspension cross-country race bike. While the cross-country scene in the UK is pretty much overlooked in favour of trail and enduro riding, it's still booming in their native Europe and means there's a lot of potential for growth if they get it right - which means there's a lot riding on this bike.

The bike - as eagle-eyed followers of their UCI World Cup XC team will know - has been in development for a fair old time, with early prototypes having had their first public outing back in 2017 at the Nove Mesto round of the World Cup. It's actually been in development since 2015, which is when the team started benchmarking rival bikes and deciding how to tackle their own.

That meant some big decisions had to be made when it came to suspension design. Most modern full suspension XC race bikes use some kind of variation on a linkage driven single pivot design with flex stays as it's probably the lightest design to still offer acceptable suspension performance - more pivots mean more weight. 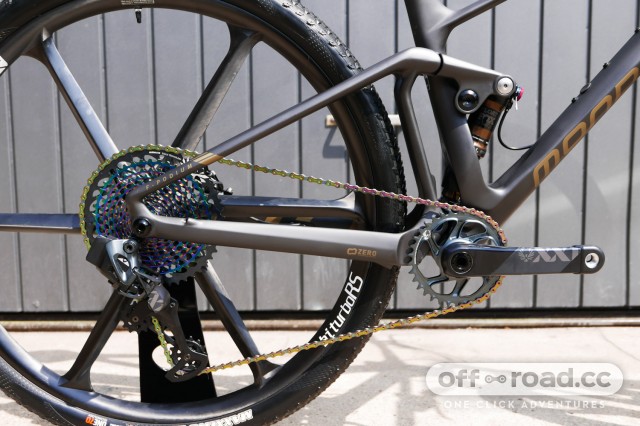 Despite knowing that it would come with a weight penalty, Mondraker opted to stick with their multi-link Zero system, as product manager Luis Martinez explains: "We thought that weight shouldn't be the only focus. The tracks [in World Cup XC] are now almost enduro tracks, so we focused on performance to make the rider faster."

Israel Romero, Mondraker's Product Marketing Manager and one of the brand's main test riders added: "We didn't want to lose our DNA. Going with our own geometry, we wanted to make our own suspension design; if we'd had single pivot it wouldn't have been a pure Mondraker".

The brand originally started working with a high-end automotive and aerospace carbon fibre manufacturer 3C in Germany, who wanted to use their work with Mondraker as a showcase for their abilities - the bike world is otherwise too small and too unprofitable to bother with.

Despite a learning curve for both parties, the early prototypes saw action under the Primaflor-Mondraker team in 2017, with a number of evolutions before a substantial redesign that made the bike much more aggressive in its geometry as well as a move to Mondraker's usual Taiwanese production partner. 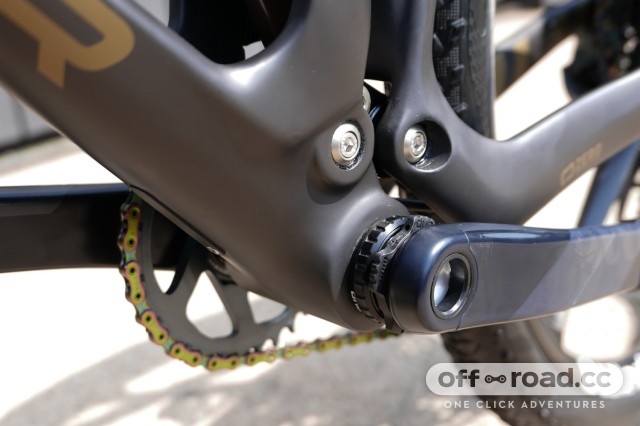 This new bike had a much steeper seat angle, more reach, a slacker head angle and also dropped the integrated stem to save around 70-80g of weight, which was then reinvested in using a much more reliable threaded bottom bracket, rather than the lighter but temperamental press fit design. A standard stem also meant a much greater range of possible bike fits, important for riders who don't only want a slammed front end.

The bike also had a beefed up rear end, with a trunnion mount shock and larger diameter pivot axles amongst layup changes to offer sensitive suspension that was also laterally stiff enough for racers. A few suspension tweaks later, following testing from team riders as well as long term testing under aggressive riders, and the F-Podium was finalised towards the end of 2018.

Geometry and suspension that stands apart from rivals 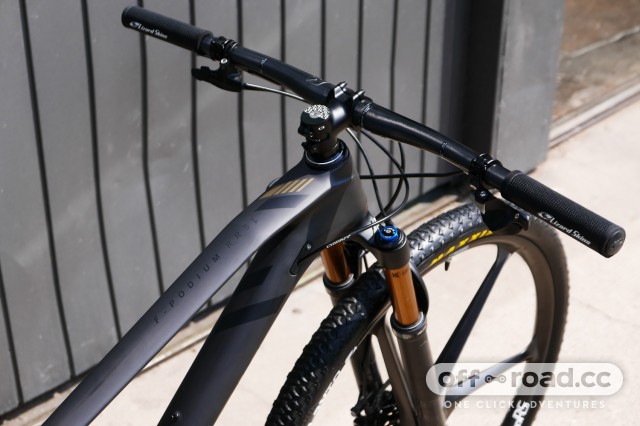 The F-Podium conforms to many cross-country race bike norms on the surface, with 100mm of travel at either end, 29" wheels with clearance for up to 2.4" tyres - or lots of mud and skinnier rubber - in the rear, Boost hub spacing and a single-ring specific setup, plus the ability to run Fox's Live Valve automatic suspension system should you wish to, though none of the complete bikes come with it.

It's the suspension and geometry that set the bike apart, as Israel explains: "Cross-country bikes have been using the same geometry for so long and we wanted to make something different and special."

"We looked at all the others and made something with a longer top tube and reach; pretty different angles compared to other bikes in the market. it's got a super steep seat angle for a cross country bike. Even compared to our own Podium hardtail, it's three to four degrees steeper - you need a really steep seat angle to make the best of your effort on a full suspension bike 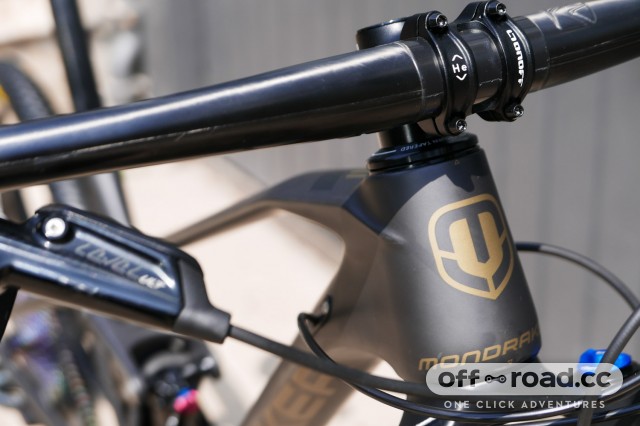 "It's also two full degrees slackers in head angle than our Podium hardtail; it's what makes the difference with the geometry as a whole, we feel it offers better performance when racing or riding"

That means the bike sports a pretty progressive set of figures, with a reach of 460mm for a medium matches many brand's large sized enduro bikes and is just 10mm shorter than the same size of Foxy 29 trail bike. The 68° head angle is also pretty relaxed by the standards of the category, used in conjunction with a short 44mm offset fork and a 50mm stem (small and medium bikes) paired with 760mm wide bars, plus the 76.5° effective seat angle gets the rider forwards on the climbs.

It's not all enduro madness, however, with a tiny 90mm head tube for the medium that allows a hyper-aggressive position and a pretty low 325mm bottom bracket plus 432mm stays. 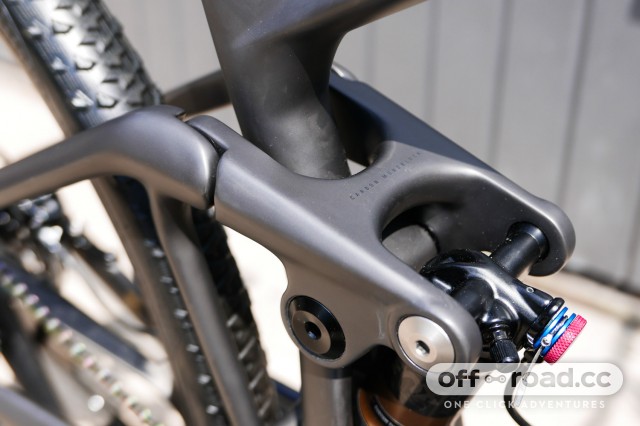 When it comes to suspension, the Mondraker team knows that breaking traditional cross-country racer's opinions on suspension might be tricky; most riders tend to ride with the suspension locked out most of the time and will generally run it as stiff as possible regardless.

Mondraker CEO Miguel says: "All riders try to run too much pressure in the suspension to try and avoid the movement of the rear shock but that's what they're used to with a single pivot system, and they've not taken the opportunity to ride with a performance suspension system."

Luis adds: "It was hard to train them [the team] to pedal without the lockout, they use it 90% of the race and it's hard to try to get them to run it open. When they did, they found it even helps with climbing as well as rough terrain and this was good feedback for us."

That said, all bikes in the range come with dual remote lockouts as standard.

Of course, all a lot of riders will care about is weight and while they admit that their bike isn't the lightest, it's still not that lardy, with a medium frameset weighing a claimed 1,987g and complete bikes ranging from 9.52kg to 11.49kg.

All bikes in the range use the same full carbon fibre frameset and all come with a Fox 32 Stepcast fork and DPS shock with a remote-mount lever on the bar, plus 2.2" rubber. 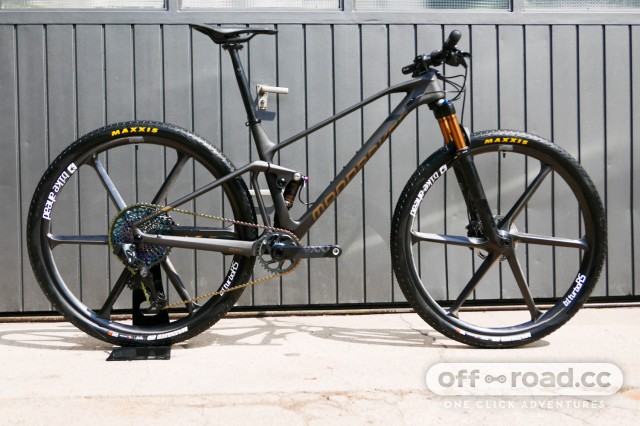 The range topper is the really rather outrageous RR SL, of which only 100 examples will be made. The headline weight of 9.52kg for the full bike is achieved by some pretty top end kit, with a full SRAM AXS wireless drivetrain, Fox Factory 32 Stepcast fork and DPS shock managing to be fairly humdrum items compared to the BikeAhead AC29 Biturbo RS carbon spoked wheelset and lethal looking 2.25" Maxxis Rekon Race Exo tyres. 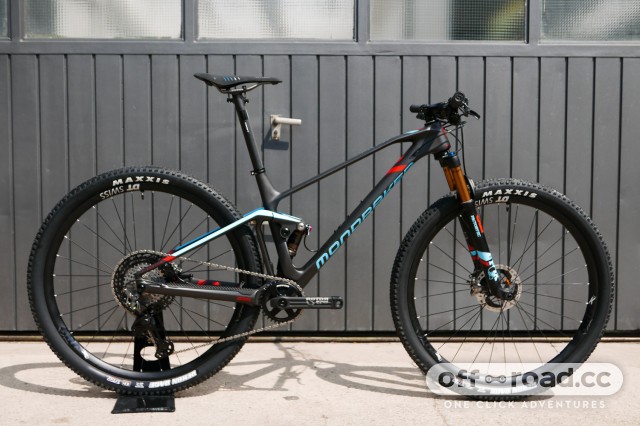 This is the bike that Mondraker's team will be racing on and as such it's a bit more realistic, with a conventional carbon rimmed DT Swiss XRC1200 Spline One wheelset and rubber that you could reasonably expect to ride and survive off-road. Shimano's M9100 12-speed group provides the gearing and brakes and there's a Rotor INpower crank with power meter as standard, all building to a claimed 10.2kg weight.

UK prices are TBC but the bike will be available from June 2019. 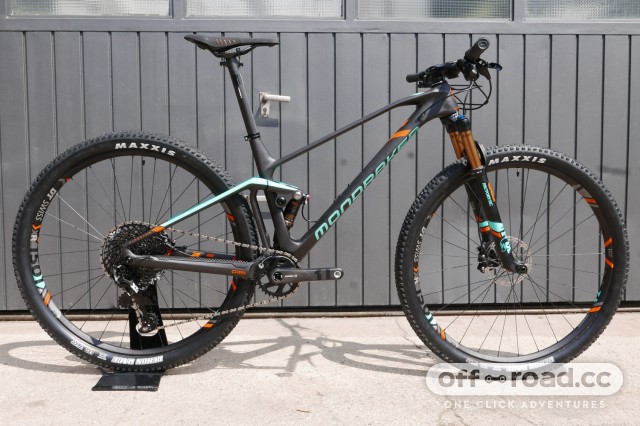 This bike shares the same Fox Factory suspension as the bikes above it but the drivetrain is a mix of SRAM's X01, X1 and GX Eagle groups, with an aluminium rimmed DT Swiss XR1501 Spline One wheelset for a 10.6kg claimed weight. 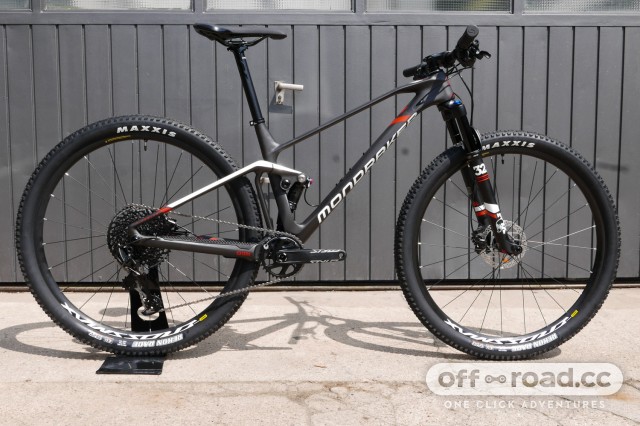 The entry bike to the range shifts from the golden Kashima coated Fox Factory suspension to Performance Elite units, with the fork using the Grip damper. The drivetrain is a SRAM GX/NX Eagle mix with Shimano's non-series MT501 brakes and Mavic Crossmax Tubeless Boost wheelset.

We took the F-Podium R out for a spin in the woods around Stuttgart prior to the Albstadt XC World Cup, so check back for our First Ride soon or take a look at the video at the start of the article!