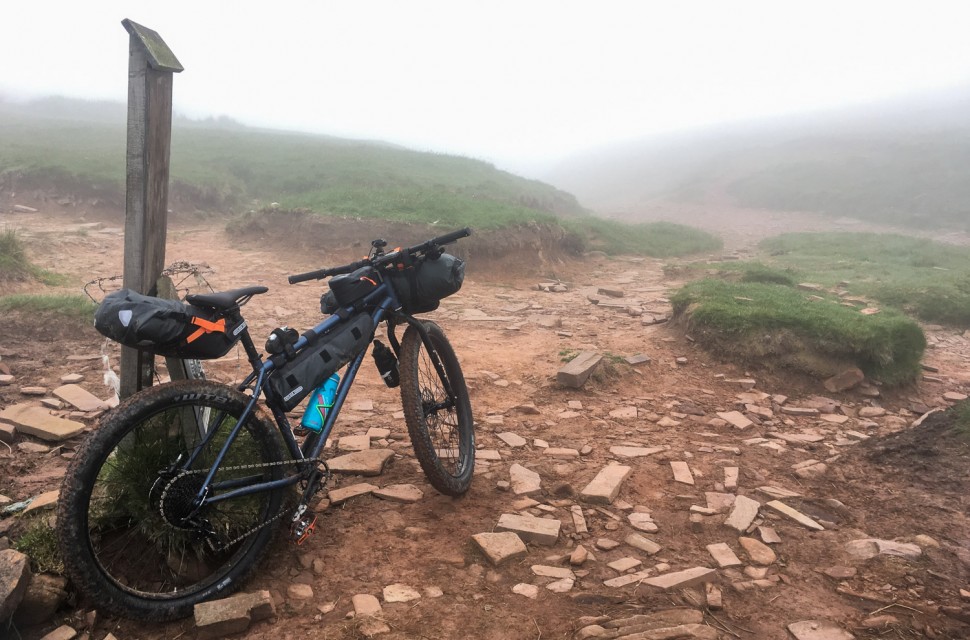 Is it possible to spend a night out in the mountains, have a decent ride and still get back in time for work the next day? That's what I aimed to find out, by trying to squeeze as much of a bike adventure as I could into as small an amount of time as possible in a micro-bike-mountain-adventure!

Finding the time to do a proper bikepacking trip can always seem tricky, but it doesn't need to be that way. While multi-day epics are all well and good for thickly bearded explorer tyres, for most people life tends to get in the way, with responsibilities such as going to work and not using up all your time-away credits with family, spouse, children or animals taking priority over messing about on your bike and sleeping in the woods.

Bikepacking overnight and back in time for work?, by Jon Woodhouse

However, what if you could use up some of the time that you might spend lazing about on a sofa listening to the soothing voice of David Attenborough or somesuch before going to bed, that might make more sense. Simply disappearing for an evening is certainly easier to do than taking a full day or two out and requires a lot less life-logistics - it's the way of the microadventure!

With all that in mind, my plan was to leave my house in Bristol around 8pm on Sunday evening, then head over to Talybont in the Brecon Beacons, the start of the classic Gap mountain bike route. At about 38km long, it's a decent day ride with a fair amount of climbing, but the main attraction was that the halfway point was just below the summit of Pen-y-Fan, the tallest bit of hill in South Wales. Waking up as the highest person in Powys and with a descent waiting for breakfast would be pretty cool. Then, after overnighting on the mountain, I'd swoop down back into Talybont before most people had had their breakfast, hop back in the car and get back to the office in time to drink pints and pints of coffee. A simple plan, and one that would be hard to mess up.

However, I began messing it up fairly soon - with around five minutes before I (and sunset) arrived in Talybont, I had a strong sensation that all was not right. While I'd bolted my light to the bars, what about the battery? The battery that had been left to charge? Where was that? A quick rummage through my kit bag gave me the answer - it was still charging. In Bristol. I'd come too far to turn around, so there was nothing for it but committing - luckily it was a warm and relatively cloudless night and the route was entirely offroad for the first 10km or so - plus I had a small head torch as a camping backup.

With bike and kit assembled, GPS fired up and bleeping away merrily, I passed the rather inviting, brightly lit pubs of Talybont and began heading upwards. Happily, the path was pretty wide and fairly smooth, so my rigid Bombtrack Beyond+ merrily monster-trucked it's 2.8" tyres merrily upwards as bats swooped overhead and even the extra heft of all my overnight kit didn't make the whole experience too unpleasant. As the trees began to thin out, I could see the Taylbont reservoir reflecting a the last moody orange bits of sky back at me. Seeing the distant lights begin to fall away, I felt rather smug that I was out on my bike when usually I'd be dithering about before bed.

Around 7km in, I came to the rather spectacular looming saddle of Darren Fawr and despite not being anywhere near as far in as I'd wanted to be, it looked like a good place to bed down for the night, with a nice grassy section sat atop a tump that looked like it'd offer some pretty special views come morning. I began chucking out my sleeping kit and once that was set up, it was time for a nice hot drink and a snack.

Foraging for your supper

Like an urban Ray Mears, I make a point of scavenging any useful foodstuffs where and when I can - and hotels make for rich pickings if you're after single-serving items. This approach regularly nets me hot chocolate, coffee, teabags and biscuits of every variety, all packaged up to survive the rigours of bikepacking. It was a delicious hot chocolate from the delightful Ty Morgans in Rhayder that would do the job tonight. I'd also carefully foraged for a scotch egg, this time from a service station on the drive up. You are what you eat, after all - and I am nothing if not an egg surrounded by breaded meat of unknown origin.

Thanks to a decent bivvy spot along with pleasant and mild weather, I had one of the better nights in a bag under the stars that I've had. That meant around 4-5 hours of fitful sleep, occasionally interrupted by a sheep with a cough (yes, they cough, a lot) that can best be described as pretentious. However, at least I had slept and I was warm and dry - and I'd awoken at the crack of dawn to a pretty damn special view, with valleys falling away all around me and distant peaks looming out of early morning cloud.

A room with a view 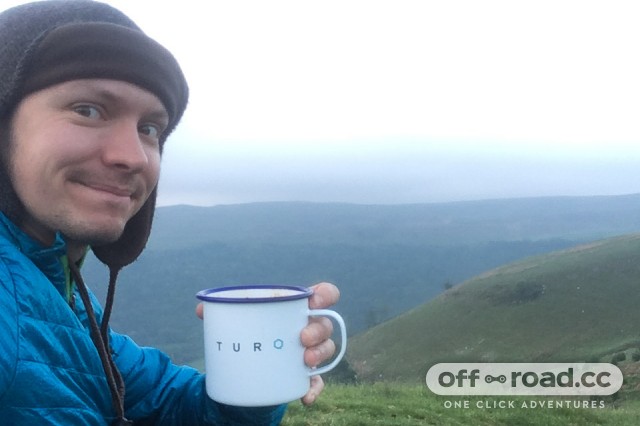 From the cosy comfort of my bag, I fired up the stove to make some porridge and a cup of tea, which in turn fired up enough enthusiasm to extract myself into the rather nippy early morning air. After packing up everything - which always takes much, much longer than you expect - I once again fired up the Wahoo Elemnt GPS and began following the dotted line.

A small climb led to a fast but lumpy and rocky descent that shook me awake quite thoroughly, before hitting the road and my first (and only) bit of civilisation for the day, Dolygaer Outdoors Centre. This was lucky, as I'd run out of water already - always take much, much more than you think you'll need, kids - and really needed to top up. Though the place looked completely dead, I did spot an outdoor tap on one building and decided to fill up there - I'm pretty sure they wouldn't have begrudged me it had I been able to ask.

After that started a pretty long road based schlep through Taf Fechan forest and then heading offroad past Neuadd Reservoirs and then on to the highest point of the route at Craig Cwm Cynwyn. I also passed my first other human of the day, an older gent on a road bike stoically cranking his way up the climb to the res, exchanging a good morning before I headed up the bridleway and he turned back down the road, I assume having completed his morning cycling ritual. 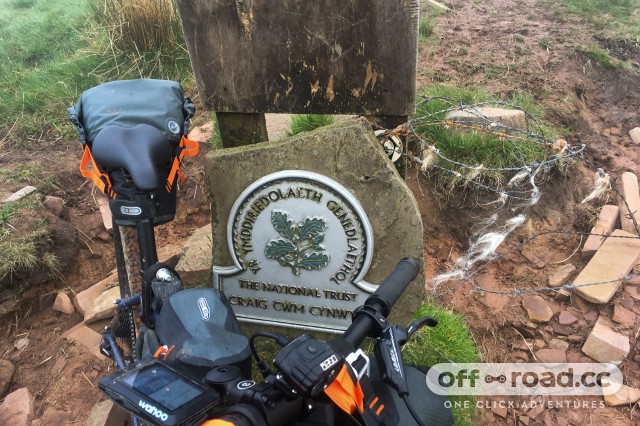 As a cranked up towards the mist-covered flanks of Pen-y-Fan, I was feeling quite pleased with myself, having done a decent amount of distance before I'd even have usually woken up. It felt all very zesty and life-affirming as I disappeared into the mountain mist. Though the expected views were hidden by cloud at the top, I was looking forward to descending, as most of the ride had been uphill to this point and my porridge breakfast was starting to run out. 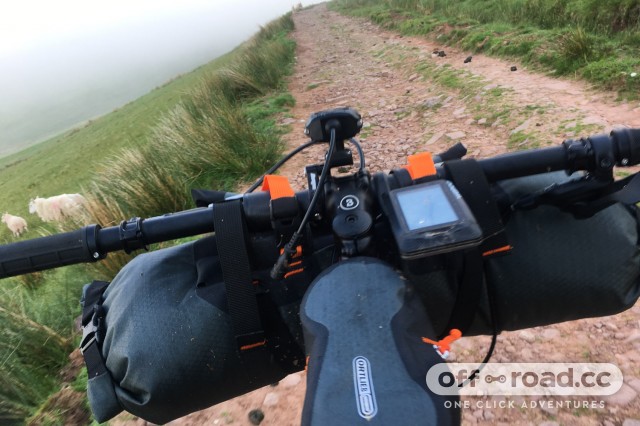 Fantasies of a fry up starting to circle in my head, I began descending the intensely lumpy and loose rock trail, which was surprisingly hard going. It's here that I definitely missed some suspension and with the Plus tyres pumped up way too hard in order to fend off punctures with a heavily laden bike, it was a pretty brutal descent, punctuated by mild bouts of swearing and general exclamation. However, as I got lower down, the trail started to be more grassy and speeds picked up, as did the views.

Coming further down in elevation, the treeless terrain started to become more lush and green and the trail turned to gently winding single and double track. As I hit a road section and passed through small villages, I couldn't help feeling a sense of achievement that I'd turned a dull Sunday evening into a small-scale adventure and - if I kept the pace up - I might even make it in to work on time. Or sort of on time.

As the route now interspersed grassy flat bridleways through field occasionally full of curious cows with road and canal tow path, it was obvious that my little adventure was coming to an end. Even so it was a surprise when I passed the village sign for Talybont and found myself back exactly where I'd started - parked at the rather cute and extremely cyclist-friendly village hall.

So, did I make it back for work? Not exactly - my body had refused to do anything until I'd inhaled a fried breakfast and many mugs of tea and coffee at the village cafe - but if I hadn't stopped for that, I'd have been in with a shout of making it back for teh start of a working day. With better planning, a bit more haste and a touch less faff, I'm sure it'd be easy for anyone to do.

Anyway, as I hit the last vestiges of rush hour traffic coming into Bristol from the motorway, it all felt rather magical to know that my bed for the previous evening had been a grassy spot lightly covered in dry sheep shit and that I'd sweated my way up a mountain before I usually pull my socks on. If you don't find some sort of romance in that, then I don't know what's wrong with you. Of course, by mid-afternoon I was cross-eyed with tiredness in a way that mainlining coffee simply couldn't help and utterly useless to my employer but let's gloss over that shall we?

Microadventures: you should go and have one.

I've slowly amassed bits and bobs to do a short overnight bike packing trip the last few months and even have some spots within short-ish distance from here but my main reservation for having not planned a trip already has been..... What do people do on solo trips to pass the time?

This looks fab - do you have a link for the route you took?

Don't worry - just realised it's linked in the article *facepalm*

This looks fab - do you have a link for the route you took?