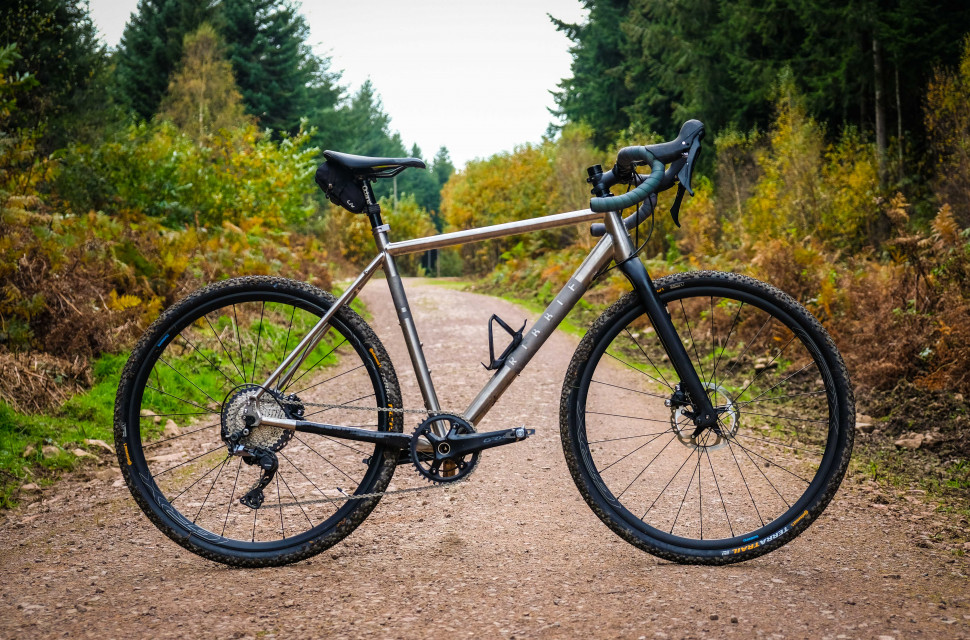 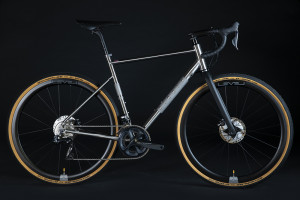 This longterm gravel build has been bubbling away for a while now with parts being stockpiled in the office. Now I, Rachael, have my own adventure build complete, I've matched a Ribble CGR Ti frame to a Shimano GRX RX600 groupset, check out the full details below.

The master plan for this bike build was meant to be a simple one - find a frame, put Shimano GRX on it, go ride. But the more I thought about it, the more credentials I realised wanted this frame and the bike to have. There was more I needed from a gravel and all-road bike and, in keeping with the off-road.cc ethos to test bikes at a reasonable price, I also needed to bring this bike build in on a reasonable budget, I didn't really want to step over the imaginary 3k mark at full retail. 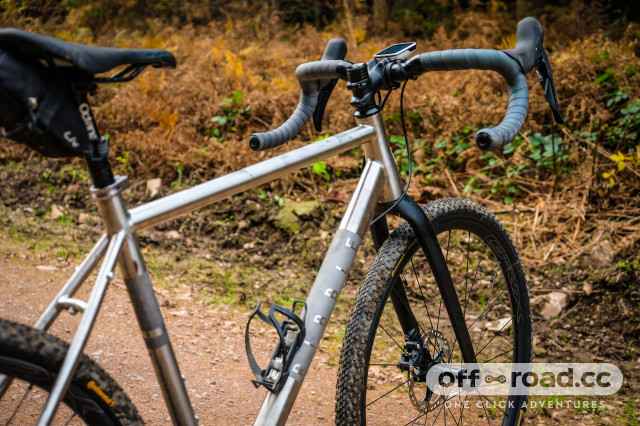 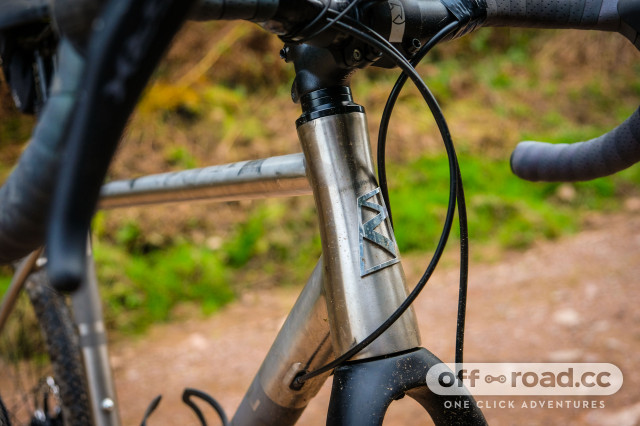 At the top of the list was the need for a frameset that could accept larger diameter tyres, we like a road ride here on off-road.cc but knobbly tyres are our mainstay so this bike needed to accept a larger more aggressive tyre ready for some mud dwelling this winter. I also have a penchant for steel bikes so I was searching for something made of this fabulous metal that could also accept beefier rubber. Checking out the bikes in the Ribble range it was soon clear that you could get a titanium CGR frameset for a keen price of £1,799 meaning that I could up her game from steel to the Ti 'wonder metal' and still bring the bike in on the metaphorical "budget". You can't get the steel CGR 725 as a frameset but compare the GRX specced bikes and you'll see a £700 price difference for Ti, the steel complete bike is £1,499 and the Ti one in the same spec retails at £2,200. 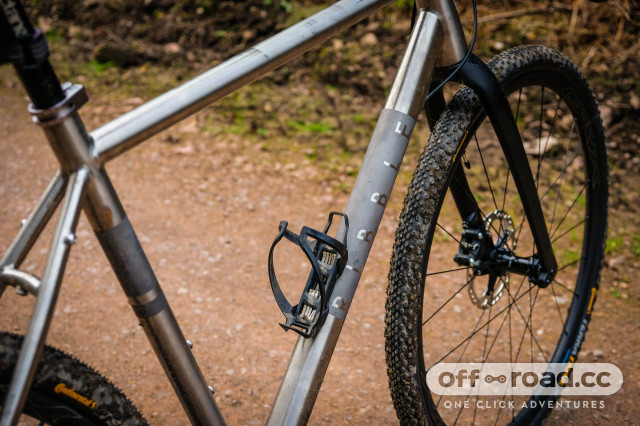 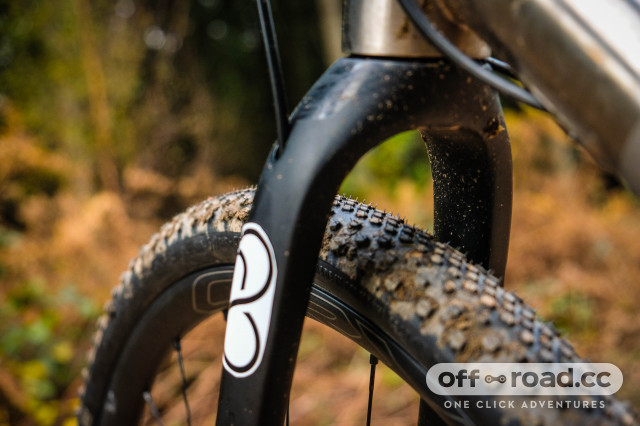 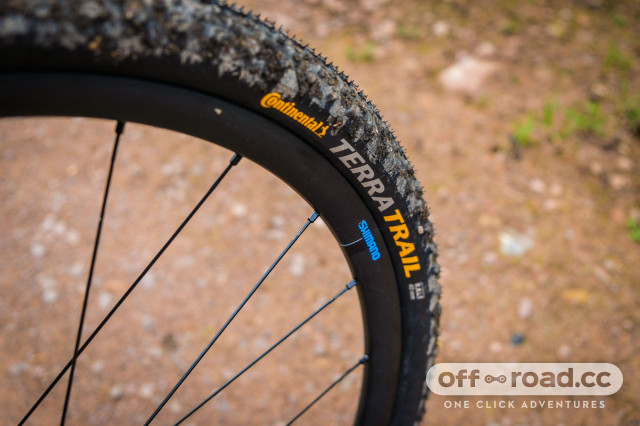 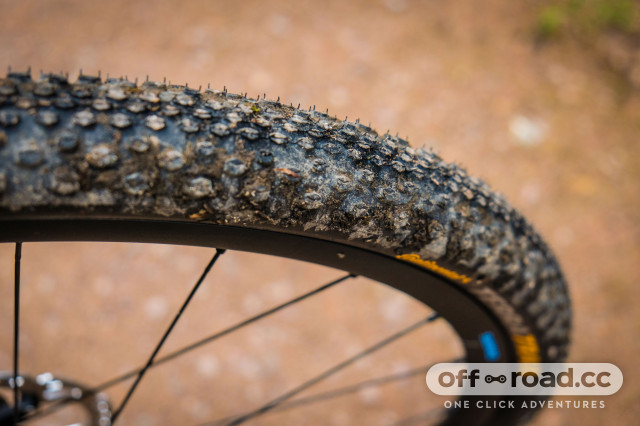 Speaking of GRX, this bike is kitted out with the cheaper mechanical GRX groupset (RX600). You can get GRX in two specs this one or the Di2 version called RX800, road.cc has that one in for test but in the meantime we've had a look at both and compared their weights, you can find those articles below. 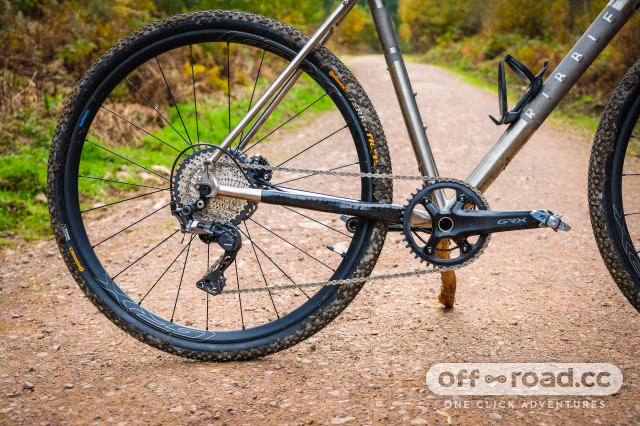 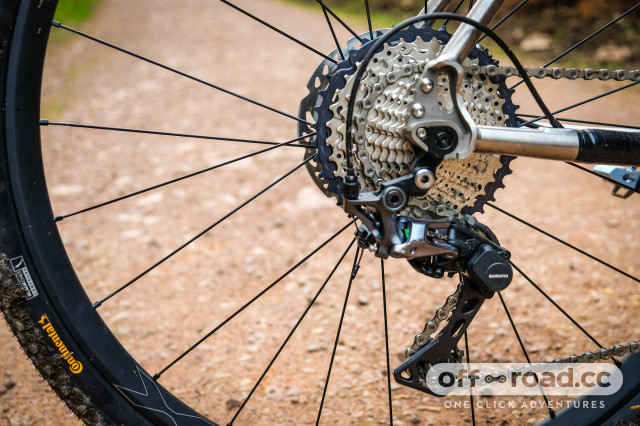 My GRX as a complete groupset (minus wheels) weighs 2,765g and costs a princely sum of £724 at full retail. As you can see, ours is a 1x11 set up and it actually only weighs 80g more than the Di2 1x version, a large number of parts are used across the range including the cranks and brake caliper. With both 1 x groupsets you use a cassette from the mountain bike range, I've got a XT one on one set of wheels and an SLX on the other, both are 11-40T. Both groups use the same Ultegra level brake discs but any 140mm or 160mm mountain bike discs will work too. 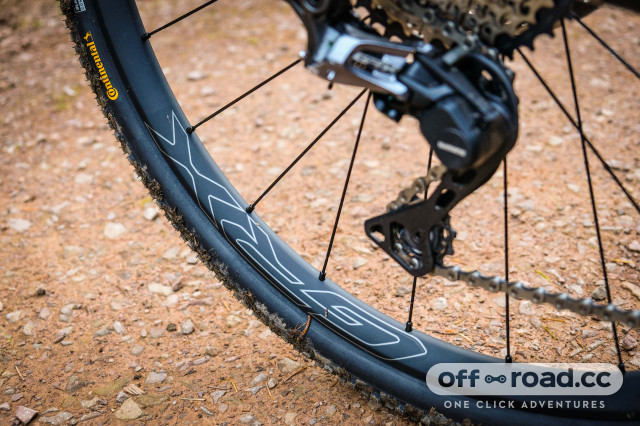 Into the cockpit the bike gets some components from Specialized with a MIMIC power saddle and a Specialized Alloy Hover Flare bar. The bar has a 15mm rise and a 12 degree flare, the rise gives a taller riding position on the flats, its something I'll be experimenting with to see if it's necessary for this bike and my riding style. Elsewhere there is a borrowed seat post which needs to be replaced and some very cool Spesh Holographic bar tape which is almost as expensive as the bars at £42! 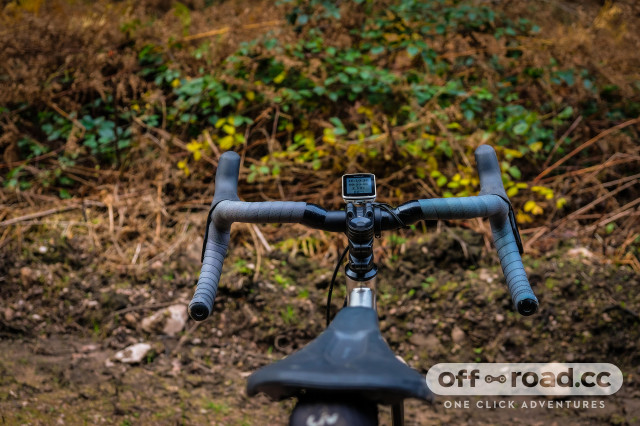 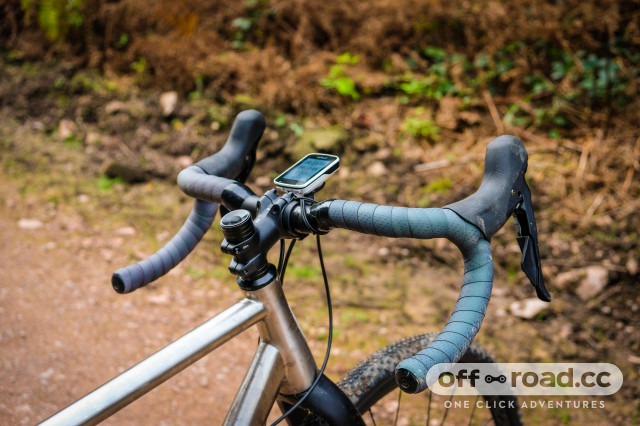 Lastly, I have fitted Crankbrothers Candy 3 pedals, I've been riding gravel bikes with the composite Candy 1 pedals and found that they clear the mud well so I'm testing a more expensive model of the same pedal here. Pedals aside, this build comes in at a little over 3K, but that is with everything priced up at full retail including the frame. Although, as you know this is a test frame so its on loan it was good to price things up as I built. It also highlights the deal you get when you buy the GRX specced CGR Ti full build from Ribble. It doesn't use the exact same spec but it is a similar level of kit throughout, that bike costs £2,199. If you find you have pennies to spare or a favourite part you really want to include you can up-spec your bike further. 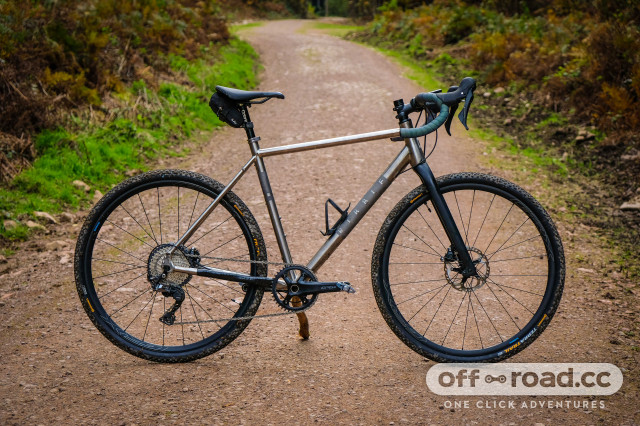 For more information on the Ribble range or this CGR Ti go here -www.ribblecycles.co.uk

Is there any follow up to this article? It would be good to have a review to date after over five months. Maybe there is and I just can't see the link to it.  Also some response to the other post here would make it seem like the site is alive.

...aaand, Ribble has now revised the frame geometry, before we get to read a review. Oh well.

Is there any follow up to this article? It would be good to have a review to date after over five months. Maybe there is and I just can't see the link to it.  Also some response to the other post here would make it seem like the site is alive.

Does that build work for you?  Looks like the frame is too big with the saddle all the way fowards even with a very short stem.  I find gravel bikes harder to size - they are different to road and MTBs, I think going down a size from my road size would be a good thing.

Can you clarify the forks are as supplied by Ribble now?  They look different to the ones on the Ribble website for the Ti bike - these look like the forks on the new aluminium and steel CGRs.  Have Ribble changed the design for the Ti one too?  Sadly I don't like way the rear of the fork curves forwards from the rear on the crown on the side-on view.