Skip to main content
Log In Register
Gravel, adventure - whatever you call it, this bike aims to do it
Jon Woodhouse
|
Oct 9 2017
|
More News 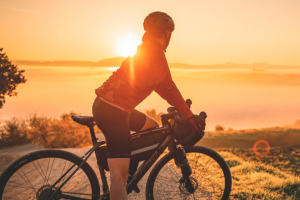 Video: The new e-SILEX - e-discover the path unknown
A beautifully shot video shows Merida's new e-SILEX in all its glory

Merida's new Silex is one of the new breed of bike that blurs the lines between an adventure bike, a gravel racer and a sort of do-it-all drop bar machine that can either partner a road or mountain bike, depending on your preferences. We spoke to the bike's designer, Patrick Laprell, for a quick rundown of what the bike is about and the thinking behind it.

The Silex range draws its design influences from the world of road, mountain and more traditional touring machines. There's loads of clearance for up to around 44mm rubber on a 700c rim, it's absolutely covered in mounts for extra bottle cages, racks and guards and in this top end carbon guise it's not far off the weight of a pure disc road bike.

However, it's the geometry that really makes the bike stand out, taking plenty of cues from the mountain bike world, with a relatively short 80mm stem, a long, dropped top tube and a reasonably slack head angle too. The head tube might look incredibly tall by road standards, but there's a good reason for that.

If you need to extract maximum control and braking power, then you need to ride on the drops rather than the hoods or tops. With a traditionally aggressive and low front end, that'd put your weight even more precariously over the front of the bike once you get onto steep terrain. Merida reckons that having the front end up higher means you can access the drops during technical descending, as well as being able to stay there for extended periods without straining your back. It also means a much more relaxed position when you're out of them, which is probably a good thing for long bikepacking or touring trips.

As mentioned before, if that sort of big trip is what you're into then the Silex is absolutely festooned with mounts, including a pair on the fork and three on the frame. Merida is also producing a range of 'Anything Cage' style mounts and bikepacking bags, which we also have in for test.

There are both aluminium and carbon fibre options in the range and while stock bikes come with 35mm semi-slick Maxxis rubber, you can even move to 650b wheels with an even fatter 47c tyre such as a WTB Byway. The bike uses mountain bike style through axles front and rear, so it's possible to switch in an old wheelset should you have one spare.

The top end carbon framed bike in the video is expected to cost around £3,600 and comes with a SRAM 1x drivetrain, but we also have a more affordable twin-ring, aluminium framed bike in for test as well. Keep your eyes peeled for full reviews of those soon.