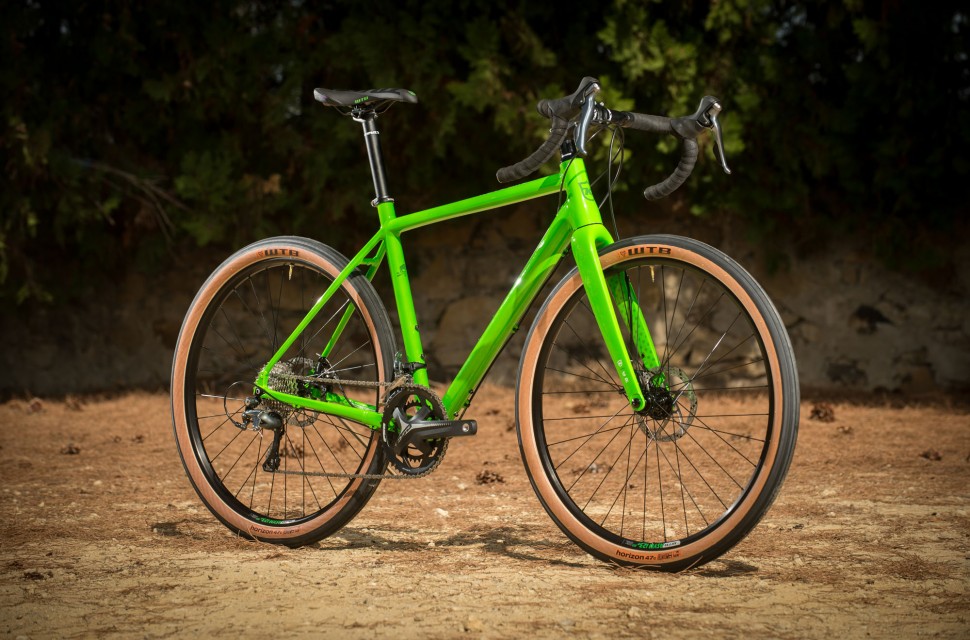 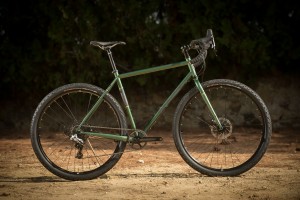 Video: Marin Four Corners in Malaga
Less bike packing, more kicking up dust in the winter sun!
First Look: Merida Silex
Gravel, adventure - whatever you call it, this bike aims to do it

I recently had a chance to ride Kona’s 2018 Rove range which gets new aluminium and steel frame options plus three new models in the line-up. The Rove NRB and NRB DL are both based on the aluminium frameset, whilst the Rove LTD is the top of the line bike built with Reynolds 853 steel tubing.

I spent most of my time on the base model – the Rove NRB priced at £1600. For this, you are getting a 6061 butted aluminium frame with a full carbon fork, a 650b wheelset with thru axle Formula hubs and WTB Asym i23 rims paired with WTB Horizon Road Plus tyres. This setup comes tubeless ready. A Tiagra groupset handles the drivetrain, aside from the FSA cranks which have a large 32/48T jump - perfect for grinding up the steepest of inclines. Finally, braking is taken care of by flat-mount TRP Spyre cable disc brakes. 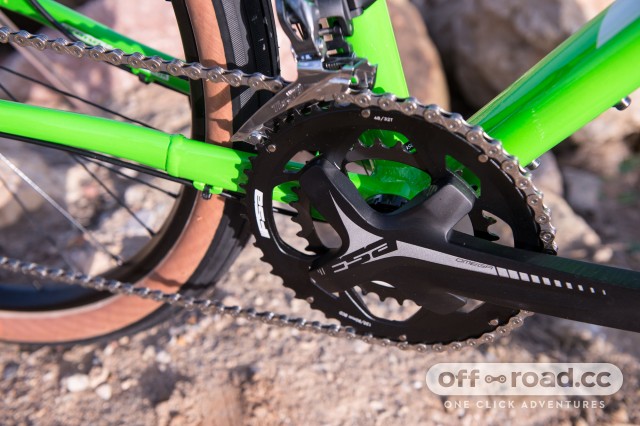 One of the key design choices for this bike was to build it up around the Road Plus tyre platform. Whilst many people will decry that we don’t need yet another tyre size I am increasingly convinced of the merits of this system. Providing a high volume tyre for not much more weight and similar outer diameter to a standard road tyre improves comfort without any significant impact on performance for the vast majority of riding.

We discussed some of the philosophy behind the Rove line and gravel bikes with Kona. The feeling is that people don’t feel safe on the roads and want the ability to expand where they ride. This is where the Horizon tyres are excellent providing good handling whilst on tarmac but also comfort and surprising amounts of traction with their large contact patch off-road. 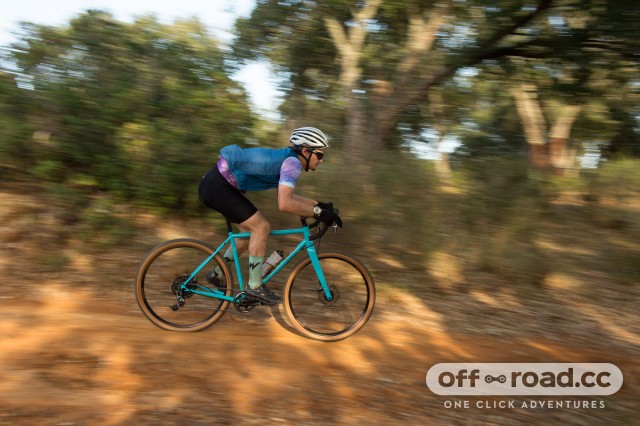 Obviously, this system is slightly heavier than a traditional 28c road tyre, yet not as much as you would think because of the smaller diameter wheels. It's not too difficult to spin these tyres up to speed and they have a large range where they will happily just keep on rolling. For the kind of riding they are intended, the benefits far outweigh the increase in weight.

In order to accommodate these tyres, Kona had to redesign the bottom bracket shell on the aluminium frame. This is now a two-piece forged design which provides clearance for both high volume tyres and either a 1x or 2x chainset. This avoids having to drop the chainstay like on the Genesis Fugio. This also allowed Kona to tailor the stiffness for very low lateral deflection and increased vertical compliance. 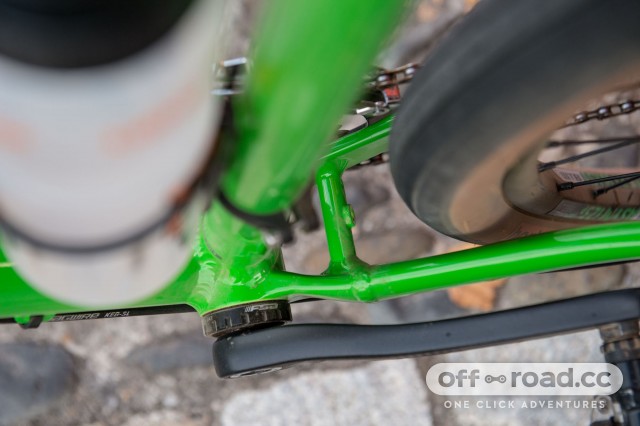 The high-end steel frame (and the Rove ST) didn’t require any such work to be done, and will fit these tyres with a standard bottom bracket configuration.

In practice when standing out of the pedals, there was no discernible flex despite hammering the pedals hard. If anything that stiffness meant the back end could get a bit skittish on looser ground, though good pedalling technique and appropriate torque easily remedies this. I also found the frame comfortable to ride – obviously, the high volume tyres help a lot but I feel the chainstays are relatively well damped. At the front end, the tapered head tube is quite stiff, which is great for steering accuracy but does transmit a fair amount of feedback. I’d be tempted to double wrap the bars if I was spending extended periods on gravel. 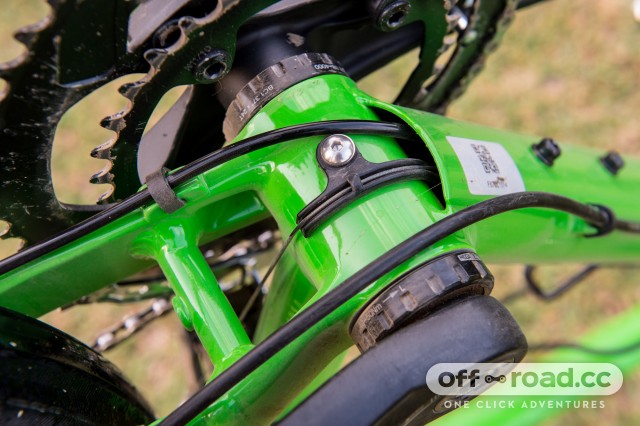 The full-carbon fork is adopted from the cyclocross line and is fitted with mudguard mounts on the inside of the blades. The rear dropouts have been updated and share the same dimensions across the whole range. I particularly like the novel offset mounts for rack and mudguards to avoid interferences when fitting both. There is clearance for mudguards even with the 47c tyres fitted.

I like this bike a lot. I’ll come right out and say it. It’s the kind of bike I like to ride on – I don’t really race so I don’t need an all-out race machine like the Jake, and I want to be able to do as much as possible on one bike. I want versatility and I want fun. I think this bike can provide that. Obviously, it has its own particular focus, its own philosophy instilled in it by Kona but it is adaptable enough to suit most people’s needs. 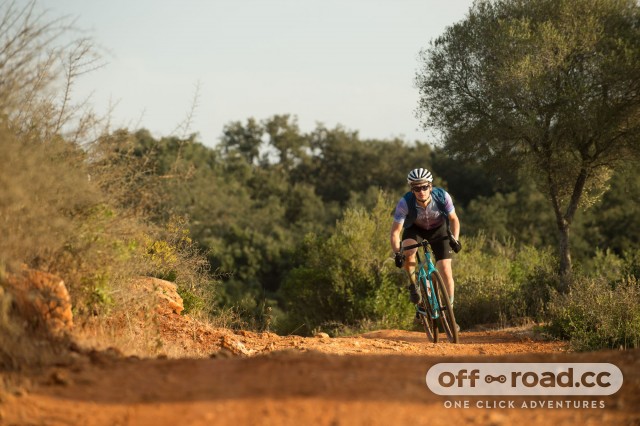 The bike feels compact and manageable. I’m sure that part of this is the 650b tyres that despite their volume have an overall diameter not much more than a standard 700c road tyre. This allows the bike to sit lower than you would expect given the cushioning. Compared with the Sutra LTD that I had ridden previously, I did notice the slightly reduced ground clearance, clipping my pedals a few times.

The Rove does also have a smidge more bottom bracket drop versus other bikes I have ridden recently. However, this was just a matter of getting used to the bike and by the end of the day, I didn’t have any problems.

At a first glance, the new Rove has fairly conventional geometry giving an easy handling and playful bike. It doesn’t really have any quirks which means you can have fun without being surprised by any temperamental handling. I think that a large part of this is the 650b tyres which just have oodles of grip and let you take corners at speed with ease. They also put your centre of gravity lower than a high volume 700c tyre which helps with handling. 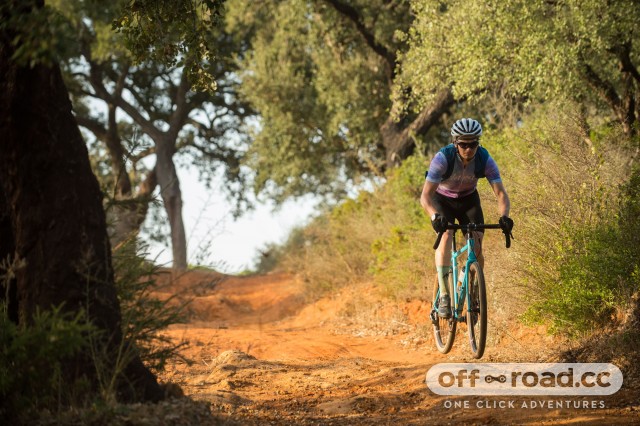 The chainstays are on the longer side, but this does not seem to affect handling at all. My assumption is that the “smaller” overall diameter of the Road Plus tyres contributes to this increase in nippiness. Equally, the 71-degree head angle is on the slack side, but compared to other gravel bikes handling at the front end seems quick and road-bike like.

One thing I would consider is putting a shorter stem to create a slightly more compact position. For general road and easy gravel riding the current setup is perfect; however, when things get more technical I sometimes felt a bit stretched out and would have like to be able to move my weight a bit further back. A slightly shorter stem would help here, but all that said, I still found it quite easy to manoeuvre myself on the bike as well as the bike underneath me. 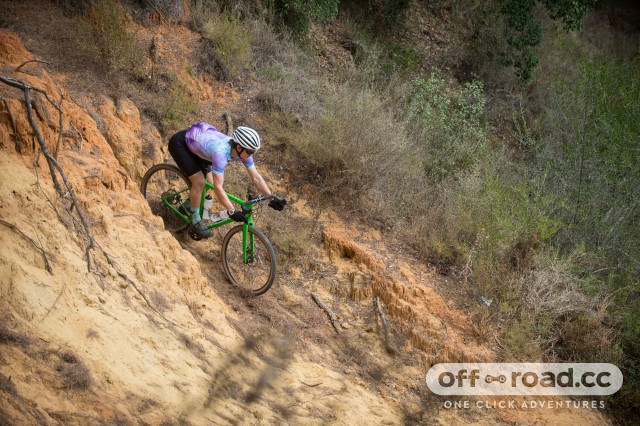 Kona has also attached wide 44cm bars. In use I found these to be quite good for maintaining control on rougher terrain, though my personal preference would be for slightly narrower ones. However, I do like a flared bar as found here.

The bike goes where you point it and stays in control if things get a bit slidy. We encountered plenty of sand during our test rides – which the high volume tyres just seemed to float through – but I also felt very secure on the Rove, which no unpleasant or unpredictable handling at all. In fact, it was comfortable on a wide variety of terrain, from asphalt, to sand, to forest tracks to roads, and one or two sections of more technical singletrack. It takes it all in its stride. 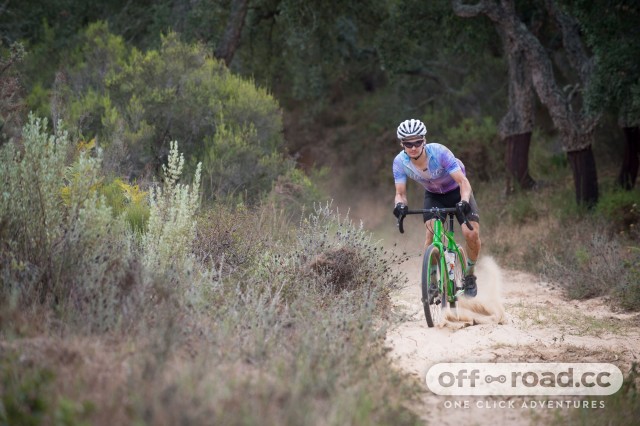 At this price point, some compromises have to be made. I found the Tiagra gearing a little bit temperamental at times with some mis-shifts from the lever. That said, I think the range available is intelligently specced with the 32/48T cranked meaning you’ll be able to get up anything.

What I really missed was a clutch-type derailleur. Shimano doesn’t make these for road groupsets currently but not having this does make for a bit of a louder ride and I did drop my chain once or twice. I continue to be pleasantly surprised by TRP Spyre cable disc brakes. They do not have the same power as hydraulics but they are still reliable and consistent performers. 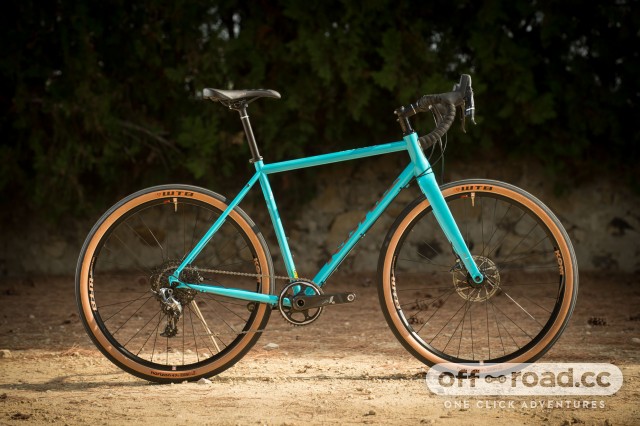 I was also able to spend a short amount of time on the Rove LTD, the top of the range Reynolds 853 steel bike. With identical geometries, it was particularly interesting to compare how the steel felt in comparison. I feel the smaller diameter steel tubing was just a tiny bit more forgiving.

Talking with Kona they did corroborate this - the steel frame deflects more in load-deflection testing. It has to be said that you’d be hard pressed to notice this difference in practice, and I was only able to with back-to-back testing of the two models.

There’s no doubt the Rove LTD is a real showcase of what is possible with steel but its price point puts it out of contention for most consumers. I talked with Kona about this who really regard this bike as a passion project and a showcase of what they regard as the ideal bike for them. The bike they would like to have, and as such, no expense has been spared for this £3500 machine. 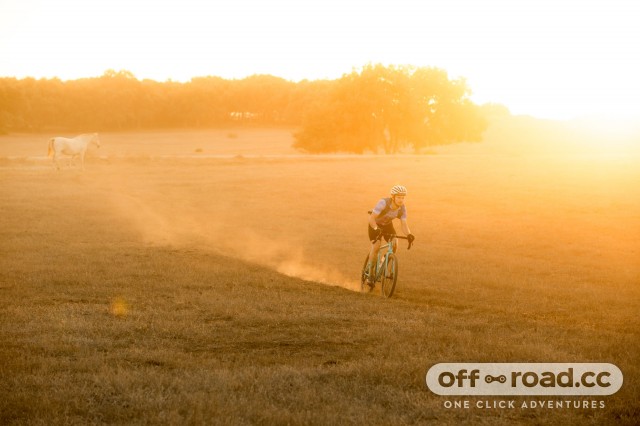 The question that has to be asked then is this: just what is the new Rove for? In my view, you can do anything on this bike – but the clue is probably in the tyres. Yes, they are high-volume but they are slicks and designated as Road Plus. I would describe this bike as an extension of the road endurance concept – a road bike you can do more on.

Kona hasn’t pushed the boundaries of what is possible with a gravel bike, but they’ve created a bike that is happy across a broad spectrum of riding and perhaps the beginning of the reinvention of the road bike market with a focus towards more versatile and adventurous experiences.

All shots by Geoff Waugh