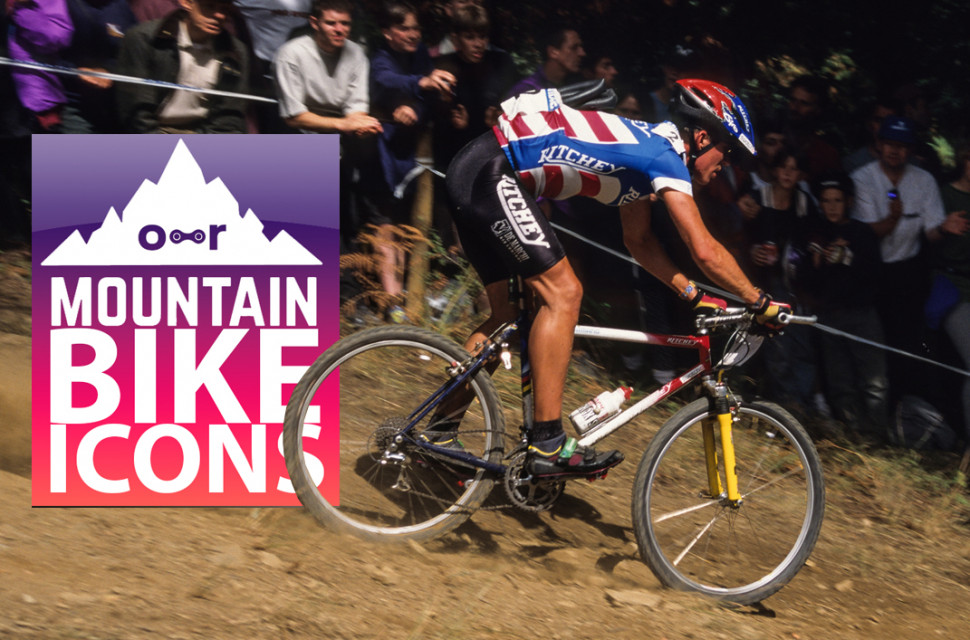 Ask almost any great mountain bike racer of the early years, or even later, as to who they most respected during their careers and one name always makes the list, that of the likeable Thomas Frischknecht.

Coming into cycling with deep and rich roots, Frischi as he is affectionately known, earned his golden spurs in the mud of the cyclo-cross fields of Europe, where he was both Junior and Amateur World Champion.

With what looked to be a glittering and traditional cycling career ahead of him, the young Swiss bucked the system and took to the new sport of mountain biking, and finished second in the first-ever official UCI MTB World Championships in 1990; sandwiched between Ned Overend and Tim Gould.

Over the years that followed, he carved out his repute as a clean-cut, straight-talking and extremely gifted racer and amiable character. 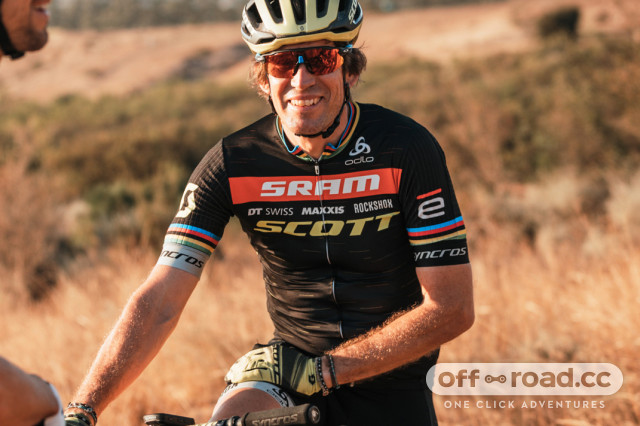 As something a teenage prodigy when it came to racing bikes off-road, the young Frischi had what looked to be a sure-fire and bright future ahead in cyclo-cross and road racing, following family tradition laid down by his father. But then things changed, and he found the new-fangled sport of mountain biking.

“My dad was a professional cyclo-cross racer in the 70s and 80s. This is how I was born into the sport. When I was 17, I started to pay attention to MTB. At the age of 20, I was the first European to spend the season in the United States to race the NORBA nationals. “

Despite cyclo-cross races being just an hour long compared to the then-often long-distance mountain bike races, his off-road-honed skills on skinny tyres gave him the edge when he started mountain biking – as it did with other early adaptors.

“The cyclo-cross racers had the riding skills that made them better than others - except for John Tomac that is. The young cycling discipline offered new opportunities and was not too tradition-driven like other cycling disciplines. I liked that at the age of 20.”

Although a core of elite cyclo-cross racers have, in recent years, taken every discipline of cycling by the scruff of the neck, Frischi believes it’s those skills they learned early on that have led to this success, much as it did for him.

That’s why this works only one way - the roadies don’t have the riding skills it takes to be successful offroad.” 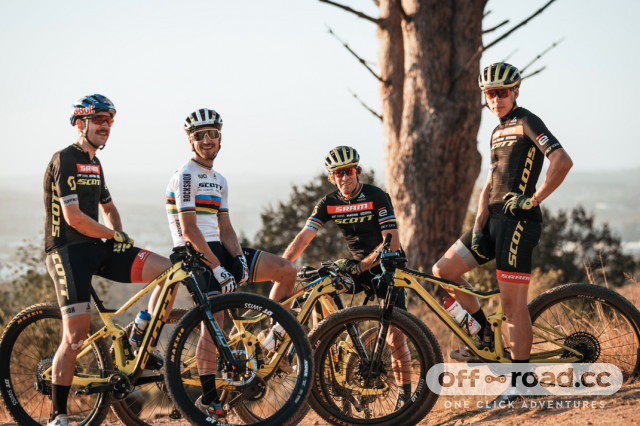 The evolution of a new discipline

From Ned Overend through to Nino Schurter, having raced with numerous generations of riders and seen so many changes, how different is the very spirit of the sport compared to the early years of mountain biking? “The spirit back then was good - and today it still is but many things changed. The love of the sport has remained over all these years. Sure, these days things are a lot more hectic but, in principle, it’s more the race format and equipment that changed drastically, not the spirit itself.”

Although many older riders lament these changes Frischi sees them as a natural evolution and one for the better. “Mountain bibing first had to figure out what the best format was for racing. That took quite some time; the evolution of shorter and more spectacular racing has only positive aspects. We are now a TV-friendly sport - not like 25 years ago.”

A big part of this evolution has been the creation of manmade race tracks, which are far more extreme than those of the early 90s; could he still use his skills and bikes from that era today? “I tried that in Val di Sole two years ago. It’s very tough if not impossible. The drops and jumps of today are very difficult with a bike of the 90s”.

“Manmade courses are part of the making of the sport, making the sport spectator friendly. But there are good examples that modern courses still can be natural; Mont Saint Anne is a good example.”

It’s not only bikes and equipment that he’s seen evolve over the years, the sport has become far more refined and a bigger business. “Back in the day, it was much more of a one-man business when compared to the era of Nino [Schurter] and today. I was wrenching on my bike myself at the beginning, and travelling a lot by car and driving myself. Today Nino has a whole team around him to do some of his work.“

When the golden era turned grey

When the sport became UCI-legal and gained Olympic status things took a turn for the worse, and PEDs (performance-enhancing drugs) entered the scene, as did a whole new crowd of riders.

“Soon after the announcement that MTB was to become an Olympic discipline the sport started to see some cheaters. Also, they came from other countries that were not on the MTB racing map before. It was by far not only the French, but they came in the biggest number of cheaters.”

The most famous and curious incident during that era was when French racer Jerome Chiotti took the UCI Mountain Bike rainbow jersey ahead of Frischi in 1996, and later confessed to doping, passing the jersey in a bleated manner to him - how does that sit with him on reflection?

"At least Jerome Chiotti had the balls to regret that he cheated, and he gave me his World Championship jersey from 1996 - four years later; others didn’t!"

It takes a big man to take such a blow on the chin with a bruise of respect. “Even though Jerome did take the year of wearing the World Championship jersey away from me, he did what he had to do. I have quite some respect for him; he sacrificed his career to become an honest man. In life, I learned to accept an apology if it comes from the heart." 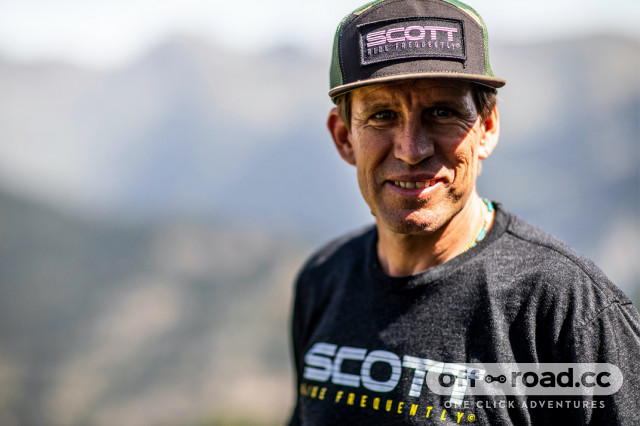 The bitterness of receiving an outdated rainbow jersey and being unable to wear his stripes on the race track was avenged a few years later, which he still ranks as the greatest moment of his career as a racer.

“2003 and winning the first ever Marathon World Championship in my home country and in front of family and friends was the most emotional moment. Especially because it was a sprint finish against my long-time rival Bart Brentjens.”

Despite his long career and great results – there is one gaping elephant of regret lingering aimlessly large on his trophy shelf.

“My biggest regret is that I never won Olympic gold, even though I should have. I’m missing some big titles taken away from me during the dirty EPO days.”

Although he never fully quit racing, Frischi moved on to become rider/manager with his own SCOTT-SRAM MTB Racing Team, whose roster includes his son Andri, former World Champion Kate Courtney, Lars Forster – and, of course, the man who took over where Frischi himself left off, Nino Schurter who just won his 10th elite men's XCO World crown.

Schurter’s success means almost as much to him as his own personal achievements on the racetrack. “I feel very blessed working with Nino for more than 20 years now. And in many ways, he’s kind of the payback for those titles missing in my career. I live in the present, and am enjoying his great career - and I don’t look back what was (or was not) in the late 90s.”