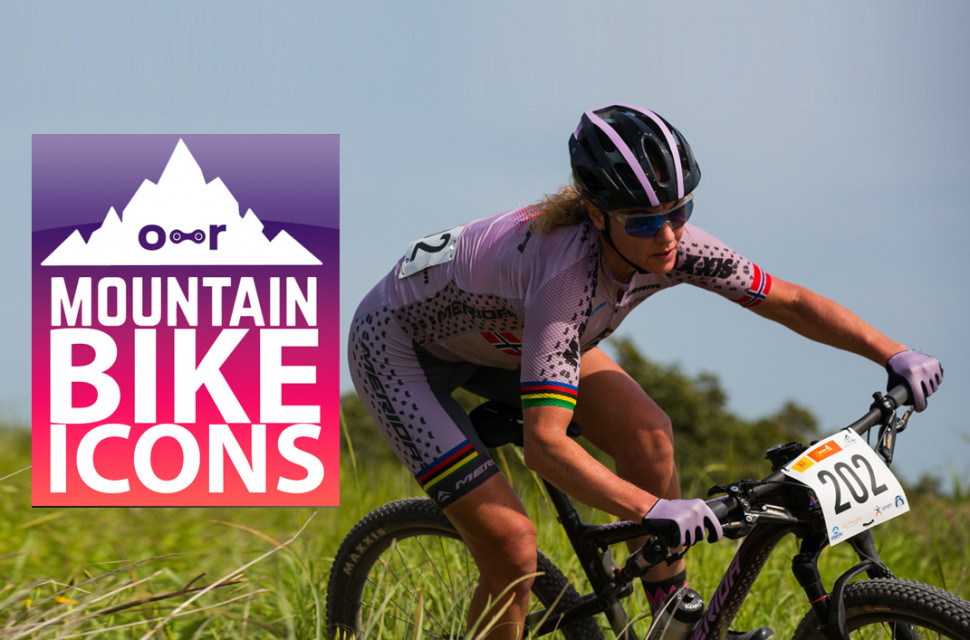 If cross-country mountain biking had its very own shield maiden then that title and honour would undoubtedly be bestowed on the shoulders of Norwegian cross-country racer Gunn-Rita Dahle Flesjå.

During her 22-year-long career, Gunn-Rita adapted well to the evolving world of cross-country mountain bike racing and took an amazing 10 UCI Mountain Bike World Championship titles, an Olympic Gold, and a mind-numbing 30 World Cup victories – with the last coming during her final season of racing back in 2018 - at the age of 45.

Hers is a career and tale to match the great Viking sagas of old; only every last pedal revolution was well documented in vivid detail. 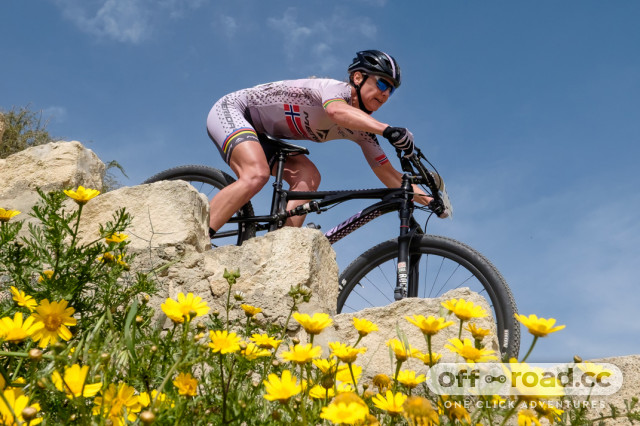 Cycling is not a major sport in Norway, and thus Gunn-Rita started her sporting career modestly on two feet. “I ran, long- mid-distance running, not at a high level – but in the area, I’m from I still hold some long-distance records,” she modestly tells us.

During her teens cycling hadn’t even registered as a sporting option, it simply was not the norm in Norway, where winter sports dominate. “If you go home and say that you want to give it all and try to get into the national cross-country ski team, then they (parents) understand, and know it’s a tough way to go; but with cycling, they just don’t understand.

Even after becoming a multiple UCI Mountain Bike World Champion and winning Olympic gold, her stature still didn’t fully resonate on home turf. “We (with her husband and coach Kenneth) still had people asking: “so what do you really do for a living?” Even when we said that we had been professional for 22- years, they didn’t understand. We gave up trying to explain. It was easier just to make something else up.”

With no early professional sporting ambitions, she took another potential career path. “I trained as a journalist at Stavanger University but now nobody would even pay €5​​ for that piece of paper. It’s not really worth anything anymore.”

Even so, the understanding of how media worked proved a great baseline for her in her future cycling lif. “I feel I benefitted from it, as I could use it as soon as I got into cycling. I did great, and could really work well with the media, and I enjoyed it. But, when I think about it as an education; it’s really not of much value today.”

She decided early on to manage her own media in a straight and open manner. “I said from very early in my career that I wanted people to read about me as I am. I decided that I didn’t have to tell everybody everything, but what I did tell them would be the truth – I promised myself that very early on.”

Her approach was something that didn’t always sit easily with others. “I’m really straightforward; some like this, some don’t Maybe it’s because I had media training before cycling, but I’ve always been aware that I can use this to also promote my sponsors.”

She was 20 years old when she first discovered mountain biking. “In 1995, I bumped into a trainer from a local club and they asked me to come and join them for training – that was my first introduction to a mountain bike. Then I didn’t even know there was mountain biking, and didn’t know anything about road racing.”

As a complete rookie, she took 3rd in her first World Cup race, in Plymouth, and by the end of her first year of racing she had scored a contract to race for American Eagle, the rest is pure history, golden history – handwritten by the lady herself.

The extensive and extended highlights 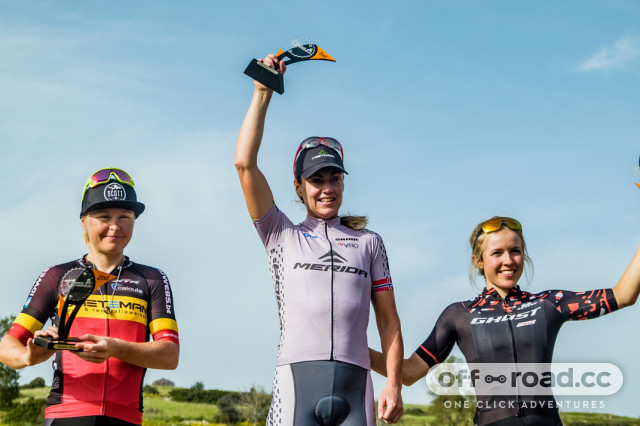 With such a lengthy list of career greatest hits, what was her personal highlight?

“Oh, that is a very difficult answer because we had so many big highlights, all with very a different “road” leading towards that new goal.”

The first titles headline the list. “My first European and World Championship titles came in 2002, after several years of being totally overtrained and stressed out. Everyone had given up on me, I was seen as ‘damaged goods’.”

However, she underlined her grit and gold with consistency. “Then there was 2004 and winning more or less everything I took part in. Repeat that for two more seasons - that constancy ranked higher than winning one gold medal did for me. To repeat that success constantly takes guts and determination - in my mind.”

Mid-career she took a break to become a mother. “Having our boy was the biggest gold - in March 2009. For sure the most important gold in our life (some more of this kind of “gold” came after I retired and became a mother again).”

Few thought she would, or could ever return to her former glory. “The “comeback” after becoming a mother and then winning the European Championship in 2011 was huge for me.”

Even as she hit the big 40 rainbows still lay ahead. “Winning the UCI Mountain Bike Marathon World Championship as a 40-year old woman was something special (in 2013).”

Two years later she achieved one of her career-long goals. “Taking the 10th rainbow jersey in 2015 by winning the World Marathon title was also great.”

There was to be no bowing out gracefully, Gunn-Rita wanted to go out in style. “Our last season (2018) was also full of highlights; European Marathon Champion, my 30th UCI World Cup win, and also taking a bronze at the World Marathon Championships. My first World Cup win came in 1996 and the last one in 2018.”

All boxes were ticked, well – almost, and so she decided to follow her own pledge and to leave the sport on top. “That was very special. We talked about winning 30 World Cups for a long time. We did win (with Kenneth as coach) a lot of World Cup races back in 2003-2006, and then after the Olympic gold in Athens in 2004 we needed to aim for some ‘impossible’ goals.”

“We came up with the ‘mission impossible list’ – and it looked like this: 10 x World Championships, 10 x European Championships and 30 x World Cup wins. We missed one European title.”

Despite that missing victory, there were no hang-ups about hanging up her number board. “We stopped when on top of the world. I felt like we had achieved a lot and retired because I and we wanted it. It felt like the perfect time and we did not look back at all - the only thing I miss is the good shape that I once had.”

The Olympic dream, or not?

Somewhat surprisingly her Olympic gold from 2004 didn’t quite make her own hits list. “As an athlete who won a gold, you reach out to people who are not even interested in the sport. It’s about sponsorship and attention, so it has great value for your career.”

But then there’s the flip side of the Olympic ideals. “At the same time, you also know how much politics, money, almost like fake money, is involved. You also see a lot of people suffering from having to be moved out of their homes, but also, as one of the champions you have to be there. Put it this way; I won’t miss it.”

With so many highs also came a fair few lows, which didn’t help in her love-hate relationship with the Olympics. “I had a bad crash in the Olympics - both in Beijing 2008 and London 2012. I did not prepare well enough for the handmade courses and I had to pay for that.” 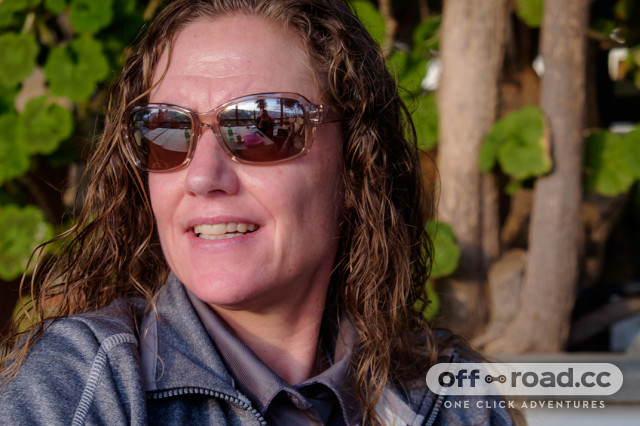 Soon after retiring, she became a mother again and also took on a new career. “I work daily with traffic safety, regulation and behaviour at a primary school in the county of Rogaland.”

“It’s a great and important job in today’s society, where the bike is not anymore the most common way to travel from A-B. Traffic safety is something that needs continuity and work with parents, pupils and teachers.”

Meanwhile, her eldest son is following the family path. “Our ‘big boy’ Bjørnar, is an active boy that loves cycling - road, CX and MTB, and he is a decent track and field runner, too. So if he chooses the same path as me then we will support him when the time comes.”

Riding bikes also still feature in her own schedule, too. “I ride my bike as often as I can. When I go to work it’s about a 15km ride – and I always go by bike. Going to bike festivals and still representing Merida is also an honour, and I love every minute I spend out on the bike together with Jose  (Hermida) and our guests on rides. I call it ‘enjoying the dessert’ of my mountain biking lifestyle.”