Skip to main content
Log In Register
Nick Craig has been a top-draw fixture on the UK cycling scene for over four decades. This is his story 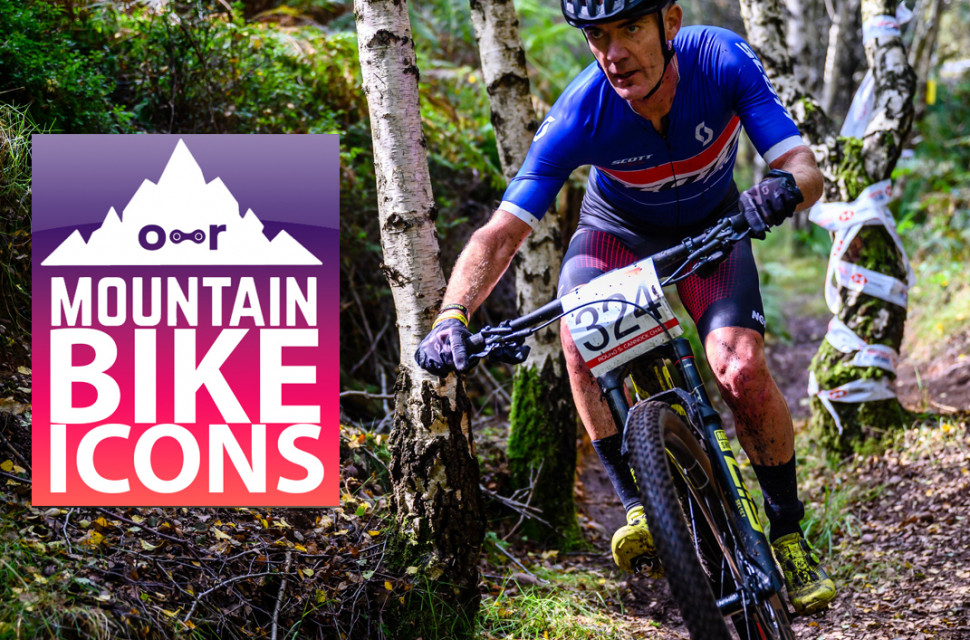 As a bonafide veteran of the sport, you’ll struggle to scan through the British National MTB Series or cyclo-cross results from the past 40 years and not find the name of Hayfield-based Nick Craig etched somewhere at the top end of them. This is a staggering feat in itself, especially when you put his high-level consistency and age into perspective.

The ever-affable Craig started carving a trail towards lining his cupboards with his numerous and coveted red, white and blue striped National Champions jerseys at a rather tender age, way before such a thing as cross-country mountain biking even existed, as he recounts. “My dad introduced cycling to me at the age of nine. He decided to start riding again, as it was something he loved and he also happened to be good at.”

With a wealth of cycling experience and credibility behind him, Nick’s dad - Ian (RIP) - was determined that the youngster enjoyed cycling and racing without any pressure to perform - and he made sure he went about it in the right way from the get-go.

Much like his father before him, for Nick, it was racing skinny tyres off-road that hit the passion buttons. “Cyclo-cross was the main thing, and then road crits in the summer. Later (aged 12) I started track racing, too, anything that involved pedalling made me smile.”

“My dad insisted that I learned to pedal on short cranks - 165mm, and with a 59-inch fixed gear in the winter. This was a very old-school method to teach you to pedal smoothly, and it also made you strong when ridden in the Peaks. It also kept you warm, as you were never able to freewheel.” 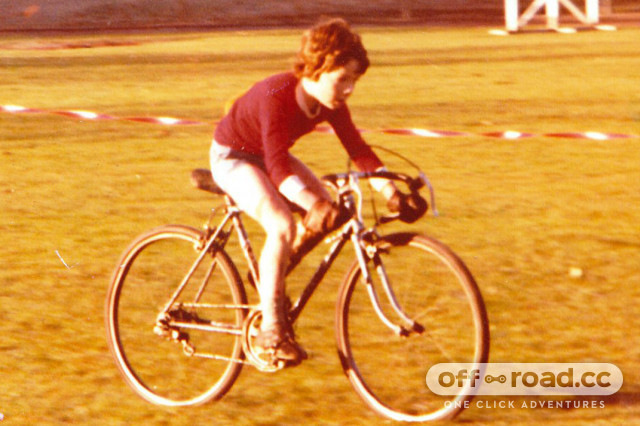 It was in his late teens when a new kind of off-road riding first came around. “My first love is cyclo-cross, and then when the mountain bike arrived, I was very happy to switch to riding mostly that - instead of riding on the road. It was a much more friendly atmosphere.”

His first mountain bike experience came on home turf. “It was in November 1988. We rode some Muddy Fox clunkers around Kinder Reservoir in the snow, it wasn’t a great intro. For the first race we drove four hours to Kielder Forest, and then when we arrived, we found out the race had been on the day before, and so just did a three-hour ride and then drove home.”

The sport was not UCI-sanctioned back then but a new national series was emerging. “That year we focused on the national series races, which were in great places; like Bosley, Margam Park and Beddgelert. We did trials DH and XC, and  I just loved it.“

With few rules or regulations to go by and with an ever-evolving and rebellious feel to it, the new sport of mountain biking was far from the traditional cycling scene that Nick had come expect.

“It felt like we were at the beginning of an exciting new sport. I feel so lucky to have been there in the early days of the UK scene. Tim Gould and David Baker really inspired me and then Fred Salmon (a friend and local lad) was going to ride for a shop team in Huddersfield called Pedal Power, but then he got an offer to ride professionally for Peugeot.

"He suggested that I and a few friends (Rick Hammersley, Pete Middleton and Carl Mottershead) speak to the owner of the shop, and so our first MTB team was born in 1989. We had a rider-manager in Rick, and we just got stuck in. We did the Grundig Cup in Aviemore, and events like the Malverns Classic, which had huge crowds and big prizes.”

Many lifelong bonds were forged during that pioneering era. “I’d raced with Jough Watson in CX and MTB races right from the late 80s, right up to the current day. It’s such a close-knit sport and is full of passionate people who just love everything bike.”

“From finishing just behind me at the 3 Peaks in 1991 to the shared memories of the fun times at the Malverns Classic, he is now my line manager at Scott Sports (his employer and backer for many years) - and the fun continues.” 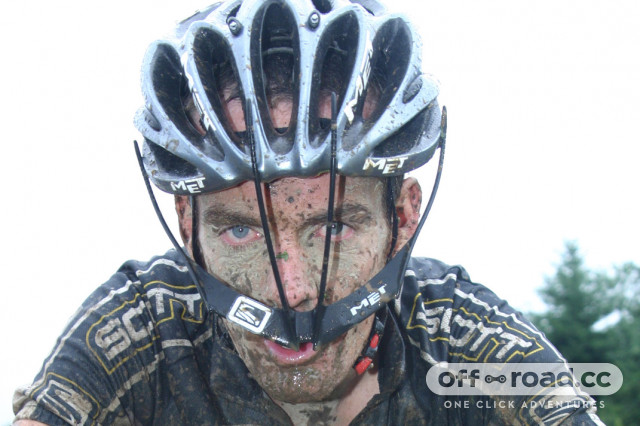 With the sport gaining pace faster than a brakeless downhill mountain bike, things soon started to get a tad more serious. “In 1990 we switched teams, to Specialized UK and we had a great team. Along with Sally Hibberd (now Reidy), we were lucky enough to get picked for the first-ever UCI Mountain Bike World Championships in Durango. That was an amazing experience.”

By then Tim Gould and David Baker were making their mark on the World Cup and NORBA series in the USA, and soon enough opportunity came knocking on a certain Hayfield front door.

“In the winter of 1990, Simon Burney (Peugeot team manager) contacted me. David Baker had left Peugeot and this freed up a place - and so on 1 January 1991 I turned pro for Peugeot.”

“We had so much fun racing MTB, road and CX. That fun was next-level but I would stay on the edge of this at times, with Fred (Salmon) often leading the carnage, and with Simon always reining it in to keep us acting professional.”

Those early MTB classics were ultra-long distance in comparison to today’s XCO races, and when raced on rigid bikes they took their toll on riders.

“I found it tough going and every race was more like a marathon. Often, I also had to qualify the day before at Grundig World Cups.”

“There was no U23 category, so I was straight in with the best in the world as a nineteen-year-old. This was a tough schooling, and one my health struggled with, right up until I matured, aged around 24 - and then, things got easier. Right through this Tim Gould always supported me, even when I left Peugeot in 1993 (for Diamondback).”

In search of adventure and opportunity, Nick later headed to United States of America. “In 1997, I went on a road trip to Canada and the US for three World Cups. I went with Ian Cuthbertson, and we rented a motorhome - well, one that was lashed onto a pickup. We had so much fun.”

“I had a plan - I found the US marketing manager of Diamondback and explained who I was and asked if he would watch me in the three races. This was in the hope that I would impress him enough to get on to the world team for the 1998 season.”

“I needed a team that could offer me the support - the mechanics, a massage therapist and a manager, and the following year I joined the DBR world team and got that.”

One of his teammates that year was a young Australian teenager who would go on to win the Tour de France.

“That was with Cadel Evans, and they were a great bunch of riders. We continued to have fun, and I had everything I needed to perform. I got my  World Cup top 15, and  then I set my sights on what I had to do - to crack the top 10.”

Even though he was on the brink of something more Nick came to a harsh realisation. “I worked really hard in the off-season, and I looked after myself, all with the relentless support from my wife Sarah. I realised that I was never going to be a World or Olympic Champion, but felt that I could be top 10 (in World Cups) on my best days. I had to accept this, and when I realised that I was basing my happiness on my performances, that wasn’t healthy. I just enjoyed the journey I think this has helped me to keep the passion and love for cycling.” 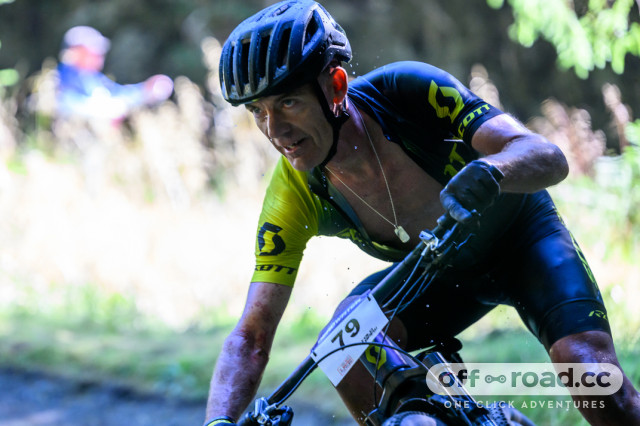 [Photo courtesy of Man Down Media]

With having earned his stripes many times over (seven elite titles MTB and CX, and many age-group titles), there is one career high that still makes him tingle inside.

“The 1998 round five of the World Cup in Plymouth, with plate number five on and leading down the Pipeline in front of a massive home crowd; it gave me goosebumps all race long.”

“It was hard after my breakthrough season in 1998 to then see the first “plateau” in the sport. Sponsors were struggling, so I ended up riding for British Cycling for the first six months of 1999, and riding on a terrible bike. I was lucky to then sign a 2-and-a-half-year contract with the new owners of DBR.”

“I wouldn’t ever have regrets, maybe just a few mistakes that I always tried to learn from, and this is something that I hope I still do. “ 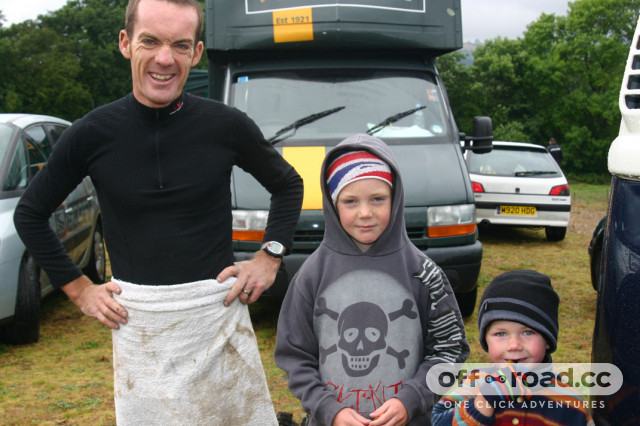 Nick and Sarah had young two sons: Tom and Charlie, and both were making their way toward the highest levels of offroad racing, and they were having great fun doing it.

Tragically, on one fateful January morning in 2017 15-year-old Charlie, the youngest of the siblings failed to wake up.

“That day our world changed. Child loss is the worst loss. We had to make a choice - should we walk away from the sport or face it? We chose to face it, and as hard as every race we attended and still attend is without our beautiful boy, we are doing what he loved, and we are supported by the amazing community that the cycling world is.”

“We try every day to live a life he cannot. Having Ride for Charlie is so good for us; it is incredibly hard at times, but to see young riders experience the things Charlie was lucky enough to experience during his short but incredibly full life (is fulfilling). It’s also an opportunity for me and Sarah to talk about Charlie to those who knew him, and also those that didn’t.”

What keeps him going?

“I have amazing support from Scott UK and have a great relationship with the Scott Swiss team. This means I get the best bikes and am encouraged to keep being the best ambassador I can be.”

“I keep racing because I love it. If I stop enjoying it, then I will stop doing it. It’s not the same without Charlie, but it’s my time, and when I ride then I can process and think.”

“I just enjoy the competitive aspect of racing, and nothing gives me more pleasure than beating someone who is stronger and fitter than me by using my tactical and technical skills and my experience. If a young rider, let’s say one of Charlie’s piers, tells me that they learned from racing with me that’s a win in my book.“

Please check out the link below to learn about Ride for Charlie.