Skip to main content
Log In Register
South African downhill racing ace Greg Minnaar has been at the top of his game for longer than some of his rivals have been alive, this is his story 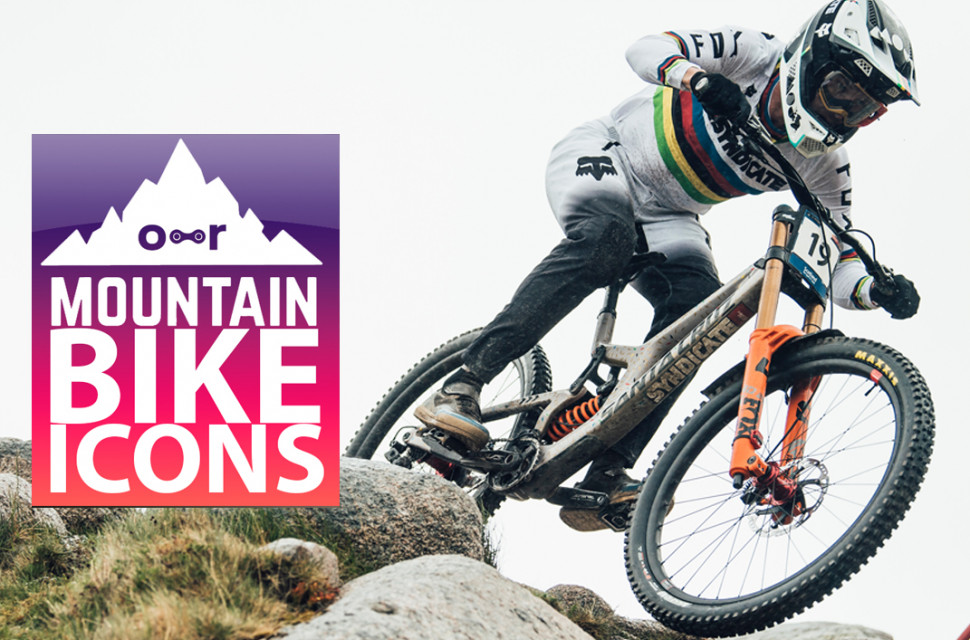 With four UCI Downhill Mountain Bike World Championship titles, three World Cup overall victories and a record 23 individual World Cup round wins to his name, Greg Minnaar is one of the most successful downhiller racers of all time. What’s more - he’s still at it, despite just being on the other side of 40 years old.

While downhill mountain biking is generally considered to be a sport for young men, the 6 feet 2-inch-tall South African racer has been at the top end of the sport for more than 20 years now and has somehow managed to evolve and thrive along with the rapidly changing extremes and demands of downhill racing.

Greg’s first overall World Cup title came way back in 2001, and the first of his four World Championship titles came in 2003, while his most recent world title came in 2021, at the tender age of 39 (and a bit) when he upstaged the young French revolutionaries who have dominated the scene in recent years.

From motocross to downhill mountain biking 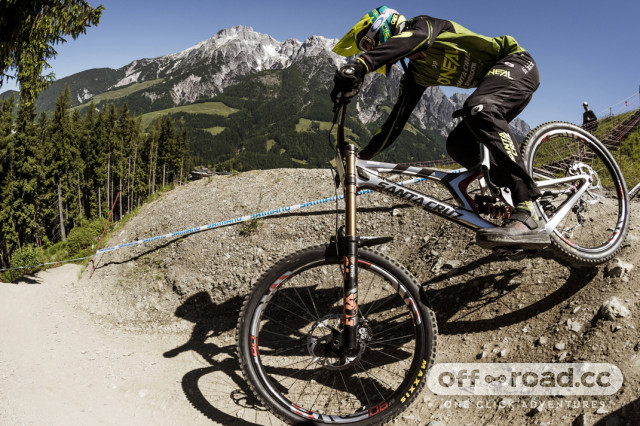 Most young riders get into the sport through friends and peers, although Greg’s introduction to mountain biking was slightly different, as he explains.

“My parents bought a bike shop (in Pietermaritzburg) and that’s what got me into bikes.
What pointed me towards downhill was that I’d grown up riding motocross. It was a natural progression. The speed and everything else leaned towards downhill, and that gave me the foundation for it.”

Having grown up in a bike shop, Greg has also learned the workings of the bike industry and of bikes better than most, and he still plays a role in the family business when he’s not racing and is also a director of Rush Sports, importer of Santa Cruz to South Africa.

“My father got pretty ill 11 years ago, so that’s when I took the shop over. He’d done enough time there, and it was time for him to enjoy the rest of his life. I just felt that I needed to jump in there and take over. It’s been going well, and it’s been a real learning curve, too.”

Back when Greg started riding most riders did all disciplines and, in South Africa, there was (and still is) a strong marathon racing scene, and Greg even rode the first-ever Cape Epic (partnered with Liam Killeen) and he still does ride other bikes.

“I’ve never raced on the road, but I’ve always ridden on the road to train and to make sure that I’m strong for the World Cup season.”
“Cross-country mountain biking was something I raced when I was young, although that was not where my talent was. I’m not built for cross-country racing, I’m just a bit too heavy.”

“I found that it (XC) just wasn’t a good fit for me, and I really enjoyed downhill. Although downhill didn’t really get the recognition in South Africa back then (or even globally).”

“It probably still takes a back seat in most countries when it comes to racing (behind XC). But, that was my fit, and so I did everything I could to be fitter (by riding road and XC), to be ready and I went towards downhill.”

Leaving Africa in search of glory 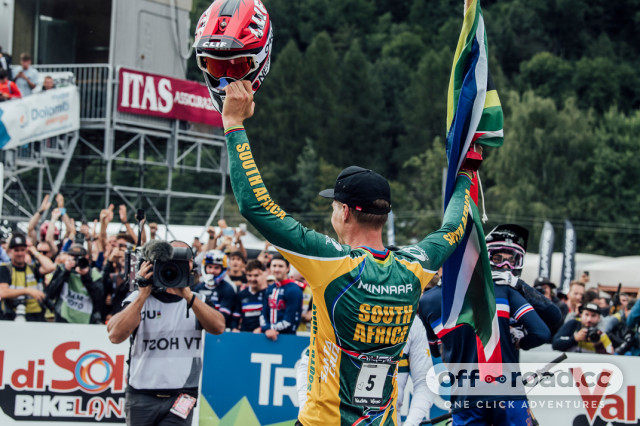 With more and ever-emerging downhill racing opportunities to be found in Europe and the US, and with having a British-born mother Greg decided to take a leap of faith in the late 1990s and came to the UK to race with the Animal Orange team.

At that time, the UK didn’t have a huge presence on the global downhill scene - apart from the emerging Steve Peat, a man who was to become his great friend, and a career-long adversary, too.

“I was sponsored by Tioga tires, and so they kind of helped me out. They had a really tight relationship with the Animal Orange team, who were based in Dorset (southern UK).”

This was also where he first met Steve Peat “Steve Peat’s wife (Adele Croxon) was one of my teammates, and so he was always kind of hanging around. I got to know him, and that’s how we became friends (and then teammates).” 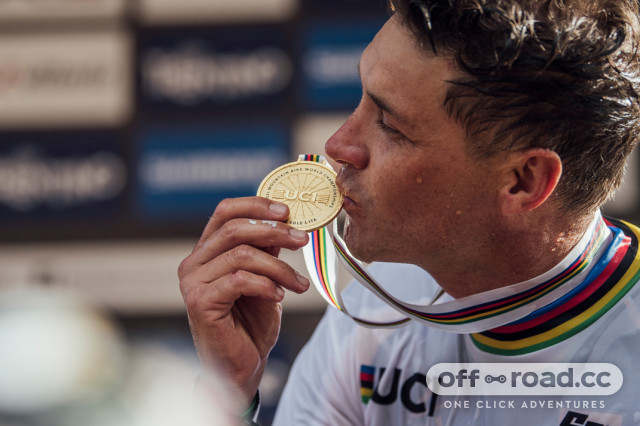 In the early days of downhill mountain biking, many riders famously didn’t train or trained very little. Time gaps between the racers on the track were measured in seconds, although even through the haze of the downhill party lifestyle of the era there were those who did train - riders such as Nico Vouilloz, and Greg himself, which showed in their consistency, and in Greg’s case his longevity on the racetrack.

In today’s millisecond-divided downhill racing arena only Greg still races at the elite level. Would the legendary non-trainers of the late 90s and early 2000s still be able to cut it out there today?

“No, I don’t think they would. I think downhill racing now is so close. On some tracks, the top 60 riders are within 15 seconds. If you’re not in your best condition and doing your best performance you’re going to be nowhere near that.”

“Back in the early 2000s you’d win a race by 3, 4 or 5 seconds. It was masterclass to do that, and it really doesn’t happen too often these days.”
“You had 2.5 seconds to 5th place in the last round of the 2021 World Cup, so there is no real room to be unprepared or unfit for a World Cup race now.”

With 18 years between his first and most recent World Championship title wins, Greg has clearly mastered the passing of time, but how?

“I’ve had to adapt and change. Things have adjusted over the years. Equipment has definitely moved the needle, and having to learn to ride the (evolving) styles of bikes has been important. The mechanics know how to set them up to ride right - even faster than you can learn to ride them.”

Naturally, his famous fitness regime has also been a huge part of surviving this evolution. “Training and fitness have also been a big part of it. Coming from a background of riding cross-country and doing the training that I do has allowed me to be the best I can, and to stay at the sharp end of things.”

“But, you know, with that also comes adjustment of training. Downhill has got a lot closer so the training has had to adjust to that, too - and to keep up with the young guys who bring new dynamics to it. That (tweaking of training) has been a big part of it.” 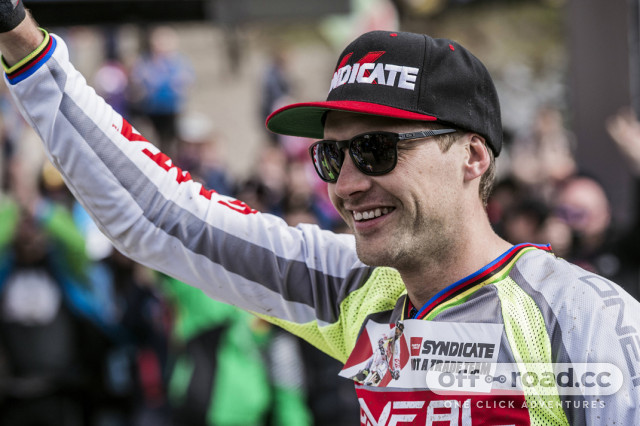 With so many career victories to call on you may think selecting a standout and defining moment for his reign would be tough. “Winning the World Championship in 2021 was by far my favourite win of my career. Who would have thought at 39 years old, and on that gnarly track, that I would have walked away with the rainbow stripes.”

The big wheel of regret

There have been a fair few crashes and lows during his lengthy career and, yet, his biggest regret comes in the form of equipment choice.

“Probably (my biggest regret is) not pushing for the 29-inch wheel sooner, the size of the bikes made such a difference to someone my hight that I wish I had for my entire career.”

Crashing into the future 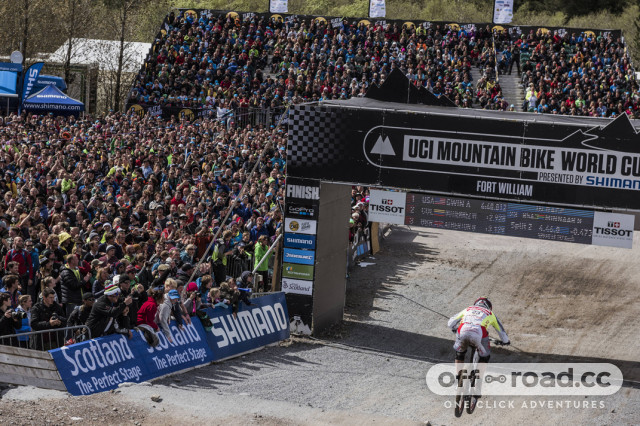 In 2022, Greg was unable to defend his rainbow stripes after suffering a very bad crash in the practice sessions for the Val di Sole World Cup in September, after which he was helicoptered to hospital with three fractured vertebrae.

“Yeah, 2022 didn't end very well, but I'm really stoked to be able to recover 100%. I've just been seven weeks in a neck brace and now I have four more weeks of rehabbing and mobility to go, so I’m hoping to be back on the bike before Christmas.”

Is this the end of the rainbow dream?

Will the crash force a premature end to the career of Africa’s greatest-ever mountain bike racer?

“Yeah, I'm not gonna be racing if I'm unable to be able to perform at my best.”
However, Greg has come back from life-threatening injuries in the past, and he has no intention of bowing out on a low “It's a tough one, I don't know exactly when I wanna stop, but right now I'm still in full race mode.”