Skip to main content
Log In Register
In mountain biking terms, Hans Rey is one of the indisputable greats of the sport having raced everything from trials and downhill to slalom racing  - this is his story 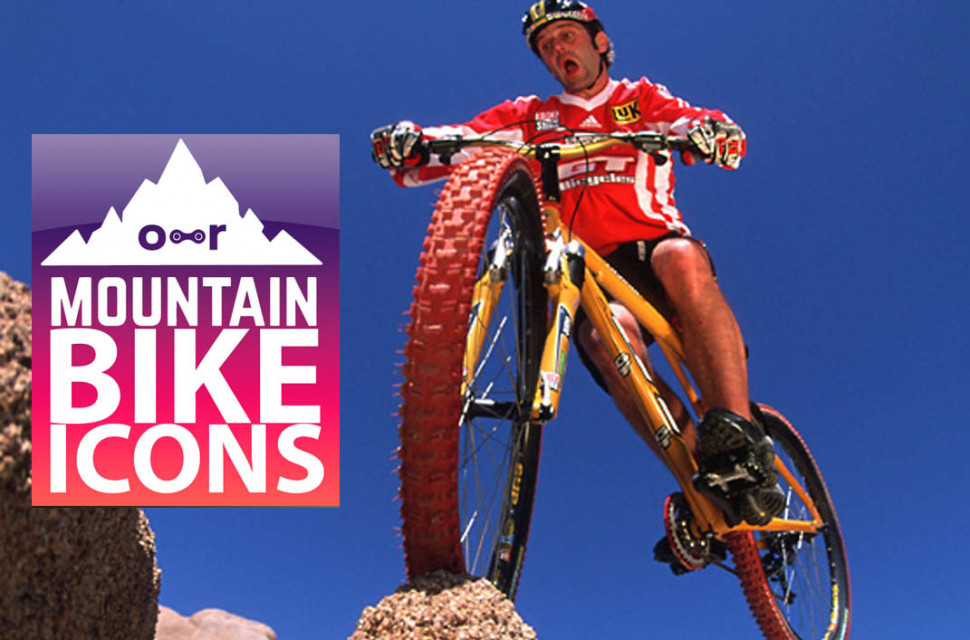 Made in Germany, branded in Switzerland and shaped in America, Hansjorg Rey is one of, if not the most iconic figure ever in mountain biking. And, what’s more, he’s been at the forefront of the sport and has graced the covers of the biggest magazines in the world from the very conception of mountain biking right through until today.

In the time before mountain biking

Starting out as a trials rider in the pre-mountain bike era, Hans was always something of an innovator, a pioneer and an entrepreneur who did things on his own terms - and little has changed over the decades.

Like many 1970s kids, Hans got started with bikes early in life. “We had a moto trials club in my German hometown of Emmendingen, and my friends and I wanted to be like them and so we converted our bikes to ride trials. This was before there were BMXs or MTBs in Europe. My first bike is now on display at the Shimano Museum in Osaka.”

Ironically, just recently, Hans visited Osaka and reunited with the bike that was to shape the rest of his life. As a rising young trials star, Hans became World Champion in the 1980s, and then he started taking his show on the road, performing trials shows wherever he could see a window of opportunity to wheelie through.

Hans was doing well on the 80s European trials circuit before he was introduced to a new and bigger-wheeled bike known as a mountain bike. At that time, like many of us, we aspired to the American dream, and this newfound sport was potentially his shot at chasing that dream. So he packed his bags and went west in search of fame and fortune, both of which he eventually found in differing degrees.

“I remember seeing an article in a German bicycle magazine about them (you know, mountain bikes) around 1985. I wasn’t too much interested, as I was into riding 20-inch trial bikes. A few years later, Kevin Norton - an American trials rider who came to Europe told me about a new sport in America called mountain biking.

He mentioned everyone competed on 26-inch bikes and that in a mountain bike competition everybody had to do XC, DH and trials on the same bike. He invited me to America to show them what real trials were all about. The rest is history.”

Had he not taken that great leap westwards we’d probably never of heard the name Hans Rey in mountain biking. “Absolutely not. I would have gone to school and university and taken a regular job and probably stopped riding and competing.” 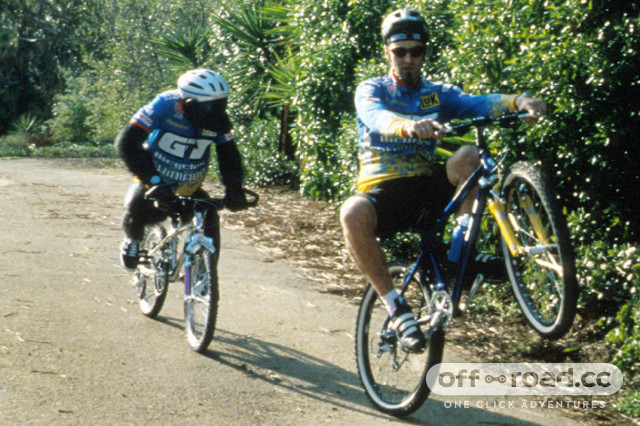 Hans Rey showing his skills with a wheelie, by Steve Thomas

Following the westward trail to California in search of a new life was something early pioneers and the brave had done way back in the days of the waggon trains and, although the mode of transport and opportunities have changed over the decades, it’s still a trail many follow in search of fame and fortune.

In the case of Hans, it also came with a change of identity - he became a mountain biker, but how did that transition and realisation of his new identity happen? “Once I came to America, I was lucky enough to get connected with one of the oldest MTB clubs in the world, the Laguna RADS. They made me into a real mountain biker! Soon after this, I started to also race some downhill and slalom events, and then I took my trials skills from 20-inch to 26-inch mountain bikes.”

It didn’t take long for his skills to gain attention. He kept raising his own bar and the sport duly followed what became known as the ‘No Way’. “After a while, I wanted to show my extreme skills. I called it ‘extreme mountain biking'. This was still 4-5 years before freeride riding even started. I did some videos, and they went viral on VHS all over the world, which was long before the internet even existed.”

Those early videos made by Hans were treasured and watched by early mountain bikers and are arguably what sealed his place as a true legend of mountain biking. “I was inducted into the Mountain bike Hall of Fame in 1999. I am a mountain biker - and I’m still a trials rider.”

Topped with his famous blonde ponytail and aboard his synonymous GT bikes, the fame of Hans Rey spread well beyond mountain biking. During that time, he performed at the 1996 Atlanta Olympic Games opening ceremony, starred in a Hollywood TV series and mixed it with the biggest showbiz stars in the world - but always remained an approachable icon.

The older generation often refers to the late 80s-early 90s as the golden era of mountain biking; it was a time of liberty and innovation. What was it like being such a key figure in those early days? “It was really cool, especially looking back at it now. Nobody knew what to expect, nobody had any expectations. We just had fun and everything started to snowball - new bikes and designs, new riders, new riding techniques, and more events. The boom was about to happen and it did happen in the early 90s (I came to America in 1987).” 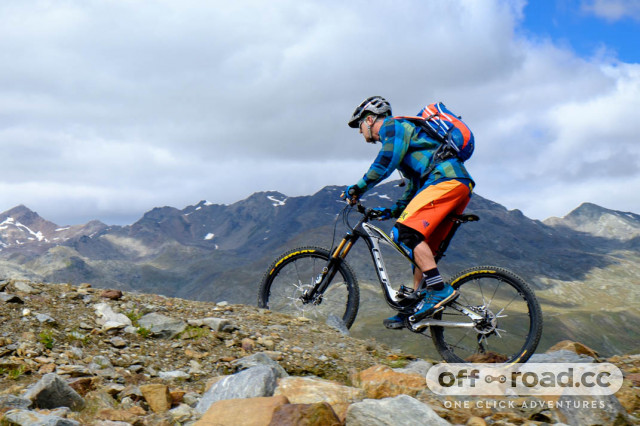 For almost his entire career - which is still ongoing - Hans has had the same core sponsors and GT Bikes has been with him since the start. Despite having been involved with the sport for longer than most current stars have been alive, not to mention the drastic changes in media and the internet, Hans has still remained relevant and popular.

“I could entertain and show my skills, even outside of competitions - in trial shows, with TV appearances, photoshoots. I also understood marketing, and I always made sure I gave my sponsors value for their investment.”

The long ride of Hans Rey

What has been the secret to the longevity of Hans Rey? “I still have fun and it is also a job for me. I love to inspire. Yes, it is necessary to adjust and to move with the times, and I have always embraced new trends and new riders (even if they were much better than me). It is cool to be part of the evolution of this sport and the industry and to see how big it has become and how many subcultures it now has.

We would have never dreamt this up in our wildest dreams. I am very happy to see where the following generations have taken this sport, and I’m honoured to be a small part of it all still.” 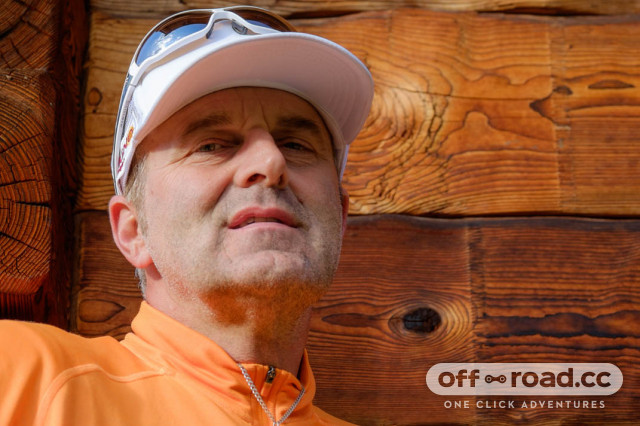 Portrait of a true icon of mountain biking, Hans Rey, by Hans Rey

What have been the standout moments during his career of trials and adventures? “There are so many, and so many incredible experiences and moments over the years. It’s hard to pinpoint one or a few; Kilimanjaro was probably my hardest adventure (which he did with Danny MacAskill). Kili was it for me, it is the Everest for bikers.”

“The Iceland Traverse (with Steve Peat), and also exploring all these new purpose-built bike destinations around the world. I’m also really fond of the e-bike movement now, it opens up so many new opportunities, not just for me.”

“I have met presidents and performed at the Olympic Games but perhaps, meeting and influencing so many people to ride bikes has been my proudest legacy.”

When walls came tumbling down

Despite his success, Hans still has a few regrets and one that still niggles him. “There are not many regrets or low points. Of course, I’ve had a few injuries (not too bad on the grand scale of things), but I do regret not flying to Berlin when the Wall came down in 1989. I should have gone there and ridden on top of it.” 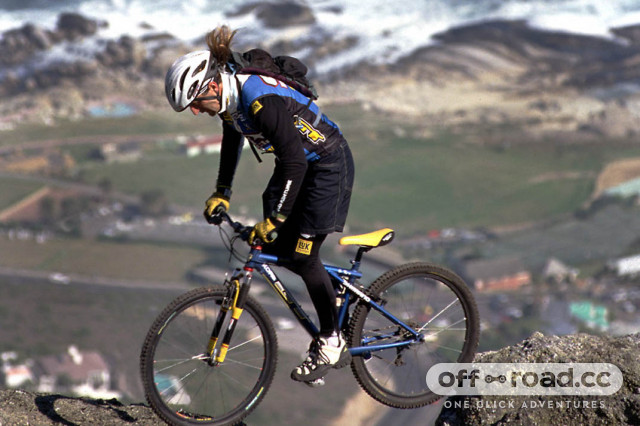 Hans Rey competing in a trials ride, by Hans Rey

He doesn’t want to get a real job

When Hans started his career it would have seemed absurd to him, and to society in general, that he would still be out there living large and jumping through the highest hoops of mountain biking fame - yet he still is, and that stands as an inspiration to all of us. But what comes next? “I’m not sure. I’ve always said since I was 16 years old, that I will go on for another 2-3 years. I’m now 56, and I don’t see any reason to stop now. I have the best job in the world. I hope I can manage to be a part of it for a few more years. I don’t want to get a real job.”