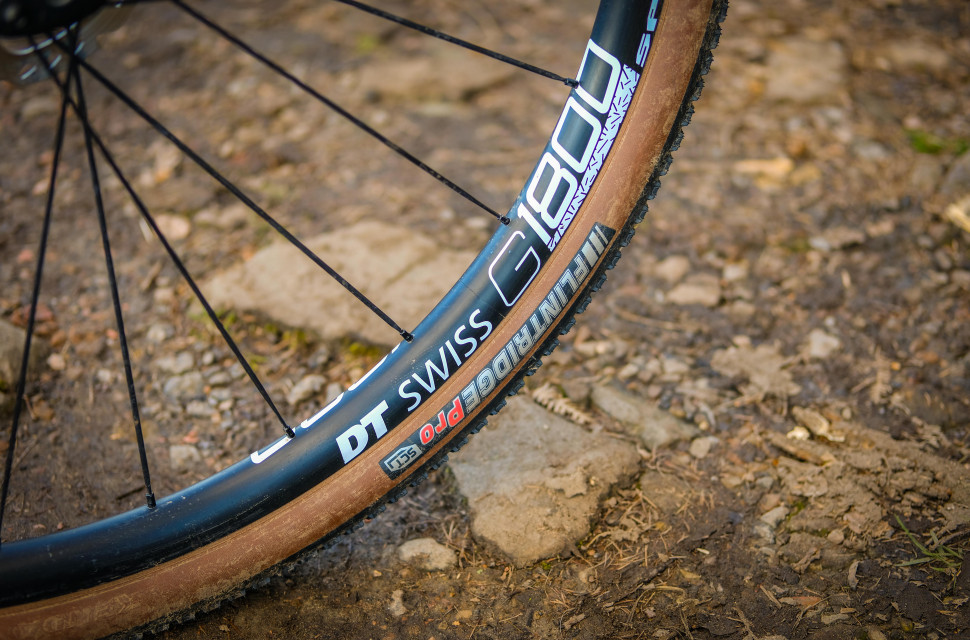 The DT Swiss G 1800 Spline 25 is a bargain gravel wheelset with decent performance and premium looks. The hub has a slow pick up and the set is not especially light, but £350 for a disc-compatible, aero-spoked, thru-axle set of wheels with rims good for 42mm tyres is pretty compelling.

The Spline 25 is an entry-level wheelset that doesn't look out of place on mid-level gravel and adventure builds. The rear features DT Swiss' own 370 hub, which uses a three-pawl mechanism much like that on their M 1900 mountain bike wheels.

The M 1900 wheelset notably needed a bearing replaced just three months into the test – I'm glad to say the G 1800 wheels have had no such issues. Granted, they've probably seen less mud and grit, but the longevity of bearings seems good. 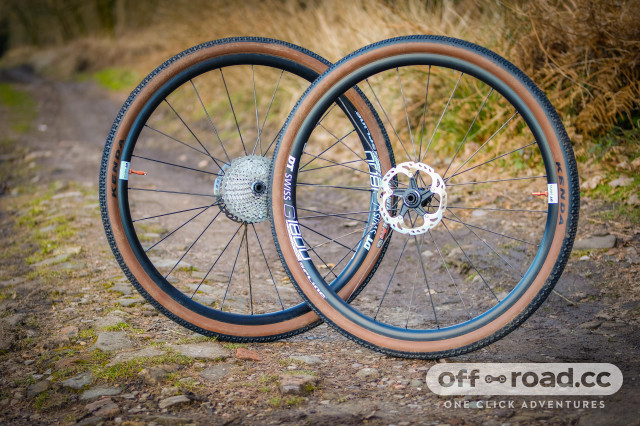 The rim is a decent width at 24mm internal (28mm external), and 25mm deep. It's an ideal width for 40mm tyres, and about average for gravel wheels aiming to run 35-42mm. 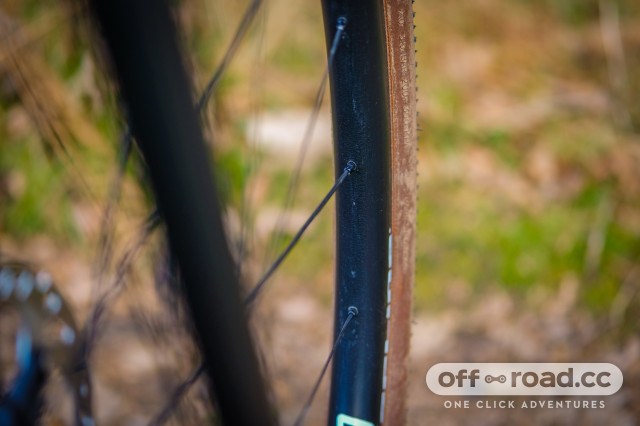 The DT Aero Comp Wide straight-pull spokes are lighter than regular j-bend spokes for the same given strength, and give a premium look. There are issues with straight-pull spokes though – it can be tougher to find spares in a bike shop in emergency, and working on them is harder. You may have to remove two or three spokes in order to get a broken one, and all those, of course, need re-lacing. 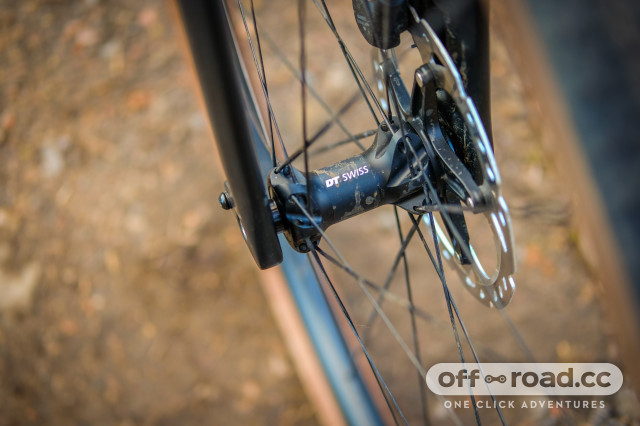 The spokes are a flat-bladed too, which again can cause issues if you plan to do your own maintenance. They need to be held with a tool during adjustment, to keep the blade flat whilst you rotate the nipple. If the nipple seizes, you end up with a spiralled and useless spoke...

However, the likelihood of problems actually occuring is low – I didn't need to so much as touch these wheels during the test. Nor have I had any spoke-bending problems with similar designs whilst testing for off-road.cc. 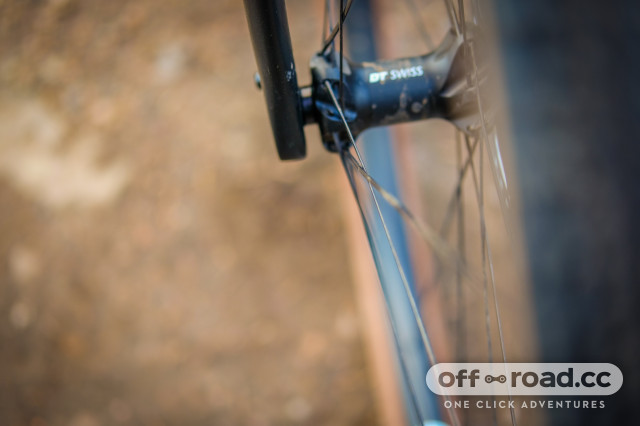 My wheels were set up for centre lock discs (6 bolt adapter included) with thru-axles front and rear (100mm/142mm) and a Shimano freehub. The G 1800 comes with both front and rear quick release converters too, and there's even a 650B version if you prefer. 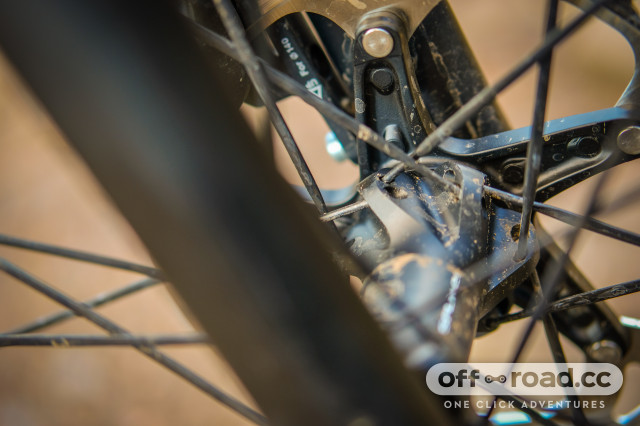 The tubeless-ready rims took a set of Kenda Flintridge Pro tyres with ease, and even running as low as 25psi didn't phase them. There isn't a dent in either them. 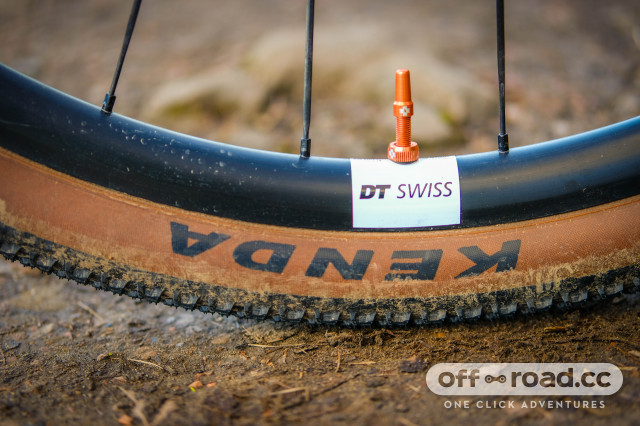 Paired with my Ribble CGR Ti longterm test bike, the G 1800 wheelset proved a solid partner both on the road and off. They do feel a little heavy at 1,895g, but you'd struggle to get lighter ones at this price. Chris at Madison (distributor of DT Swiss) says "the slight porkiness is somewhat offset by their very generous 130 KG weight limit, with the popularity of gravel bikes for bike packing and light touring many people will going well over the 100KG system weight that many other wheels marketed for gravel top out at, all our gravel and cross clincher wheels are rated to 130KG". The hub pick up is a tad slow, too, but for less pacey gravel and road rides where you're constantly spinning, it's not much of an issue.

These are a great choice for those of you building a gravel bike from scratch, and may make a reasonable upgrade too – though if you're looking for a big step up, then look instead at the lighter, though more expensive G 1600 wheelset.

If you want to know more about all the different DT Swiss road and gravel wheels in general, road.cc has a great guide here.