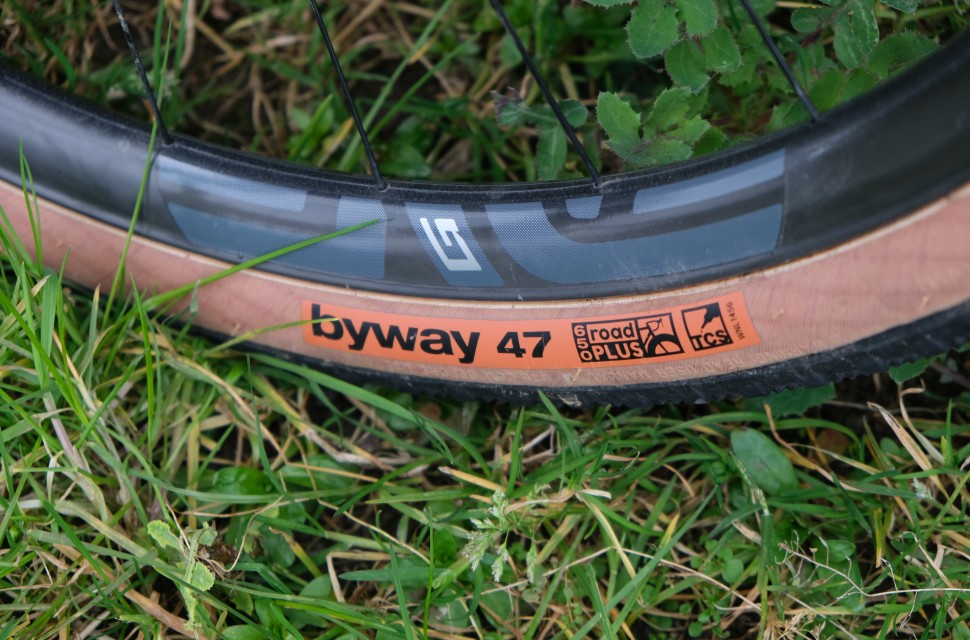 For exploring the “road less travelled” as it is often called, WTB’s Byway is a decent choice providing as it does fast rolling speed on road and hardpack gravel, with only wet grass and mud finding the limits of a slick tyre for off-road duties.

The smaller 650b wheelsize has become very popular on adventure bikes and it’s easy to see why. The smaller wheel enables a bigger volume tyre to be enlisted providing hugely improved cushioning when riding along badly surfaced roads or venturing onto gravel tracks and dirt paths.

WTB hit the market early with its original Horizon - you can read my review here - providing stacks of comfort and off-road capability. There’s only so far you can push a slick tyre on dirt and gravel, so WTB took the Horizon and added a meaty shoulder tread pattern to provide a bit more cornering traction when you’re drifting through the bends. 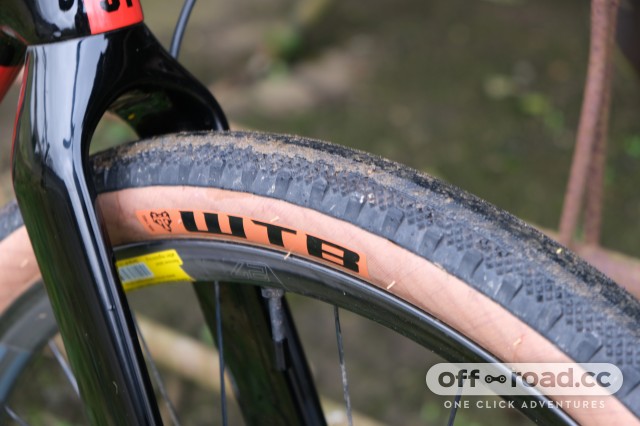 WTB calls it a dirt-focused Road Plus” tyre and that’s a pretty decent description. It’s right at home on the road with the slick central channel providing low rolling resistance, allowing you to zip along country lanes with minimum speed penalty compared to a more conventional 700c road tyre setup. Only if you really try and push on does the aero and weight penalty become noticeable but keep the speed modest and it feels fast.

Anyone that wants to massively increase comfort on any terrain, be it road or gravel tracks. 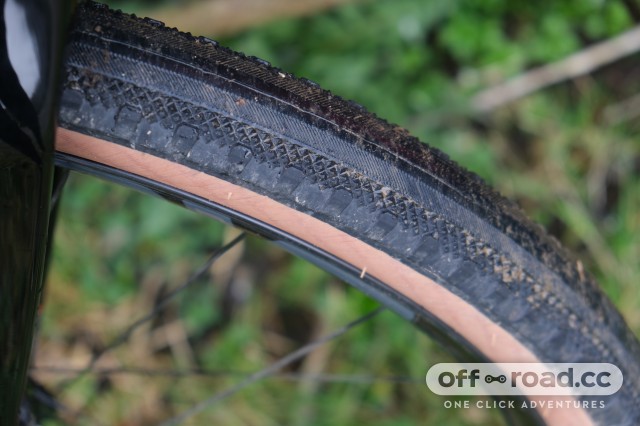 The addition of the meatier shoulder tread pattern is intended to let you further explore any road that isn’t paved compared to the Horizon. On gravel, dirt and grass the tyre provides plenty of speed and there’s more cornering security compared to the totally slick Horizon.

That tyre could feel pretty sketchy at high speeds on loose surfaces, the Byway does elevate just how fast and far you can push the bike into turns. It can still get a little tasty close to the limit though, there’s only so far you can push a slick tyre. Those low profile shoulder knobs do let you take your bike further into the wilderness than you could with the Horizons but get too ambitious and you’ll be quickly reminded you’re still basically riding a fat slick tyre. 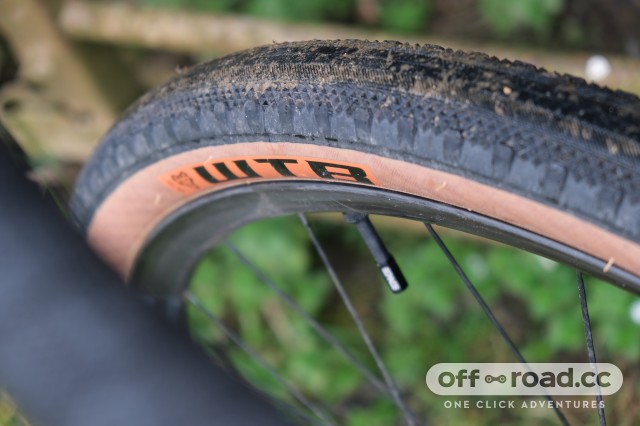 I was reminded of this on a very windy ride across the Brecon Beacons a while ago, with long sections of damp grass and slippery mud resulting in hilarious wheelspin drift mayhem! I got through it all with a few dabs, but there are going to be occasions like this when a conventional treaded gravel tyre is going to be a better choice.

Riding along dry dirt is where the tyre really shines. It soaks up vibrations providing a lovely smooth ride, isolating your body from the shocks generated from hitting holes and roots or stones. I regularly start from my house on quiet country lanes before diverting along the many bridleways and byways around my part of the world, and it’s this sort of riding that the Byway copes with well.

I’d probably steer clear of this tyre for off-road use during the winter months, at least here in the UK where mud is a factor, and save for drier trails where you can get away with a slick tyre.

Tyre pressure is important in making the most of the huge volume. I urge you to experiment and invest in a decent pressure gauge. For my body weight and for mixed surface riding I generally ran about 35-45psi, a bit less at the front and more at the back. Even on pure road rides, this low pressure didn’t present any issues regarding speed and rolling resistance.

Is it for you?

If you want a fast tyre with huge comfort that can go almost anywhere, provided you keep away from anything slippery, the Byway a very capable and appealing tyre.

At 531g it’s no featherweight, but there’s at least a negligible weight penalty over the slicker Horizon (522g) and a bit more confidence in being able to push the tyre further and faster.

Tubeless benefits have quickly migrated from mountain biking to gravel bikes, allowing lower pressures to be used for extra comfort and traction with minimum risk of flatting.

The Byway is a tubeless tyre and is a complete doddle to fit, I tested on several different wheels including ENVE and Hunt models. The tyre inflated with a regular track pump and air retention is very good with only occasional topping up needed. 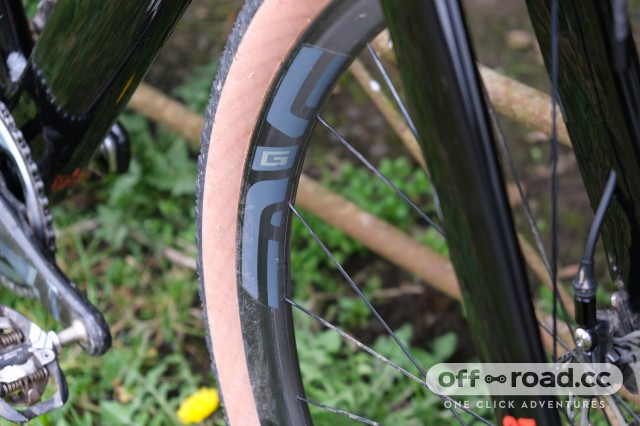 Durability is an impressive trait of the tyre. I’ve hammered these tyres through the woods and over the rocky hills and as of yet not suffered a flat tyre, and there’s not a hint of damage to the tyre, either on the tread or sidewall.

Our most dirt-centric Road Plus tire yet, the Byway Road Plus tire delivers supple plus-size traction and smooth riding characteristics farther into the dirt. Staying true to its road usage, a slick centerline borders angular hatching to keep everything smooth on sections of pavement. Intermediate, diamond-shaped peaks provide steadfast traction under power, while consistent and more substantial side knobs extend down the side to protect it against ill-intentioned rocks or gashes while exploring new areas. With the same overall diameter as a 700 x 30mm road tire, Road Plus provides the option for two different riding experiences with the same endurance road bike. The Byway Road Plus tire allows riders to find comfort on remote gravel roads without being slowed down on the pavement required to reach them.

At £43 it's not insanely expensive

Provides good speed and traction on road and dry and hardpack trails, but steer clear of mud and damp grass

I love the smoothness the big volume low-pressure setup provides, and to have a tyre that is good on the road and not bad on gravel and dirt

Could be a bit lighter and you're best of steering clear of mud, which rules out UK winter riding really

A very capable tyre for road and light off-road use providing it's dry, with superb comfort and few downsides