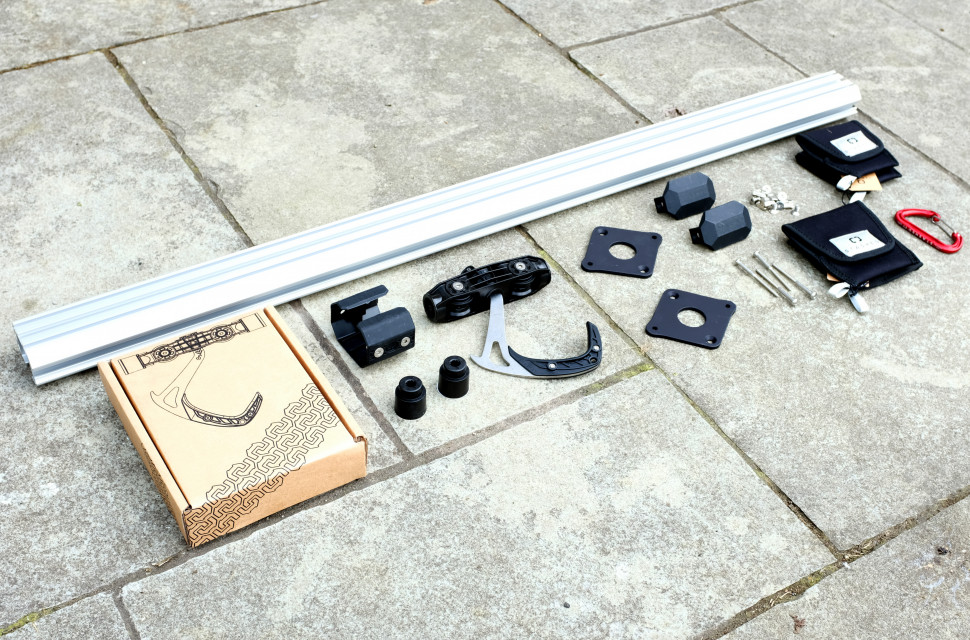 The Stashed Spacerail offers an efficient way to store bikes in a secure and accessible way. Using a well-designed hook and rail system, it offers convenience, security and the ability to store multiple bikes neatly while freeing up floor space. But this bike storage solution comes at a considerable cost. 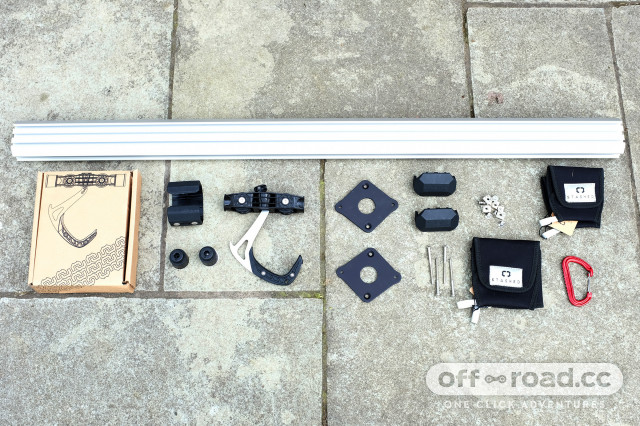 The Stashed Spacerail Storage System is a more advanced version of a simple hook with many additional advantages. The system has a main beam that uses hooks that can be moved back and forth to allow for the storage of all types of bikes. 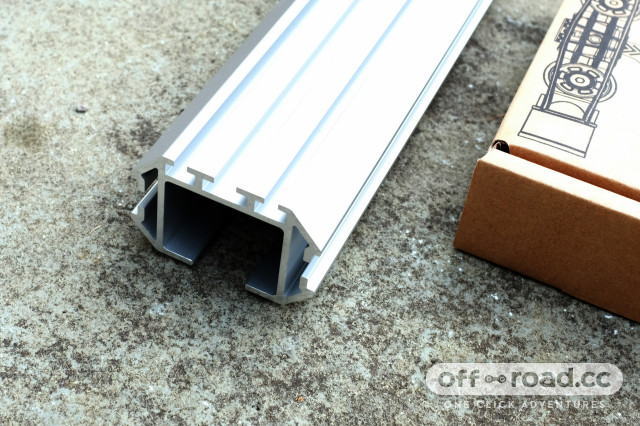 The main beam is made from extruded 6063 T6 Aluminium, and at 1196mm long it can support up to 120kg, with each hook capable of holding 30kg. The system is a simple idea employing hooks that remain static when loaded (pulled down under a bike's weight) and then when they are unweighted, they can move along the rail. The hooks can also rotate, allowing bikes to be closer together and moved aside when one is required. They can take up to a 3” tyre with ease, I got a 2.8” on with no issues. 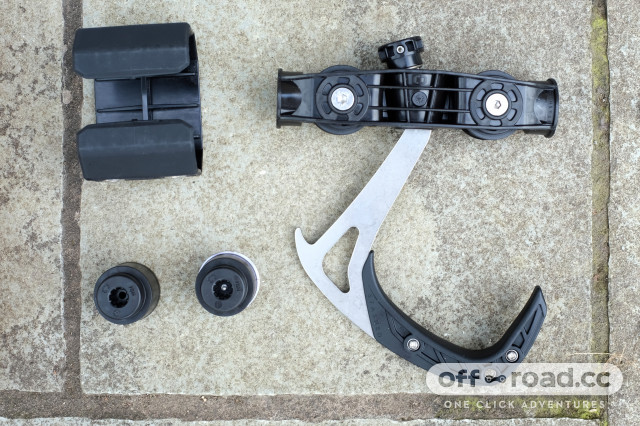 The beam is held in place using stainless steel plates that screw into a ceiling joist. If you have an angle ceiling, optional attachments are available. The supplied screws are solid, but I found the heads could have had deeper drill points, as some rounded a little, even on pre-drilled holes. Nylon is used in the finishing parts for the joins and end caps. The hooks are built using a mix of steel, nylon, and acetal. They have rollers to allow movement and are spring-loaded for the release. Every element feels solid, well made, and finished - it is also all made in the UK. Stashed says the Spacerail is made from the highest quality materials available, and it feels like that's pretty true.

I was also supplied with sets of pedal protectors. These cover your pedals with the aim to minimise scuffs and knocks as bikes are stored close to each other. They come in three sizes. There is a carabiner to clip them to when not in use but these come at an additional cost of £18-20 with an extra carabiner at £10. 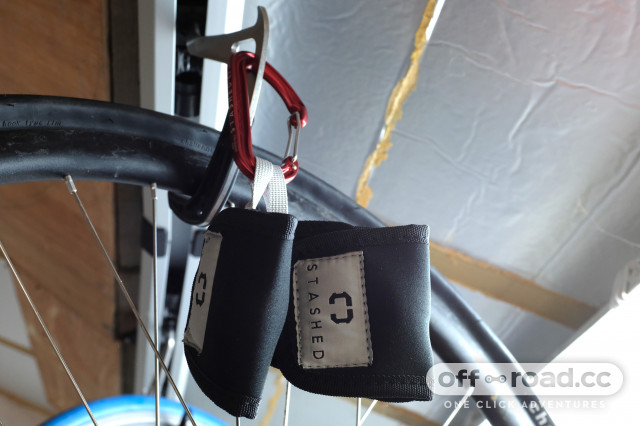 The crucial point for the Stashed Spacerail Storage System to work is secure attachment to joists, but when using the attachment plates (which can be positioned at any point along the actual beam), it is easy enough with some planning. It is worth looking at joist widths, and how you want the bikes to be positioned before starting installation. If you aren't happy with putting up shelves or similar DIY tasks, it’d be worth getting some help.

Stashed Spacerail Storage System - in use

I have several mountain and road bikes, plus a few kids' bikes to store, and despite best intentions, there is usually a bit of a fight to get at one bike when you want it. I have used hooks before, but they limit space and aren't used every time. What I liked about the Stashed Spacerail Storage System is that all the bikes can be hung in an area that perhaps two or three bikes would usually take up. The ability to move them left and right like a clothes rail means it’s simple to get at the one you want. 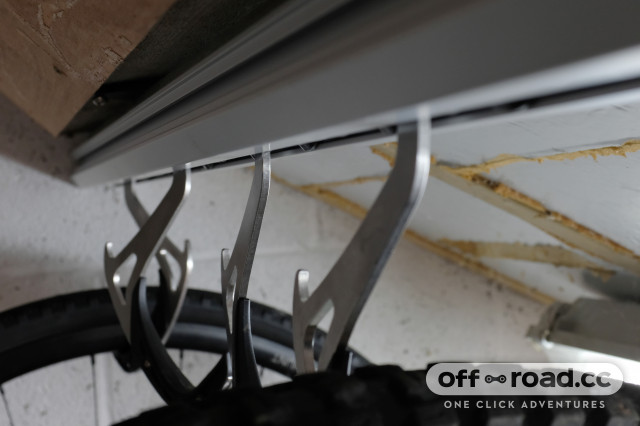 The rotating hook design is the key to space storage, as it allows the handlebars to fill the space behind the bike next to it. Flipping the bikes allows four bikes to one rail length, which also keeps the floor free if they are hung higher up. I’ve really liked using the Stashed Spacerail, it's a well-constructed piece of kit, with a lot of advantages. Perhaps one of the small downsides is that you need to put some extra effort into protecting bikes from each other when so close. 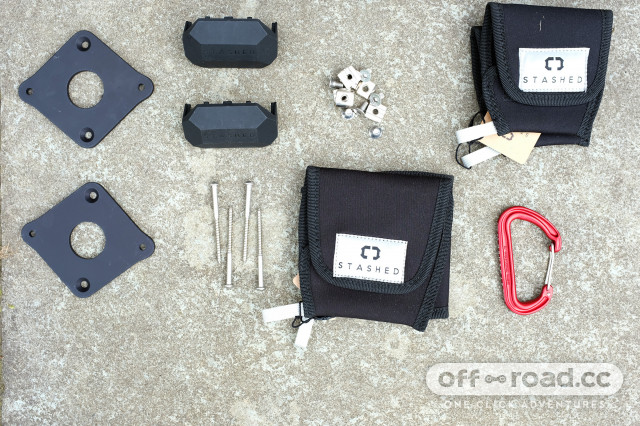 As mentioned before, there are pedal cover kits sold additionally which help minimise any scuffs and scratches, but to ensure this is avoided, having enough rail space to move bikes aside to remove them is important. If you are not fussed about scuffs, then it’s a little less important. It’s still an infinitely more refined, robust and better storage solution than static hooks. 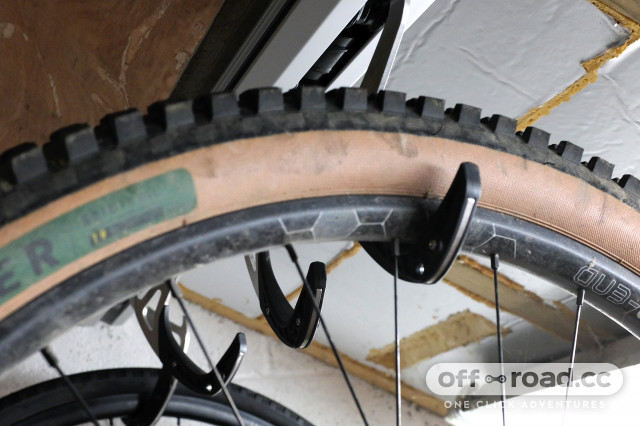 The Stashed Spacerail Storage System is an excellent product and a worthy investment. Perhaps the only downside is that it's more costly than a simple hook, but I think that is an unfair comparison as the Stashed Spacerail does the job so much better thanks to the ease of use and the space it saves. It does require you to lift your bike and place it on the hook, and with some e-mountain bikes being heavier, this is a consideration on whether it’ll be right for everyone.

Value-wise, the actual cost comes when you have a lot of bikes. The initial kit starts at £160 with just one hook, increasing with each hook added. I think you’d appreciate it the most when you have three or more bikes, as the more you have, the better you’ll utilise the system. It also looks super clean and nicely designed, which won’t look out of place inside the house if that’s where you install it. In theory, you can make the rail as long as you’d like too, as long as it’s supported correctly.

Simply put, the Stashed Spacerail makes bike storing easier - and it is absolutely worth the money. It’s saved space, and with some simple DIY skills, it is easy to install. If you ride bikes frequently and use different ones all the time, it’s even more useful. In terms of value, it is undoubtedly pricey but it delivers a versatile, functional storage option that's well worth it. 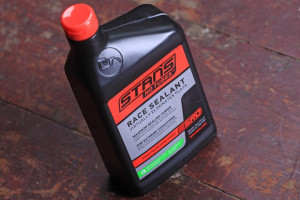 The Stashed Spacerail Storage System is a hook and rail that allows multiple bike storage in a smaller space - it works perfectly, and solves storage problems cleanly and effectively.

All the parts are well made, and considered - it feels like a very well thought out product right out of the box (which is also nicely considered).

Very well made and designed.

Works exactly as intended, the hooks roll smoothly and the mechanism holds them firm when you are loading and unloading bikes.

It has shown zero signs of wear, and would appear to function for a considerable time.

With the high quality and design, there is a cost - the Stashed Spacerail Storage System is in my opinion, vastly better than a static cheap hook, but it is undeniably a lot more expensive.

It works flawlessly and I found nothing to complain about with the function.

Super easy to use, stores bikes in an efficient way.

The price is a lot for one hook and rail - better value if you buy more hooks in the kit.

Yes, if they have multiple bikes that need storing efficiently, or even if they don't.

The Stashed Spacerail Storage System is a brilliant storage solution - all the positives about space being used effectively, plus freeing up floor space, and bikes easy to get to are worthy, but the price is high. I don't feel the extra addition of pedal covers is great value, and would rather use an old rag or similar to cover any potential contact issues between bikes. As a standalone product, the hooks and rail are superb and well made.

Great innovation but a prime example of something which needs to be acquired by a larger manufacturer to cut costs. Feedback Sports or Thule should be all over this, it's just too expensive as it stands, particularly at £60 a hook. If you need it then it probably means you've got 3-4 bikes to store so the cost really adds up. I'm interested to know if it will take a bike with full length guards.

I don't have this system, but do have a DIY rail and hook system that uses the exact same principle. I have no issue storing my fully mudguarded bike along side mine and my families other bikes.

I find an old winter\hiking sock, with the foot turned into the leg bit makes a wonderful pedal guard.

My good bike is allowed to be locked to the end of the bed.

Nice but—and I know it's all too easy to jump on the 'how much?!?' bangwagon—if you're after this kinda setup consider looking at catering/butchers supplies and you can pick up a rail and meat hook system for a fraction of the price that'll do the job just as well.

Great innovation but a prime example of something which needs to be acquired by a larger manufacturer to cut costs. Feedback Sports or Thule should be all over this, it's just too expensive as it stands, particularly at £60 a hook. If you need it then it probably means you've got 3-4 bikes to store so the cost really adds up. I'm interested to know if it will take a bike with full length guards.