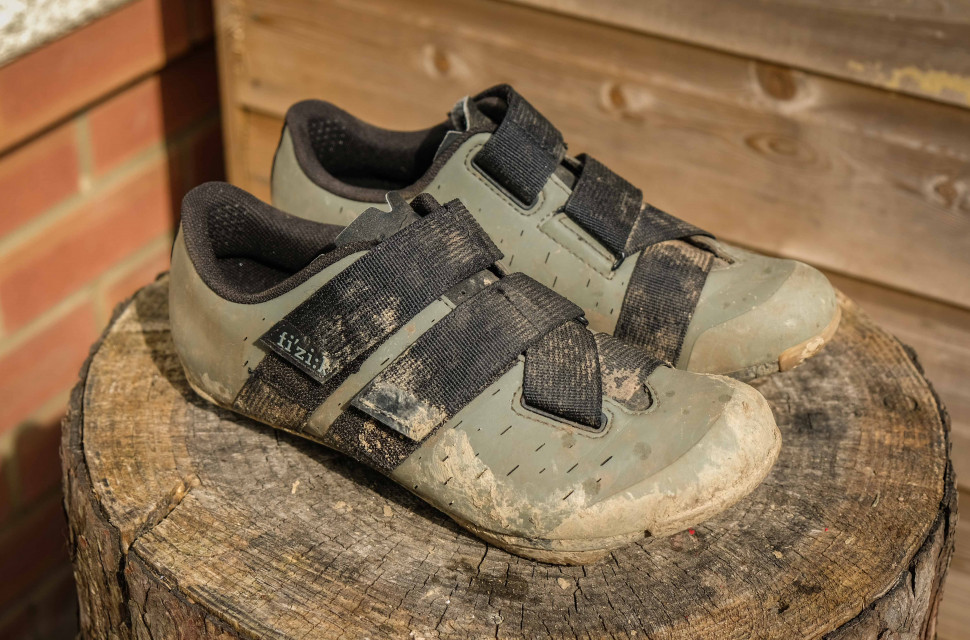 The Fizik Terra Powerstrap X4 is an off-road SPD and clipless shoe aimed squarely at the gravel rider. It's relatively stiff, comfy and fends off the weather very well indeed, and while the sole is not the best for muddy hiking, it's a stylish option. It will, no doubt, pique the interest of the fashion-conscious graveller.

The 'Terra' denotes this as an off-road shoe, while 'Powerstrap X4' means it has the fancy velcro closure seen elsewhere in the Fizik range. It's gravel-focused, but crosses over equally well into cross-country mountain biking – or even casual road riding, if you prefer two-bolt SPDs.

The Powerstrap X4 gets a clean smooth outer, and the small ventilation holes do a great job of letting out heat without letting in a draft – it's a great cool weather shoe. It's not waterproof, but the lack of mesh or other such ventilation over the toe means it's more weatherproof than you might think. 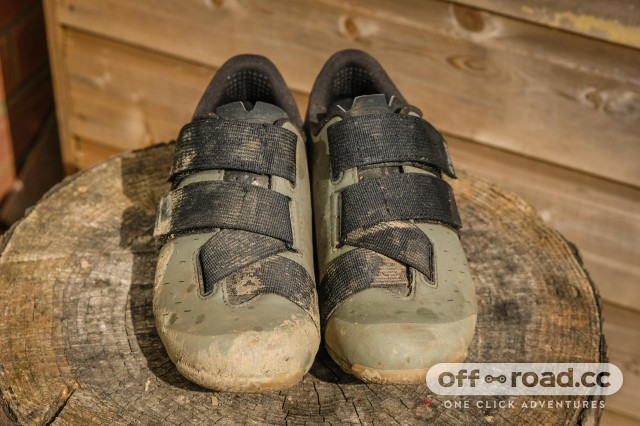 The straps zig-zag up the foot to distribute pressure evenly, and it's an effective design. I found them easy to overtighten at first, but go easy on the velcro – the upper is well-shaped, as is the heel, and it doesn't take much to keep everything secure and in place. 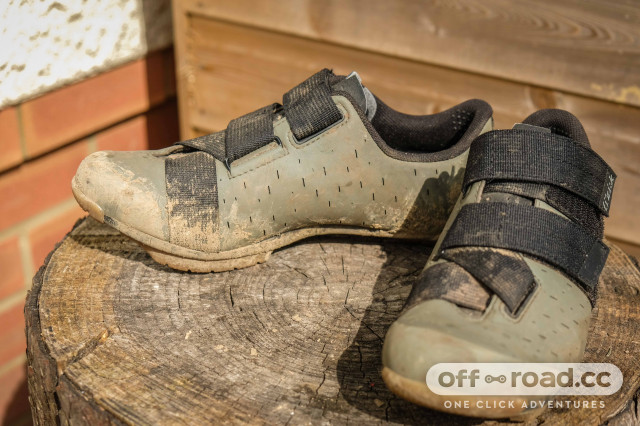 There's silicone print inside the heel, which helps too, and a neat little Velcro dot to hold the tongue in place so it doesn't move with your foot or slide to the side. 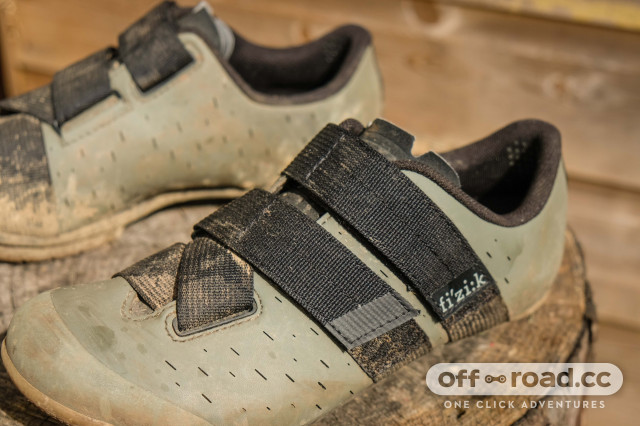 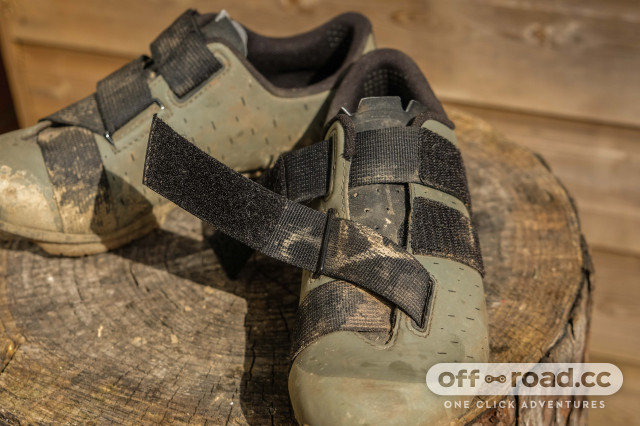 Fizik rates the sole at six, which means it's stiffer than the more mountain bike-orientated Terra Clima X2, yet less stiff than the carbon-soled Terra X5. I found it plenty for my gravel excursions, though full-on racers might find these shoes lacking in efficiency. 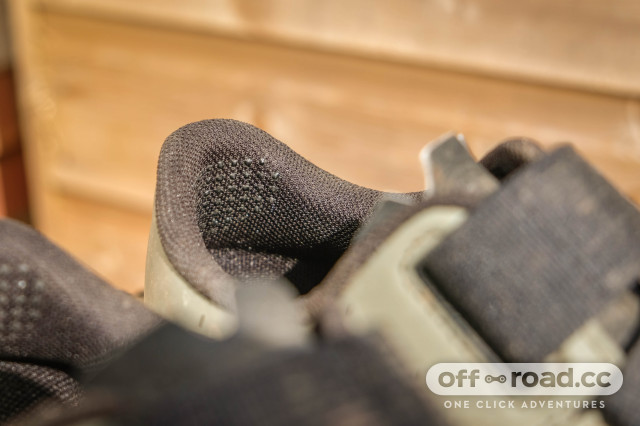 The tread is relatively smooth, bar the two main lugs on either side of the cleat – it's not a rugged pattern by any means, and not the best for rough-ground walking. There's no option to add studs, either, which is a shame. 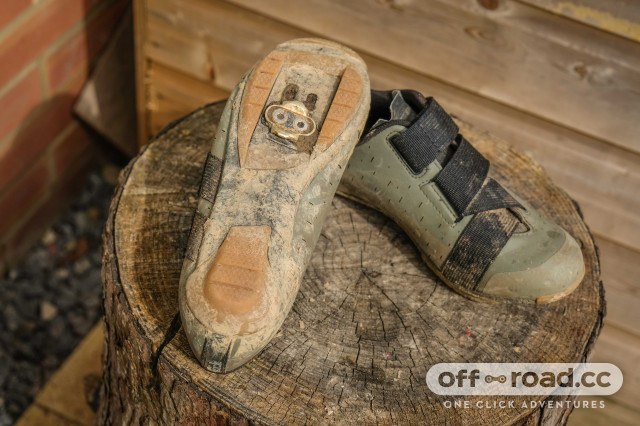 For walking in the dry though, it's comfy, with some give to allow a little flex of the foot. It's pretty hardy and substantial too – my size EU38s weighed in at 600g on the nose. That's heavier than similarly-priced Shimano XC7, but lighter than Scott's comparable offering. 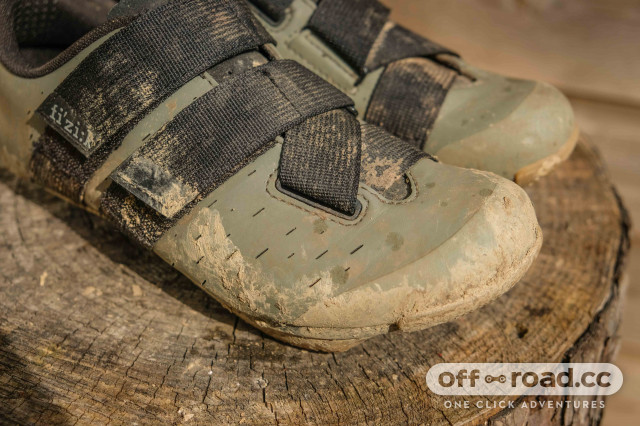 The fit is classic Fizik: narrow, but with plenty of toe room. Not so narrow it's uncomfortable or restrictive, mind you, nor so roomy at the toe that your feet can slip around. 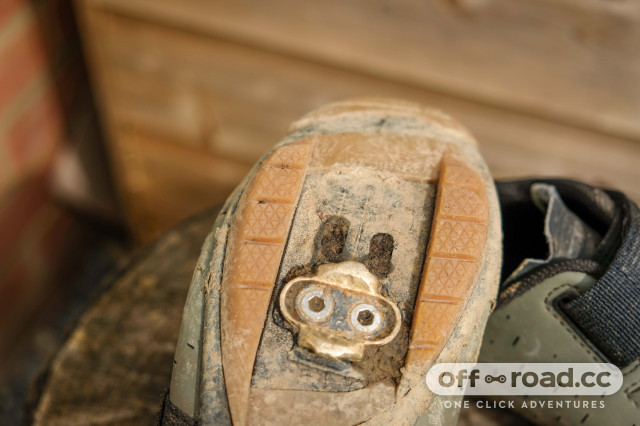 The Fizik Terra Powerstrap X4 is a solid choice of gravel shoe: comfy, decently water-resistent and pretty efficient, yet not so stiff you suffer vibrations or discomfort on longer rides. Racers should look elsewhere, but for the adventurous gravel rider, this shoe is simple to fasten, simple to clean and blessed with a sleek aesthetic.

At £150 they aren't cheap, and competitors such as the Scott MTB Comp Boa do the same job but cost less. I feel like you're paying for the style here, as much as out-and-out performance. Yes, the closure is better at distributing pressure than other velcro systems I've used, but it's no better than a Boa dial – which you get on the stiffer Terra X5 for exactly the same price.