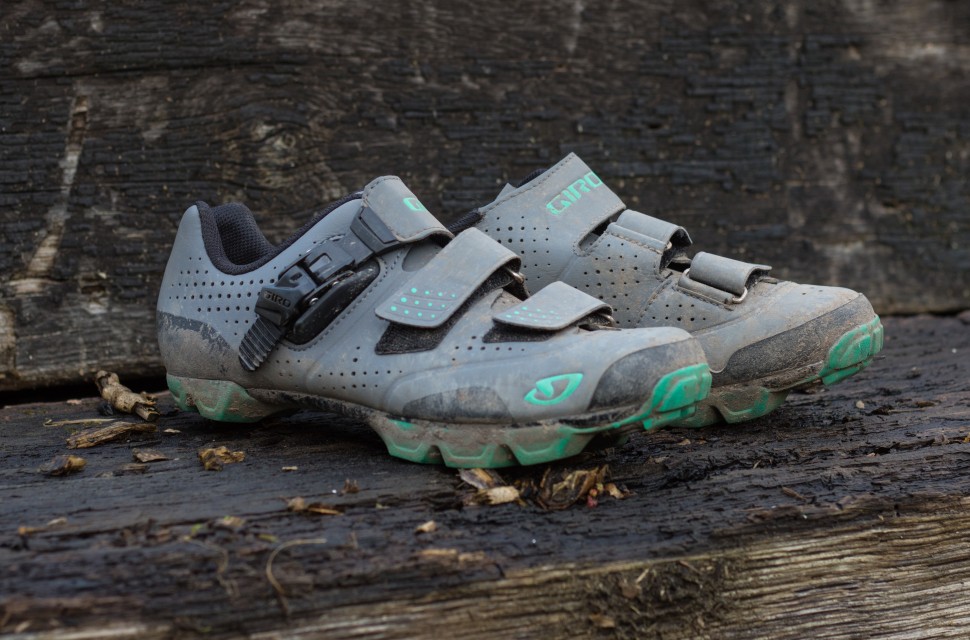 Rachael Wight
|
Feb 6 2018
|
Overall
Quality
Performance
Value
What's good?
What's not?
Buy if...
You are looking for a stiff shoe that will also help you hike up hills like a mountain goat

The Giro Manta R women’s trail shoes are a cross-country style of shoe with a stiff sole that also provides good walking grip. But a shallow fit and unwanted pressure on the top of the foot lets down what could be a great all-round shoe.

Giro say the Manta R’s have race-ready stiffness with trail-worthy traction (think mountain goat), which they certainly do have in spades. These are stiffer than their sibling, the all-mountain Montara’s, although similar in price and styling. The Manta R’s are a good looking pair of shoes, Giro has a sure thing going on with the aesthetic design of most of its gear.

The upper of the Manta R’s features a tried and tested ratchet buckle and two Velcro straps, it’s an easy system to use. The upper Velcro strap is offset towards the middle of the foot to help spread the load. Despite this when slipping into the Manta’s I found them consistently hard to adjust to a comfortable position. Firstly, the top portion of the upper buckle slipped through at the attachment (see picture) which meant I had to push it home whilst simultaneously doing up the shoe. Secondly, the middle Velcro strap needed multiple adjustments to alleviate pressure being exerted across the top of the foot, something that if present meant discomfort and on a few rare occasions pins and needles in my toes whilst pedalling. I had to leave the middle Velcro looser than I’d have liked despite the offset, it was a hard job to adjust correctly whilst keeping the foot secure in the shoe too. 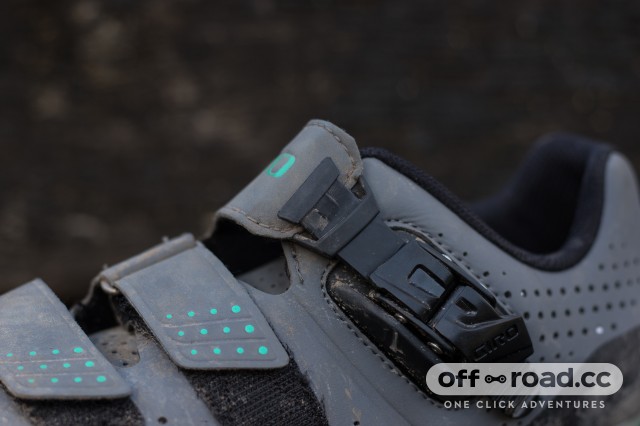 The shoes are relatively slim and this shallow nature extends to the rear too where the heel cup isn’t all that deep leaving you with a less supported or protected feeling than you might get in other shoes. The Manta R’s are also a pretty narrow shoe, something I’ve found across the board with Giro women’s shoes, coming up on the small side I usually wear a EU 38 but opt for a 39 with this brand. 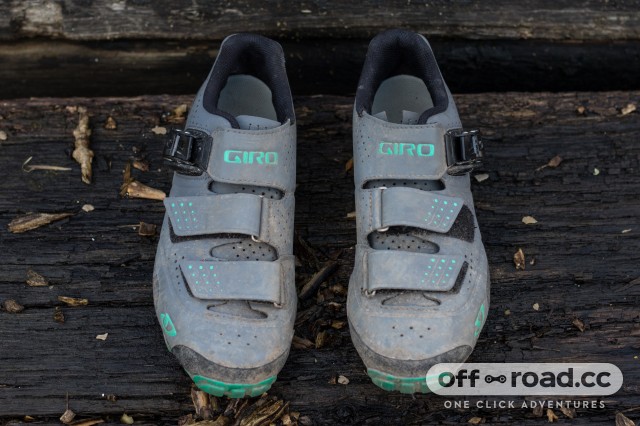 Giro uses a nylon and rubber co-moulded outsole for good durability and grip, something which I can't knock through testing, the shoes providing great traction over rocks and mud,  a factor attributed I to the rubber lugs on the sole. The rubber extends up to the toe box for extra reinforcement which is great, whilst these look like a cross-country shoe they’ve got credentials to make them a study all-rounder too. There’s also room to put studs in the toes for extra security when walking or running if cyclocross pain is your thing! 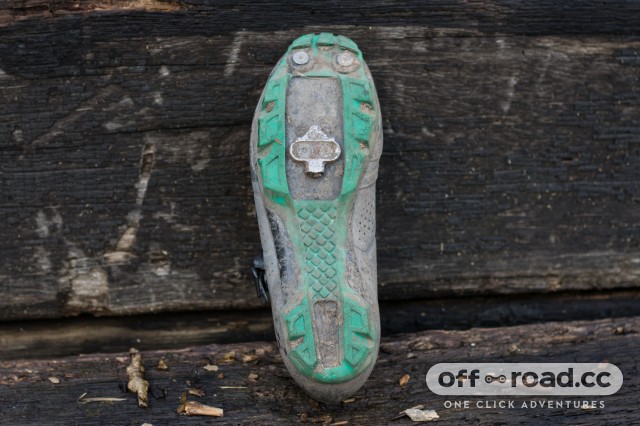 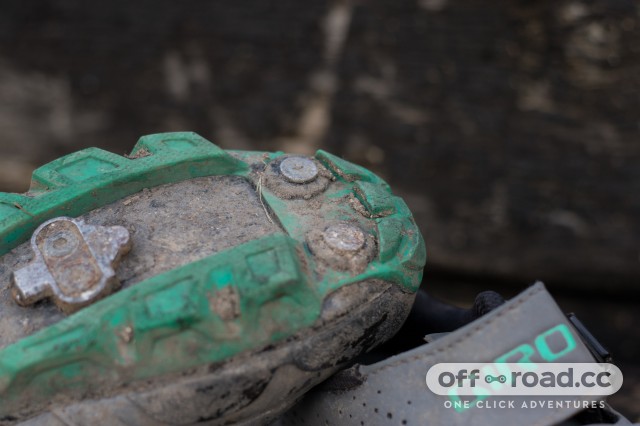 Where muck and grime are concerned the Manta’s do a fine job of fending it off whilst keeping the air flowing through ventilation holes dotted over the top and sides. They are light too – just 699g for the pair of size 39’s and that’s with Shimano cleats attached. The cleat recess allows for the cleat to be set right back in the shoe too if that’s your preference. 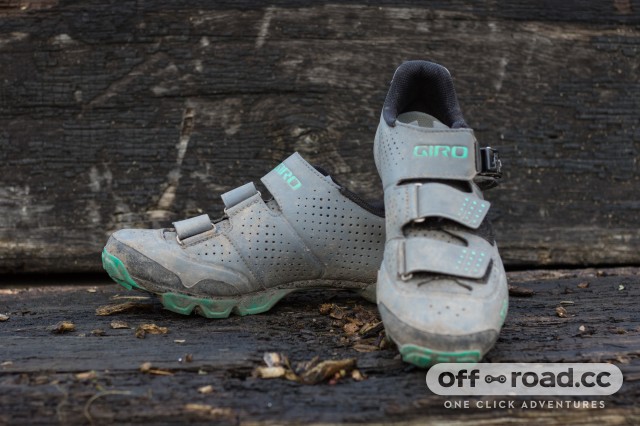 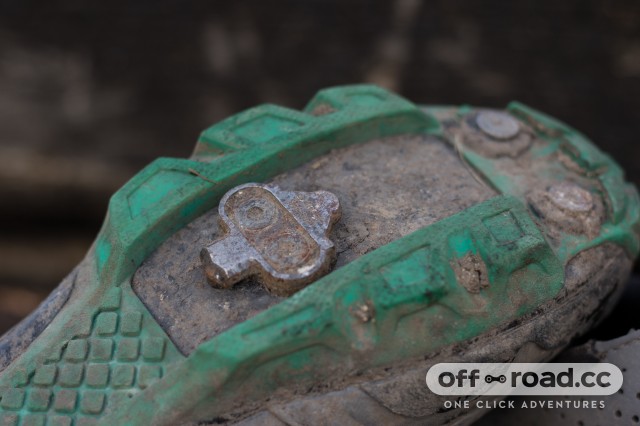 As I have already mentioned the Manta R’s are welcomingly stiff for a trail shoe, they are a pair of shoes I’d be happy to step into for a cross country race or a long distance gravel ride similarly. At £130 they are quite pricey though, there are similarly stiff shoes out there for less money. If you’ve got the right shaped feet and the Manta R’s fit you without too much trouble in adjusting the straps they’ll be a good shoe to put the power down efficiently and will suit a number of bike disciples from racing to gravel adventuring.

From Giro - The Manta™R features a nylon and rubber co-moulded outsole for exceptional durability and improved grip on rocks or roots. The reinforced toe box boasts a rubber toe-guard for improved durability yet comfort reigns supreme with a supple microfibre upper two straps and a micro-ratcheting buckle. Those features, combined with the stiff and efficient nylon outsole, create a shoe that rivals the performance of more expensive composite designs. Other highlights include aggressive lugs for improved traction, toe spike compatibility and a supportive EVA footbed.

Performance is good, I didn't get on with the shallow nature of the shoes and the velcro adjustment but every foot is different

No problems during testng

I found the velcro tabs hard to adjust, leaving a feeling of pressure over the top, middle of my foot until I got it right. Once adjusted comfort was good.

Pretty expensive given the fit problems

No - These don't suit my feet

Only if the fit is right.

Hi Graeme, you're right, I had the same problems Good to know I'm not the only one!

I have the men's version of these, some days you just can't get them comfy and the Velcro straps have to be on lose for some weird reason. I would agree they are shallow, had to take out the insole on one foot.