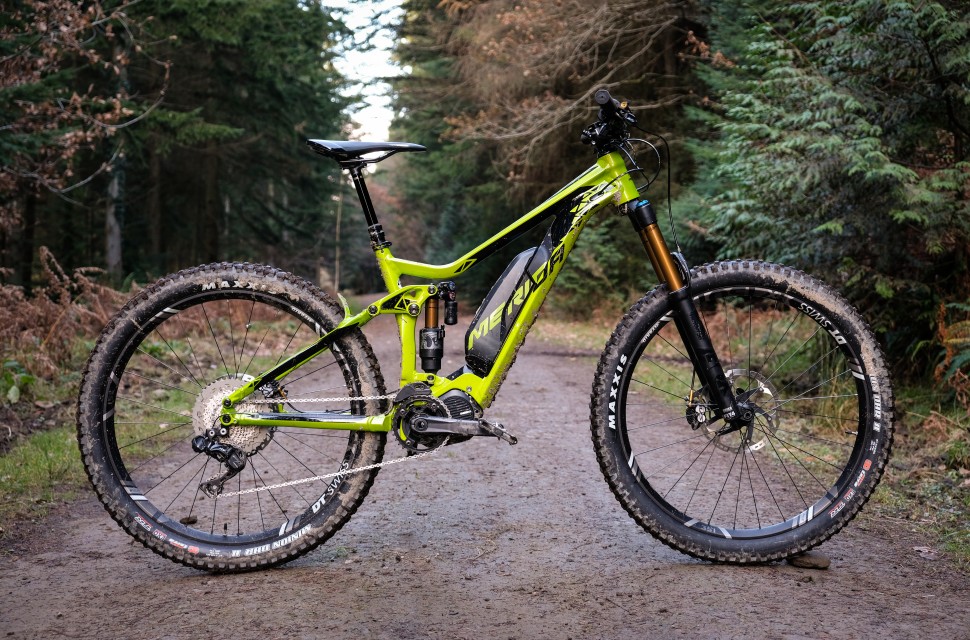 The Merida eOne-Sixty 900E is a superbly equipped e-bike with great suspension and playful characteristics. It’s a long travel electric mountain bike but it’s not as long and as slack as it could be. We’d like to see a really aggressive version in the future to take full advantage of the build and suspension qualities.

The Merida eOne-Sixty 900E we had on test was the range-topper and coming in at £6,350, it's certainly no lightweight on price. One look at the spec list, though, and it’s clear this bike goes heavy on the bling. There's Shimano XT Di2, A full Fox Factory shock setup and grippy Maxxis tyres to name a few parts. 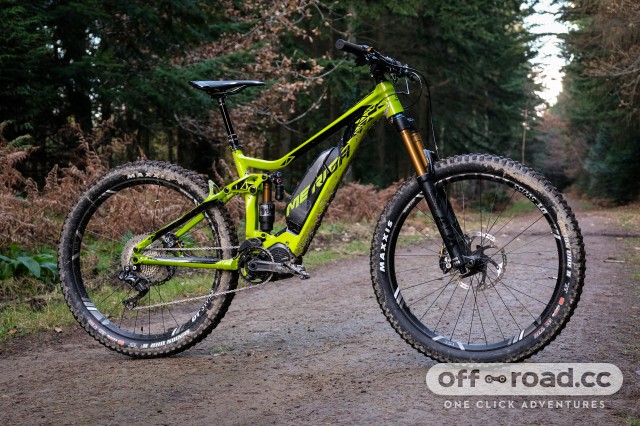 The eOne-Sixty uses an alloy frame with a Shimano Steps E8000 motor and 500Wh battery pack that is partially integrated into the downtube. It’s a look that divided opinion on the trail; a few of my mates raved about it but I just didn’t see it myself. 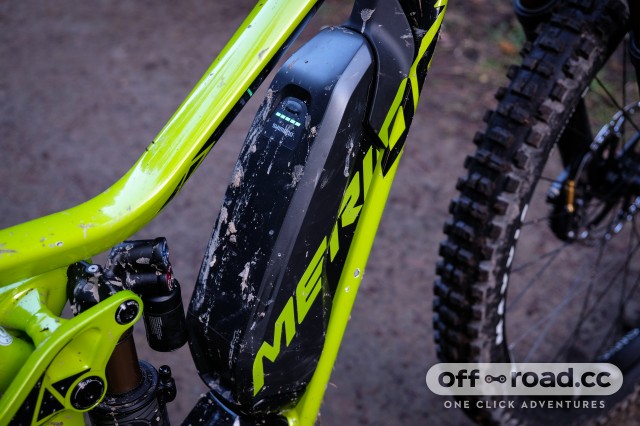 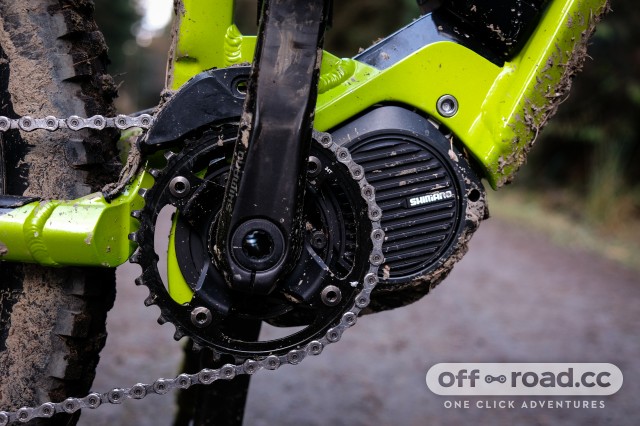 Moving through the spec of the eOne-Sixty 900E, the bike is equipped with a 160mm Fox 36 Factory E-bike fork. That means a fork with a reinforced chassis, a FIT 4 damper which they say is tuned to account for seated riding, steeper climbing and faster uphill speeds. 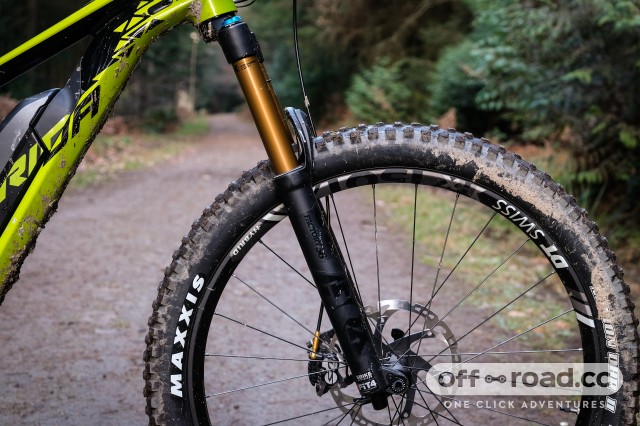 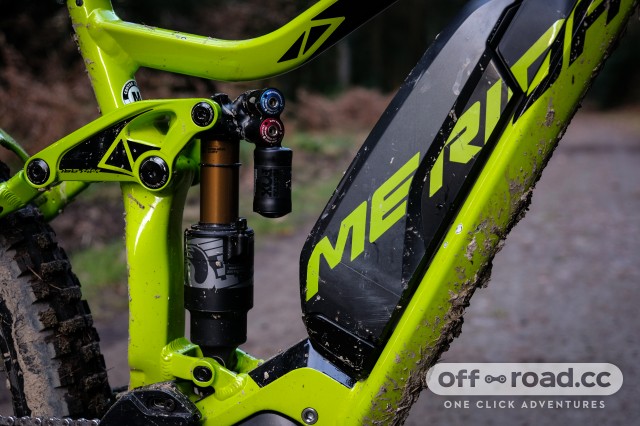 The shock is a Fox Factory Float X2 with all the bells and whistles in terms of adjustment, with high and low-speed compression and rebound adjustment on offer. The aforementioned Shimano XT Di2 sits pride of place up on the bars, with a nicely integrated control panel which simultaneously displays information regarding gears, motor power the battery level. If you are on the ball you’ll quickly notice that there is no Di2 battery indicator, the gears are powered by the main battery but in the event that you drink all the power there will be some saved to power the gears and get you home. The cassette is an 11-46T which is paired with a 34T chainring; plenty of gear with a motor to assist you. 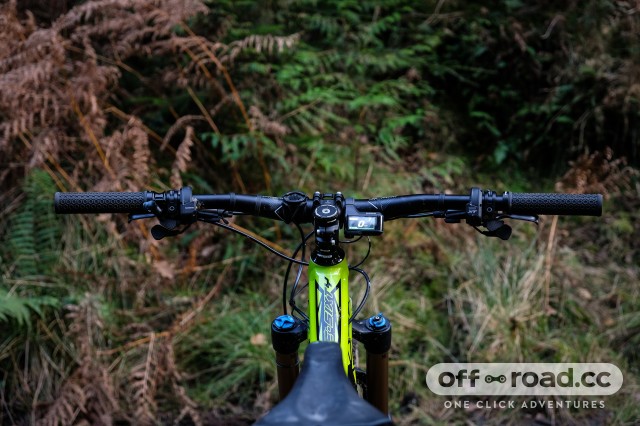 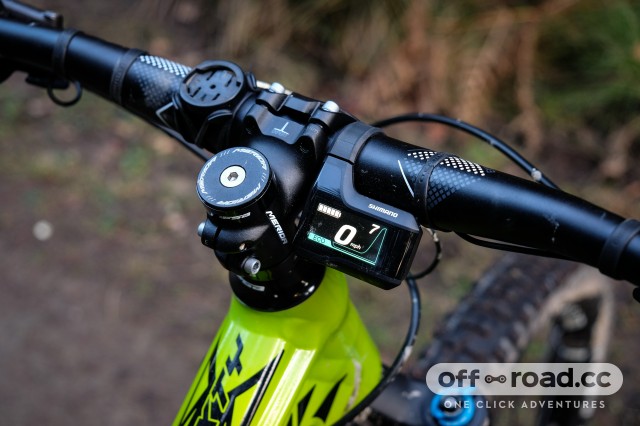 Brakes come care of Shimano with the uber-powerful Saint four-piston callipers taking control of the stopping with massive 203mm rotors front and rear. Buy a Merida eOne-Sixty 900E and you’ll be rolling on DT Swiss 1501 Spline One 35 rims with, as the name suggests, a nice and wide 35mm internal width rim. They're a good match for the 2.8” Maxxis tyres, of which you get Minion DHR II’s front and rear, both of which are 3C Maxx Terra EXO TR spec – nice and grippy but anyone heavier or more aggressive than me might put a hole in that rear tyre before too long and a thicker carcass here would be preferable. Also, the big 2.8" rubber tends to create an undamped feel which may not suit all riders. 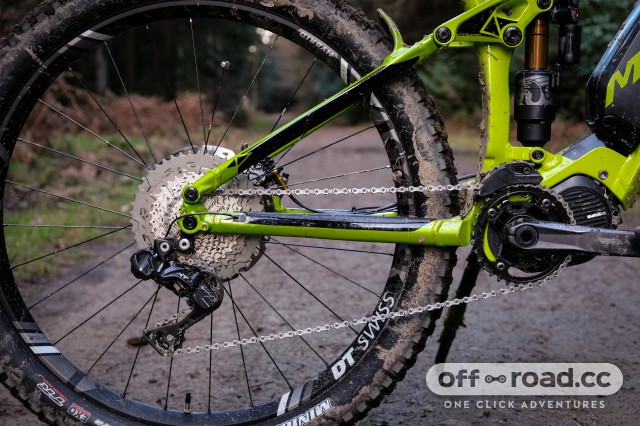 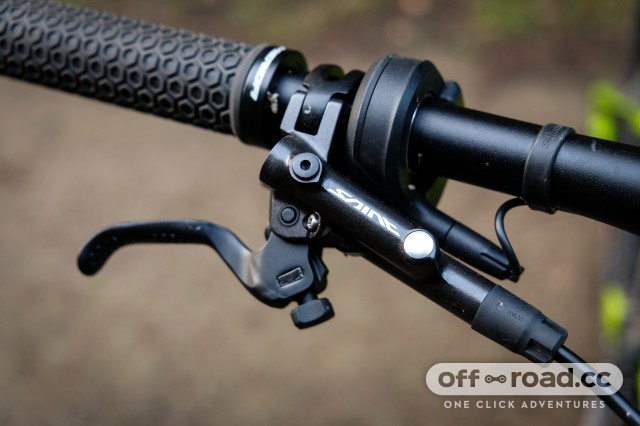 Elsewhere there is a 150mm Rockshox Reverb dropper which, due to the fact that the Shimano motor uses shifter paddle style levers to move through the power levels, gets an old plunger style remote on top of the bars. It’s not as nice to use as the new thumb lever but that’s a trade off for the intuitive and easy to reach motor controls.

The cockpit is a mostly Merida affair with Merida 780mm wide bars a short stem, Merida grips and Merida saddle. The whole lot weighs in at 22.5kg (49.6lbs), lighter than recent e-bikes we've tested with the Mondraker e-Crafty XR coming in at 25kg and also the Lapierre Overvolt iShimano 140mm e-bike which weighed 24.3kg, though both of those were large rather than medium builds. 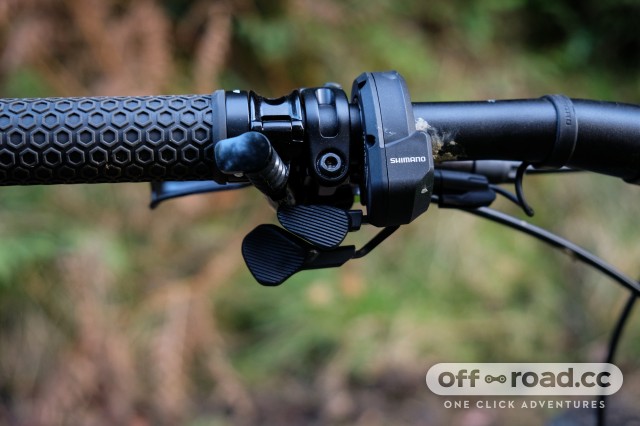 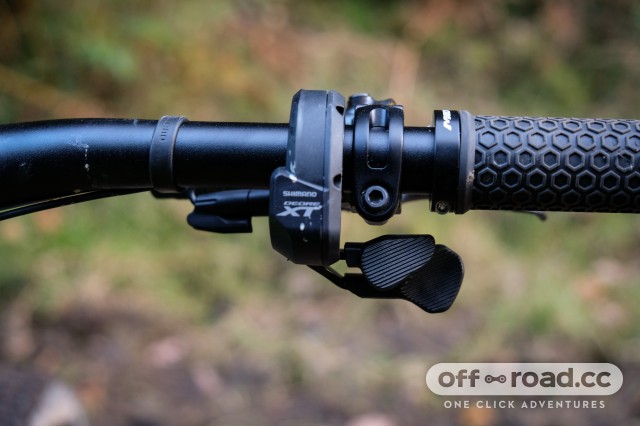 Going for a razz

Those components are a great start to what is a composed and quiet ride, everything worked just as it should and the familiarity of the shifter style levers employed to increase and decrease power level are intuitive to use. The Shimano Steps motor is plenty powerful enough, it dropped other e-bikes on the climbs but was no match for the more torquey brose unit on the new Specialized Turbo Levo.

The power is delivered smoothly and consistently with no surprising surges. In fact, the only niggle I found was the way that if you have pressure applied to the pedals when switching the motor unit on then the motor does not deliver power. When pressing the button to turn on you must not rest your foot on the pedal which is pretty annoying. 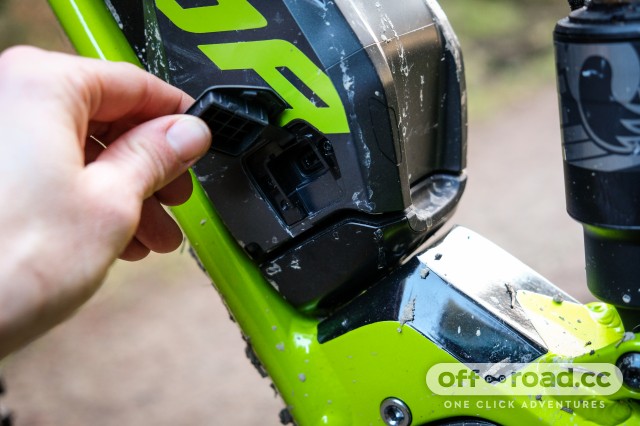 Climbing on the eOne-Sixty is, thanks to the smooth motor, an easy and comfy affair if you want to make it so, that said it’s easy to max out the speed and work hard. In terms of technical climbing, the large grippy tyres and supple suspension do a great job of keeping that rear end tracking over the lumps and bumps, continuing the smooth ride. The effective seat angle is 75 degrees. 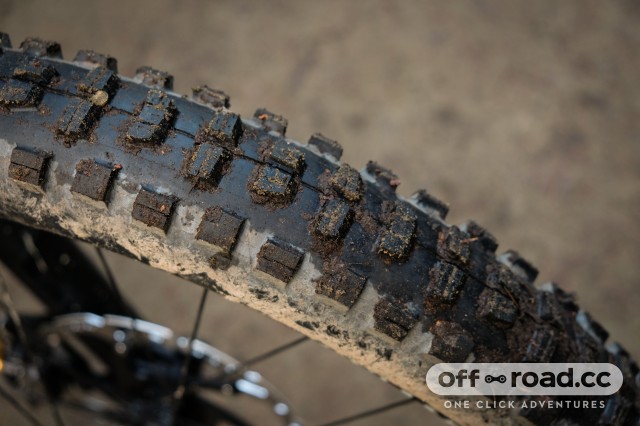 The suspension of the eOne-Sixty looks very similar to the regular One-Sixty but instead of the Float Link design on the One-Sixty (where a linkage driven single pivot acts with the shock floating between the rocker linkage and the swingarm) the eOne-Sixty is a simpler linkage driven single pivot with a pivot  on the seat stay above the rear axle and with the trunnion mount shock fixed in place near the downtube junction with the seat tube.

Regardless the suspension is every as bit supple and plush as the regular One-Sixty, something that can be attributed in part to the larger volume tyres and the weight of the bike helping the suspension work effectively, soaking up bumps rather than transmitting them to the rider. 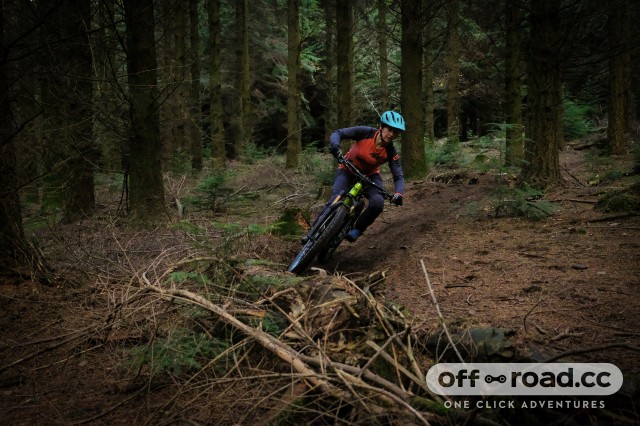 One thing that was immediately noticeable was that the use of the Shimano motor allows the Merida to keep relatively short chain stays at 439mm. This gives the bike a real playful feel, I’m a fan of long chain stays and I’d say that this length on the medium eOne-Sixty is a good match for a well balanced bike. It also has helped Merida keep the geometry of this bike in line with the regular One-Sixty (review here).

The main difference in geometry is the steeper head angle, 66.5 degrees on the e-bike versus 65.3 degrees on the regular version. Other measurements are similar, the e-bike has a slightly taller head tube and the wheelbase has been stretched out a little longer something that can mostly be attributed to 10mm longer chainstays. 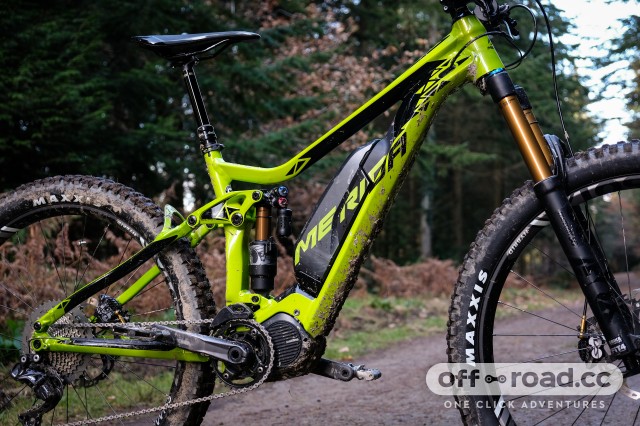 In terms of downhill ability, the eOne-Sixty 900E has plenty of it, its got grip by the shed load, the suspension is supportive yet supple and it's by far the most nimble e-mtb I’ve ridden so far. The trade-off here is the steep head angle, for a 160mm e-bike the 66.5 degree head angle is too steep to release the full potential of the bike. I longed for the bike to be slacker and more aggressively poised to really get to grips with some of the more gnarly and fast terrain local to me. Head angle gripes aside the Merida eOne-Sixty is a decently capable electric partner that has the grip and the suspension characteristics to take on some seriously burly terrain and take you effortlessly back to the top of the hill again for rounds 2, 3, 4 and so on… 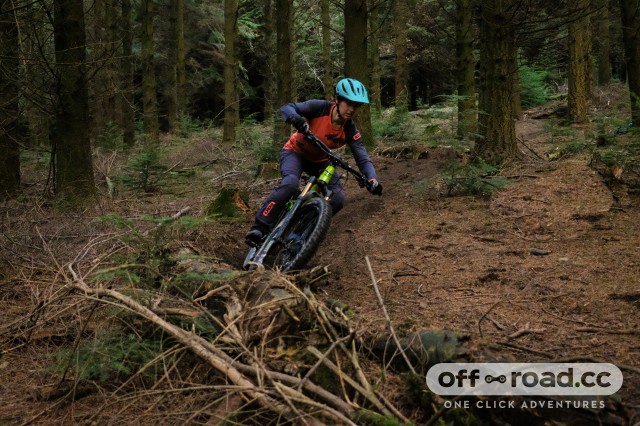 The battery life is plentiful on the Merida, I've ridden 1000m ascent days in a variety of modes and had juice left to get home. Of course, this is relative, I weigh 60kg with my riding kit on; a heavier rider would use more juice to get the same performance. A spare battery would be easy to carry if you so wished, the shorter, stumpier battery will fit easily in a large pack compared to the longer, skinnier power packs you see on some fully integrated bikes. 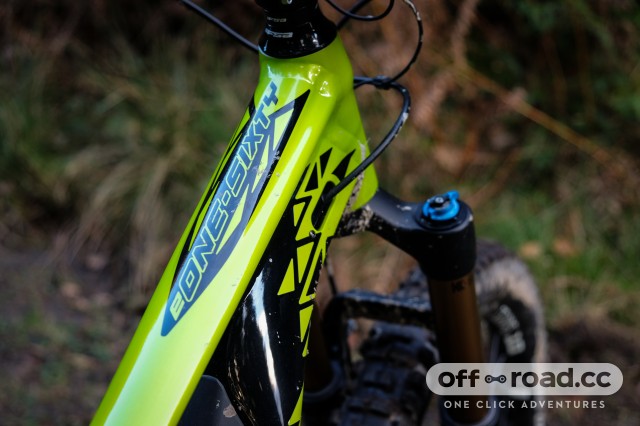 I enjoyed my time aboard the eOne-Sixty 900E, the high price tag is matched by a high-quality build and a composed ride. I'd like to see the bike a tag longer in geometry and slacker at the head angle for use on more technical terrain but if you've got the dollar and want something that will hit all manners of trails with ease, plenty of grip and a nimble ride then the Merida will be right up your street.