Skip to main content
Log In Register
Merida One-Sixty 600 review £2,500.00
A solid performer that exceeds expectations for a bike at this price 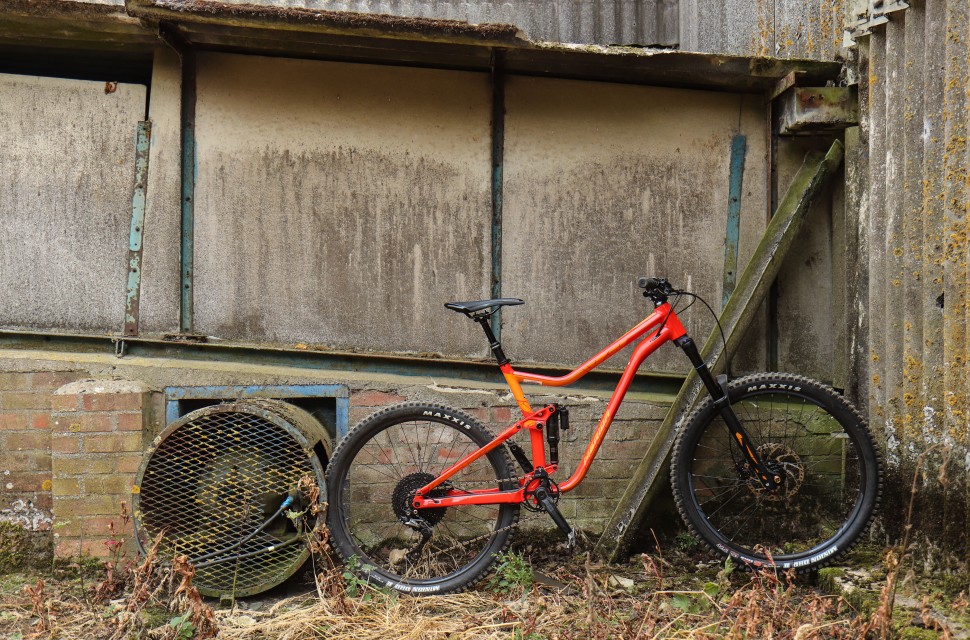 The One-Sixty 600 is the most affordable model in Merida’s 160mm travel range but there are no shortcuts. It’s packing some decent equipment and the performance is nothing short of impressive, though it could stand to lose a bit of weight if I’m being super critical and I’d love to see a compression/climb switch on the rear shock.

The One-Sixty goes back a few years but it has been completely redesigned, and Merida has tapped into a strong seam of design, suspension, geometry and aesthetics. All those good things are backed up by great specifications, as you’d expect from the buying power one of the world’s biggest bike brands must enjoy.

It provides 160mm rear wheel travel in a smart aluminium frame rolling on 27.5” wheels, propped up by a 170mm fork, with the sort of geometry numbers that don’t look out of place against other modern trail and enduro bikes vying for attention in this crowded marketplace. 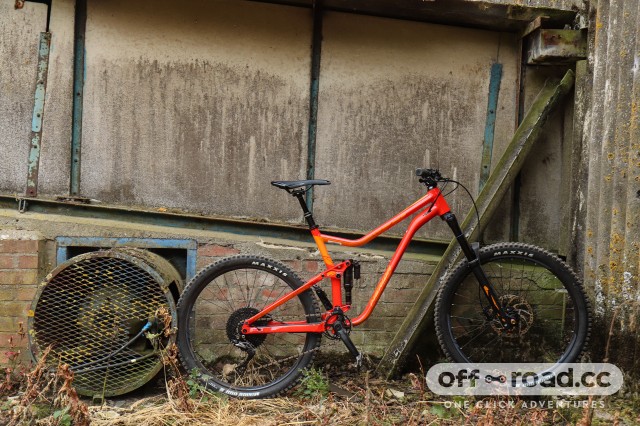 How does it ride then?

The geometry chart reveals the One-Sixty is thoroughly up to date and while it’s not as stretched as outliers Mondraker and Pole, the 474mm reach, 75-degree seat angle, 65.3-degree head angle, 1,223mm wheelbase and 430mm chainstays in a large frame are the right sorts of numbers to look for in a long travel mountain bike these days and ensures it compares well with key rivals. 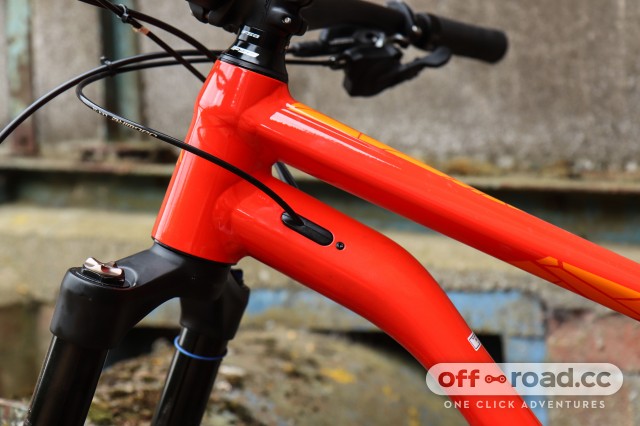 On the trail, those numbers translate into a playful bike with plenty of stability when cornering or tackling steep descents. It’s solid and secure at high speed, yet it’s not overly long that it can’t easily be hustled through tight turns and tree-lined singletrack.

Changes of direction come easily provided you’ve got a bit of pace behind your intentions, it’s decently agile. The weight certainly can be felt at slower speeds and when the gradient is working against you, but get onto the descents and the handling and plush suspension is a real highlight. 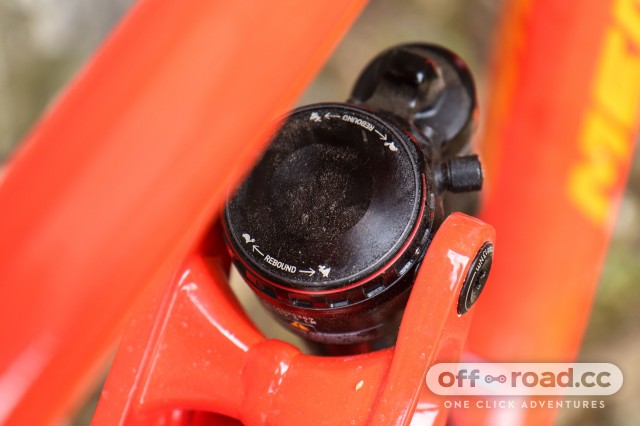 Let it get up to speed and point it straight down a trail and the suspension soaks everything up with aplomb. The rear suspensio, in particular,r is very supple and sensitive and just hoovers up the bumps and impacts. Set to about 23% it works well on the smaller bumps with sufficient progression to handle bottom outs.

It’s a little bobby on the climbs though, I’d love to see a compression or climb switch like you get on the more expensive Super Deluxe just to calm it down for longer climbs. The active suspension helps you keep momentum and traction when scrabbling up rooty climbs. 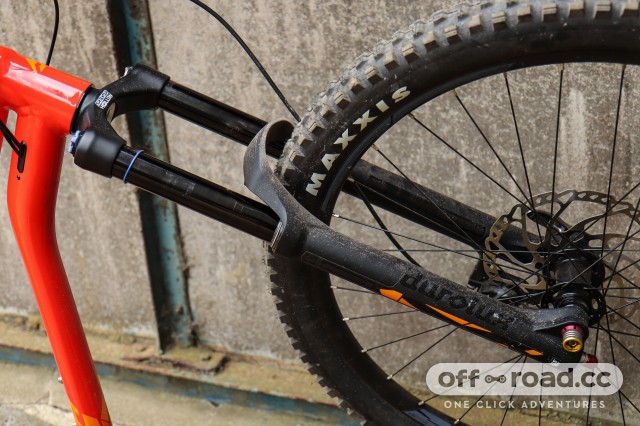 The Suntour Durolux RC DS fork isn’t one I’m familiar with, but after time getting it adjusted to my liking I was very impressed. It’s a very good fork at this price and it doesn’t hamstring the One-Sixty at all. You’ve got a usable range of rebound and compression damping, and the air spring volume can be easily adjusted. Remove the left side top cap and add or remove spacers from the top cap assembly to alter the volume. By default it comes with two spacers fitted, I actually removed one to suit my weight and riding style.

The suspension is smooth throughout the stroke with a light action and the damping is good, keeping the fork controlled during repeated hits, and ample progression to ensure it ramps up to handle bigger impacts and heavy landings well. 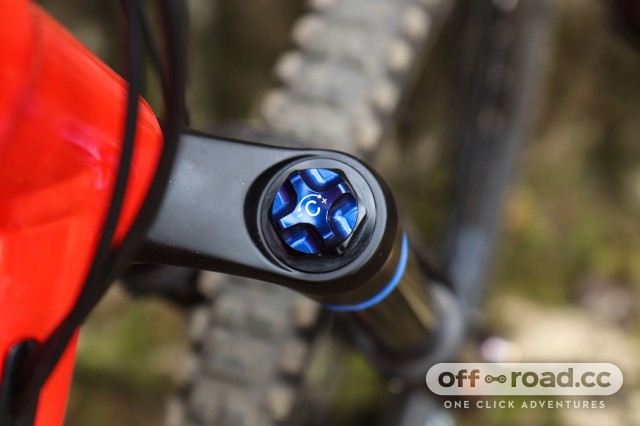 Chassis stiffness is impressive ensuring good precision when attacking the trail. The 15mm thru-axle is a bit fiddly to use the first time compared to a Fox or RockShox but once you’ve got your head around the system it becomes intuitive enough. 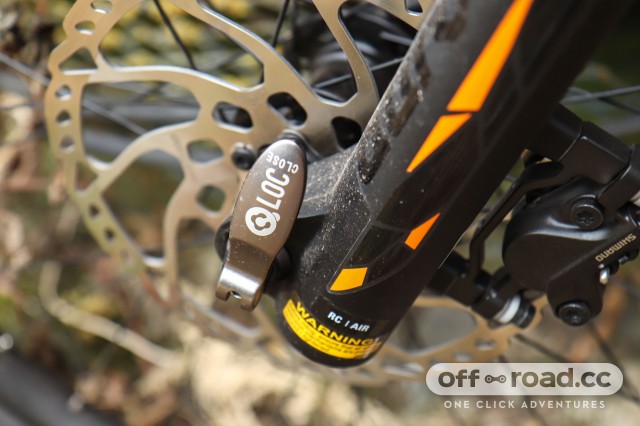 I won’t go out on a limb and say how it compares to a Fox 36 or RockShox Lyrik without some proper side-by-side comparison but I’d say it offers much of the performance at a much lower price. You’re certainly not being shortchanged. It is a fair chunk heavier though compared to its main rivals.

I’m going to go out on a limb and say the One-Sixty is a really smart looking bike. Swoopy down tube, decent paint job and understated decals, it all works well. 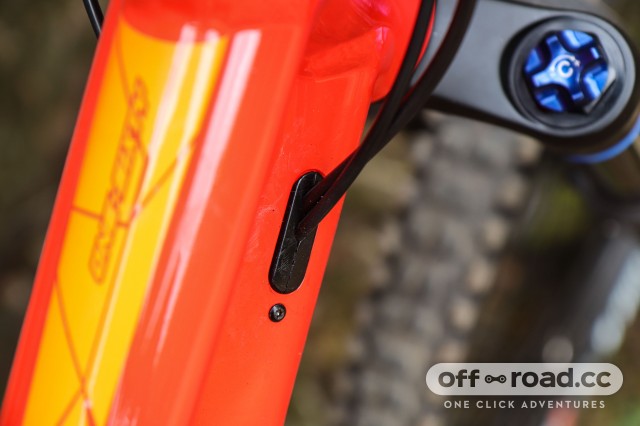 The curved top tube provides generous standover height, there’s full “Smart Entry” internal cable routing, a tapered head tube and an external threaded bottom bracket. The rear axle is Boost 12x148mm as is rapidly becoming standard on mountain bikes. The positioning of the shock allows space for a water bottle - I can confirm a 500ml bottle fits in a standard bottle cage. It’s snug but it works. 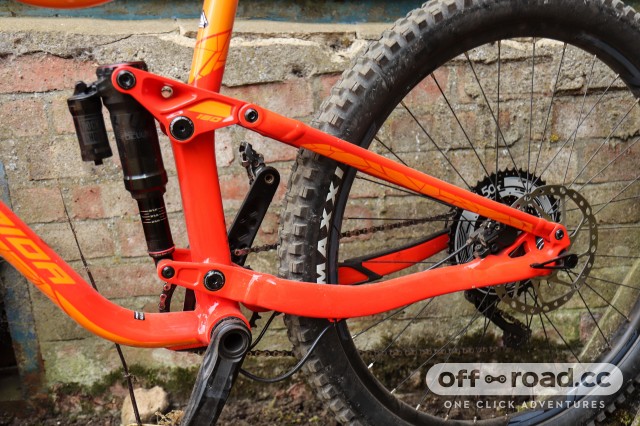 Merida calls the suspension design a Float Link. It's essentially a linkage driven single pivot with the shock floating between the rocker linkage and the swingarm, with a trunnion mounted metric sized shock. Merida says this design makes it easier to tun the leverage ratio and also saves weight in the frame as there are no shock mounts on the top or down tube. 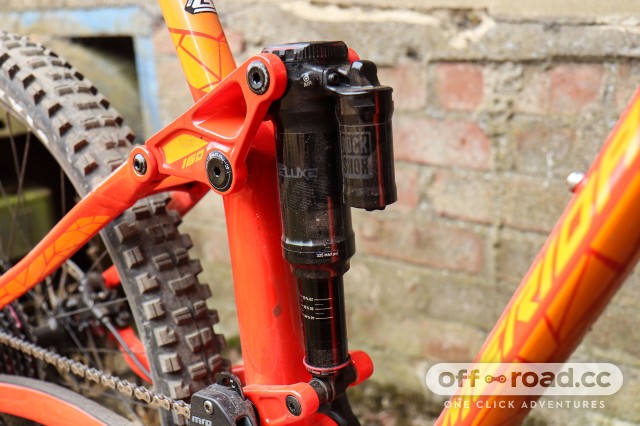 Suspension duties are taken care off by a RockShox Deluxe rear shock delivering 160mm rear wheel travel and a Suntour Durolux RC DS 170mm fork. Getting the suspension set up correctly is a relatively easy task. The rear shock has sag indicators so that’s a doddle, but I had to root around on the internet for suggested fork pressures as a starting point.

The Maxxis tyres are mounted to 29mm internal width aluminium tubeless-ready rim laced to a Shimano Deore rear hubs and plain front hub with double butted spokes. They’ve been reliable throughout the testing but would potentially be prime for a weight saving upgrade if future funds allowed it. 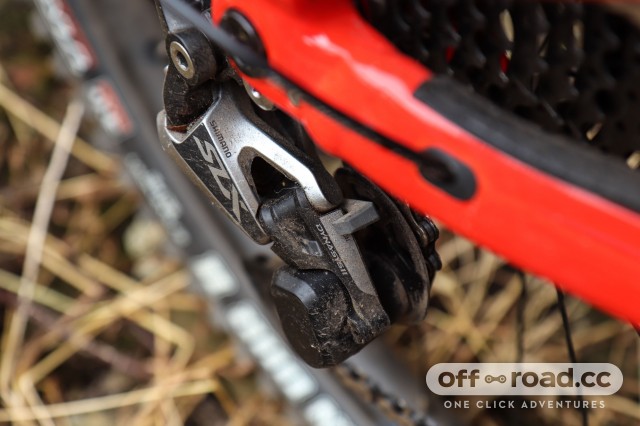 No front mech here as the One-Sixty, like many modern mountain bikes, has been designed entirely around a 1x groupset. Merida has combined a Sunrace 11-50t cassette with a RaceFace Aeffect 32t chainset and a Shimano SLX Shadow mech and shifter which provided ample range for my local trails, I was able to get up the steepest climbs with ease and never run out of gears on faster and longer descents. An MRP TR upper chainguard provides extra chain retention for rowdy riding peace of mind. 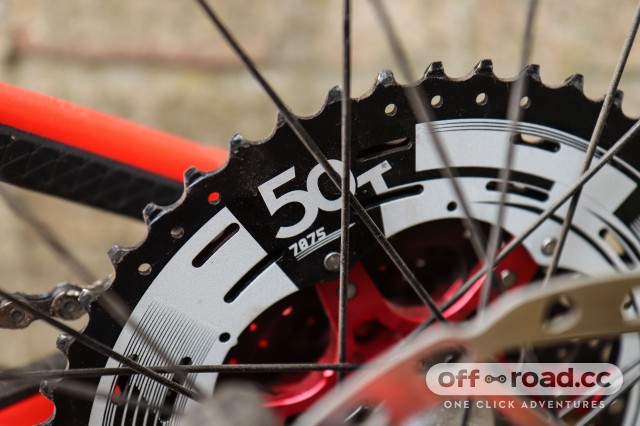 Brakes are Shimano M500 levers and calipers with 200/180mmm front/rear rotors. While they don’t have the bling of more expensive brakes even these cheaper Shimano brakes provided solid performance with plenty of control and no hint of fade on longer descents. Lever reach can be adjusted but you need to get a multitool out to do it. 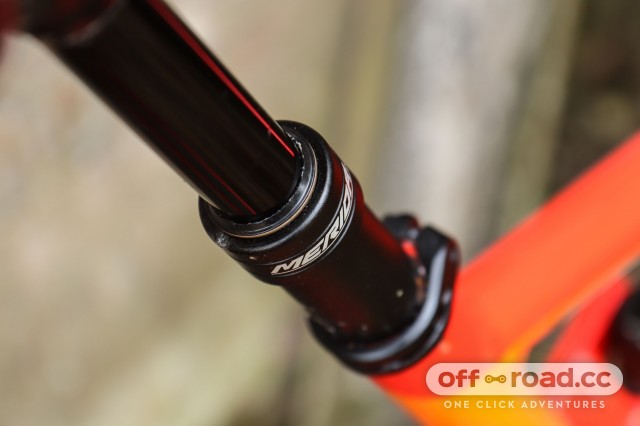 One component I would be keen to change if I was buying this bike is the handlebar. At 760mm wide the Merida Expert TR double-butted aluminium bar is a shade too narrow in my opinion, but the 35mm stem is on point for this sort of bike. Merida specs its own Expert Dropper post which worked flawlessly throughout the test, and the Merida Sport saddle is plenty comfortable enough, so I did eventually swap it for a Fabric Scoop.

It might not have the desirability or cool factor of many rivals in this category, but judged solely on its performance the One-Sixty 600 has a lot to offer. Add in the excellent value for money and easy availability in the UK, and you have a thoroughly appealing choice. Change the handlebar and you have a rip-roaring fun machine.

An enduro bike that won’t break the bank, the Merida One-Sixty is a properly capable mountain bike that’ll take on any trail that you want.

Rate the rear suspension for durability:

Rate the rear suspension for efficiency:

Rate the rear shock for value:

A lot of performance for not a lot of cash, the suspension and geometry come together really well in this value-focused enduro/trail bike
Bikes

It might not have the desirability or cool factor of many rivals in this category, but judged solely on its performance the One-Sixty 600 has a lot to offer. Add in the excellent value for money and easy availability in the UK, and you have a thoroughly appealing choice. Change the handlebar and you have a rip-roaring fun machine.