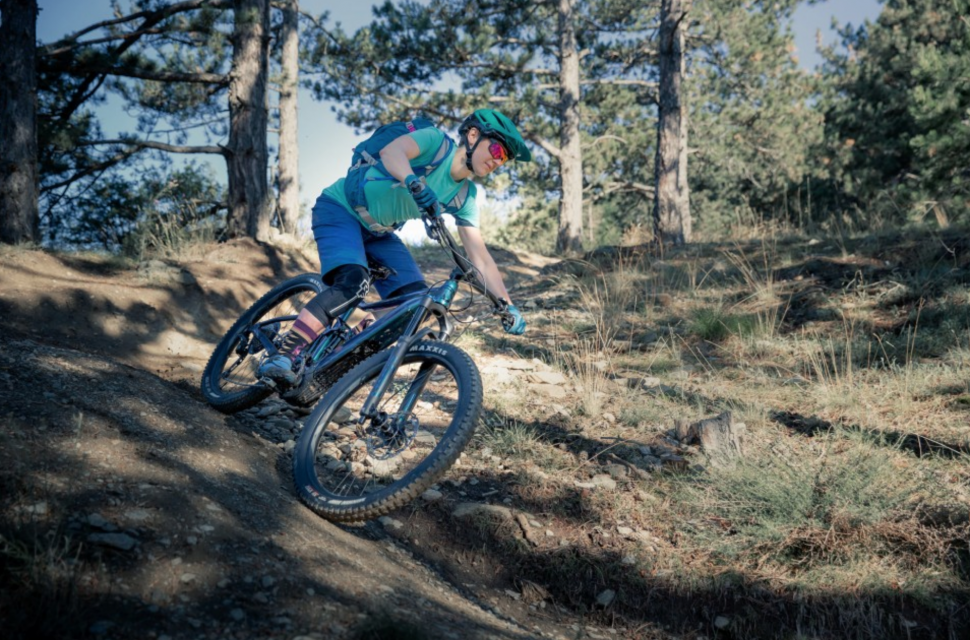 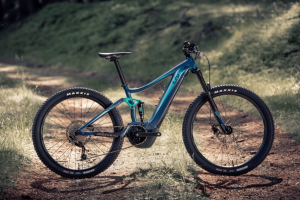 The Intrigue E+ is one of two new e-bikes from Liv Cycling, the brand dedicated to designing and making women’s bikes. Their first foray into full suspension e-bikes begins with this 140mm Intrigue E+ trail bike and also the 120mm trail touring bike, the Embolden E+. We flew out to the Venosta Valley in Italy to have a ride of both bikes over the weekend.

The Intrigue E+ is designed as trail bike for all types of terrain, it’s the most aggressive e-bike that Liv currently make and perhaps unsurprisingly is based on the non-power assisted Intrigue model, the brands 140mm trail bike. 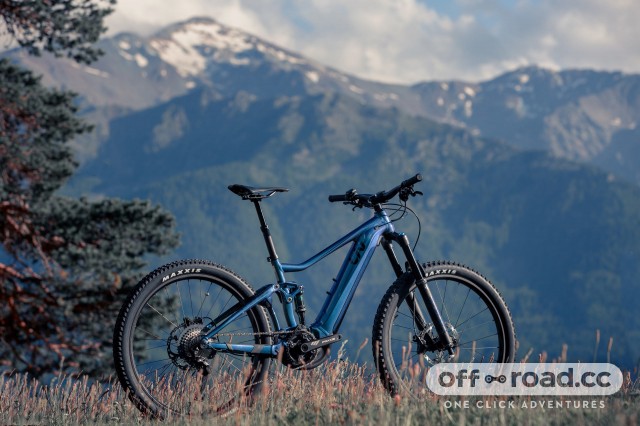 We tested was the Intrigue E+1 Pro, the top spec bike coming in at €4,399, there is also an Intrigue E+2 Pro which is slightly cheaper at €3,999 (UK pricing available in August). The bikes are powered by Yamaha SyncDrive Pro motor, with a fully integrated battery (500Wh capacity) and a handlebar-mounted RideControl ONE button system.  Giant is the only company that has the buying power with Yamaha that allows them to buy just the motors from Yamaha and spec the rest of the system themselves, hence the rebrand to Giant SyncDrive. 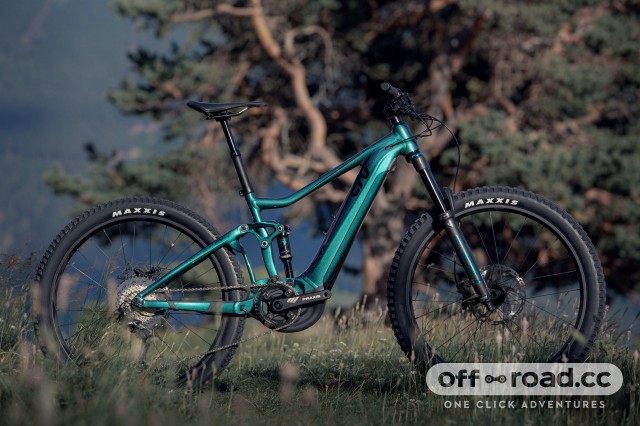 The SyncDrive Pro motor features five modes and offers 80Nm of torque and support up to 360% of the rider’s effort. The system uses the brand's own Pedal Plus technology, which is the use of four sensors (speed, torque and motor and pedal rotation) to measures pedal inputs from the rider and delivers the appropriate power assistance in return depending on the mode selected. It gives assistance in the ranges from 100% of your input in Eco up to 360% in Power mode. The motor also features a walk-assist mode and on this bike a more natural feeling, narrower Q factor (168mm) than the Sport motor used on the Embolden E+. The other difference between the Pro and the Sport motor is in the engagement of the motor with the Pro getting 24 ratchet system rather than just 16 in the Sport motor. 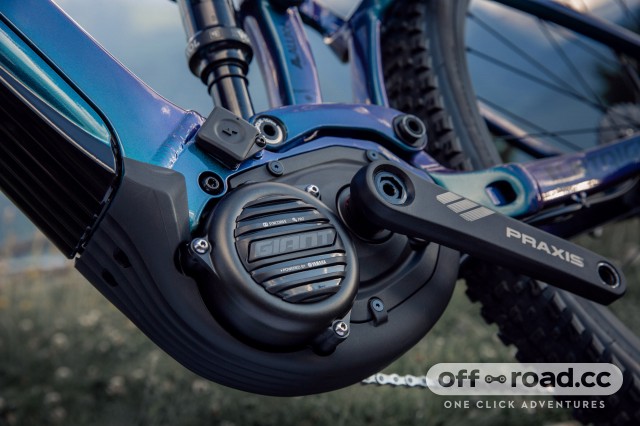 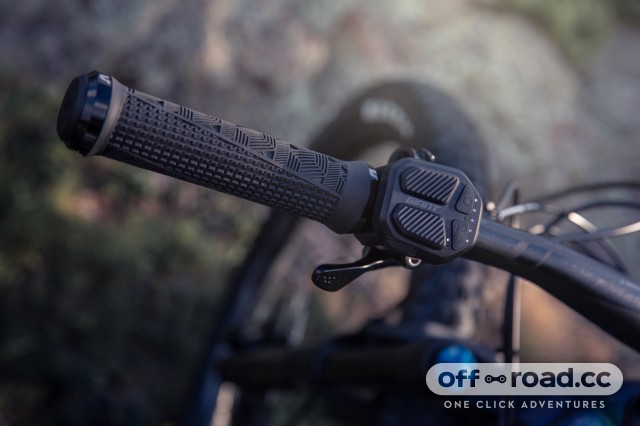 The battery is also a clever piece of kit, charging from nothing to full in 3 hours and 40 minutes with the help of the Smart Charger. Finally, with regards to the motor, there will also be an app available in September that will allow the rider to tune the motor to their preferences, record fitness and navigate too. 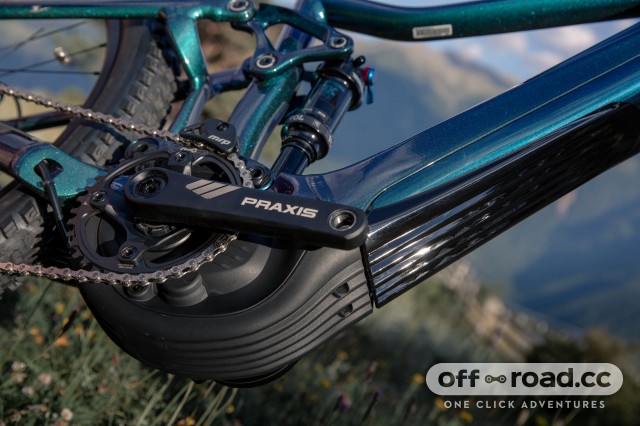 This alloy full suspension bike gets 140mm of Giant ‘Maestro’ floating pivot link suspension. This is paired with a 150mm fork, Fox 36 Rhythm e-bike fork on the more expensive bike I rode. The e-bike part in that title is critical here with the e-bike version of the fork getting the reinforced lowers, crown and stanchions from the 36’s and the internals from a 34 Rhythm fork. At the rear, the bike utilises a Fox Float DPS Performance EVOL shock for the 140mm of travel, with a Trunnion mount and a custom tune for lighter female riders. 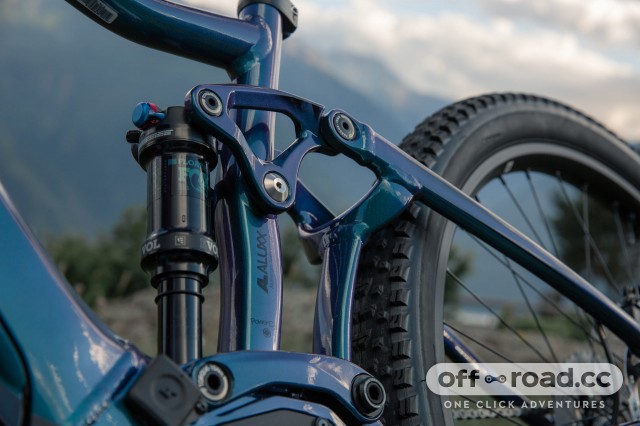 Specwise the bike uses Shimano XT 11 speed drivetrain with and 11-46t cassette and a Praxis 36t chainring up front. Brakes are also Shimano, these are the new and just released base model Deore BR-MT520 levers and 4 piston callipers with 203mm rotors front and rear. These worked well given the cheaper price tag, subject to some fade when they got properly hot, they are a good upgrade over two piston brakes. The rest of the gear is Giant own branded including bars, stem, seat post, grips, Liv saddle, 35mm internal width rims with Giant eTracker hub, the same kit at the Embolden E+. The Intrigue gets beefier tyres though in the form of  Maxxis DHF EXO 2.6” on the front and a Recon EXO 2.6” on the rear. As with other bikes in the range there are shorter stems and narrower bars provided for smaller bikes and there are 165mm cranks on the XS, with 170mm cranks on the Small, Medium and Large sizes. 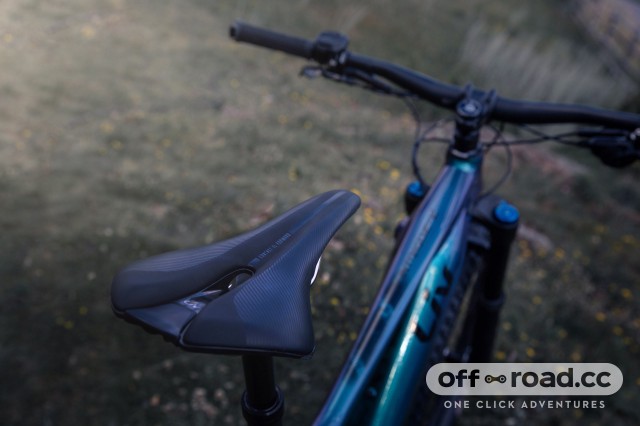 Liv have designed the geometry of the bike with women in mind, giving them the fit that they believe is best for the female shape using their 3F philosophy – fit, form and function. Liv say that women have shorter torso’s then the equivalent height man and the case of the Intrigue E+ this relates to a reach of 431mm, a seat tube length of 444mm and a wheelbase of 1201mm of my medium bike. Liv have positioned this bike as the most aggressive trail e-bike they produce at the moment and have given it a head angle of 66.5° and an effective seat tube angle of 74.5°. Quite conservative numbers, similar to the 140mm Giant Trace of which I suspect there is also an e-bike version on the horizon. It will be interesting to see the geometry differences there between the unisex company and the women’s one. 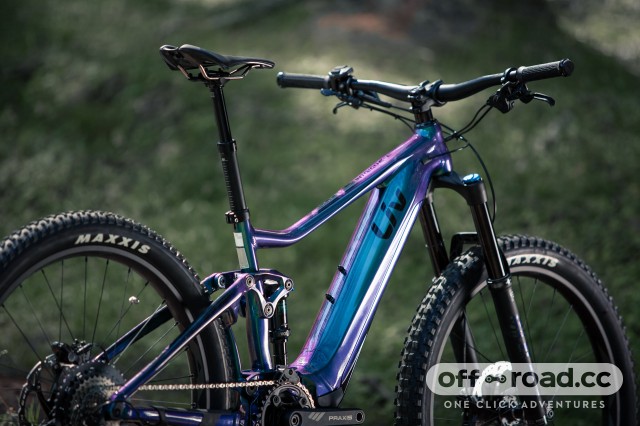 We took the Intrigue E+1 down some pretty serious terrain in the Venosta Valley, Italy, where it was a hoot to ride both up and down! The modes of the control system are easy to toggle between, making selection or alterations when climbing technical ascents easy and quick. The Intrigue E+1 relished a tough climb as long as you are in the right mode, I found that Active (250%) or Basic (175%) worked best depending on the severity of the climb.  As long as I kept my weight on the front, which even with the long chainstays was keen to lift at times, then you could scramble up anything. My climbing skills ran out long before the power had! I shoved my saddle forward in the rails to help me keep my weight on the front and even then had to sit right on the nose of it, this gave way to me thinking that a steeper effective seat angle would help here alongside a longer front centre to balance the bike. In terms of the e-bike part of te climbing test, I found the motor to engage quickly but required a half pedal stroke to ‘wind up’ to full power, not a problem but just something to get used to. The direct drive motor is also easy (albeit heavy) to pedal with the motor off, there is little lag, good to know if you get stuck with no battery or if you top out over the 25kmph. 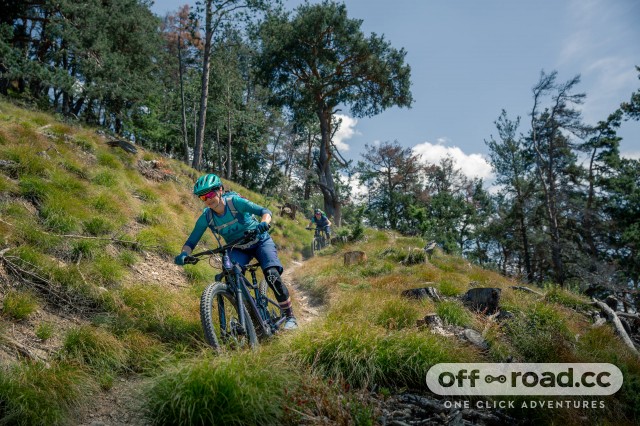 Descending on the Intrigue was fun and interesting, fun in part to the wide rims and tyres and the weight of the bike, which together produces a bike with so much traction and ability to plough over rough ground. The grip provided breeds confidence, willing you to ride the bike faster and faster. It was interesting in the fact that the relatively long wheelbase provided by the long chainstays didn’t provide the stable, confident feeling I was expecting, the feeling of the bike still overwhelmed by the short reach and steepish head angle and the use of that 60mm stem. The long chain stays do also something to curb the playful ability of the bike, but I was still able to move the bike around the trail and bunny hop obstacles where necessary. 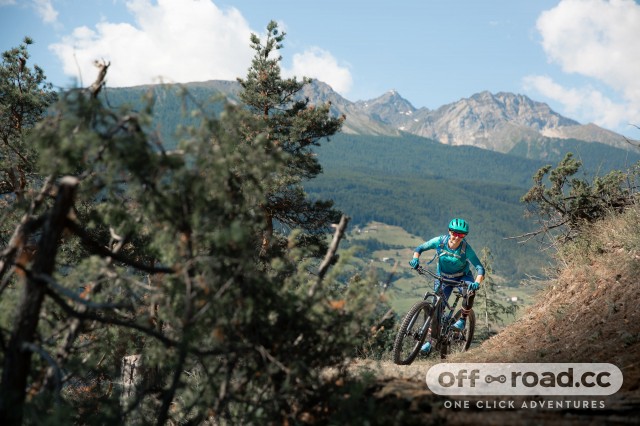 The fork and shock did a good job of softening the blow of bumps, large and small and at this price point are good options. On a similar priced women’s Canyon you get an optimised e-bike Fox 34 fork and on a Specialized Turbo Levo you get Rockshox Revelations RC’s. The Maestro link of the suspension is supple and provides the rider with support throughout the stroke although there was more than a hint of brake jack when trying to slow over chunky trail sections. Let the brakes off though and with the suspension is able to work again the bike is happy to hold a line on just about anything, all you need to do is sit central, dig your heels in and wait for the flat section to brake! 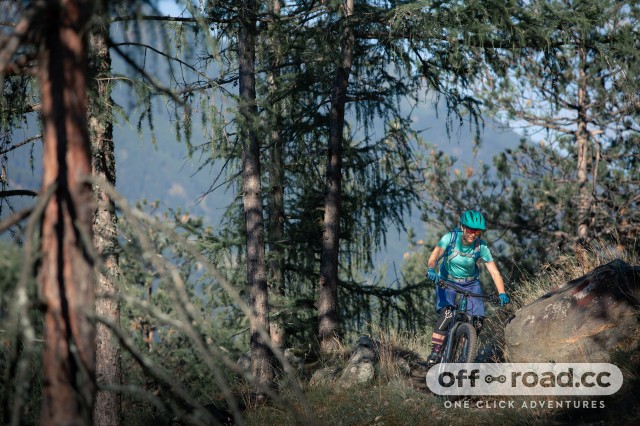 The linkage does cause a problem with the seat post insertion though, I'm 160cm tall and was only just about able to fit on the medium bike with a 100mm dropper post, due to lack of insertion room in the frame. A longer dropper would mean a longer seat post length with more left sticking out of the frame and would, therefore, leave me unable to sit on the saddle when the post was a full length. In a day and age where long droppers are commonplace on aggressive trail bikes, I think this is a major problem for Liv and something they assure me they are working on to get a resolution to. 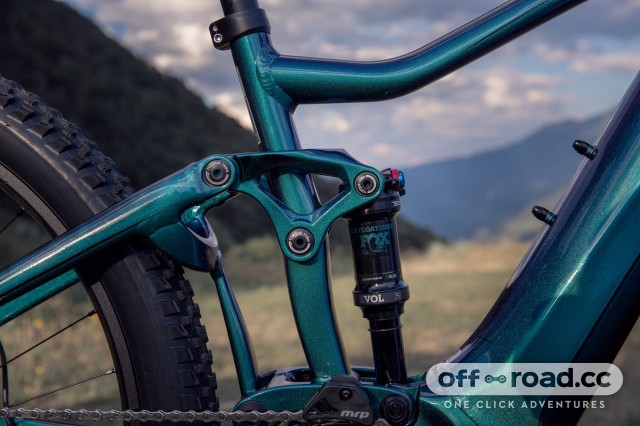 Whilst this isn’t the most progressive in terms of geometry it is ahead of the Giant curve, the other Maesto link 140mm e-bike (the Full E-Plus) from the brand is shorter and steeper so its great the see the women’s bike stepping away from this. It’s a great looking bike that will suit any rider looking for a trail bike with sorted kit for a foray into e-biking. Yes, the geometry could be more progressive but it’s on par with, if not ahead of, the rest of the market for a bike with this length of travel and whilst it’s not exactly to my tastes it does a great job of allowing the rider to have fun on the trails. There is also something to be said for shopping with a brand that has put all of its eggs in one basket, developing bikes just for women, it shows commitment and that can only be a good thing long term. With the right testing and feedback, I’m sure Liv will listen and be committed to making changes in the future so watch this space. Plus, look at that paint job, you’d be hard-pressed not to like it!

I’m looking forward to getting my hands on one of these for a longer term test where I can really get to grips with the motor, battery power and the geometry on my regular trails!