Skip to main content
Log In Register
NS RAG+ 2 2020 review £1,399.00
A fun-riding bike that can handle rough downhills without being a complete pig elsewhere 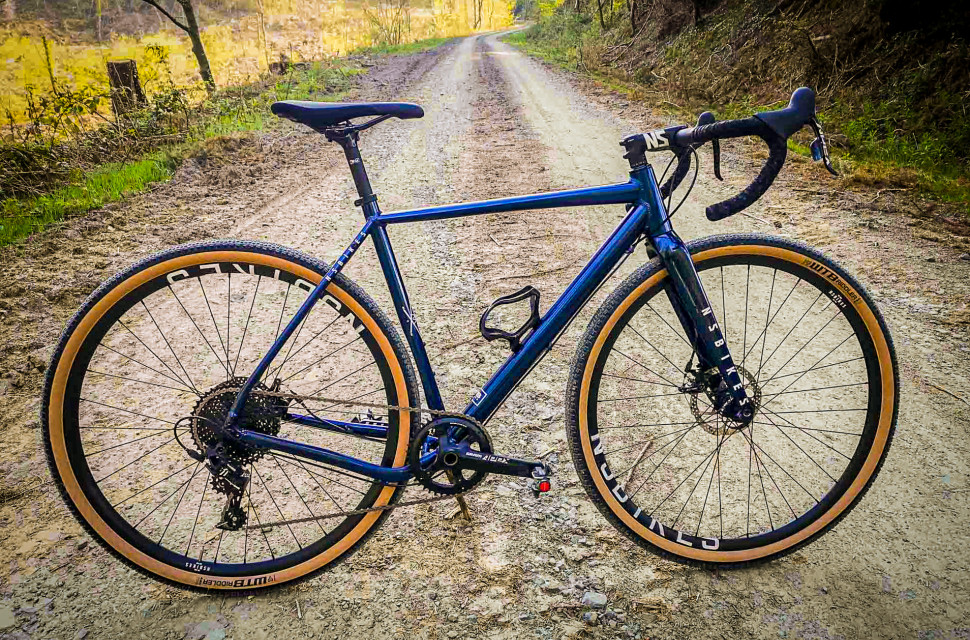 The 2020 NS Bikes RAG+ 2 lives up to its name well – it's good on both Road And Gravel, and it's a fun bike to rag down the descents. Even in its refreshed form it's no longer the radical option it was when it first appeared, and some spec choices are perhaps a little underwhelming, but big tyre clearance, a host of useful details and the tough build impress. 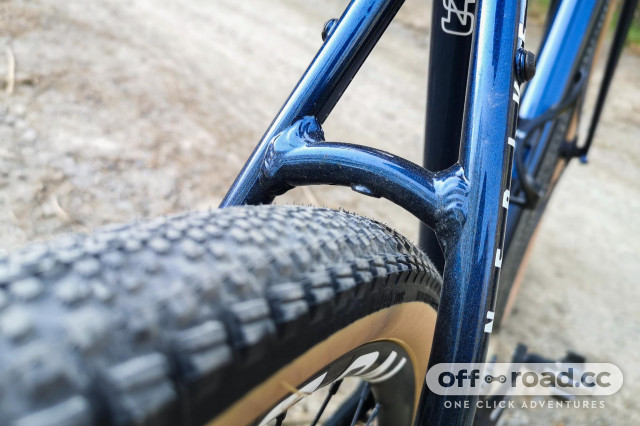 Tyre clearance is generous (especially within the forks) and one of the big selling points, with plenty of space for the 700x45c WTB Riddler tyres. The large volume really boosts comfort, too, although the basic non-tubeless casing does limit how low you can go on the pressures. Should you wish to fit 27.5/650b wheels, NS says there's room for tyres up to 2.2” – we tested even wider rubber without clearance issues. 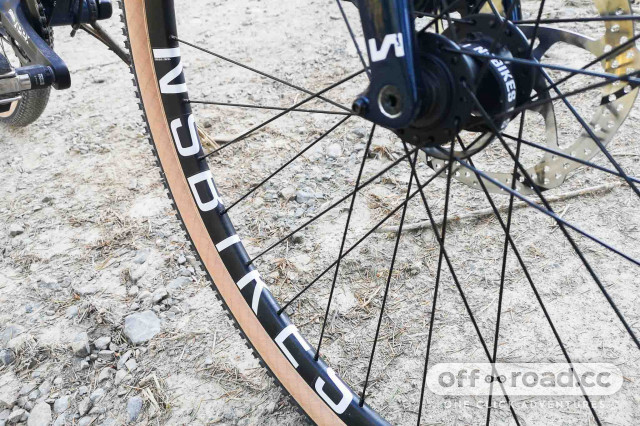 Unlike the tyres, the wheels are tubeless-ready, so upgrading at least doesn't involve a whole new wheelset. They are fairly heavy, but can take a beating – they're essentially mountain bike wheels. With 32 spokes and a  21mm (internal) rim, it gives a 45c tyre a broad stance and good shape.

On dry tracks and trails the tight spacing and low tyre height make it surefooted and fun to  descend on, even though the geometry is conservative compared to today's radical gravel bikes. In wet and muddy conditions it's a little sketchier, although given a very dry test period it wasn't something we could seriously experience – which we won't complain about! 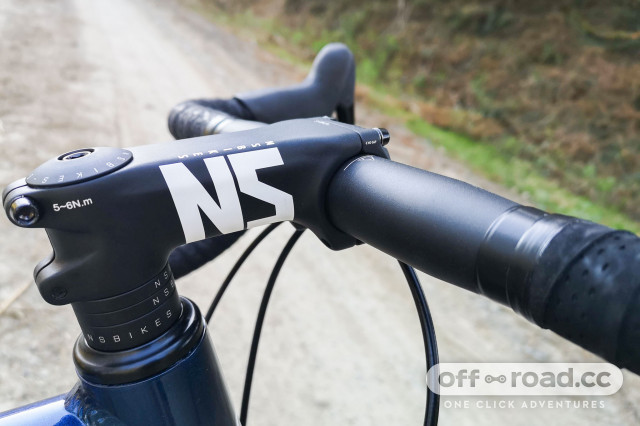 We think the cockpit looks great, with the flat top stem and NS bar logo that's neatly framed in the stem's faceplate to highlight it further. At 42cm on our medium frame, the bars are relatively narrow for a gravel bike, however. Combine that with only a slight flare and a 100mm stem and the cockpit is more towards the road end of the spectrum.

The stock seatpost is fixed, but anyone looking to fit a dropper post may struggle – there's no internal routing, and with cables already running on the downtube, external routing could be tricky.

The paint finish is beautiful, with a metallic fleck that really shines in the sun. On a more utilitarian note, the frame also offers rear racks mount and mudguard mounts, while the fork also has mudguard mounts... but no rack mounts. It lacks a third bottle cage mount under the downtube too. 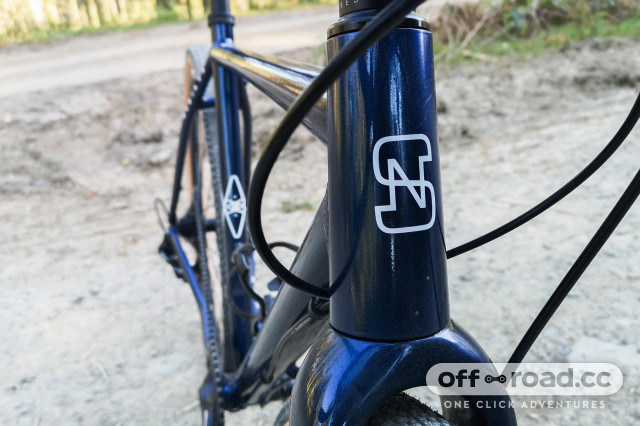 Our medium has fairly typical geometry with nothing too dramatic going on, although standover is on the high side, which has pluses and negatives. It means more space inside the frame for bags, but less room when actually straddling it. 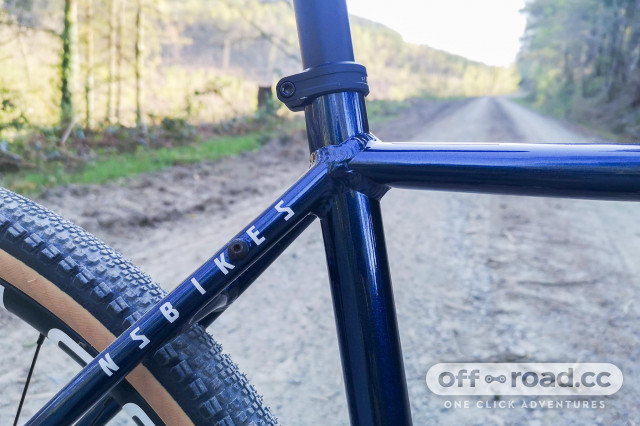 The short head tube means even riders who prefer a head-down position should be happy and. As someone used to slamming the stem on all test bikes, it was something of a change for me to keep 20mm of spacers beneath it... 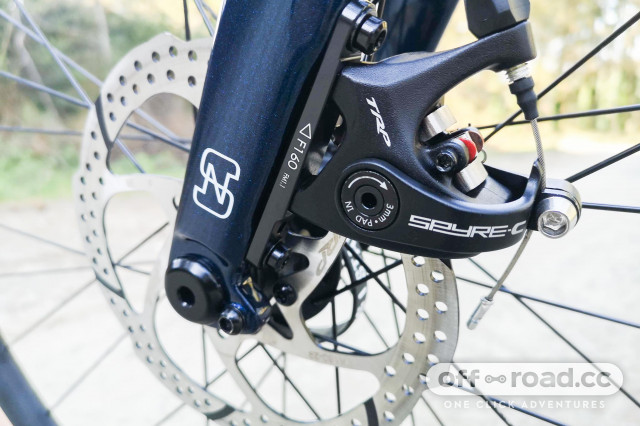 The SRAM Apex drivetrain is a popular choice on bikes in this bracket, even with the advent of Shimano GRX, and it's popular because it works reliably. The choice of 42t chainset and 11-42t cassette should give enough range for most riders and situations, with a 1:1 smallest gear.

The dramatically asymmetric chainstay design – which allows such big tyre clearance – does have one slight potential problem, however, which is that the chain clearance on the smallest cog is small. Gearing lower than the 42t fitted could see clashes. While it won't be an issue for the vast majority, it's worth noting the frame is 1x specific. 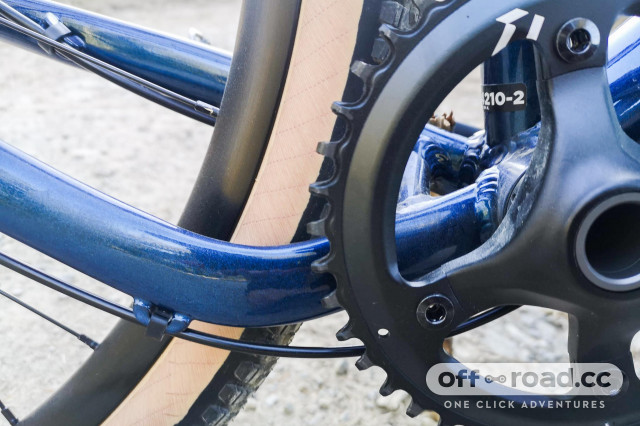 One spec surprise is the cable-operated TRP Spyre disc brakes fitted. While they function well for a cable disc, against most hydraulic options they lack feel and modulation, meaning they're easier to lock up when descending. Power is sufficient for most situations, although it takes more force than with something like, say, SRAM's Apex hydraulic brakes. 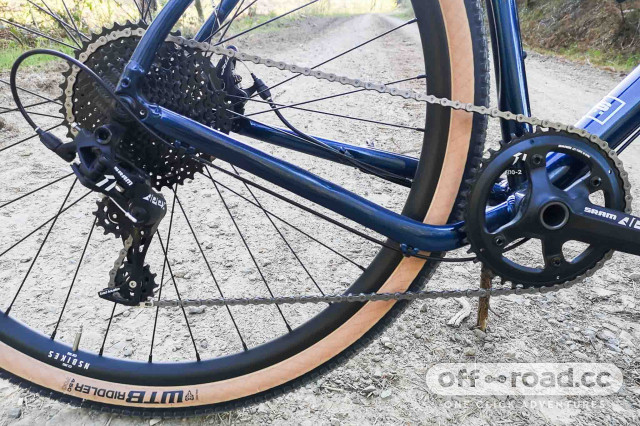 Full external cable-outer routing (with the sole exception of the brake cable through the fork) is a plus for home mechanics as it means simpler and quicker cable changes.

Who is it suited to?

It might not be quite as radical as when it was first released – or as the Evil Chamois Hagar or Nukeproof Digger are now – but the design and in particular tyre clearance and size options still stand out. The RAG+ remains a bike that will appeal more to those who relish the downhills, but even so, it rolls well on roads and doesn't feel like a chore when linking up dirt sections, or if using the RAG+ as a N-1 option.

The heavier wheels hamper performance on steep climbs and accelerations, as does the overall weight of 12.4kg without pedals and accessories. Don't let the numbers put you off, however, as climbing in general – especially on long gradual climbs – is surprisingly good, helped no doubt by the fast-rolling WTB Riddler tyres.

The RAG+ might not be quite the same stand-out design it was when first released, as its rivals have since caught up. But it's still a fun bike to ride, and one that can handle some rough riding. It lacks a few key features against some other bikes, and the heavy wheels and cable discs won't suit everyone, but for a bike to take on all terrain and never be too cumbersome on the boring bits, the NS Bikes RAG+ 2 works really well.

weight seems wildly off from all of the quoted figures which are nearer 10kg, any clarification?

I have WTB Riddlers on my bike, same size. They claim to be tubeless ready, and they are certainly not wired beads.

Also, do you have a pic with the chain included to illustrate the tight chain clearance to the dropped chainstay?