Skip to main content
Log In Register
Merida eOne-Forty 8000 2020 review £5,850.00
A well specced and solid e-MTB, but most riders will be better off with the longer travel eOne-Sixty 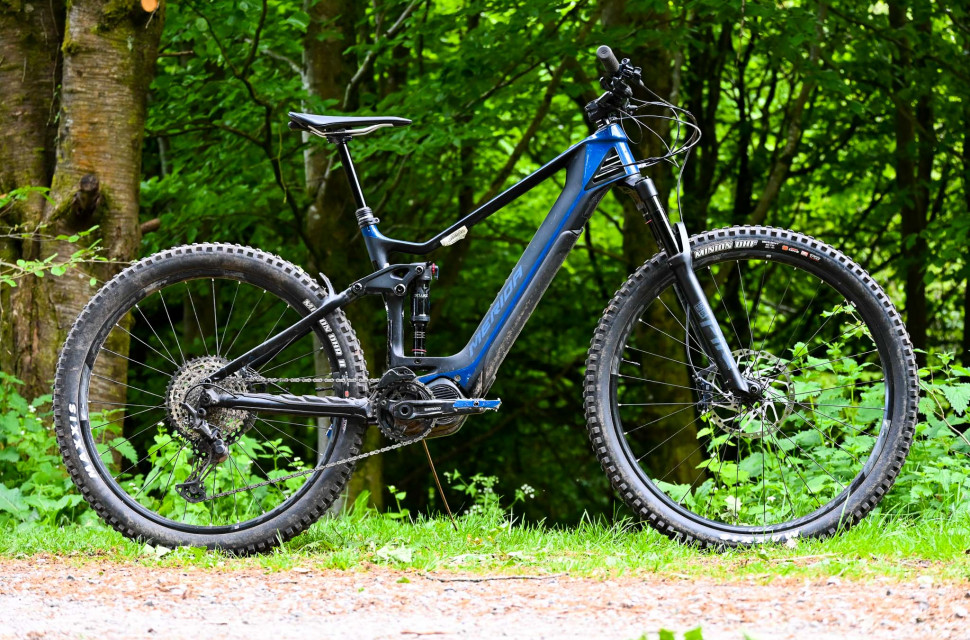 Jon Woodhouse
|
May 12 2020
|
Overall
Quality
Performance
Value
What's good?
What's not?
Buy if...
You're after a quality e-MTB and intend to stick to flatter, more chilled trails

Merida's eOne-Forty 8000 is a well-made and decently priced e-MTB that offers a sorted Shimano drive system nestled sleekly in a carbon chassis. It rides and handles well, but most riders would probably be just as well off with it's bigger brother in the form of the eOne-Sixty, which is much more capable, scarcely heavier and just as good value.

As the name suggests, the eOne-Forty delivers up 140mm of travel at either end, with a carbon fibre front triangle that houses an integrated 500Wh battery and Shimano STEPS E800 drive unit. Much like the eOne-Sixty, it uses a 29" front wheel and a 650b in the aluminium rear end.

While there's lots of chat about the handling benefits of so-called 'mullet' mixed wheel setups, in this bike it's here because it allows Merida to use the same linkage driven single pivot rear triangle and fixtures as the longer travel bike, which is also shared with the previous generation of Merida's trail bikes. Sticking with a smaller rear wheel also means it's easier to get a chainstay length that isn't huge, which pays dividends for handling. 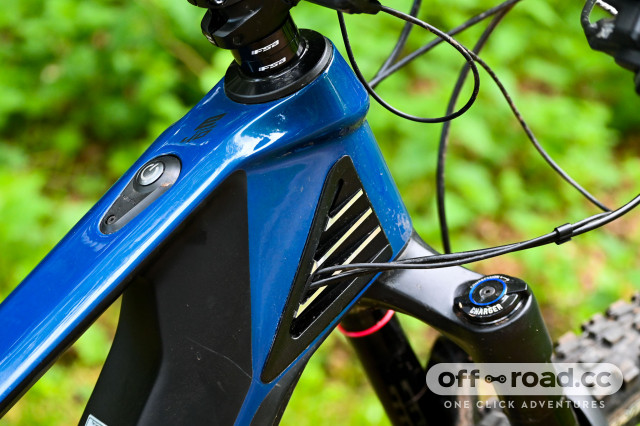 Much like it's bigger brother, there are some rather neat touches on the frame. The battery is easily removable, with a lightweight cover that gets a simple but effective rubber fastener and there are large vents near the headtube that, contrary to appearances, are to let hot air escape from the battery compartment on hot days rather than letting cool air in. You can also get a full-size water bottle in the frame and there's a special headset block that prevents the fork crown from spinning and smashing into your downtube should you crash. 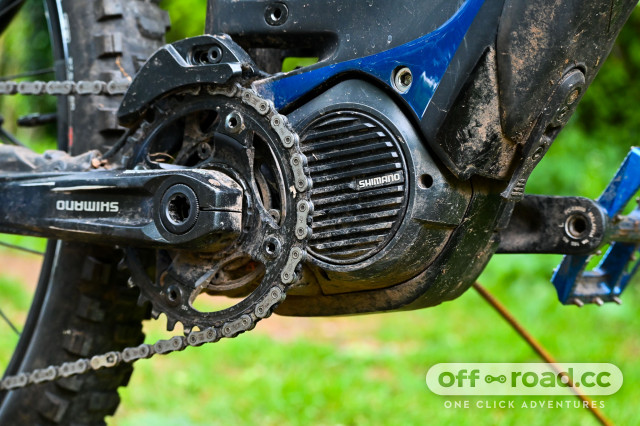 As ever, Shimano's STEPS drive unit is smooth and refined, with one of the most natural feeling assistance of any of the full-size e-MTB drive units. The colour display unit doesn't overburden you with information, but it's small and out of the way of danger. The same goes for the assistance switch, which looks a bit cheap and nasty but works well, especially if you're running an underbar remote for your dropper post. 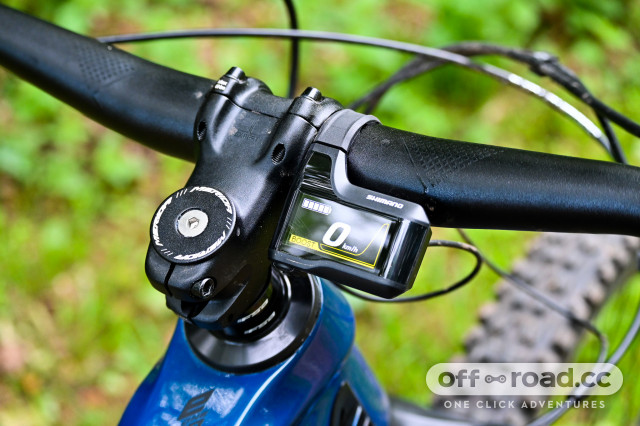 The internally mounted battery has a 500Wh capacity, which looks a bit weedy and light on range in comparison with the latest large capacity units from Bosch or Specialized. In reality, unless you're a bigger and heavier rider, that's still plenty for a very big day out and loads of climbing, regardless of whether you eke out life in Eco or go banzai in Boost. The big benefit from the smaller battery is lack of weight, which makes the bike easier to move about on the trail and much, much easier to lift, should you need to. 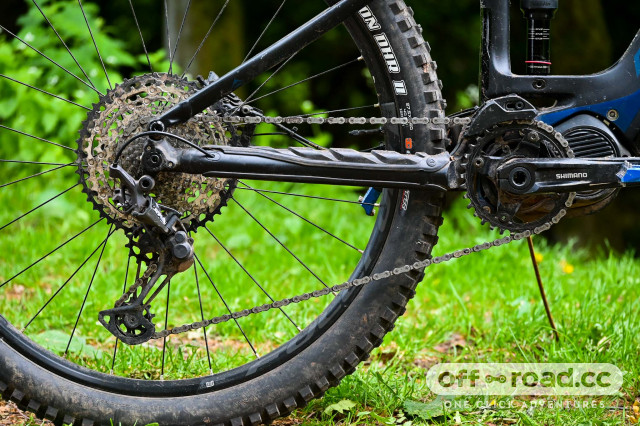 The Shimano drive unit is paired with a 12-speed Shimano XT drivetrain, which is pretty much flawless. There's smooth, crisp shifting, loads of range from the 10-51T cassette and it seems to take the extra strain of the 250W motor in its stride. Shimano also provide the four-piston SLX brakes, which deliver plenty of power, but once again our test set suffered from an inconsistent bite point, which undermined confidence. 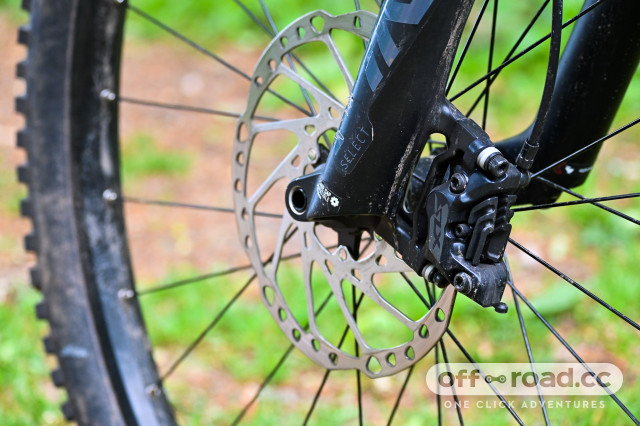 Talking of confidence, Merida has taken the slightly odd step of making the geometry on the eOne-Forty quite a bit shorter and steeper than its bigger brother. Given the eOne-Sixty (which we reviewed previously) wasn't a bike with a huge reach figure or mega slack head angle to begin with, that does undermine handling confidence once things get steep and rough. 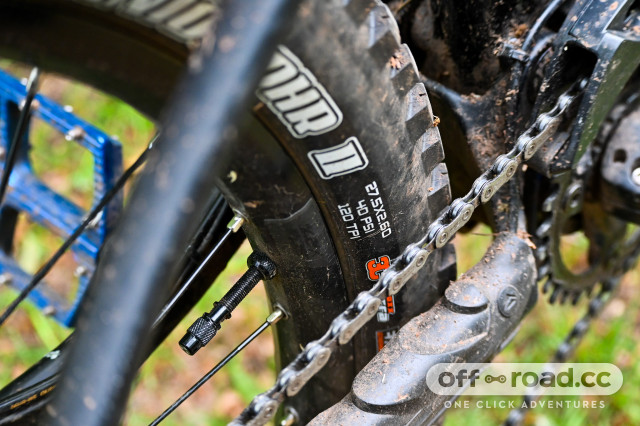 The large bike I tested - and at 172cm, Merida's sizing guide puts me on a medium - felt pretty cramped with a reach of 450mm, while the 66.5° head angle felt markedly more prone to trying to tuck the front wheel underneath me on the same trails that the eOne-Sixty had dispatched with aplomb. The 76.5° seat angle isn't bad though, so assuming you can keep the front end pointed where you want and on the ground - which can get quite busy - it's a good seated climber. 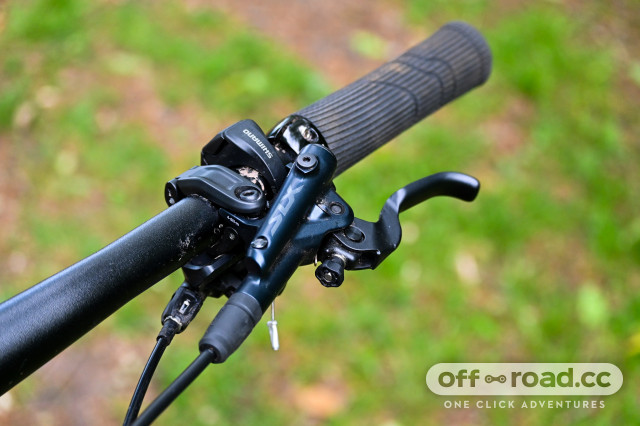 Given that the longer travel bike is barely any heavier - 22.3kg for the (admittedly higher specced) eOne-Sixty 10K versus 22kg for this bike - it does start to pose the question why you'd want the shorter travel bike in first place, seeing as the motor generally takes care of the (minimal) extra bulk around in the first place. 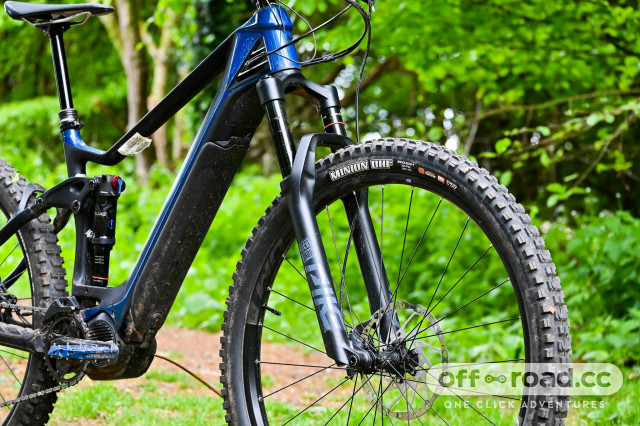 This issue is compounded by the fact that the more trail-riding focused kit fitted to the eOne-Forty is put under quite a bit of stress, with the RockShox Pike Select+ fork and Deluxe Select+ shock starting to feel out of their depth. The Pike has well-controlled damping, but the chassis stands to feel a little stressed and flexy under heavy use, as the legs start to bend and then bind. 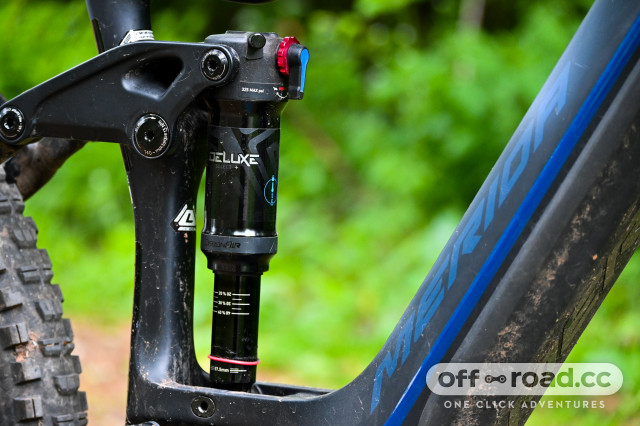 The rear shock has a similarly tough time as it's not got an external piggyback to boost damping oil volume, so when it's being stressed by 20kg of bike plus rider, the damping oil gets very hot and the damping starts to fade. It's not helped by the fact the rear suspension is pretty linear. When set at the correct sag for good initial traction it still was a bit too easy to bottom the bike out, often pretty hard. Cranking up shock pressure to stop that then means you lose rear-end traction and things start feeling sketchy. 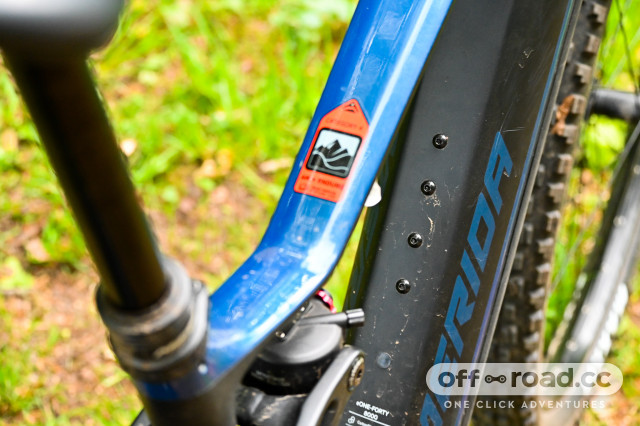 Compare this to the eOne-Sixty 8000, which costs exactly the same amount of money but gets more sorted geometry, a piggyback shock and stiffer fork, the same drive unit and carbon frame construction and identical drivetrain and brake setup and if it was me buying, I'd have to live somewhere very flat indeed before I chose this bike over that one. 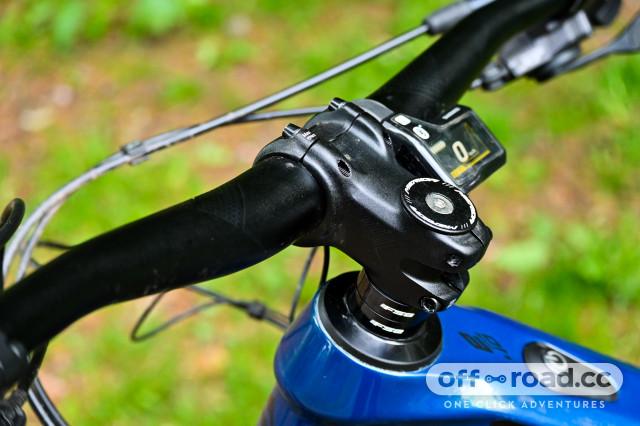 However, the rest of the kit was up to scratch. The 150mm travel Merida branded dropper was smooth and worked well through the test, though the Shimano-branded remote lever was a bit small and fiddly to reach. The rest of the own-brand Merida kit was good, with a 780mm wide bar paired to a 50mm stem, plus a saddle that was minimally padded but surprisingly comfortable. The  Fulcrum wheel and Maxxis DHF front and DHR II rear tyre package was a dependable, grippy and tough highlight too. 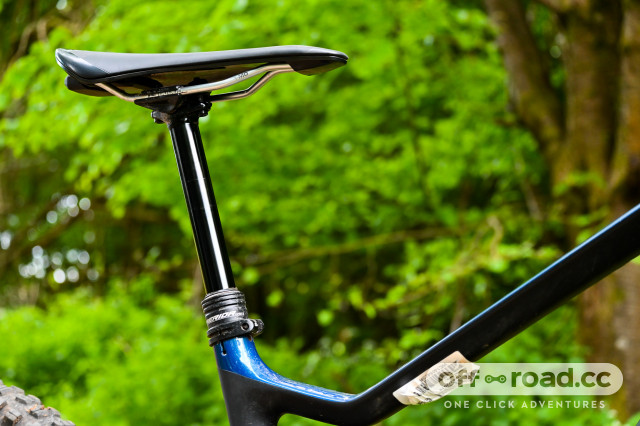 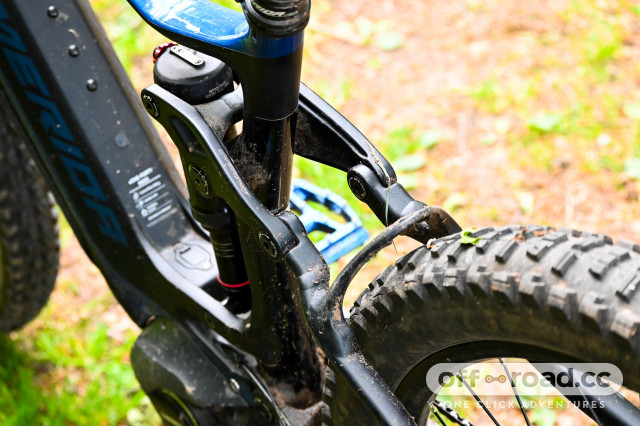 There are plenty of riders that might not ever have the intention of pushing their bike hard enough to get to the outer limits of what's capable on this bike and they'd likely be very happy with the eOne-Forty 8000. Even then, it's hard to overlook that the longer travel bike seems to have few drawbacks; after all, you can happily not use all that extra suspension travel or stress the suspension, but it still feels to me like an occasion when it's be better to have and not need rather than need and not have. 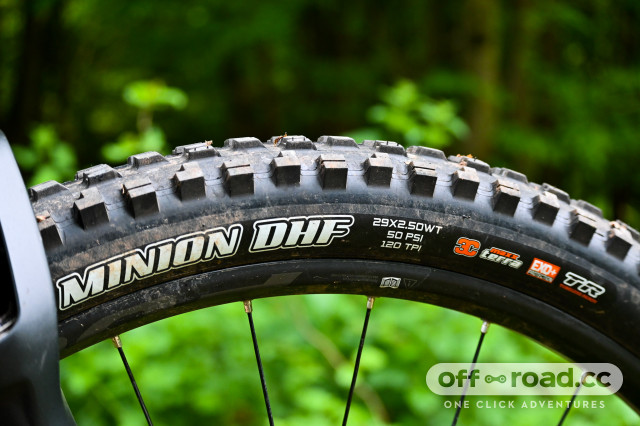 That's a shame because it's still a fun and pretty capable e-MTB in isolation. The drive unit is excellent, the frame well made and the kit is all very decent for the cash. It just suffers in comparison with the bigger travel bike, which offers all that and a fair bit more capability to boot. It's probably how the siblings of prodigies feel - yes, you might be an accomplished pianist now, but you weren't the one that wrote that symphony aged eight, are you?