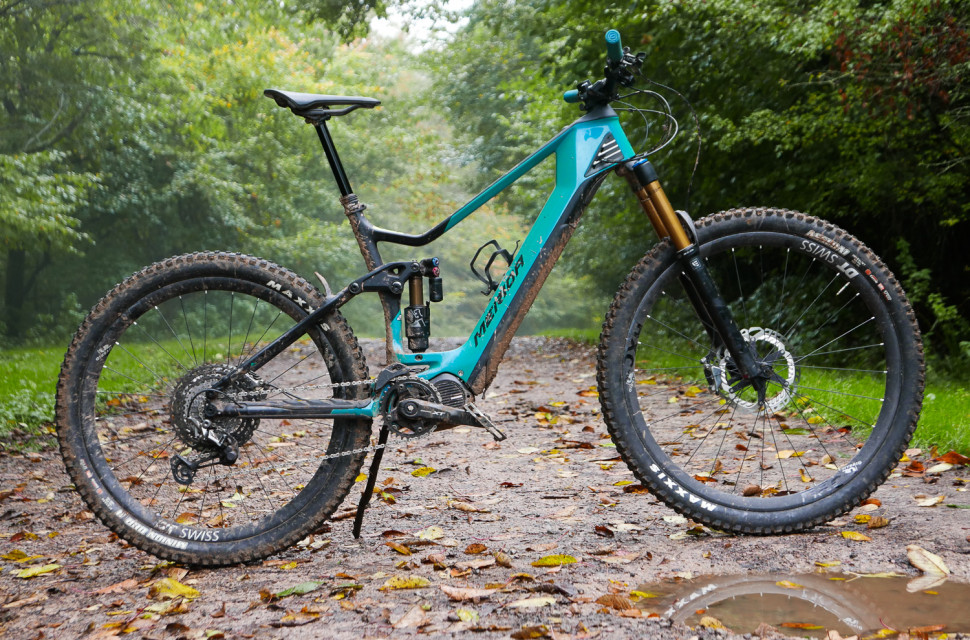 Merida's eOne-Sixty 10K sits at the very top of the brand's long-travel e-bike range, with a carbon fibre front end with integrated 500Wh battery driving a Shimano motor and mismatched size wheels. It's got handling that strikes the right balance between agility and outright stability, but harder or heavier riders might find the rear end too willing to give up the travel if they want to push their limits.

As the name suggests, the bike sports 160mm of travel from either end, with a full complement of Factory-level Fox shocks taking care of the bumps. Taking care of making you feel like a cycling god is Shimano's STEPS E8000 pedal-assist system, providing a robust 70Nm of torque in addition to what you bring to the party.

While the mullet wheel setup might be very on-trend at the moment, there's a more prosaic reason for it being used here, namely that this bike shares its aluminium back end with the previous generation bike that used 650b wheels all round. That's been done to reduce costs and expand spares availability - all bearings and bolts are the same, so they should be easier to find when they do need replacing. 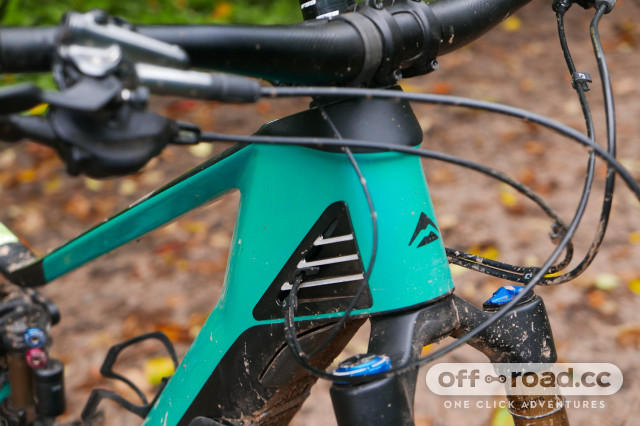 The carbon-fibre front triangle houses a 500Wh battery in the downtube; that's down on capacity compared to bikes using Bosch's latest 625Wh in-built offerings but Merida is kind enough to sweeten the deal by throwing in a second 500Wh battery and special EVOC backpack for you to carry it around in. That's a bit more faff than just having the extra capacity in-built already, but it does mean you have a separate spare plus a lighter bike the rest of the time. 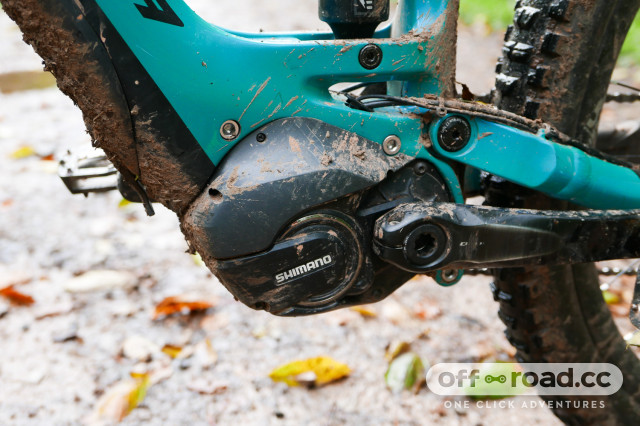 That said, at a not-inconsiderable £9,500, your wallet is likely to need a bit of sweetening, though the absolutely top-drawer build kit does go some way to justifying that price. The drivetrain is Shimano's finest, with the new 12-speed XTR groupset offering a 10-51T range and extremely smooth shifting, even under hard load. That's matched by the four-piston XTR stoppers on 200mm rotors giving plenty of power with loads of modulation to boot. 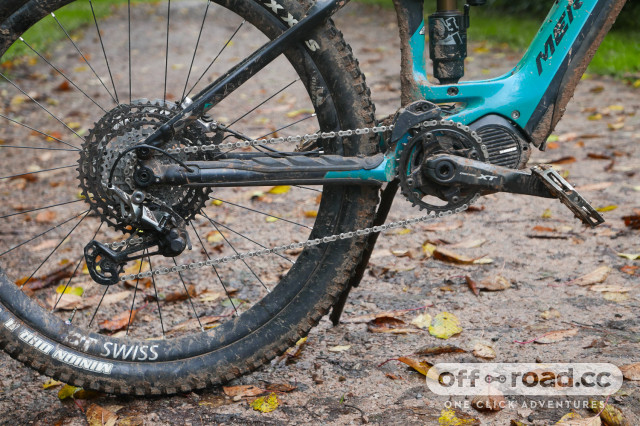 The carbon-rimmed DT Swiss Spline HXC wheels get a 29" front rim and a 650b rear.  They're excellent, tough and stiff but I think carbon is a bit of an odd choice for an e-bike rim - I'd rather see alloy rims to save a bit of cash from the list price and also cheaper to replace should you happen to damage one badly, which is a distinct possibility on a hefty e-bike. Still, the 30mm width offers good shape to the tyres and the freehub is nice and quick. 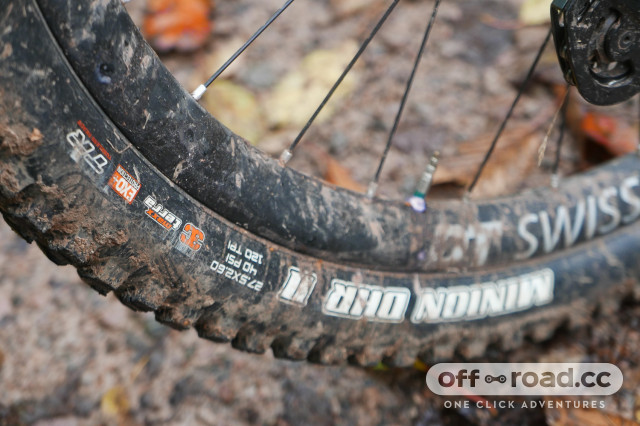 It's not all plain sailing elsewhere on the rolling stock. The bike really needs a tougher tyre than the EXO Plus casing Maxxis Minion DHR II it has on the rear - I managed to cut the bead so badly on the first outing that the tyre would no longer work tubelessly. It really needs a full-on downhill or Double Down casing as a minimum. The front Maxxis Assegai uses the same mid-weight casing but doesn't take quite as much of a beating, offering excellent grip and predictable breakaway. 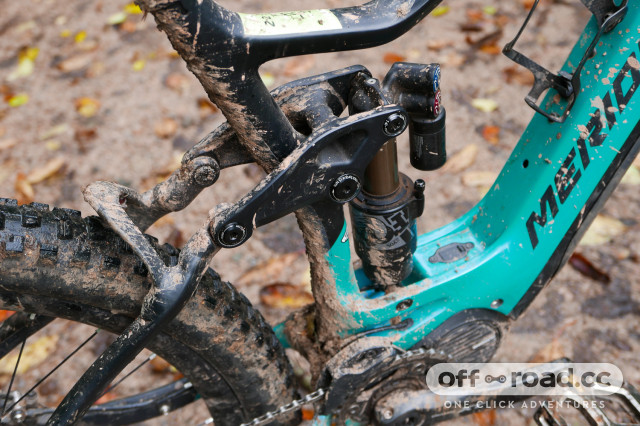 Finishing kit is most from Merida with their own 150mm dropper post - that works just fine - plus a dinky 40mm stem and 780mm alloy bar. The bike comes with a bottle cage plus some rather flimsy mudguards that didn't survive the first few rides. The rear axle has a removable 6mm Hex tool that clips in - I'd suggest you remove it before it removes itself on the trail somewhere. 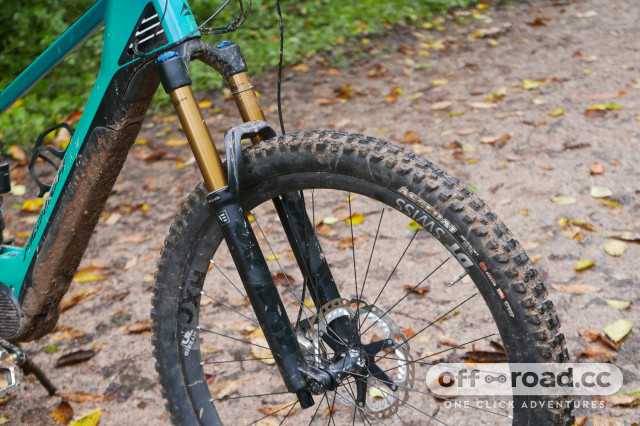 Fox provides the Factory-level, Kashima coated shock and fork, with the X2 rear shock paired to a 36 FIT GRIP2 fork with the stiffer e-bike chassis. The fork is very good, with superb control over the roughest of terrain and damping that's nigh on impossible to fluster, no matter what you chuck at it.

As with most four-way adjustable shocks, you need to spend dedicated time dialling that X2 rear shock in to get it feeling just so, though Fox's suggested settings are never far out. The X2's air spring is pretty linear as these things go and the rear end doesn't seem to have a huge amount of progression built into it either, so I found that it was often a bit too willing to give up all the travel - and I'm a relatively lightweight 65kg. 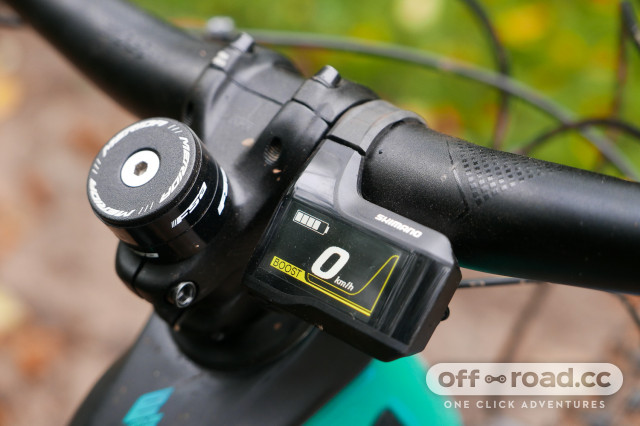 If you're a heavier and harder riding, you might have to add more air and run less sag than is ideal to get bottom-out support, even if you do put the maximum number of volume spacers into the shock can. Apart from that, it is a very supple and well-controlled suspension system, with good small bump traction and decent support for when you're charging hard. 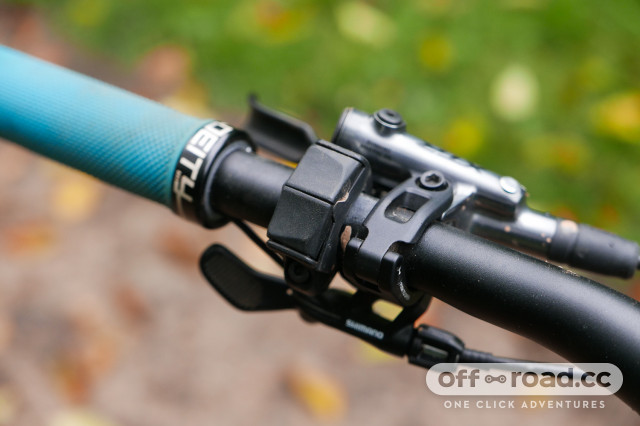 The geometry isn't hugely slack or long; this large bike has a reach of 460mm and head angle of 65.6° but it's easy enough to size up should you wish and you'll get full dropper post insertion depth regardless of frame size. While these figures are critical on a purely human-powered bike, the mass in the chassis really helps with stability so it's not a deal breaker by any means; if anything it keeps the bike nice and responsive to inputs when the trail gets tighter.

The relatively low 22.3kg weight helps here too; it's amongst the most fun and agile long-travel e-bike I've ridden but it still performs when things get more hectic, though you do need to remember to weight the rather tall front end to ensure you get maximum bite from the front tyre, though you can be safe in the knowledge the Fox fork will back you up if you do. 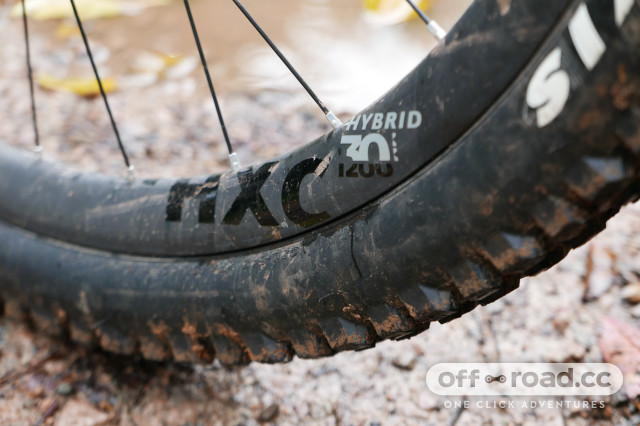 It is good to see a fairly steep 75.5° seat angle too. The sort of insanely steep climbs that are only possible with huge fitness and talent on a normal bike is bread and butter for an e-bike, so a good seated climbing position with weight well forwards is a must to maintain traction and prevent front wheel lift. I'd be happy for it to be steeper still, but it's well sorted as it stands.

As ever, the Shimano drive unit is refined, natural feeling and full of grunt. The little colour display is very minimalist but tells you what you really need to know but the mode selector switch does feel a little bit cheap compared to the old Di2-style controller - though using this does mean there's space for a proper underbar dropper post lever, which is much more useful to have near to hand, in my opinion.

I'm fairly torn about the benefits of the bigger capacity built-in batteries starting to become available as with Bosch's 625Wh and Specialized's 700Wh units; the bigger range is great but I think the extra weight with those is pretty noticeable, especially if you're of a lighter build. 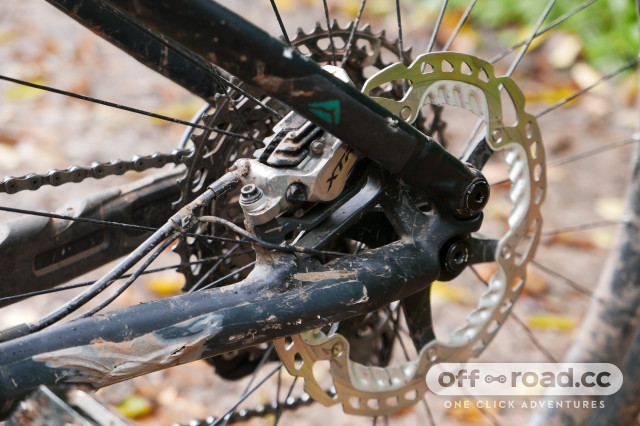 I found the Merida's 500Wh battery was enough for a pretty decent all-day stint if you keep to the lower power settings, though a rapid afternoon of ups'n'downs will see you running low if you stick it on the highest 'Boost' power setting. Still, that extra battery and backpack is there for you should you decide to go on a big loop and that's something I'd probably prefer over just have one single big battery.

All in all, the eOne Sixty 10K is a sizable investment but it does deliver a top-end kit and a ride that's plenty capable while still being fun and engaging. The Shimano drive unit is extremely good, being probably the most refined system I've tried, with excellent, natural feeling assistance and no quirks to mention.

So okay, the eOne-Sixty isn't perfect. Hard-charging riders will need a bit more support from the back end and a much tougher rear tyre, but if you're not giving it ten tenths all the time and everywhere you go then you'll probably be happy as it stands. That is just as well when it costs nigh on ten grand, but if you're in the market for a top-end machine, you could do an awful lot worse than this lightweight, refined and very much top-end machine.