Skip to main content
Log In Register
Lauf True Grit Race Edition review £4,714.00
If you're after a dedicated gravel racer, the True Grit has to be near the top of the list; capable, comfy and extremely rapid. 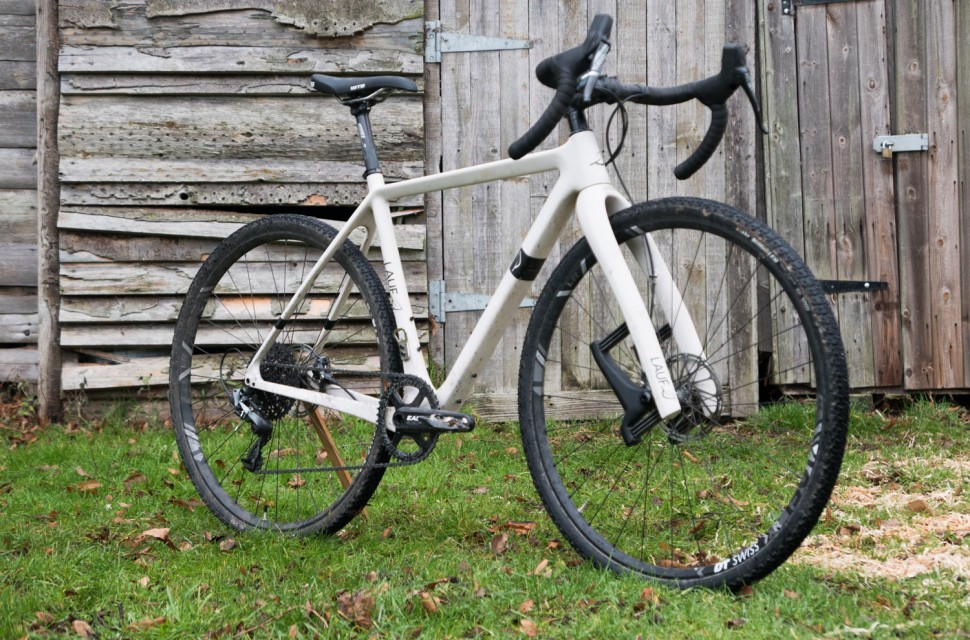 Lauf's True Grit shuns the usual versatility of most gravel bikes for a pin-sharp focus on racing, with their unique leaf-sprung fork taking centre stage on a bike that's quite unlike most others out there. As a complete package for going very quickly on dirt roads, it's hard to beat.

It would be remiss to start talking about the True Grit without mentioning the elephant in the room, namely, the unique leaf sprung fork. As standalone units, they've become hugely popular with gravel riders and cross-country mountain bikers after low weight without the full brutality of a rigid fork. 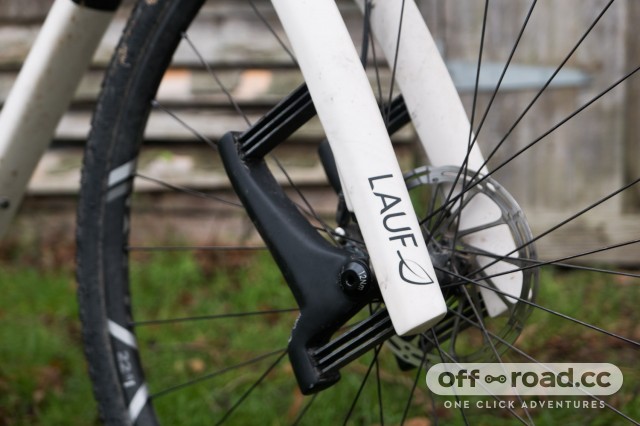 Delivering 30mm or so of undamped travel via fibreglass leaf springs embedded in two carbon substructures, the Grit SL is a sleeker and lighter version of the same well-proven Grit fork Lauf offers on the aftermarket, with lines and a colour scheme that makes it look somewhat less ungainly.

It's also extremely effective at doing what it's made for, namely taking the sting out of rough fireroad surfaces. While it can feel rather odd at slow speeds - especially trackstanding - once you're up to speed, the lack of friction from seals means that it's very sensitive and the lack of damping isn't an issue as the high-frequency bumps and short travel really don't need it.

It's absolutely night and day when compared to riding a rigid fork over the same rough surfaces, with the Lauf delivering much more grip and comfort, something that your wrists will be eternally grateful for on a long day of riding or racing. In fact, the most noticeable feature of the fork is the fact that you forget it's there most of the time - it's only if you move back to a rigid-equipped bike that you realise just how much work it was doing. 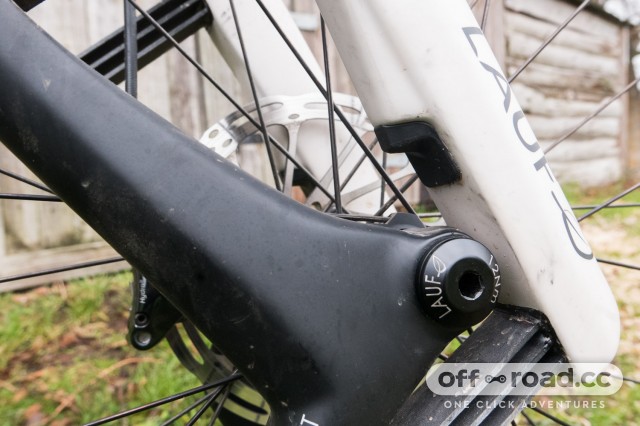 While there's no choice of different stiffness springs - or any way to change them - the fork seems to work well within the confines of the 110kg weight limit for the frame and fork, though I suspect if you're at the upper end of the scale you might run into the little rubber bottom out spacers a bit more often than most, though this isn't hugely noticeable when it happens.

While the True Grit's fork gives it a unique edge compared to most, that's not to say that the rest of the bike is an afterthought - far from it. The frame is full carbon fibre, with geometry that's dedicated to riding and racing gravel, rather than many that position themselves in the category to add excitement to a design that's probably going to see most use on the commute. That means it's pretty long and slack for a drop bar bike, with Lauf's Long 4 Speed geometry pairing a decent length top tube with a shorter than usual stem, from 70-100mm. 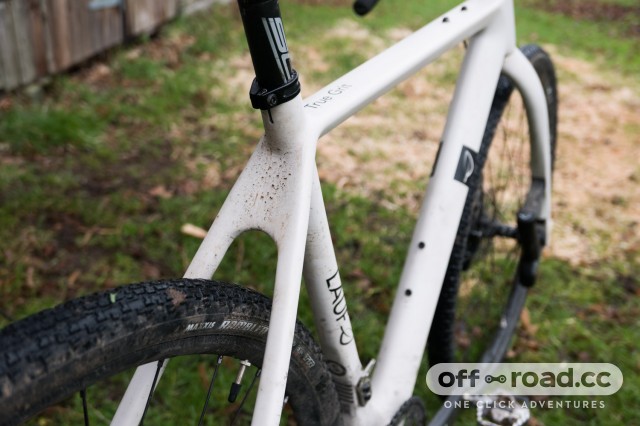 In fact, the sizing is quite clever, with the three main frame sizes being offered with a 'long' or 'short' option to further fine-tune the fit via the stem length. I'm 172cm tall and found the small/long to be a good fit, with a 551mm top tube and 80mm stem giving a good position on the bike. It's worth noting that contrary to most gravel bikes, the front end is pretty low - 105mm for the small, 133mm for medium and 164mm on a large - though there's plenty of steerer length to give you the option of racer slammed or a bit taller for more comfort. 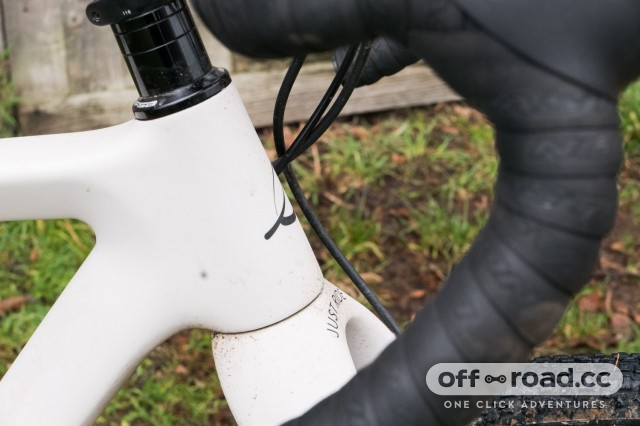 The reasonably-slack-for-a-gravel bike 70.5º head angle is paired with a 72.5º seat angle and a decently low 65mm bottom bracket drop across all sizes, giving confident handling at speed without making the bike feel sluggish to react. Thanks to the flattened seatstays, the rear is also pretty comfortable and there's very little twist or hesitation from the back when you stamp on the pedals to get things moving. 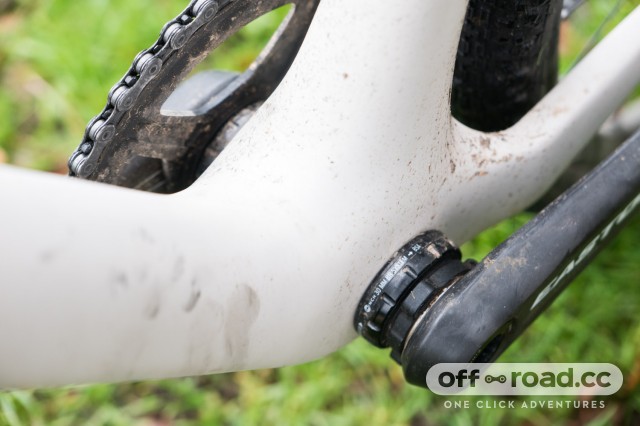 It's also good to see a threaded bottom bracket holding the cranks and the internal cable routing is fully sleeved to make replacing cables and hoses much less of a chore. The frame also gets a trio of bottle cage mounts plus a bento box mount up on the top tube. On the small sized bike, the downtube cage mount wasn't a huge amount of use for a bottle as anything put in there would touch the tyre when the fork compressed, but that's not an issue on the larger bikes. 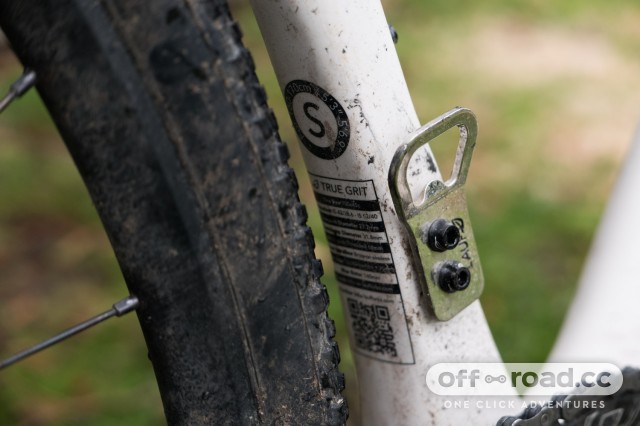 One thing that might be a deal breaker for many is the total lack of rack or guard mounts. Lauf is unapologetic about this - it's designed to be a gravel racer rather than an off-road tourer or commuter - but if you're looking for a bike that can do the job of many, then the True Grit probably isn't for you.

The bike also uses a 100x15mm axle up front and a 142x12mm out back - that's pre-Boost mountain bike spacing chosen specifically for that reason, as it gives a wider variety of cross-country mountain bike wheelsets, though the brakes use new-style flat mounts at both ends. It goes without saying that the fork's steerer is a tapered unit and there's clearance for 700x45mm tyres too - you could probably squeeze some 650b wheels with fatter tyres in if you really wanted, but the bike has neither been designed nor tested around them. Talking of that, despite the low frame weight of 1.1kg for a large, the bike is tested to mountain bike standards, which adds some reassurance for anyone intent on giving it some stick. 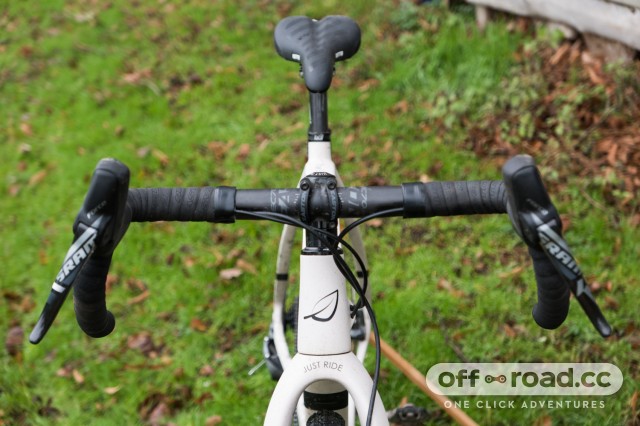 My test bike came in the mid-priced 'Race Edition' spec, which comes with a SRAM Force 1x11-speed groupset with hydraulic brakes and a 10-42T spread at the cassette. That's paired with finishing kit from Easton, such as the EC90 carbon cranks with a 42T ring, EA70 stem and lightly flared EC70 AX bar, though the WTB Volt Pro saddle sits atop a 27.2mm FSA SL-K carbon post. 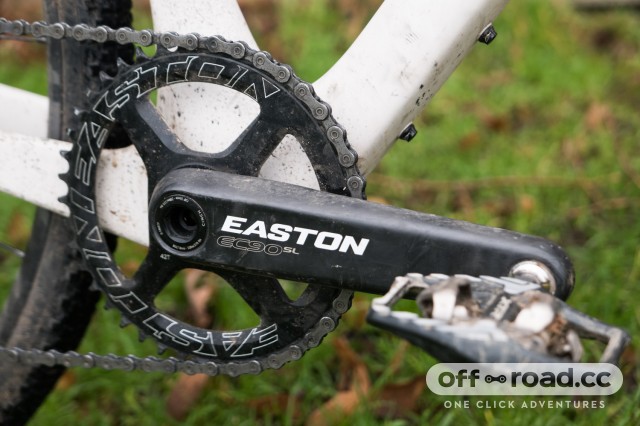 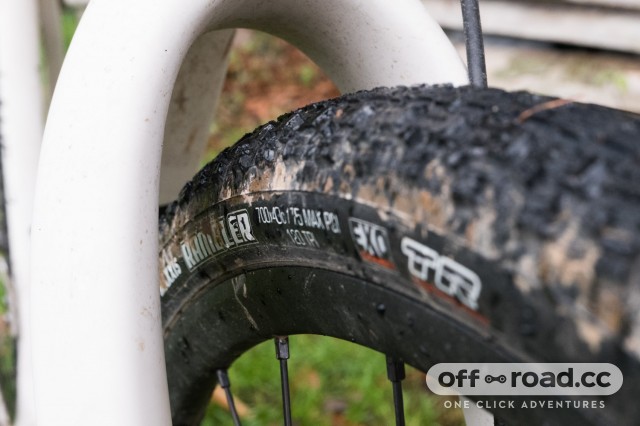 Fragile rubber aside and slightly narrow bar aside, it’s all stuff that works well and the all-in weight of 7.8kg (with tubes) for my small bike was very impressive. The gearing works really well off-road though the cassette can feel bit gappy on extended road sections. Another minor grumble really only relevant to UK riders is that the bike comes with the brakes set up Euro style - right hand operates the rear brake - so you’ll need to switch that over yourself as Lauf ships the bike directly from the factory to you, which allows the price to be kept as low as possible. 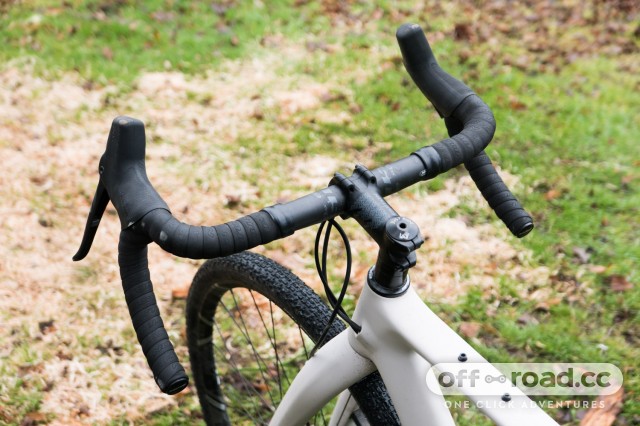 It’s this direct sales model that means the Lauf isn’t bad value for a top-end bike by any stretch, coming in $5,988 including tax and delivery to the UK - that equates to £4,714 or so at current exchange rates. Even before you factor in the unique fork, that compares reasonably well to established direct sales brands such as Canyon, whose Grail CF uses the ‘Hover bar’ to provide extra comfort, though not with a comparable effect on the trail. Relative to boutique, high-end bikes the Lauf represents very good value indeed, though all support is based in Iceland.

If you don't want a complete bike Upgrade in the UK offers framesets through independent bike dealers at £2,400 for the standard colours of Cream (as tested) or Midnight Blue, while custom colours are £2,700. 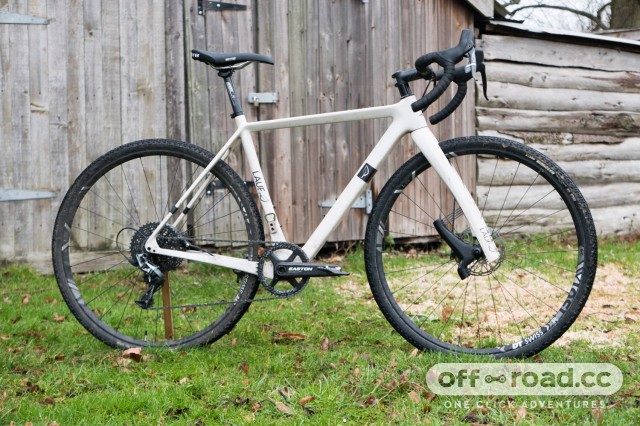 While it might be too focused for some, if gravel racing and riding is your bag at the expense of all-round versatility, then there are few bikes better at that task that the True Grit. The fork provides a genuine advantage in terms of comfort and control, which means it’s a reliable partner for serious distance racing without any of the downsides of telescopic fork designs, namely weight and static friction. The handling is really well dialled, striking a great balance between stability over rougher terrain but also a pert, agile feel.

The only real downsides I can think of are the fragile tyres - easily fixed - and the fact that you’ll need to ship your bike away should you have any issues. Apart from that, the True Grit is one of - if not the - best gravel dedicated bikes out there.