Skip to main content
Log In Register
Intense Primer S Pro 2020 review £5,699.00
A beautifully made and finished trail bike that offers wheel-size versatility, but the suspension won't be to all tastes 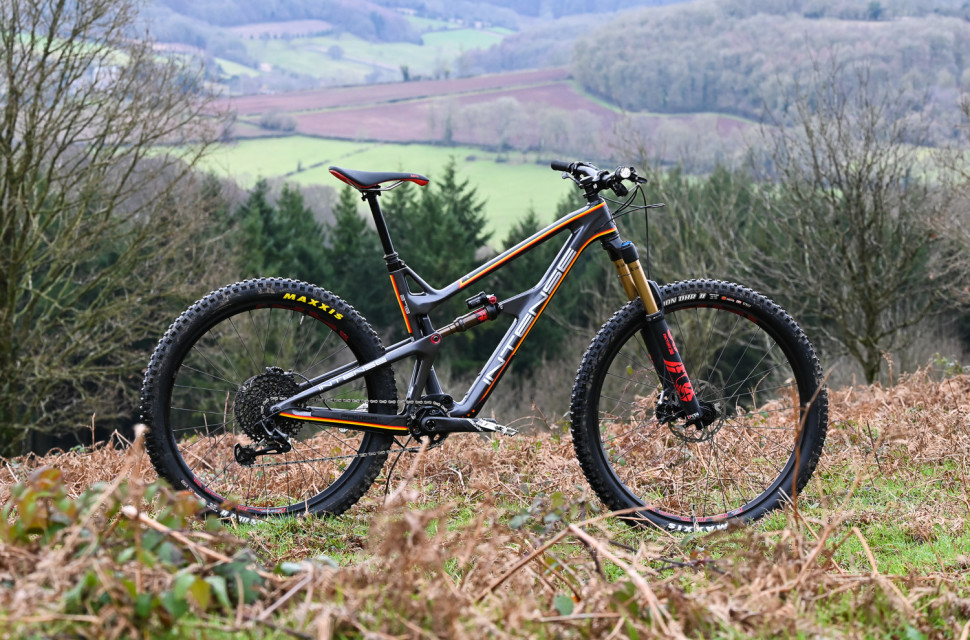 Intense's Primer S Pro marries a 29" wheel and 150mm of travel up front to 140mm of bounce and a smaller, fat tyred 650b wheel at the rear. It's a lightweight, good looking and high-end bike that offers a lot for the asking price, but the ride and suspension isn't quite as sorted as some similarly spendy rivals.

The all-new, carbon fibre framed Primer is Intense's replacement for their rather fragmented previous line up of trail bikes, with a number of different models being superseded by this bike. While simplified, it's still not quite simple, as the Primer itself comes in three different versions, with one sporting 29" hoops, one with 650b wheels at either end and this Primer S, which is the same frame as the 29" bike but comes with a big wheel up front and a smaller one at the rear.

This 'mullet' setup is having a bit of a resurgence at the moment and Intense reckons that this gives the bike superior grip at the back combined with "the speed and control" of the larger wheel diameter at the front - it was used on the Intense Tazer e-MTB we tested a while back. It's a bit of a current fad and one I'm not sure brings much substantially different to the party, but it's also possible to run 29" or 650b Plus wheels all around with some mild knock on geometry effects, should you wish to. 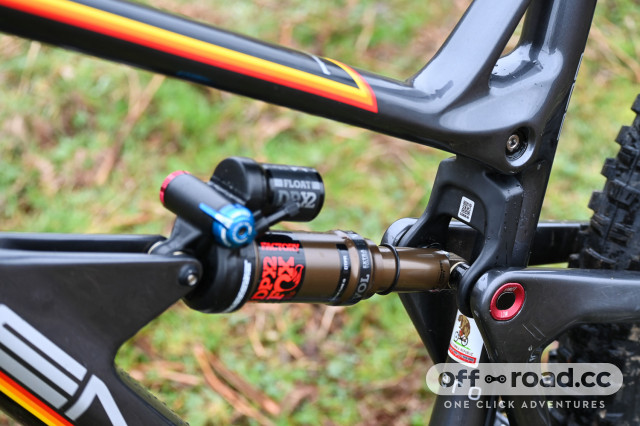 The frame does get some lovely details, with the all-carbon fibre frame having a composite upper link for the multi-link 'JS-tune' suspension system. There's also a neat flip-chip that drops the bottom bracket about 10mm with a corresponding slackening of the seat tube and head angles by around a half-degree. The titanium fasteners are also neatly hidden on the drive side of the upper link and a new rear triangle with a double brace is said to improve stiffness over the older, single-sided design. The paint - not decal - colouring is absolutely lovely and rubber protectors should do a good job of maintaining it like that too. 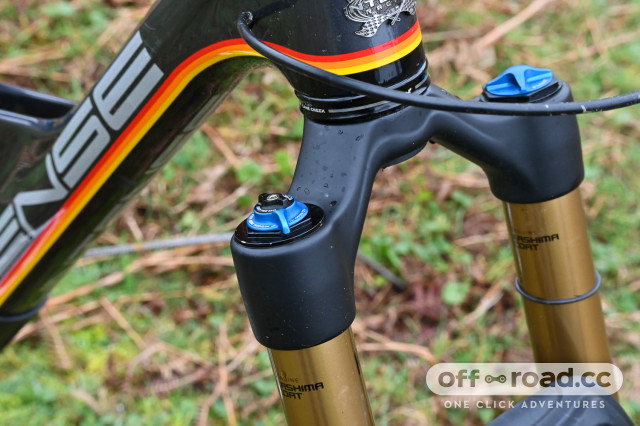 My test bike was the top-end Pro model, which means the piggybank has been smashed wide open and raided to dish up Fox Factory suspension units - a 36 with FIT 4 damper and a DPX2 shock - and 150mm Transfer dropper post plus a 12-speed SRAM drivetrain that mixes and matches X01 Eagle and GX Eagle bits along with a carbon fibre Truvativ chainset. Shimano provides the brakes, with a four-pot old-gen XT up front and a two-piston item at the back - these, like others we've tested, had a bit of a wavering bite point which didn't do much for confidence. 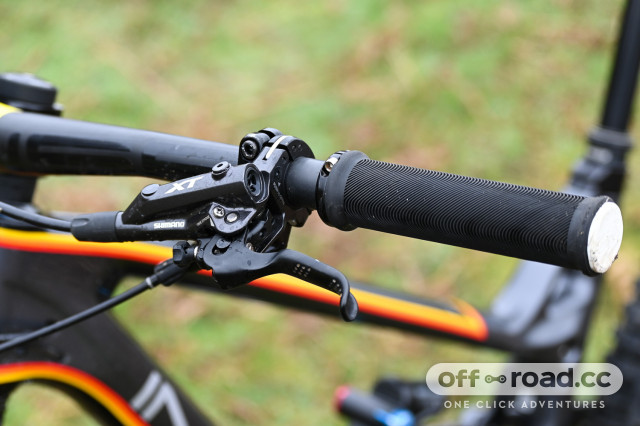 The wheelset is from e*thirteen, with a 35mm internal width at the back and a 30mm at the front. Stock Pro specification bikes come with a 2.8" Maxxis Rekon at the back and a 2.6" Maxxis DHR II up front, both in tubeless-ready, EXO+ reinforced flavour, but my test bike had a 2.6" DHR II at the back as well. 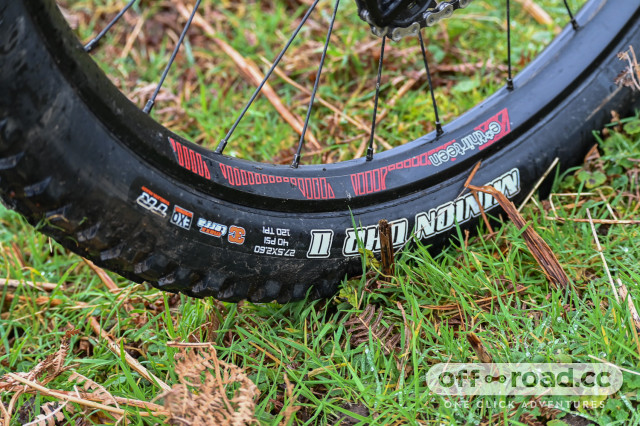 That tyre is infinitely preferable for soggy UK conditions but it did highlight the fact that there's not masses of mud clearance at the back, especially if you'll be running the fat rubber - it also dropped the bottom bracket even further, making pedal strikes more likely even in the higher flip chip setting. 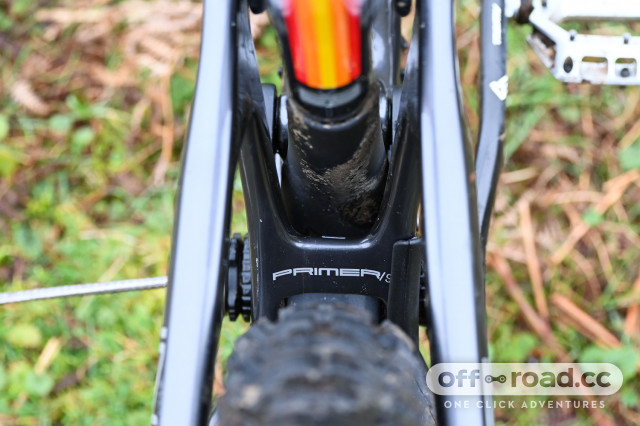 The bike is also fairly conservative when it comes to geometry, with a reach of 460mm for the large I rode, though a smidge less if you choose the lower shock position. At 65°, the head angle is pretty well sorted for a 150mm fork, but the heavily offset seat angle is more of an issue. 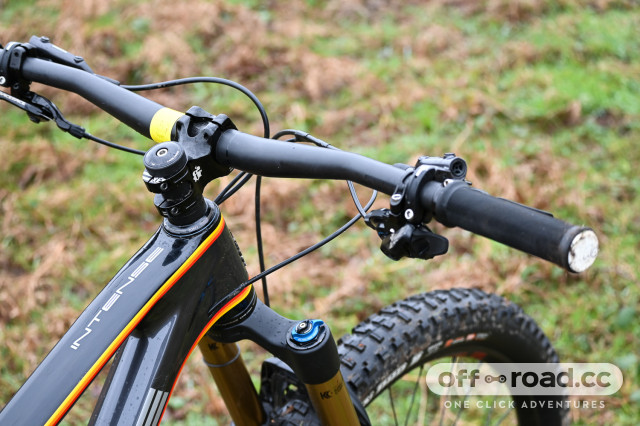 It's got a pretty slack 74° effective angle - modern trail bikes really feel best when it's a degree or two steeper than that - but the actual figure is 69.5°, meaning that your weight is getting really far over the back of the bike when the saddle is fully extended and you're climbing steep terrain. The higher the saddle goes, the more this is compounded, with the front end getting lighter and harder to keep on course as a consequence.

The rear suspension did slightly compound that - it's super supple at the start of the stroke and very progressive, which means there's not a huge amount of mid-stroke support, so it tended to sit pretty deep in the stroke when riding. Despite that, I struggled to get anywhere near full travel and I ended up running quite a lot of sag to free up useable travel, which meant the back end of the bike felt rather dead on the sort of terrain where you want to be pumping and pushing to drive speed. 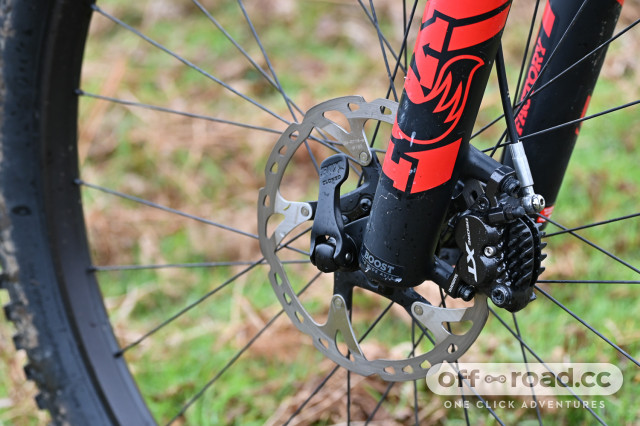 Swapping the shock's volume spacer to something smaller will help, but I found it hard to inject life and feel into the suspension when trying to hustle it through turns - though the pedalling manners and straight-line lump battering ability were good. Riders larger and heavier than my 68kg might get along with the back end's progression better, but I was carrying around suspension travel that I simply couldn't use a lot of the time and trying to tweak that and the lack of mid-stroke support out led to compromises elsewhere.

Still, the revised chassis felt nice and stiff without being harsh and the weight is low enough that all-day riding isn't an issue, while the low bottom bracket and fairly slack head angle mean carving through turns was a pleasure. The front-to-rear difference in tyre diameter wasn't hugely noticeable - certainly nowhere as influential as suspension or geometry in how the bike handled. 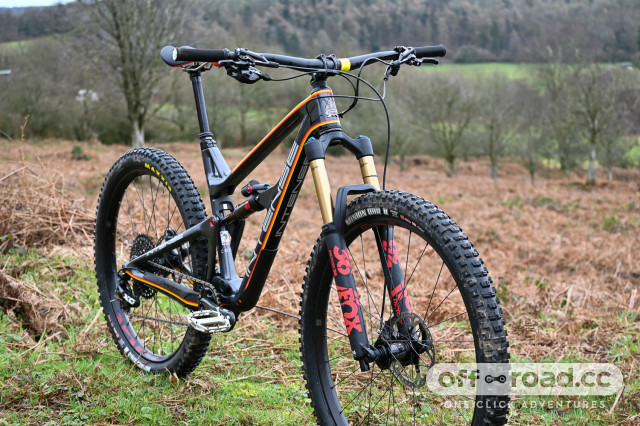 There was a slight difference in how and when either tyre would break traction and how it responded when it started sliding, but it was fairly princess and the pea stuff in real-world use. If you don't fancy messing about with two different sizes of tyre on one bike then you're probably not missing out. I could see the smaller rear wheel being of benefit to anyone who struggles with a full 29" setup due to getting their bum buzzed when they're right over the back of the bike though. 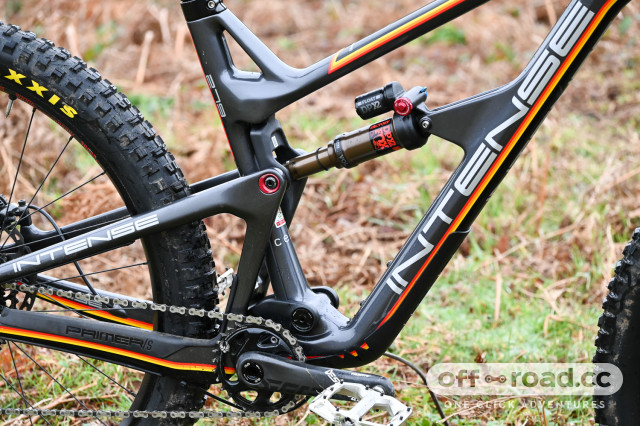 Intense has created a good looking trail machine with an excellent detailed, stiff and responsive chassis. It's decent value for the quality of frame and kit you're getting - if you could ever talk about a nigh on six grand bike in terms of value - but the rear suspension lacks the feel and support of the very best in class at this money and the slack actual seat angle means the riding position isn't as aggressive either.

It's not a bad bike by any means, however, and the after-sales support and setup from Intense is top-notch, with the bike coming set up specifically for your weight and riding style when it's sent to you, plus a toolkit and the option of extra parts that can be pre-fitted at checkout. It's a very capable fast trail bike for sure, but it's a cutthroat world at this end of the bike market and the Primer S feels like it needs a bit more sparkle in the ride and handling to make it really stand out. 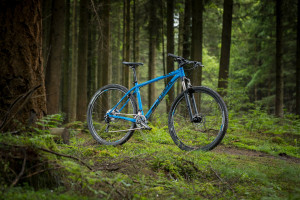